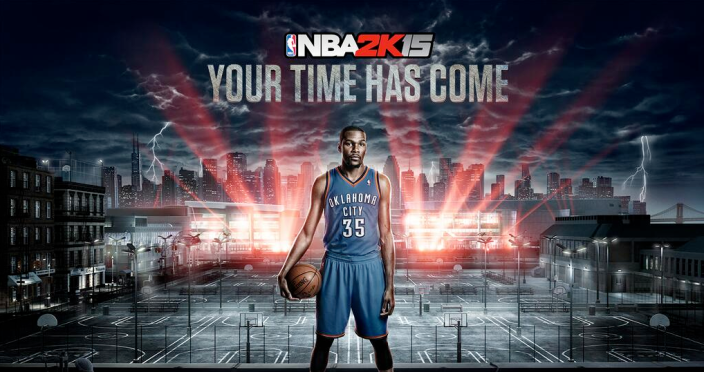 Following last week’s release of NBA 2K15 on consoles and PC, 2K has now released a version of its latest basketball sim for iOS. The venerable gaming company says it is its “most true-to-life NBA experience yet on mobile.”

The game boasts a number of improvements over last year, including “vastly” improved visuals and what 2K is calling “ultra-realistic NBA gameplay.” Head below for more details, pricing and the release trailer.

Along with updated graphics and gameplay mechanics, 2K has also added enhancements to the Quick Game mode and the full MyCareer option. Expect to see external controller support as well as customizable, virtual controls with 3 preset sizes/layouts.

Kevin Durant, the 2013 NBA MVP, will be replacing Lebron James as this year’s feature player. 2K has also tapped none other than Pharrell Williams himself to personally curate the new “eclectic” soundtrack. There are tracks from A Tribe Called Quest, Basement Jaxx, Death from Above 1979, Red Hot Chili Peppers, The Black Keys, Pharrell and many more.

NBA 2K15 is available on iOS now for $7.99. It is compatible with iPhone 5+, iPad 4+, iPad mini 2 and “will not run on earlier devices.” It is also available for Android at the same price. The My NBA 2K15 companion app for the console version is a free download on iOS.

Be sure to check out our daily round ups for all the best game/app discounts.

The NBA 2K franchise returns with NBA 2K15, our most true-to-life NBA experience yet on mobile. Featuring NBA MVP Kevin Durant and an eclectic soundtrack curated by internationally-renowned artist and producer Pharrell Williams, NBA 2K15 hits the court with vastly improved graphics, ultra-realistic NBA gameplay, and more. An authentic NBA adventure awaits! It’s up to you to claim your destiny. #YourTimeHasCome.

NBA 2K15 promises to deliver the most true-to-life NBA experience yet on mobile by capturing popular gameplay modes highlighting both the on-court and off-court excitement of the console version of the game.  Featuring NBA MVP Kevin Durant and an eclectic soundtrack curated by internationally-renowned artist and producer Pharrell Williams, NBA 2K15 hits the court with vastly improved graphics, ultra-realistic NBA gameplay, and more.

“With our latest NBA 2K15 mobile experience, fans have an opportunity to experience NBA action anywhere, anytime, in the palm of their hand,” said Greg Thomas, President of Visual Concepts. “We are thrilled to bring NBA 2K’s ultra-realistic gameplay and popular game modes to handheld devices.”

Headquartered in New York City, Take-Two Interactive Software, Inc. is a leading developer, marketer and publisher of interactive entertainment for consumers around the globe.  The Company develops and publishes products through its two wholly-owned labels Rockstar Games and 2K.  Our products are designed for console systems, handheld gaming systems and personal computers, including smartphones and tablets, and are delivered through physical retail, digital download, online platforms and cloud streaming services.  The Company’s common stock is publicly traded on NASDAQ under the symbol TTWO. For more corporate and product information please visit our website athttp://www.take2games.com.

All trademarks and copyrights contained herein are the property of their respective holders.

Cautionary Note Regarding Forward-Looking Statements The statements contained herein which are not historical facts are considered forward-looking statements under federal securities laws and may be identified by words such as “anticipates,” “believes,” “estimates,” “expects,” “intends,” “plans,” “potential,” “predicts,” “projects,” “seeks,” “will,” or words of similar meaning and include, but are not limited to, statements regarding the outlook for the Company’s future business and financial performance.  Such forward-looking statements are based on the current beliefs of our management as well as assumptions made by and information currently available to them, which are subject to inherent uncertainties, risks and changes in circumstances that are difficult to predict.  Actual outcomes and results may vary materially from these forward-looking statements based on a variety of risks and uncertainties including: our dependence on key management and product development personnel, our dependence on our Grand Theft Auto products and our ability to develop other hit titles for current and next-generation platforms, the timely release and significant market acceptance of our games, the ability to maintain acceptable pricing levels on our games, our ability to raise capital if needed and risks associated with international operations.  Other important factors and information are contained in the Company’s Annual Report on Form 10-K for the fiscal year ended March 31, 2014, including the risks summarized in the section entitled “Risk Factors,” the Company’s Quarterly Report on Form 10-Q for the fiscal quarter ended June 30, 2014, and the Company’s other periodic filings with the SEC, which can be accessed atwww.take2games.com.  All forward-looking statements are qualified by these cautionary statements and apply only as of the date they are made. The Company undertakes no obligation to update any forward-looking statement, whether as a result of new information, future events or otherwise.