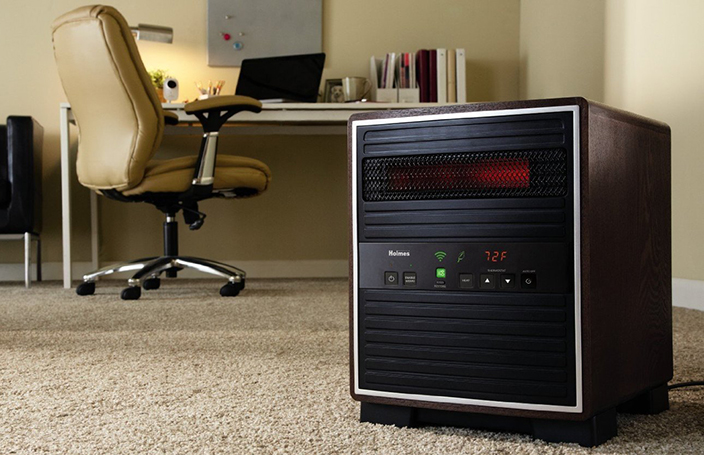 We’ve all done it, found ourselves in a panic about 10 miles down the road, wondering if we have left that little space heater on in our bedroom. Today, WeMo is teaming up with Holmes to bring its own solution to this moment of fear. The Holmes WiFi-enabled Smart Heater connects the popular home company with Belkin’s WeMo ecosystem. This adds another piece to the puzzle of WeMo’s expansive line of home automation products.

Holmes is also introducing a new Smart WiFi-enabled air purifier, which puts the focus on consistantly monitoring the air quality in your home and adjusting as needed.

We’ve got full details below on pricing and Holmes new Frost Protect feature on these heaters.

While controlling your heater was a quasi possibility with Belkin’s recently announced WeMo Maker, its new line puts the control consumers expect from a Nest Thermostat into a small package. The Holmes’ Smart Heater comes in two sizes, large and extra large, that push out different amounts of heat via its quartz bulb internals. It has everything that typically comes with a WeMo connected device: on/off, device monitoring and a programmable scheduled, which is all controlled through the WeMo app (iOS/Android).

The Smart Heater does take a few cues from other devices, particularly its ability to monitor the temperature within a space and activate when needed. A new “Frost Protect” mode keeps track of temperatures and fires up the heater when needed to discourage freezing, something that we suspect could be particularly valuable in basements during the winter.

Available in two sizes, the Smart Heater starts at $149.99 for the large size and goes up to $199.99 for the extra large version. It is available for pre-order from Amazon and Belkin directly, as well as other retailers in the United States.

purifier, which starts at a price of $199.99. This WeMo-enabled device has a seven day programmable schedule and can monitor the air quality in a room and adjust accordingly. The True HEPA filter is rated to remove “99.7% of airborne allergens” and the purifier itself is capable of alerting users when the filter needs changed. This new air purifier is also available today from Amazon and Belkin.

As we’ve mentioned before, it is no surprise that the smart home market is exploding with new products this holiday season. Belkin continues to team up with other companies by creating WeMo-enabled devices, such as the Mr. Coffee Smart Coffeemaker that in theory make controlling our homes easier. We look forward to the day when the market place has greater focus on quality rather than quantity in this area.