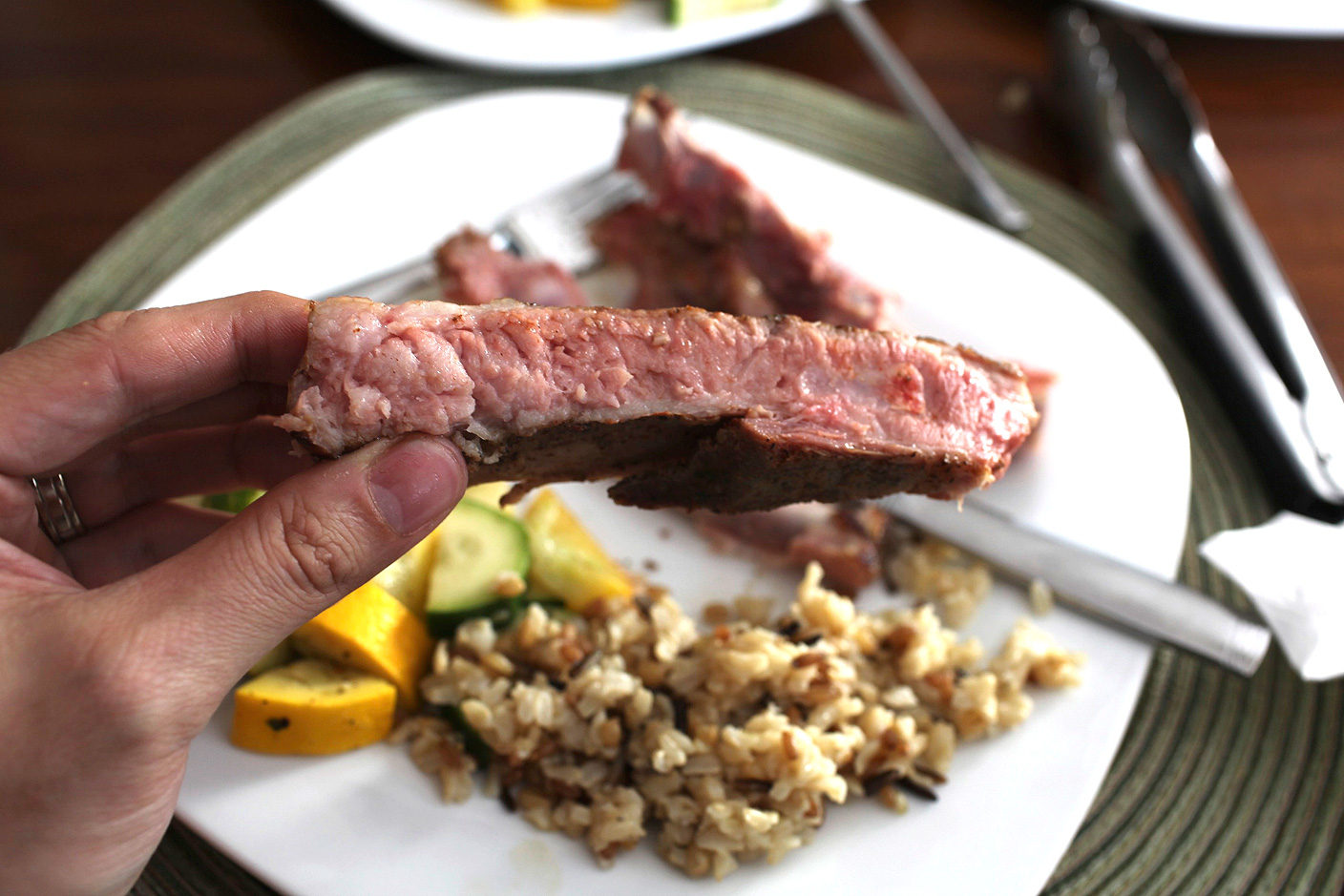 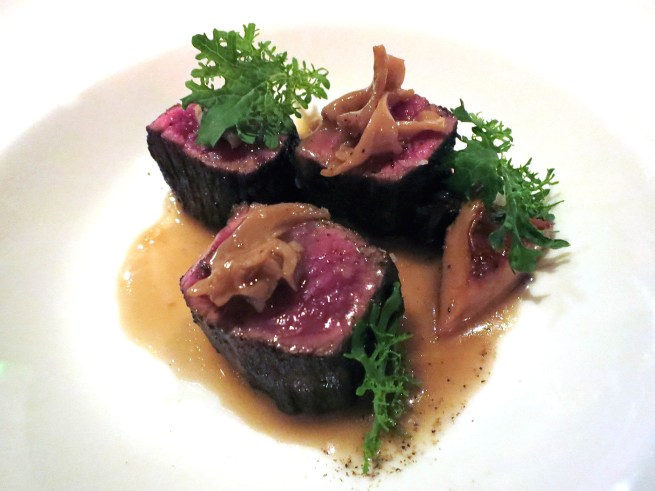 Last week, I debuted Kitchen Tech, a brand new 9to5Toys column designed to help you bring restaurant-quality dining into your own home. We were thrilled with the response to the first column on making magical ice balls for cocktails, so today’s column explores the opposite extreme: heating water in a precisely controlled way to get equally amazing results with vacuum-sealed bags of food. 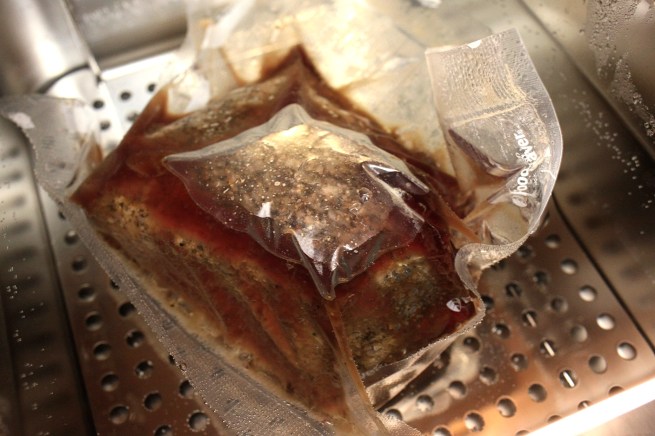 Some people call this sous vide (soo vee-d, “under vacuum”) cooking; others know it as cooking with an immersion circulator. Quietly used in restaurant kitchens for decades, sous vide cooking started to gain mainstream attention following the release of the avant-garde professional cookbook set Modernist Cuisine: The Art and Science of Cooking. Author Nathan Myhrvold ranks sous vide gear as the #4 and #5 most important modernist cooking tools in the newer consumer version of the book, Modernist Cuisine at Home, just behind a digital scale, thermometer, and pressure cooker.

In any case, temperature-controlled water baths produce the juiciest, most succulent meats you’ll ever taste, and can perform other magic tricks… like making perfect eggs, just-right vegetables, and rich, creamy sauces. Below, we’ll explain how sous vide cooking works, and show you how to do it at home.

The Concept: Safely preparing food requires balancing two factors — temperature and time. Cook something for three minutes at an obscenely high temperature using fire and it’ll be safe to eat, but typically super-hot (if not charred) outside and very dry inside. If you instead choose a much lower temperature and cook for a longer period of time in water, the food will still be safe to eat, but it will be tender inside and out. Vacuum-sealing the food in a bag keeps the flavor in and water out. 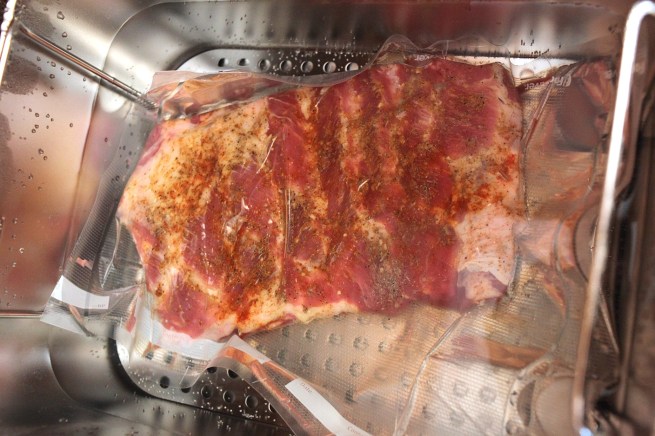 Historically, the challenge was accurately maintaining the low temperature for long enough to safely cook the food — an hour, two hours, or even two days. Professional kitchens purchased relatively expensive tools called immersion circulators that could be placed inside large basins of water, simultaneously heating and circulating the water to maintain a constant temperature. (PolyScience has sold pro-grade models in the $800–$1100 price range for years.) 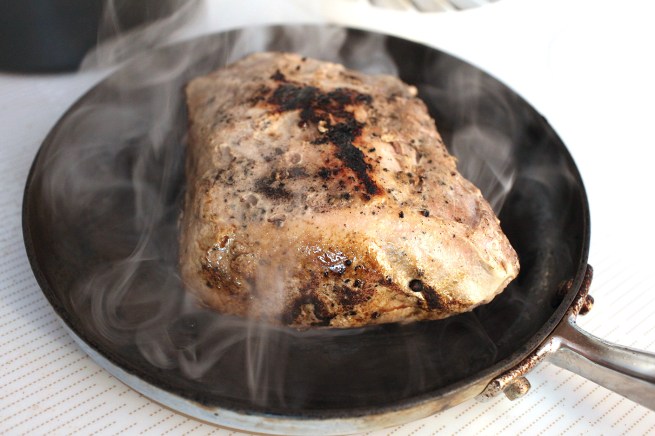 Steaks, ribs, chops, poultry, and fish could then be vacuum-sealed in bags, dropped into the water, and retrieved hours later ready to serve, all with minimal skill. Arguably the best sous vide trick is watching lower-end cuts of meat — skirt steaks, for instance — become as soft as filet mignon during the extended cooking process. This enables chefs to achieve a huge cost savings without compromising texture or flavor. 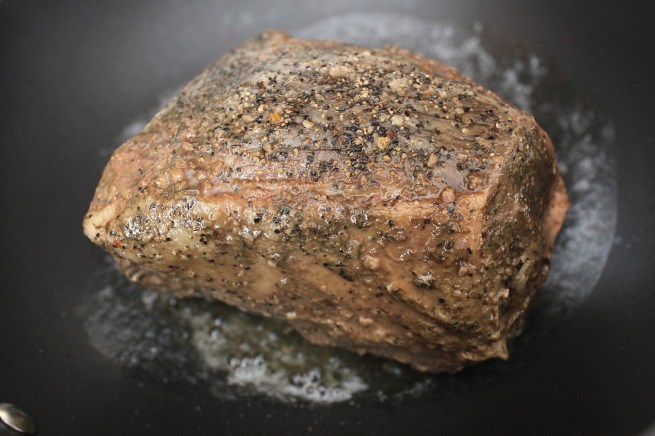 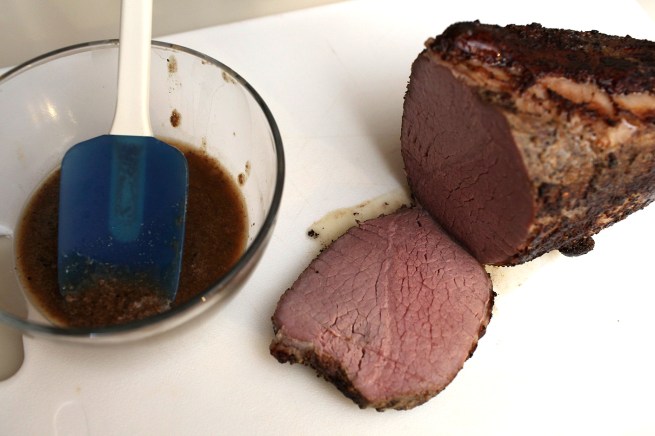 Sous vide cooking was the secret behind the impossibly tender cuts of meat served at top restaurants: chefs spent hours cooking the meat slowly, then put it under a kitchen torch or into a hot pan for a minute or so, browning the outside with just a little pleasant char. That browning is commonly known as the “Maillard reaction” today, and you can see above how Maillard-finished but sous vide-cooked cuts of beef look great – even in a home kitchen. 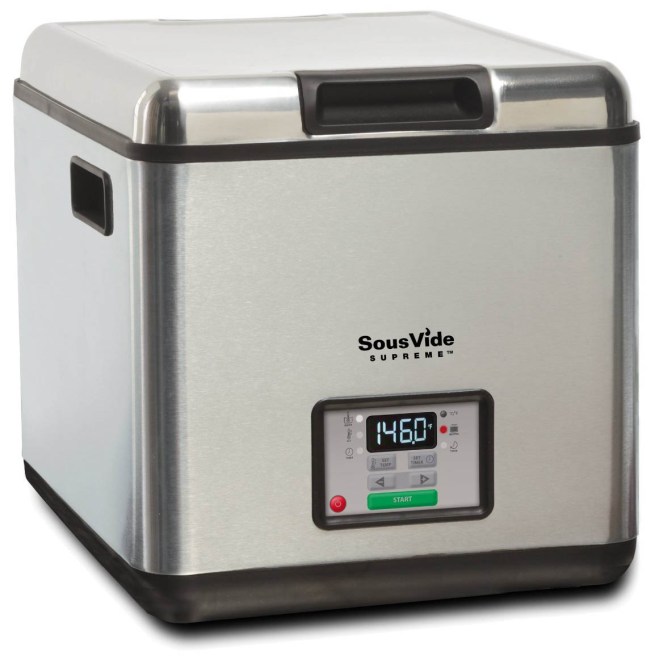 What’s New: Five years ago, Eades Appliance Technology introduced the SousVide Supreme ($479, available here for $350), which brought the lab-like sous vide cooking process into a microwave-simple countertop appliance. The SousVide Supreme is a silver stainless steel box measuring 11.4″ by 14.2″ by 11.4″, covering a temperature-controlled water bath with a lid. Rather than swirling the water inside, it evenly warms the bath — hence, it’s not an “immersion circulator” — while providing enough room to cook a large rack of ribs or multiple steaks in individual bags. Using up to 11 liters of water, it can prepare “approximately 20 four-ounce portions” at once, according to Eades. 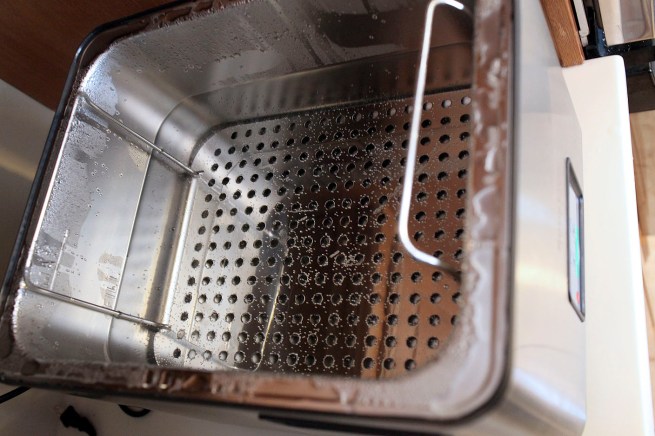 Shortly thereafter, Eades released the smaller (11.3″ by 10.96″ by 12.99″) SousVide Supreme Demi ($349, available here for $300), which is capable of holding 9 Liters of water and cooking “12 four-ounce portions” at once. Demi is currently available in black- or red-coated steel with a silver top. Two years ago, Eades debuted SousVide Supreme Chef / Professional, which has the same water and food capacities as the standard SousVide Supreme, but is a little larger and certified for commercial use at a much higher price of $749 (or $627 on sale). 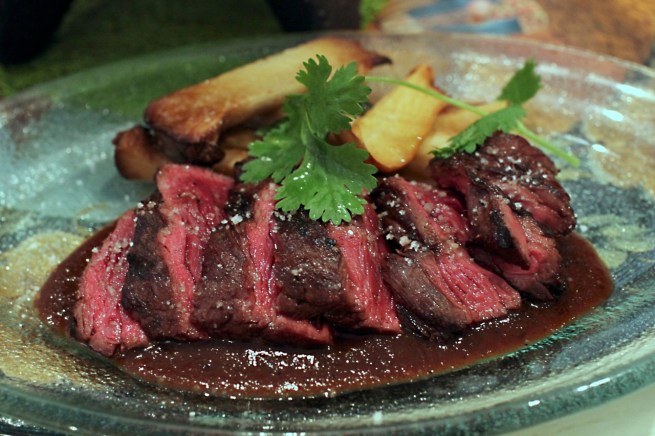 It’s worth mentioning that all of these units are completely silent, providing fairly easy-to-use temperature and timer controls on a front panel. You merely have to set your desired temperature, wait for the water to reach that level, then drop your sealed food bags into the water. If you want a timer to let you know when the food is ready, you can set it, but the sous vide process is very forgiving if you cook things for a little too long. 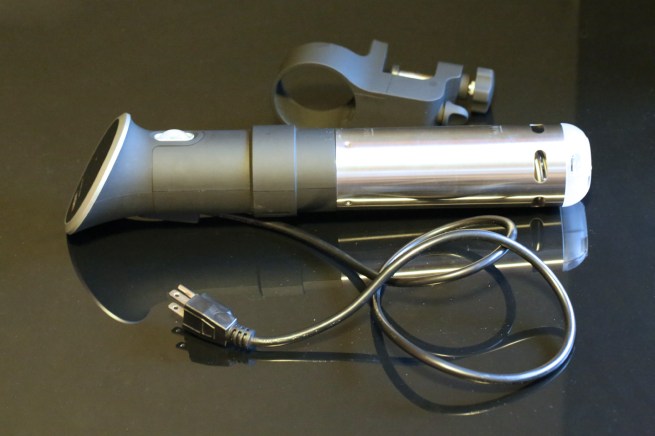 The success of the SousVide Supreme units has inspired a bunch of companies to release far more affordable immersion circulators for both home and professional use. Anova Culinary is arguably the best-known of these companies, having released multiple Anova Sous Vide Immersion Circulators. While they’re less expensive than the SousVide Supreme models, the pipe-shaped Anova models require you to supply your own water vessel, which you attach to the Anova circulator using an included clamp. Anova’s $179 model (shown above) was backed by a Kickstarter campaign and remains out of stock through early 2015, but its $199 Anova One model with a fancier color screen can be purchased today. They are very quiet, gently agitating the water while they hold temperatures within a half-degree of your preferred setting. 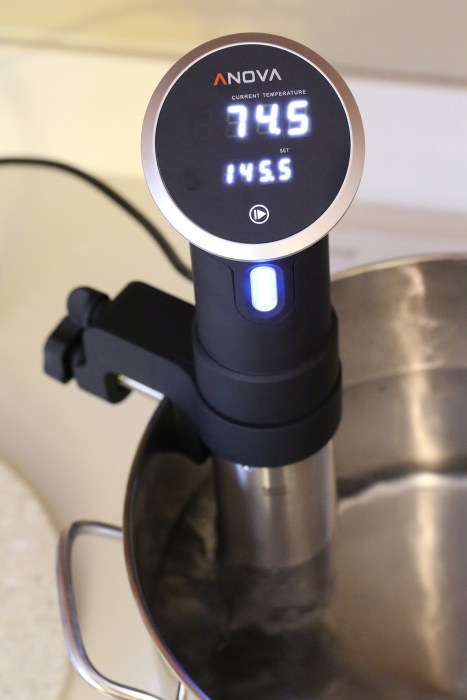 Regardless of the sous vide device you choose, you’ll need two other tools to go along with it: a vacuum sealer and a cooking torch to finish meats with the Maillard reaction. There’s no ideal inexpensive vacuum sealer, but we’d recommend the FoodSaver V2244 as a good $80 starter model, or the V3240 as a $120 step up. Our V2244 has worked reliably for years with FoodSaver 8″ vacuum bags. Professional chefs recommend the Iwatani Cooking Torch ($26) with these butane canisters to apply the correct level of fire without adding lighter fuel flavor to your food. You can also pan-finish most meats with a little butter or oil to achieve a similar (if uneven) Maillard effect. 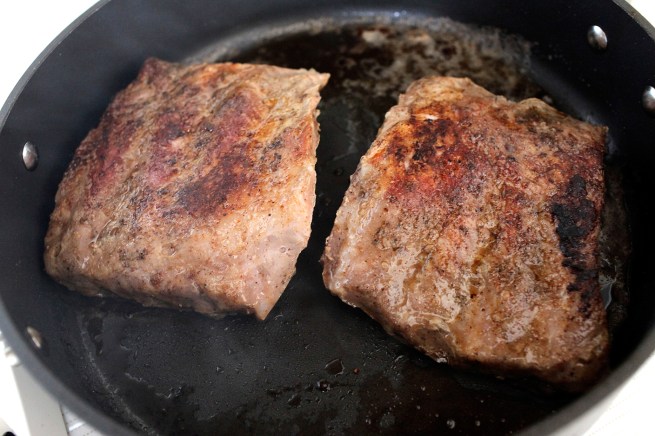 What Culinary Improvements Can You Expect From Sous Vide Cooking? With zero experience and little assistance beyond following temperature control guidelines like these, you will be able to cook “fall off the bone” ribs, the juiciest steaks you’ve ever had, and the softest, richest-tasting chicken or turkey imaginable. Sous vide seriously takes poultry to the next level, because cooking inside vacuum-sealed bags preserves and accentuates normally delicate natural flavors. This also means that you can use less of your favorite rub or seasoning and still achieve bold flavors, typically with deeper infusion into whatever you’re cooking. 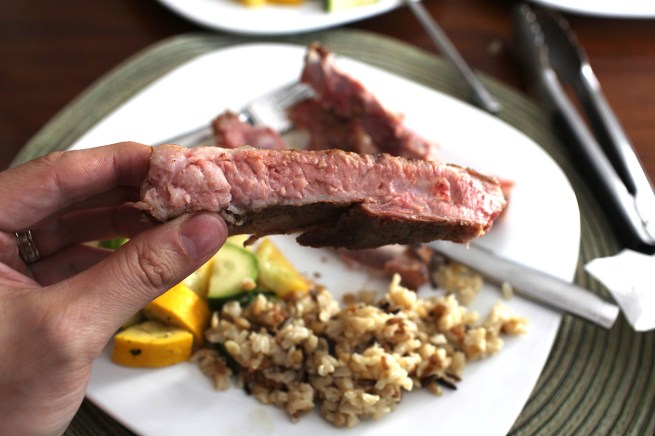 Rather than coming out gray and dry, red meat will be ever so slightly pink, but so long as you’ve followed the time and temperature guidelines, it’s safe to eat. Within the safe time/temperature ranges, professional chefs may debate which combination yields the ideal texture or flavor. This is why you’ll see different recommendations from chefs regarding the ideal temperature for cooking eggs: some (including famed French Laundry chef Thomas Keller) prefer the custard-like whites and liquid yolks of 63-degree (Celsius) eggs, while others go for softer or firmer textures. 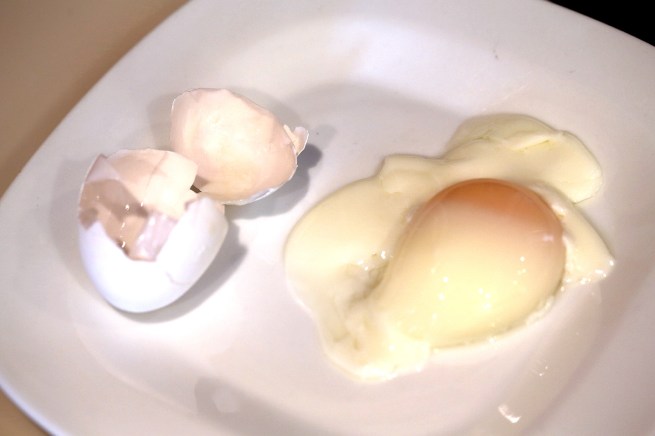 Here’s what the famously delicate 63-degree egg looks like after 45 minutes of prep time using an Anova immersion circulator: soft whites with bright, runny centers. You can cook eggs longer or hotter, gently solidifying the whites and yolks if you want them to be closer to a traditional hard-boiled egg, but sous vide enables you to achieve something ultra-delicate with minimal work. The results will be identical using any Anova or SousVide Supreme unit. 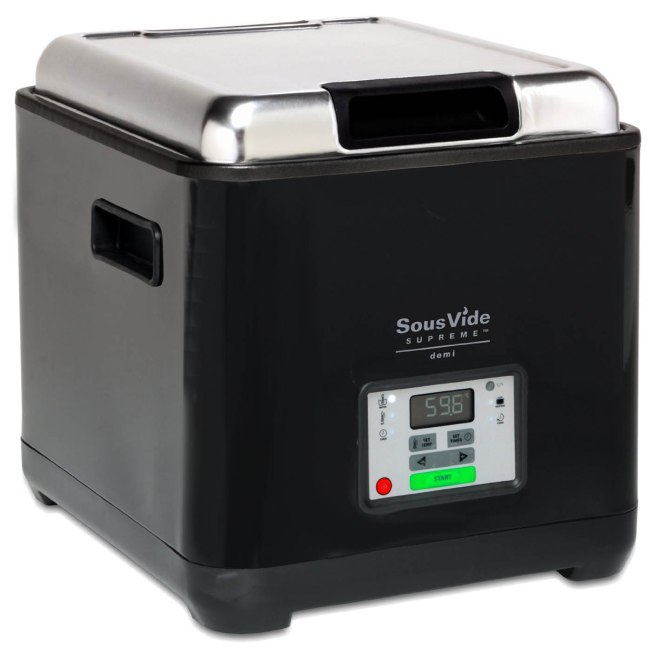 Our Recommendation: We’ve purchased multiple sous vide units for ourselves, family, and friends over the years, and for family-of-four home cooking, our favorite is the standard SousVide Supreme. If you’re cooking for one or two, the SousVide Supreme Demi will be just fine for your needs. Because both of these units are all-in-one, holding everything silently and cleanly in your kitchen, they create very little mess and are easy to scrub down. Unless you plan to cook in a professional kitchen, you don’t need the more expensive SousVide Supreme Chef. Most of the photos here are of actual items prepared in a standard SousVide Supreme, and they tasted even better than they looked. 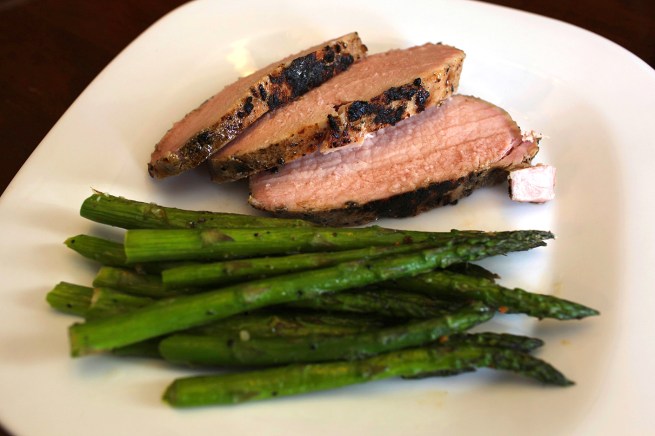 Generally, we would only suggest that you consider an Anova instead of a SousVide Supreme if you need the versatility of larger cooking vessels. While we really like Anova’s design, functionality, and pricing, it’s more of a DIY solution that leaves you to supply a large container and racks at your own expense, while the open pot of water continues to circulate in your kitchen for hours or days. You can choose the model that’s right for your needs; more experienced chefs will likely steer towards immersion circulators, while SousVide Supremes will be more like this decade’s microwave ovens — accessible to all with minimal need for extra parts.