LG introduces four new displays ahead of CES 2015, including a 21:9 curved UltraWide option

New Toy of the Day
Comments (1) 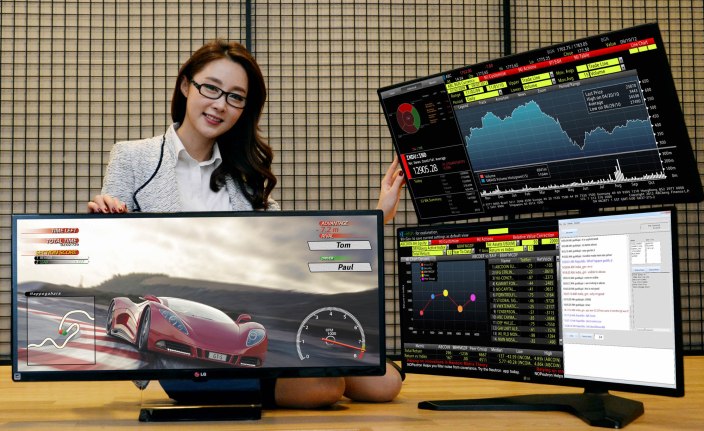 Prior to CES 2015 in January, LG has announced four new additions to its line of desktop displays with an emphasis on different needs for gamers, video editors and other professionals. The most intriguing to us is the LG34UC97 which brings a curve to a 21:9 UltraWide display. We’ve discussed Samsung’s upcoming curved widescreen offering and have advocated in favor of LG’s UltraWide display, so we expect this to be a nice marriage.

The “world’s first” curved 21:9 display will feature a native resolution of 3440 x 1440, a 178 degree viewing angle and will cover 99% of the sRGB color spectrum. Additionally, it will have Mac users covered with Thunderbolt 2 connectivity. Curved displays are said to offer a more natural experience when it comes to viewing, as the shape of the monitor matches the natural curvature of the eyeball. This enables users to have a greater peripheral vision of their workspace, whether it is video editing or gaming.

LG also has pushed out information on a few other displays as well, including a 21:9 UltraWide monitor designed specifically for gamers. The 34UM67 uses AMD’s new FreeSync technology which “eliminates screen tearing” caused by the monitor and graphics card being out of sync. If these claims from AMD hold true, this display offers an advantage for gamers over 16:9 displays allowing for a wider view of the action on games like Battlefield 4 and World of Warcraft.

Additionally, we will see a new 4K offering from LG (31MU97) that offers a greater than UHD resolution (4096×2160 vs 3840×2160) and an UltraWide solution (34UC87M) specifically aimed at those in need of more screen real estate such as financial advisors. Pricing on any of the aforementioned displays has yet to be announced.

We’ll have a full team at CES 2015 this January in Las Vegas keeping our readers up to date on the coolest technology announced this year.

SEOUL, Dec. 31, 2014 — LG Electronics (LG) will showcase its new 21:9 UltraWide monitor lineup at the 2015 International CES® in Las Vegas from January 6-9, highlighted by the world’s first UltraWide monitor compatible with AMD FreeSync technology to for fluid motion during fast gameplay. Based on IDC’s Worldwide Quarterly PC Monitor Tracker, LG is the world sales leader in this monitor segment, over the last seven fiscal quarters (as of Q3 2014) with a market share of 77.3 percent of the world’s 21:9 monitors.

LG 34UM67 is the company’s first 21:9 UltraWide Gaming Monitor specifically developed for graphics-intensive gaming. AMD’s FreeSync technology eliminates the screen tearing that occurs when the monitor and graphics card are out of sync. FreeSync technology guarantees the smoothest and most seamless gaming experience, generating fluid motion without any loss of frame rate.

“AMD FreeSync technology is an innovative monitor technology, based on free and open industry standards, to eliminate the tearing and stuttering that has plagued PC gaming for 30 years,” said Roy Taylor, corporate vice president of ISV/IHV Partner Group, AMD. “We are pleased that LG Electronics stands with us with truly exciting AMD FreeSync-ready displays like the LG UltraWide Gaming Monitor.”

The UltraWide Gaming Monitor also has an exceptional UltraWide field of view (FOV), allowing gamers to gain the upper hand by revealing hidden spaces that were invisible on regular 16:9 monitors. The monitor’s Black Stabilizer illuminates dark scenes and helps to clearly define the deep black areas where objects and enemies could be hidden. The Dynamic Action Sync mode minimizes input lag, making gameplay truly real time. Many popular games such as Battlefield 4, World of Warcraft and ArcheAge currently support 21:9 resolution with more games expected to support this resolution in the future.

LG’s curved 34-inch UltraWide monitor (Model 34UC97) in Quad HD resolution (3440 x 1440) makes maximum use of screen real estate. It allows creative professionals such as graphic designers or photographers to look at more images as thumbnails and media creators to see longer video image sequences or graphical representations of sound. Mac users will find the monitor particularly appealing as it is compatible with Thunderbolt™ 2, capable of high-speed bulk data transfers. The curved display further immerses users in their gaming experience.

Thanks to the 178-degree viewing angle of the In-Plane Switching (IPS) display which recreates colors across over 99 percent of the sRGB color space, there is no color distortion at any angle. The monitor’s color accuracy, viewing angle and sRGB color space have been certified by TÜV Rheinland and Intertek and also validated by UL.

The 21:9 Curved UltraWide Multi-Display (Model 34UC87M) provides various multiple-display set-up options, raising productivity levels for stock traders and other financial professionals who need to keep track of large amounts of data simultaneously. This monitor can be used as a trading workstation or a large dashboard to display charts, quotes or pending orders on each screen, allowing the user to explore a wider range of opportunities.

LG will also showcase the Digital Cinema 4K Monitor (Model 31MU97) featuring 4K resolution (4096 x 2160), with more pixels than normal Ultra HD resolution (3840 x 2160). Not only does it show 4K content as they were meant to be seen with native resolution, it is also well suited for handling Digital Intermediate (DI) processes. With over 99.5 percent Adobe Color Space, it is the ideal monitor for accurate color management.

“LG’s premium 21:9 UltraWide monitors are designed with the unique needs of consumers in mind,” said In-kyu Lee, senior vice president and head of the TV and monitor division at the LG Electronics Home Entertainment Company. “The industry has come a long way from the days when one display design was thought to be suitable for all users. With the amount of time we spend in front of monitors, there’s a lot of room for specialized monitors in our lives.”