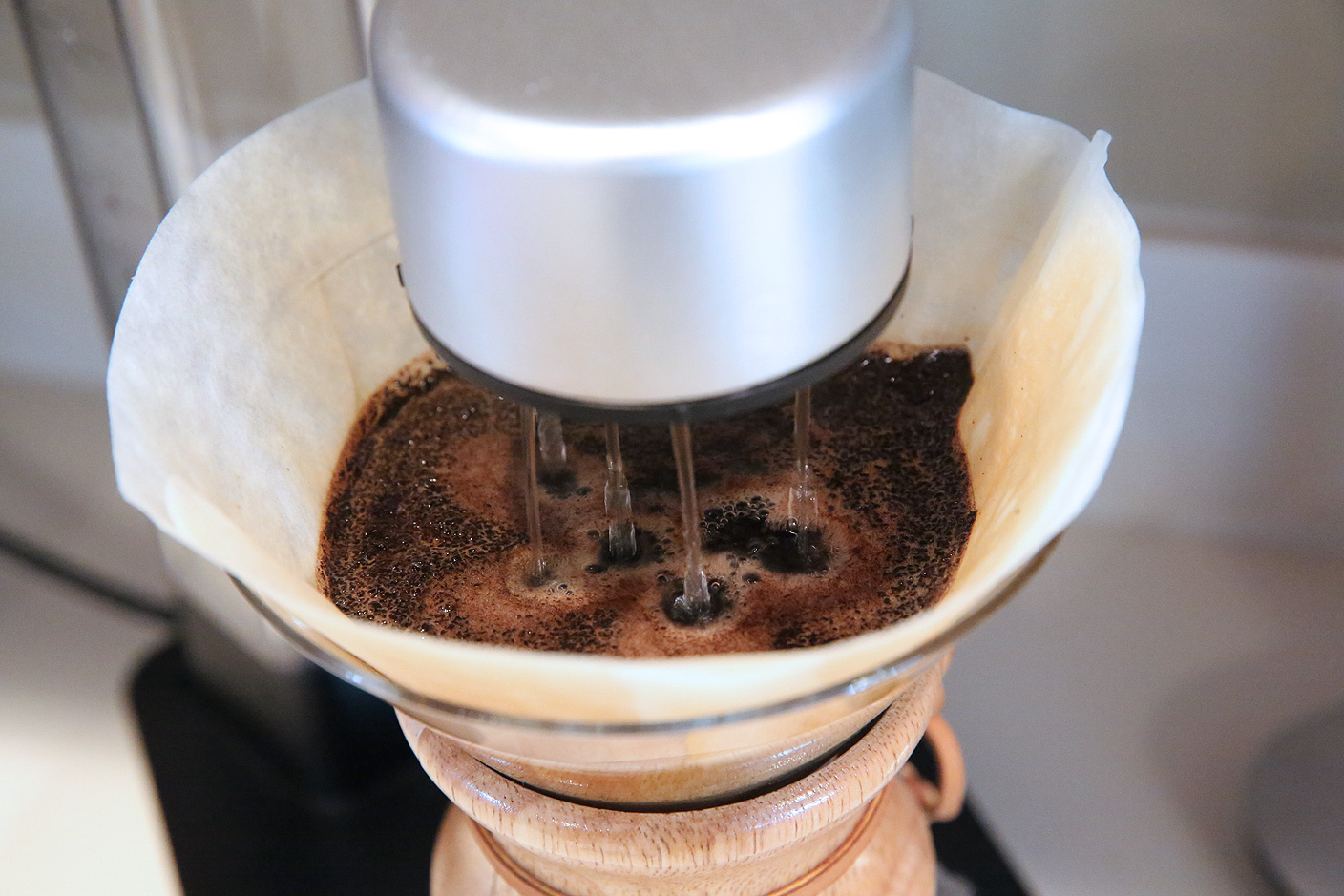 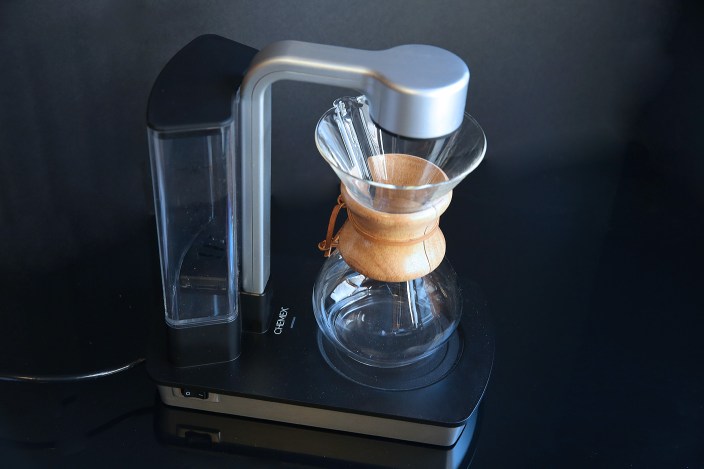 At a time when people are increasingly buying “natural” and “organic” foods, the word “Chemex” mightn’t sound like an ideal name for a maker of coffee brewing gear. Yet Chemex’s 1941-vintage Coffee Maker has spent decades as a gold standard for pour-over coffee: featured in the MoMA collection, this Bauhaus-inspired design combines an hourglass-shaped glass pitcher with leather-bound wooden grips and special paper filters, producing delicious coffee.

The Chemex process involves placing freshly ground coffee beans inside a Chemex-brand filter atop the Chemex-brand pitcher, then “pouring-over” hot water in a manner that guarantees optimal extraction of coffee from the grounds. Following Chemex’s instructions, identical coffee beans and water produce a noticeably better cup of coffee than the typical home coffee machine – the reason many coffee shops offer Chemex-brewed coffee at a premium. 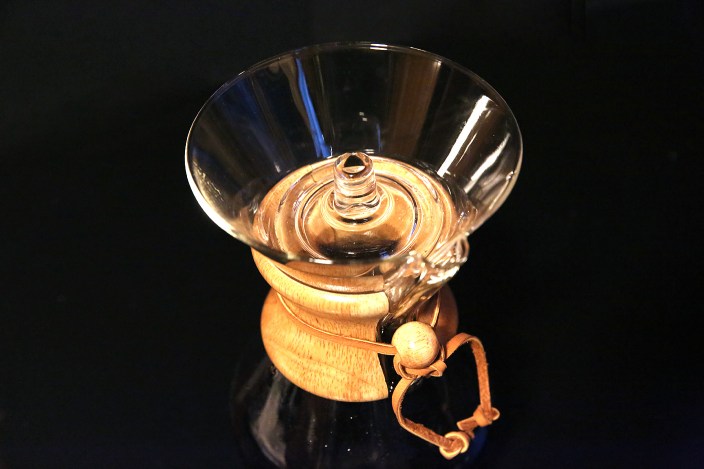 But traditional Chemex brewing requires learning, takes time, and demands a lot of user interaction: everything from hitting the right water temperature to the multi-step pouring process requires a lot more attention than just pressing the “start” button on a Keurig. While Chemex isn’t catering to the exact same audience, the company has acknowledged the value of a streamlined brewing process with this week’s release of Ottomatic ($350). Priced above top-ranked established coffee makers such as the single-cup Keurig K75 and small pot Bonavita BV1800, Ottomatic is designed to compete against premium metal and glass models such as the Wilfa Precision Coffee Maker — machines that are equal parts art and science. Chemex designed Ottomatic to look beautiful and radically simplify the fussy pour-over process. That’s exactly what it does. Read on for all the details. 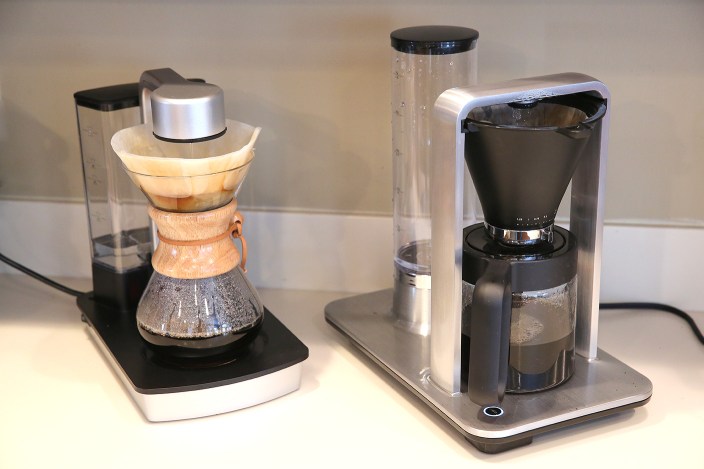 By traditional coffeemaker standards, Ottomatic has a very attractive design. Measuring 11.5″ tall by 11″ wide by 7.5″ deep, it combines a silver metal and black plastic base with a non-removable clear plastic water tank on the left, a silver metal sprayhead in the center, and a hotplate on the right. Unlike the typical Chemex process (boil water in a kettle, pour the hot water into the Chemex pitcher in two stages, then figure out how to keep the coffee hot), Ottomatic handles almost everything within its all-in-one design.

Using the included pitcher, you fill the tank with up to 10 cups of water, using lines that mark the 3-, 5-, 6-, and 8-cup points. You then place the pitcher on the hotplate and a coffee ground-filled filter inside the pitcher, flip a power switch on the base, and walk away for around six minutes. A light bar next to the hot plate switches from white to red while the coffee’s being brewed; there are no other indicators, dials, or switches to consider. (You can see the brewing process in action above.) 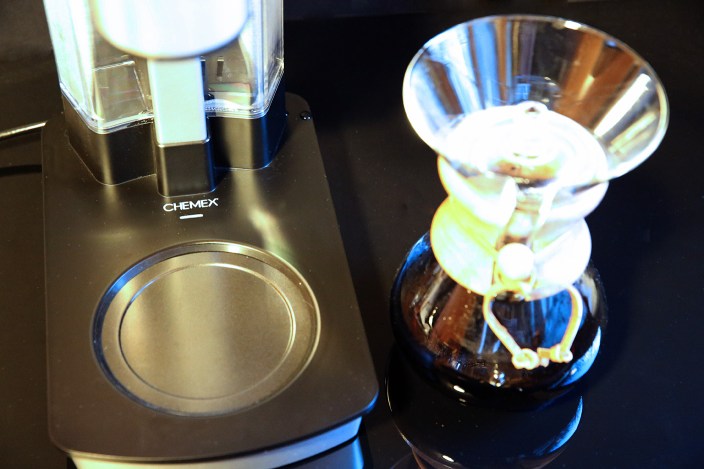 That also means that there are no temperatures to set: for better or worse, Ottomatic handles everything. Prior to extraction, it heats the water within a 197.6F to 204.8F range – comparable to the Bonavita’s 200-205F and notably hotter than Keurigs, which max out at a generally too-low 192F – then uses the hot plate to hold the coffee at 176F to 185F. Although there’s room to argue that different coffee beans may benefit from individualized prep temperatures, Chemex’s presets for extraction and holding are the optimal temperatures recommended by the Specialty Coffee Industry and International Coffee Organizations, respectively, and roughly match Wilfa’s settings for the Precision Coffee Maker. 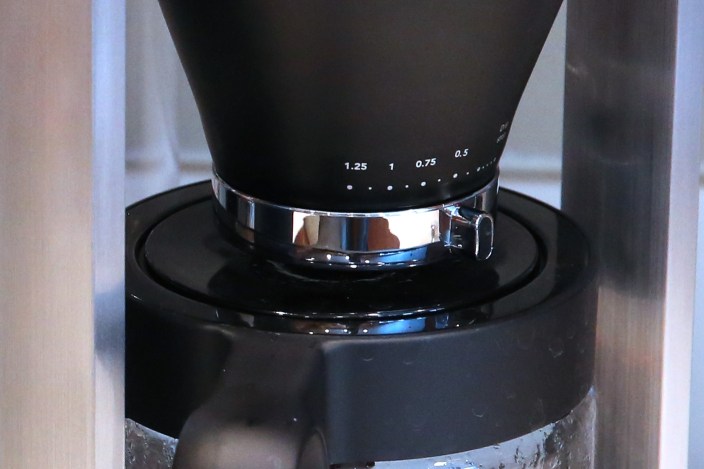 As shown above, the Wilfa model notably offers one adjustment: a dial that can adjust the coffee’s concentration relative to the amount of water in the tank. Chemex merely provides a paper manual with suggested gram and tablespoon measurements for the coffee grounds relative to either the water or brewed coffee. Serious coffee drinkers will already be familiar with both the dosage recommendations and how to tweak them, but it’s a small difference between these models. 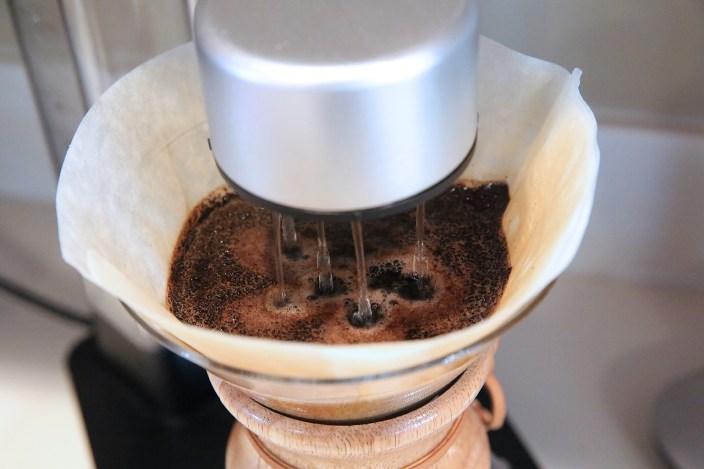 A critical feature of Ottomatic is the sprayhead, which replicates the process used to prime coffee grounds in a standard Chemex pitcher. Rather than just pouring a steady stream of water into the center of the grounds, Ottomatic wets down all of the grounds with hot water, pauses to let them bloom, then pulses the water through its shower-like head to maintain the temperature as coffee flows into the pitcher. The pulses alternate between one-head and multi-head drips, the latter with markedly wider dispersion of water than with the Wilfa, as our video above shows. Users of the classic Chemex know that the water-spreading process typically requires active involvement in the form of pouring, pausing, looking, then repeating those steps two or three times until all the water you’ve boiled is in the pitcher. Ottomatic makes this process simple, fast, and passive. 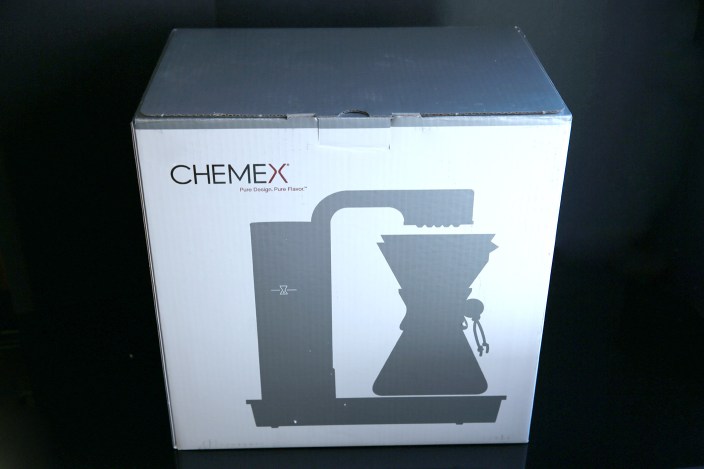 The typical Chemex brewer is an a la carte product, leaving you to select the pitcher size and type of filters you prefer for $50, give or take $20 based on your preferences. By comparison, Ottomatic arrives in a large white and silver box, bundled with a six-cup pitcher (normally $41.50, sold in multiple sizes at Amazon), starter packages of 5 Chemex circle filters and 5 Chemex square filters (typically sold in 100-packs via Amazon), a brew clip, and a glass pitcher cover (normally $6.50, available at Amazon). You can use any 3-, 5-, 6-, 8-, or 10-cup Chemex pitcher, and your choice of FP-1 (circle), FP-2 (half-moon), FC-100 (circle), FS-100 (square), or FSU-100 (square unbleached) filters with Ottomatic, if you supply those parts yourself. 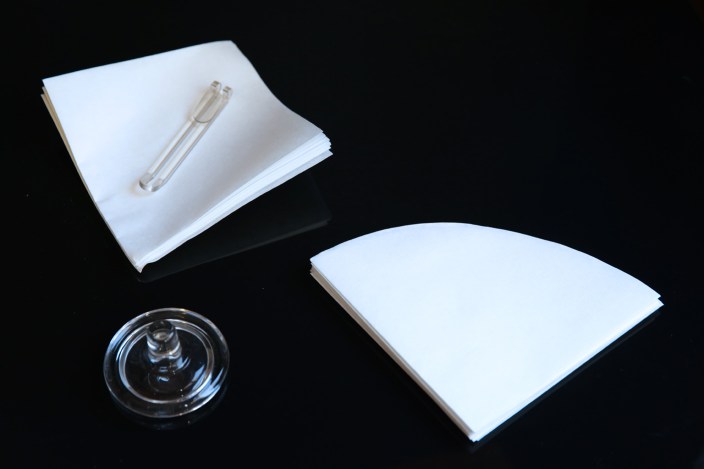 My guess is that your big question right now is whether Ottomatic is worth a $350 asking price, and on that point, the jury’s still out. Functionally and aesthetically, Ottomatic isn’t terribly different from the Wilfa Precision Coffee Maker, which can be purchased today for $250 in a jet black version or $330 in a much fancier aluminum. Both models stress simplicity over adjustability, automatically heating water to the same “considered optimal” extraction temperature range, and delivering what they claim to be “the right amount of water at the right time.” However, Wilfa’s basic paper filters are less expensive – only $5 for 100 – and its water tank matches Ottomatic’s in size, while the included carafe is larger. 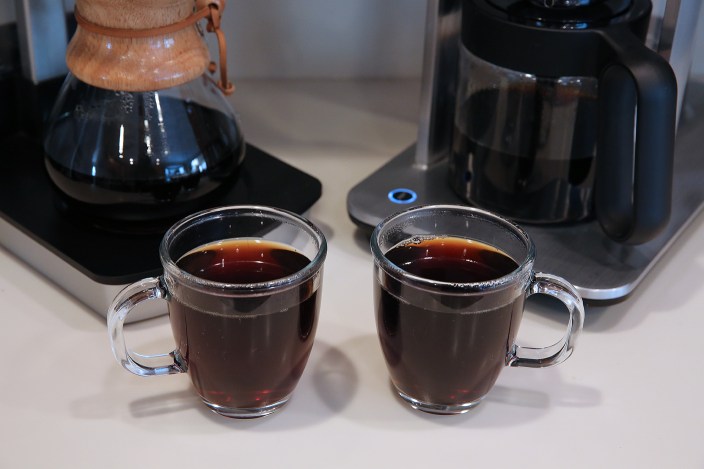 But in our taste-testing, Ottomatic produced somewhat better results: using identical coffee with an identical quantity of water, Chemex’s cup was smoother – roughly the same flavor and intensity, but less grit – a difference we’d chalk up primarily to Chemex’s filters. In other words, Ottomatic will be the best coffee maker for people who appreciate the particulars of Chemex’s pitchers and filters, and are willing to pay a fairly significant premium to automate an unquestionably tedious manual process. As it’s a brand new product, we’ll have to see about the long-term reliability and number of use cycles – whether it can stand up to the demands of coffee shop use – but our gut feeling is that Ottomatic will become a staple in the homes of serious coffee fans as soon as it becomes more widely available. (Pre-orders and same-day orders are shipping now from Chemex’s web site.) Ottomatic is not a mandatory purchase, but for Chemex aficionados, the valuable hours it saves versus manual hand-pouring may justify the steep up-front cost.

Want to learn about other professional-grade food and beverage solutions for your home kitchen? Read more of my Kitchen Tech columns and reviews here.