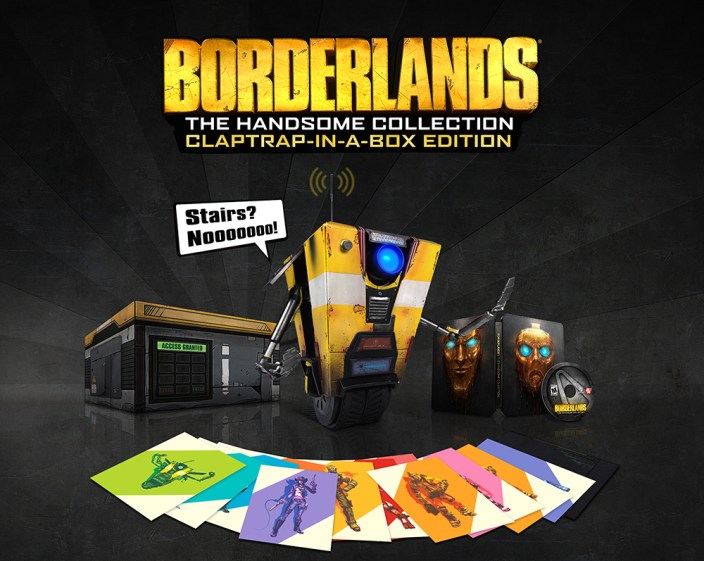 Some may have been disappointed when Gearbox announced the latest entry to the Borderlands series was coming in the form of The Pre-Sequel and only for last gen consoles, but today the company has unveiled the start of its next gen plans.

While not the brand new Borderlands game you were hoping for, the folks at Gearbox have announced a next gen version of Borderlands 2 and Borderlands: The-Pre Sequel coming to Xbox One and PlayStation 4 with the new Handsome Collection. This edition will also pack in the massive list of add-on DLC content for both titles (full list below).

Along with some cool new enhancements like updated visuals and 4-way couch co-op, we are also getting the Claptrap-in-a-Box Edition which brings the series’ titular character to life like never before…

This limited edition bundle, which is likely only of interest to the most hardcore fans of the shooter RPG franchise, will run you a gajillion dollars ($399) but it happens to come with a mini, smartphone connected Claptrap robot.

Have you ever looked at a Claptrap unit and thought “Gee, I really would like to be able to have one of my own personal beyond annoying sidekick robot that suffers from insecurity and low self-esteem issues and whose entire self-worth is validated by the attendance of friends at pizza parties?” We thought so, too! That’s why Hyperion is proud to give you your own remote-controlled Claptrap!

The remote-controlled Claptrap operates on PCB gyro tech which allows him to be balanced on one wheel and controlled via the companion iOS and Android apps using a joystick or motion controls. The bot is also equipped with a camera in one eye, which allows you to remotely view the stream from inside the app, as well as the ability to “talk into your mobile device and project your voice through the robot.”

Other goodies included in the Claptrap-in-a-Box Edition are as follows:

By limited, we mean 5,000 copies. Pre-orders are set to go live today and we are already seeing an early listing on Amazon. The Borderlands: The Handsome Collection and Claptrap-in-a-Box Edition are set to release March 24, 2015.

DLC packs included in this bundle: