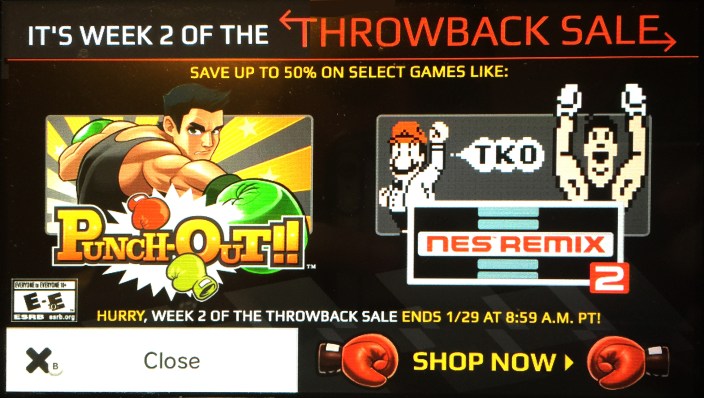 Following last week’s mega-sale on Super Mario Galaxy 2 for Wii U, Nintendo has just launched round two of its Throwback Sale for Wii U and Nintendo 3DS. As before, you have one week to grab one steeply-discounted Wii U title from Nintendo’s eShop, plus smaller discounts on several Wii U and 3DS releases.

The star attraction is Nintendo’s Wii U version of Punch-Out!!, a straight port of the 2009 Wii release offered for $9.99 (reg. $20 digital, discontinued but selling for $60 on disc). Punch-Out!! is a well-regarded sequel to the classic arcade, NES, and SNES franchise, where boxer Little Mac fights a huge collection of cartoony opponents. Also available for the next week at reduced prices are:

Next week, Metroid Prime Trilogy will become available for the Wii U, followed by Sin & Punishment 2 and other Wii games. Some of the Wii ports will no longer require special Wii controllers to play on the Wii U; others (including Super Mario Galaxy 2) unfortunately do. Check out our Wii U Buyers’ Guide for recommendations on the right Wii U bundles, accessories, and games to purchase, as well as our daily gaming deals for additional discounts. Pre-order deals for Kirby: The Rainbow Curse ($50) and Mario Party 10 ($50) are amongst many we’re currently tracking!