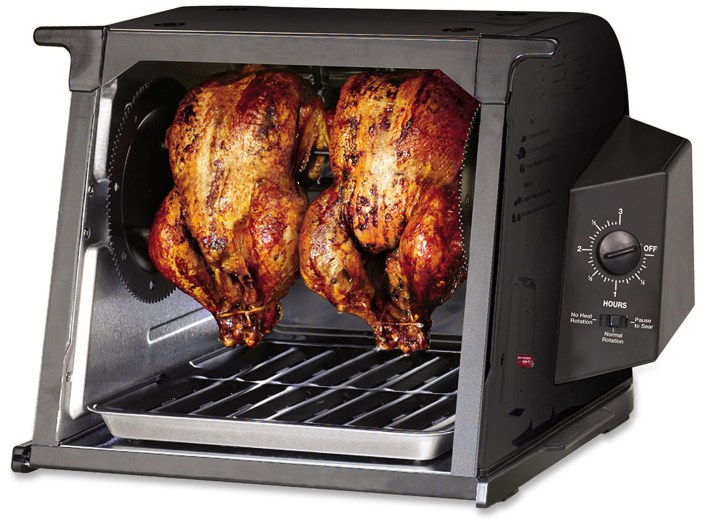 Eight years ago, the Showtime Rotisserie Oven went from being the punchline of a joke to one of the best tools in my kitchen. Aggressively pitched in late-night Ron Popeil infomercials with the tagline “set it and forget it” — a catchy phrase that quickly made its way into the popular lexicon — the Rotisserie’s value as a cooking tool didn’t get as much attention as its marketing.

I’d like to fix that in this week’s edition of Kitchen Tech. As the pitch suggests, the Showtime Rotisserie is a dead-simple cooking tool, and as we learned after receiving one as a gift from my mother-in-law, it also happens to make outstanding, restaurant-quality roasts and poultry. Much larger versions are used to prepare large quantities of poultry and meats in restaurant kitchens; the countertop-sized Showtime is designed for four- to six-person meals. It’s even easier to use than the sous vide machines we’ve covered, and over nearly a decade of use, we’ve never had to replace a single part. Read on for how it works, and why it continues to be a favorite tool in our kitchen. 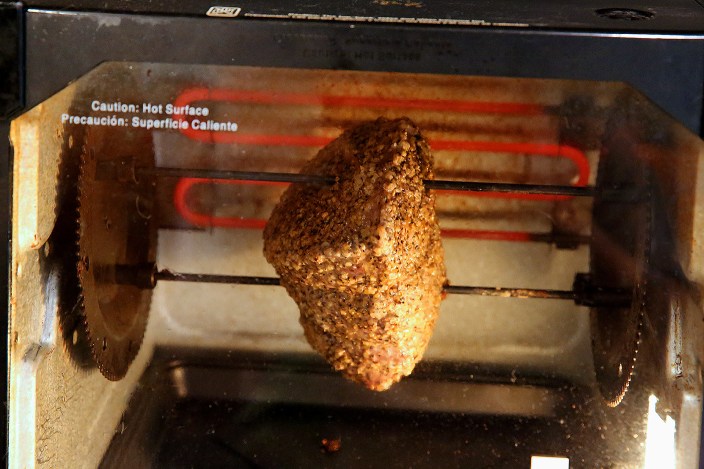 Each version of the Showtime Rotisserie works in the same way. There’s a timer outside, a hot lamp inside, and a spinning rotisserie spit in the center. The spit splits into two large gear-shaped circles connected with two non-stick metal bars, which you use to double-spear a large piece of meat, a whole chicken, or a turkey. After reassembling the spit, you place it in the center of the oven, close a glass front door, and set the timer for up to three hours of cook time. Come back after an hour or two, and your main course will be ready to eat — hence, “set it and forget it.” 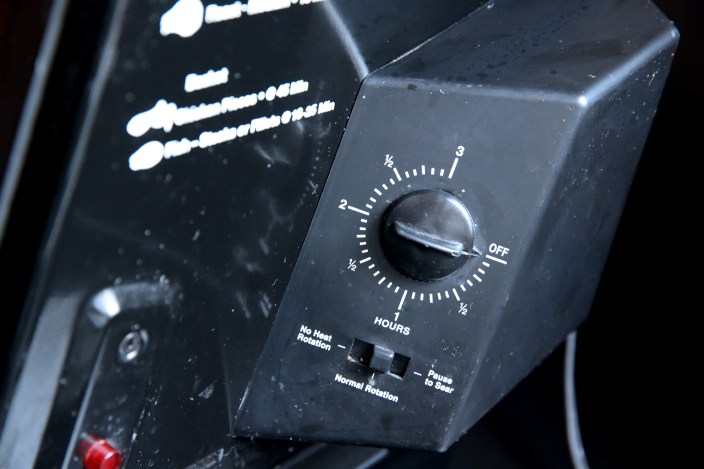 Basic time-to-cook guidelines are printed on the side for easy reference, and a manual is included for different types of meats. There’s no temperature setting to change, no baking pan to worry about, and — unless you want to do so — no additional preparatory work to be done. To ensure that everything’s cooked evenly, your meat rotates around over and over again, with liquids and fat falling off into a drip pan at the bottom. Cleaning is typically as simple as washing the pan and the metal rotisserie, though you can wipe down the inside of the cooled-down oven in the rare event that something gets on it during cooking. 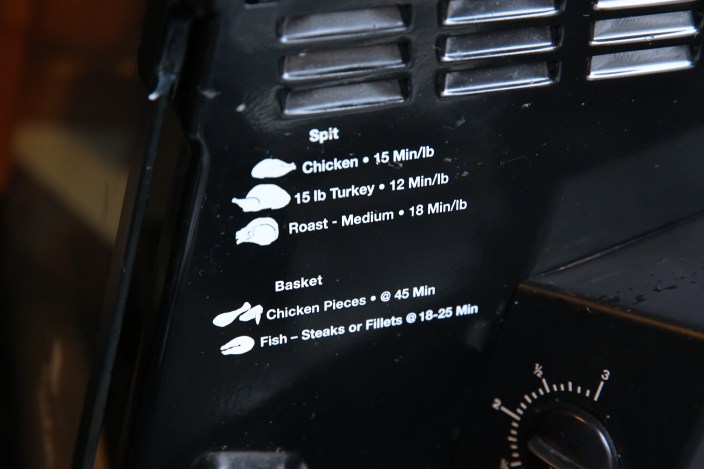 I’ve cooked everything from standard beef and pork roasts to ribs, chicken, and turkey in our Showtime unit, and the results have been consistently excellent. Achieving restaurant-caliber quality typically requires little more than application of a rub for meats or soaking in a marinade/brine for birds. Combined with the heat from Showtime’s lamp, the rub or brine creates an exterior texture that’s strong in added flavor and slightly crispy, while the interior is invariably tender with the natural taste of meat or poultry. 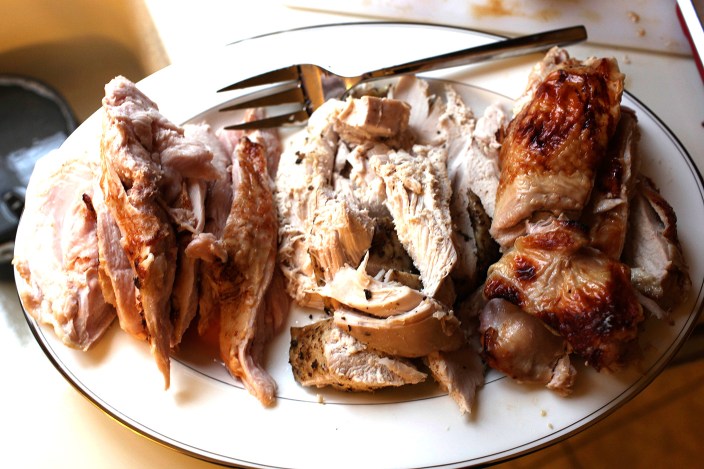 One of the best Thanksgiving turkeys we ever had was a large boneless breast that was honey-brined and Showtime-cooked — only the very best conventional oven-prepared turkey we’ve made was better. Yet the Showtime uses one-third the energy of a typical oven, and occupies far less space. 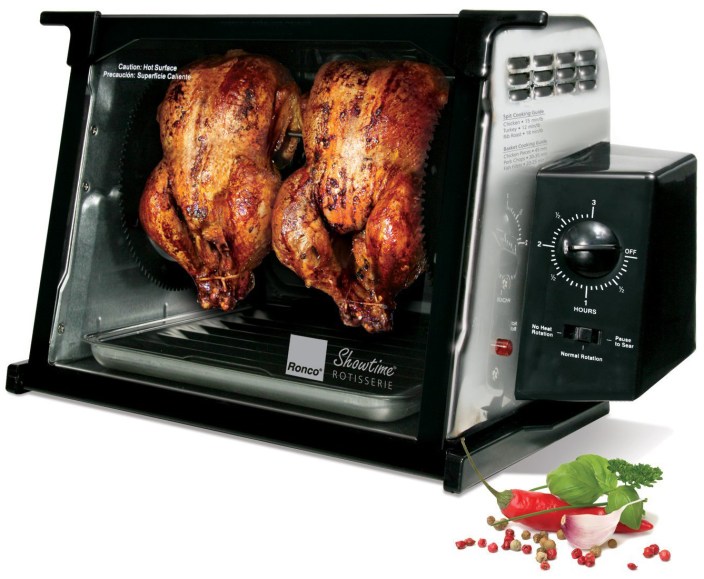 There are currently three versions of the Rotisserie. The one I have is the current entry-level model, the 4000, which is offered in all-black (as shown) or a combination of stainless and black. It has a $150 MSRP but can be had for under $130 (including free shipping) on Amazon, the best price we’ve seen anywhere. 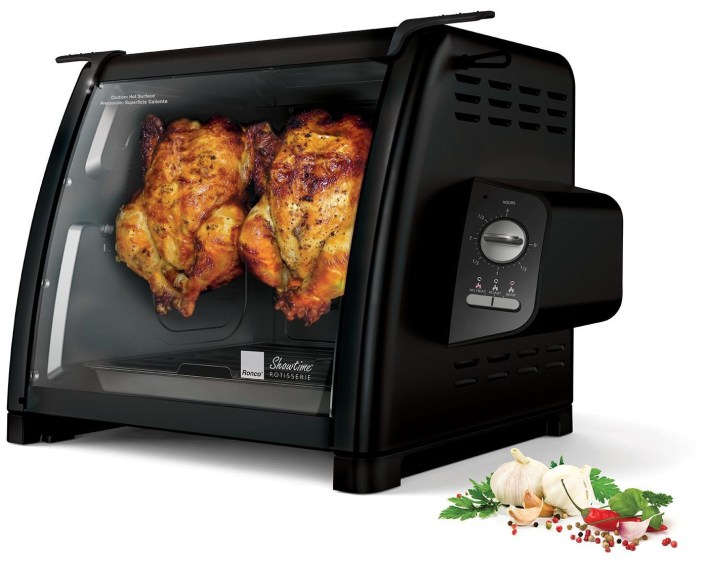 A fancier version called the 5500 also sells in an all-black version, with a nicer-looking all-stainless alternative. It’s a half-inch deeper and 3/4-inch taller than the 4000, but apart from cosmetics works the same way, and includes the same packed-in items. It can be had for just under $200 on Amazon, but Target offers the stainless model for $160, and Walmart currently has the black version for only $141 shipped, the best prices we’ve seen. 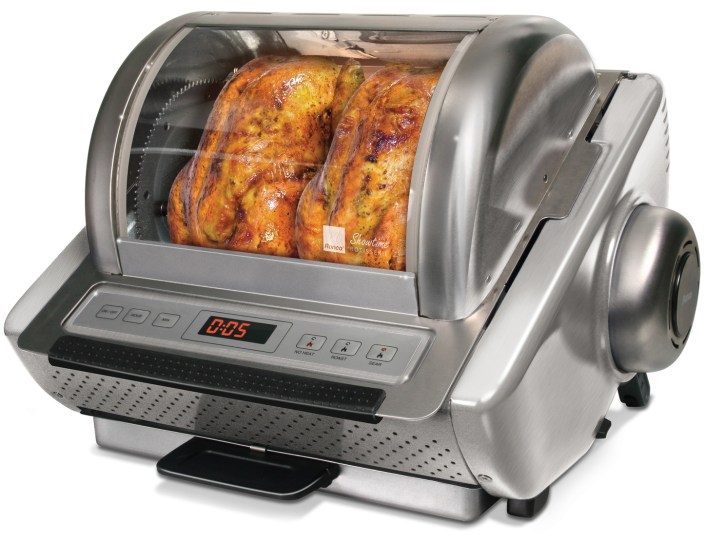 Finally, the most different-looking version is the 5250, which is called the “EZ-Store Rotisserie” because it can be disassembled for easier storage. While it’s 3/4″ narrower and 1/2″ shorter than the 4000, it’s also 3/4″ deeper, and doesn’t use the same sort of drip pan. But you can pull off the top half and rest it in the bottom half to fit inside a cabinet drawer, and it swaps the analog right-side timer of the 4000 and 5500 models for a digital version. Normally $180 at stores such as Walmart, it can be had for $160 shipped through Amazon if you want the stainless steel version. 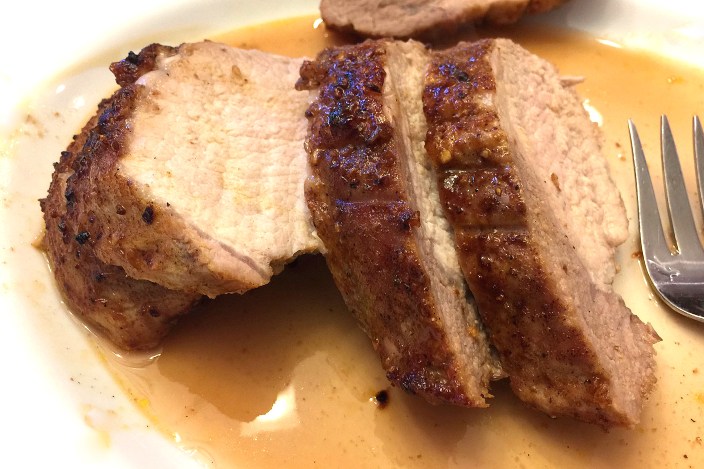 The Showtime Rotisserie Oven isn’t the fanciest or most modern of the tools we’ve covered in Kitchen Tech, but it’s a great tool for making restaurant-quality food at home. We’ve found the inexpensive 4000 to be more than enough for our needs, and don’t plan to replace it any time soon. Only spend more than the base model if you really prefer the all-stainless design of the 5500 or need to reduce storage space like the 5250.

Want to learn about other professional-grade food and beverage solutions for your home kitchen? Read more of my Kitchen Tech columns and reviews here, including

Column 1: Up your drinking game with magical ice ball makers, which transform everyday drinks into classics.