Scribd adds more than 10,000 comics to its unlimited eBook service, get a free trial now 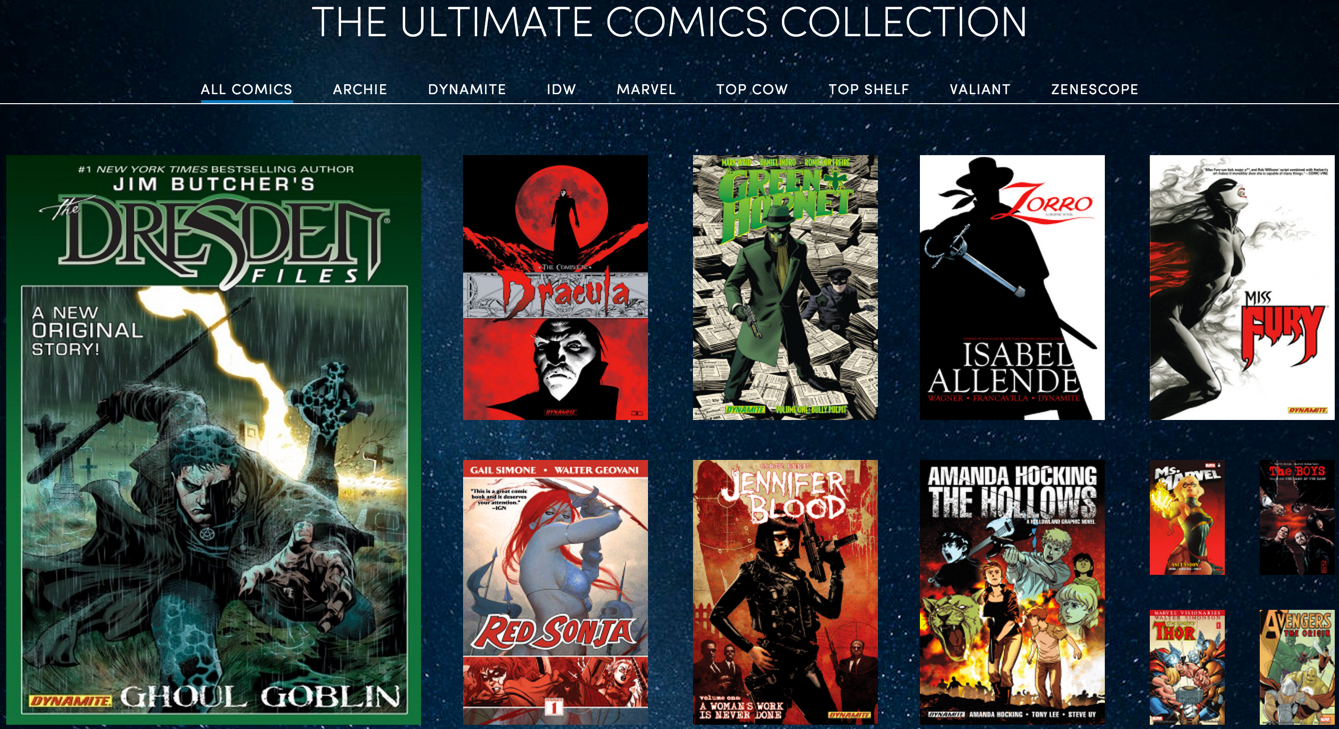 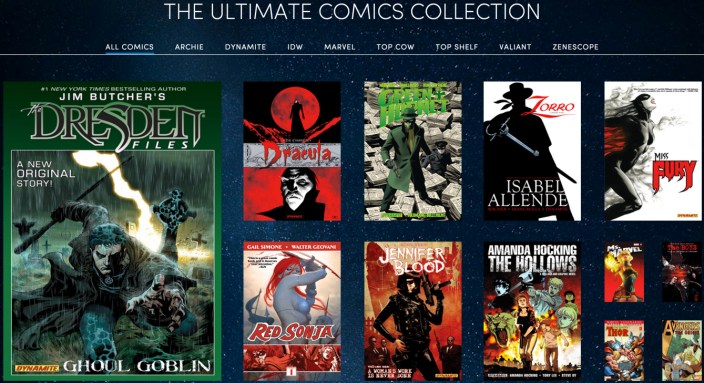 Scribd, the builder of the world’s premier e-book subscription service, has recently added a comics category to its massive online library. There are now more than 10,000 comics and graphic novels from publishers like Marvel, Archie, Boom! Studios, Dynamite, IDW/Top Shelf, Valiant, and more to come. Not only do they have more than a million titles, but they’re offering 1 month free to new subscribers ($8.99 value). That’s one month of comics beamed to all of your devices, wherever you go, for free. 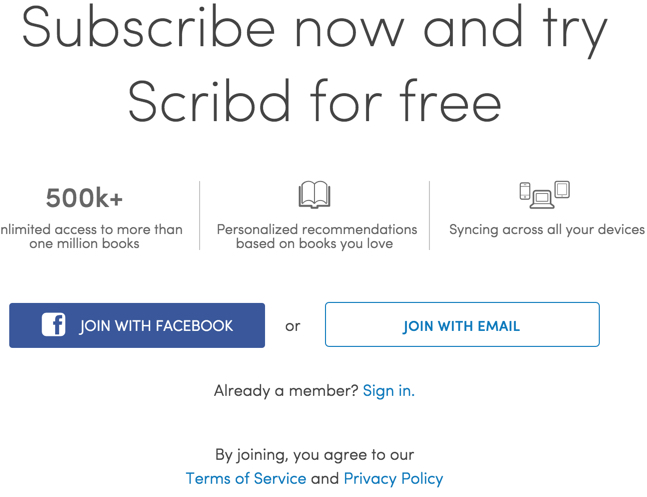 SAN FRANCISCO, Feb. 10, 2015 /PRNewswire/ — Scribd today announced that it is expanding its leading global subscription reading service to include unlimited access to more than 10,000 comic books from some of the world’s top comic publishers. This offering represents the first time such a rich and varied selection of comics from some of the industry’s top publishers – including Marvel, Archie, Boom! Studios, Dynamite, IDW/Top Shelf, Valiant and Zenescope – has been made available in one unlimited digital subscription service. The selection includes fan favorites from Spider-Man to My Little Pony to X-O Manowar, and from Transformers to Archie, along with hit YA series such as Locke & Key and acclaimed graphic novels by creators Alan Moore, Matt Fraction, Gail Simone,George R.R. Martin and more.

“We are very excited to take this step in expanding our subscription service beyond books,” said Trip Adler, co-founder and CEO of Scribd. “This addition gives comics readers the freedom of unlimited reading, while also giving our e-book and audiobook lovers the opportunity to discover comics and graphic novels.”

Comics and graphic novels represent an $870 million market in the US, with a rapidly expanding and diversifying readership. Scribd is at the forefront of efforts to develop and shape the industry for the digital age by making it possible for readers worldwide to enjoy unlimited access to the comics they want across all mobile devices, as well as the web.

By Character – Character pages allow readers to follow their favorite characters through their series and guest appearances. By Series – Readers can browse by title and read entire series from start to finish. By Curated Collection – Readers can browse more than 150 expert-curated collections of comics, such as Incredible Team-Ups, Classic Marvel Moments, Zombie Horror, Welcome to Riverdale, Funny Women, Supernatural Romance, and more. The addition of comics and graphic novels, along with other recent e-book and audiobook deals, increases Scribd’s library to more than one million titles, representing the largest unlimited-access offering of e-books, audiobooks, and comics globally.

Scribd is the premier subscription book service with more than 1 million e-books, audiobooks, comics, and more, including New York Times bestsellers, Pulitzer Prize winners and reader favorites across every genre. Launched in 2007 by founders Trip Adler and Jared Friedman and backed by Y Combinator, Charles River Ventures, Redpoint Ventures and Khosla Ventures, Scribd is one of the most influential websites in the world reaching more than 100 million active readers every month. It is available in nearly every country, featuring 62MM documents in +80 languages, making it the world’s largest subscription reading service. For more information, please visit www.scribd.com.

Marvel Entertainment, LLC, a wholly-owned subsidiary of The Walt Disney Company, is one of the world’s most prominent character-based entertainment companies, built on a proven library of more than 8,000 characters featured in a variety of media over seventy five years.  Marvel utilizes its character franchises in entertainment, licensing and publishing.  For more information visit marvel.com.  © 2015 MARVEL

Archie Comics is the leading mass market comic book publisher in the world and the home to a wide array of the most popular humor, action-adventure and superhero characters in entertainment, including Archie, Jughead, Betty and Veronica, Reggie, Kevin Keller, Josie and the Pussycats, Sabrina the Teenage Witch, Afterlife With Archie, the Dark Circle Comics superhero characters (The Black Hood, The Fox, The Shield and more), Li’l Jinx and many more. Archie Comics have sold over 2 billion comics worldwide and are published around the world in a number of languages. In addition to comics, Archie characters have been featured prominently in animation, television, film and music. Follow Archie Comics on Twitter, Facebook, YouTube and the Archie Comics Store.

IDW is an award-winning publisher of comic books, graphic novels and trade paperbacks, based in San Diego, California. Renowned for its diverse catalog of licensed and independent titles, IDW publishes some of the most successful and popular titles in the industry, including: Hasbro’s The TRANSFORMERS, G.I. JOE and MY LITTLE PONY; Paramount’s Star Trek; Nickelodeon’s Teenage Mutant Ninja Turtles; 2000AD’s Judge Dredd; The Rocketeer; Toho’s Godzilla; V-Wars from New York Times best-selling author Jonathan Maberry; Ragnarök from Eisner Award-winner Walter Simonson; Winterworld, created by Chuck Dixon and Jorge Zaffino; and Little Nemo from the award-winning duo of Eric Shanower and Gabriel Rodriguez. IDW is also home to acclaimed imprints such as the Library of American Comics, Yoe! Books, IDW Artist’s Editions, and Top Shelf Productions.

Valiant is a leading character-based entertainment company with a library of over 2,000 characters, including X-O Manowar, Bloodshot, Harbinger, Shadowman, and many more. Established in 1989, Valiant has sold over 80 million comic books, and today its characters continue to be forged in publishing, licensing, film, video games, and beyond. Since its 2012 relaunch, Valiant has returned to the fore as one of the most highly regarded publishers in comics, earning a Diamond Gem Award for Comic Book Publisher of the Year and multiple Harvey Award nominations. Visit them online at ValiantUniverse.com.