Saving significant money on pre-ordered or just-released video games isn’t easy: retailers typically sell games at full retail for the first two months after release, shaving $5 off here or there. But what if you could save $12 every time you bought a new console game, and then get $10 of additional store credit for a preorder? Big savings like this are the key feature of Best Buy’s Gamers Club Unlocked, which is currently offering two years of discounted games for only $30 (reg. $100). The promotion is in-store only and runs through February 28.

I had never signed up for something like this before, but I jumped on this deal when it popped up late last year. After only one month — with 23 months left of discounts — the savings had already eclipsed the cost of the card. Every new game purchase is 20% off, bringing $60 console titles down to $48 and $50 games down to $40. Then, using the My Best Buy rewards system, $10 pre-order bonuses for upcoming games including Batman: Arkham Knight, Halo 5: Guardians, and Mortal Kombat X effectively chop their prices down further to $38 each. That’s crazy cheap pricing for AAA-caliber games.

9to5Toys tracks game deals every day, so I can say this with confidence: if you know you’re going to buy a game when it’s released, there will be no better deal on day one — and likely even after month one or two — than what you’ll save through Gamers Club Unlocked. There are other benefits, too; read on. 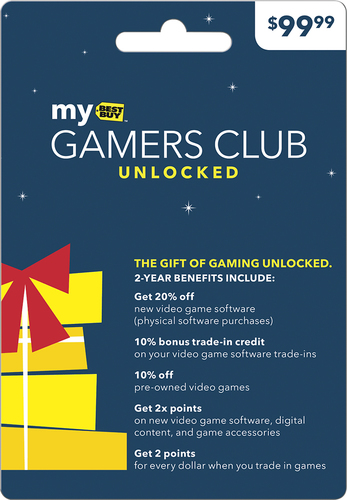 Gamers Club Unlocked is a perfect gift for the gamer who plans to buy even an average number of games over the next two years. It takes only three typical game purchases before the card pays for itself, after which the savings just keep racking up. Consider Bayonetta 2, which is still selling for nearly its full retail price at Amazon after coming out last October; at Best Buy, the price is $48 with this card. It’s one of the best purchases I’ve made, and if you’re willing to trek to a Best Buy store to sign up, you’ll love it.