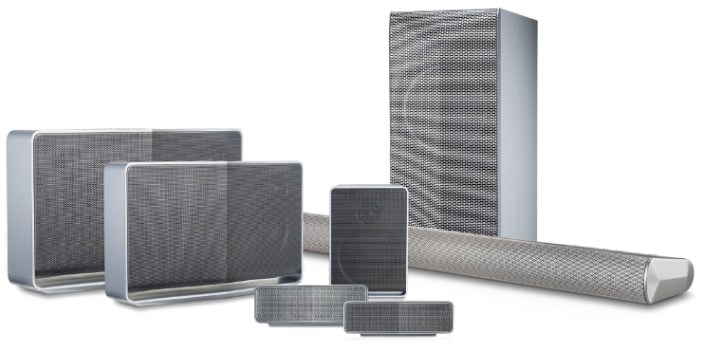 Big upgrades are coming to LG’s line of Music Flow speakers. Today, the South Korean-based manufacturer has released details on new wireless speakers and soundbars that expand its previously announced offerings while bringing new software compatibility with Google Cast and other services.

Seven new speakers will be available from LG with the expanded capability of Google’s services. Each new model fits a different need for consumers with wireless and portable speakers as well as soundbars in this round of releases.

The big news here is LG’s inclusion of Google Cast, which empowers users to send content – in this case music – to speakers directly from a device. This addition is notable as few other products on the market currently support this service, aside from Google’s own Chromecast and Android TV. With SONOS dominating this space, LG is taking advantage of few devices offering Google Cast to set itself apart from the competition.

Google Cast also enables users to stream music directly from internet services like Pandora, TuneIn, iHeartRadio, Rdio and others.  Users will be able to enjoy a “higher quality audio” then they would experience with Bluetooth devices because the audio is streamed directly from the cloud, as opposed to a phone or tablet. LG has also aligned itself with Spotify and Deezer to bring service specific features to these new speakers. Spotify Connect will be able to control the system from its own app without the need for any of LG’s software, this is key as Google Cast does not support this service.

Six speakers will be available in the coming days from Amazon and other retailers, the H3, H5 and H7 Wi-Fi enabled models will retail for $199, $279 and $379. Soundbar models include the LAS751M, LAS851M and LAS950M for $499, $599 and $999. Additionally, the portable and rechargeable H4 20W which will retail for $199 and will be available in May. LG has stated that current owners of LG Music Flow speakers and soundbars will be able to upgrade existing products with an over-the-air download as Google Cast is rolled out nationwide.

SEOUL, Apr. 14, 2015 — LG Electronics (LG) will introduce its first audio products to offer Google Cast in its lineup of smart Hi-Fi speakers and sound bars. LG’s Music Flow is a smart Hi-Fi audio system that takes the experience of reconnecting with favorite music to a whole new level. Google Cast will allow anyone to send their favorite music from their AndroidTM phone or tablet, iPhone, iPad, Mac, Windows laptop or Chromebook to their Google Cast-enabled LG Music Flow audio speakers and sound bars.

With Google Cast, proud LG Music Flow owners will not only be able to stream music from their mobile devices but also listen to tunes from their favorite online music service, including Google PlayTM Music, Pandora, Songza, TuneIn, iHeartRadio and Rdio, among others. Listeners can enjoy higher audio quality than what they would hear with a Bluetooth speaker because the music is sent from the cloud, not a mobile device.

“We are pleased to announce that LG Music Flow will be among the first audio speakers to feature Google Cast” said Byung-hoon Min, senior vice president and head of the CAV division at the LG Home Entertainment Company. “Google Cast is a perfect companion for LG’s Music Flow audio system. We are excited to work with Google in making music a more enjoyable experience for consumers worldwide”.

LG has integrated additional streaming partners including the popular services Deezer and Spotify to complement customers’ personal music collections. Spotify users can take advantage of Spotify Connect, which will act as a remote, allowing them to control their LG Music Flow speakers through the app.

Google Cast will be available in LG Music Flow models including HS9, HS7, HS6, H7, H5, H3 starting in April and in H4 Portable by the end of May. Current owners of LG Music Flow speakers and sound bars will be able to upgrade their products over-the-air with Google Cast once the service is introduced in local markets.