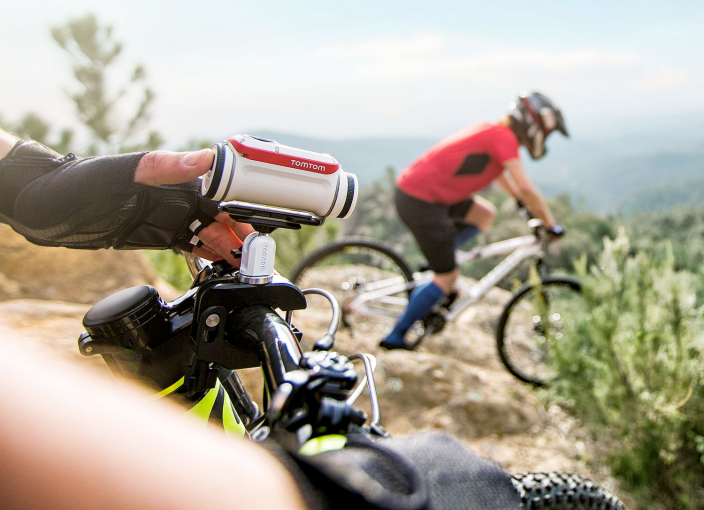 TomTom, best known for its GPS driving systems, is announcing its new Bandit Action Camera. Aimed at removing the tedious editing process that comes along with most popular options, you can simply give your smartphone a shake to edit and then share your new video within minutes of shooting it.

In general, video post-production can be a long and arduous process to say the least, especially as video quality gets better. However, Bandit cam’s on-board media server and smartphone companion apps (iOS and Android) allow for quick editing and sharing without the need for long capture sessions. Through automatic sensor (which use speed, altitude, G-force, acceleration and heart rate) and manual tagging, users can keep track of important moments as they happen to more efficiently sift through the content after the fact.

On top of providing a more organized timeline, these tags also allow Bandit’s auto editing system to create more exciting videos. You can simply shake your phone to reorganize clips and create videos so you don’t need to manually edit them. While somewhat gimmicky sounding, some may find the quick editing feature to be useful for casual sharing, but it’s hard to say without going hands on.

The new Bandit is still listed as available soon with no pricing information on the US TomTom site, but pre-orders are up now on the UK site starting at £309.99 (about $479 USD). There are also special accessory laden bundles coming soon in the form of an Android only option and the Premium Pack which ships with the Remote Control, Handle Bar Mount, Dive Lens Cover, 360 Pitch Mount and Power Cable.

Amsterdam, 29 April 2015 – TomTom (TOM2) today launches the all new TomTom Bandit Action Camera which makes editing and sharing videos quick and easy. Instead of spending hours downloading and sorting through footage, users can now create an exciting edit and share it within moments of the action. Now every hero can share his or her skills.

The TomTom Bandit is the first ever camera to come with a built-in media server, eliminating the need to download footage before being able to edit it. The camera works with a companion app, making it possible to create and share videos in a matter of minutes, simply by shaking a smartphone.

“We know that the biggest frustration people have with action cameras today is the time and effort it takes to edit,” says Corinne Vigreux, co-founder and managing director, TomTom Consumer. “With TomTom Bandit we’ve cut the editing time down from hours to minutes – all it takes is a shake!”

“We took a simple, but radical approach to solving the editing problem,” says Slobodan Stanisic, lead engineer, TomTom. “With all existing action cameras you first need to download gigabytes of footage to a powerful PC, a process that can take a long time. Then you need to find the highlights, put together a story and format it. We know this often takes hours. Not with the TomTom Bandit. We have designed a camera where the footage is processed on the camera itself, making the editing process far easier and much faster.”

The TomTom Bandit Action Camera is equipped with in-camera motion and GPS sensors to automatically find and tag exciting moments based on speed, altitude, G-force, acceleration and heart rate*. Highlights can also be tagged manually with a tagging button on the camera or the remote control*.

The TomTom Bandit works with a smartphone app, which includes a superfast viewfinder. Footage can be reviewed instantly with the smartphone app thanks to the built-in media server. In editing mode, a simple shake of the smartphone instantly creates an exciting movie. Users can then easily make changes, add music and add overlays of favourite metrics, such as speed, before sharing with friends.

The TomTom Bandit Action Camera produces great quality video. It has a wide angle lens, high-end 16 MP CCD sensor and a powerful processor. It is also completely waterproof, eliminating the need for an additional bulky case. ** The steel ring mounting system has a quick release mechanism and the low profile of the TomTom Bandit looks great on a helmet.

The uniquely designed Batt-Stick combines the long lasting battery, microSD card and SuperSpeed USB 3.0. It plugs directly into a computer via USB to charge and download footage, removing the need for additional cables or adaptors.

A premium pack will also be available in June including additional accessories for even more ways to enjoy the TomTom Bandit Action Camera. There will be a wide range of accessories available to purchase.

*an additional accessory is required