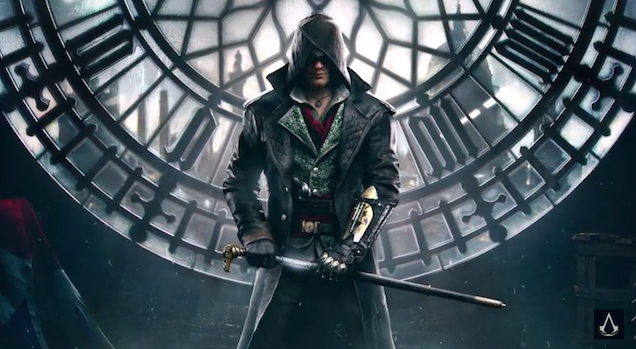 It’s that time of year again. Ubisoft has now officially unveiled this year’s main entry into the Assassin’s Creed franchise with a trio of new videos. As we previously knew from early leaks, the new Assassin’s Creed: Syndicate will take place in Victorian era London.

Down below you can see the new debut trailer, a brief gameplay video with developer commentary and details regarding this year’s duo of main characters, new traversal mechanics and more:

Syndicate will be led by the playable brother/sister duo of Jacob and Evie Frye. That’s right, we will have our first playable female assassin in a main AC entry and there will also female enemies present right down to the grunt level, according to reports.

Ubi has confirmed that we will be seeing famous historical figures like Charles Darwin and Charles Dickens while the story appears to involve the struggles of street gangs and the oppressive government (as usual). In fact, we will see the return of recruiting, as players will be able to form street gangs and get into large street brawls like you see in the trailer above.

We are also seeing a day/night cycle, a brand new stealth system (the hard-snap cover system is gone) and the new rope launcher. The new tool allows players to quickly zip to the top of a building or cross larger gaps. Fitting for the era, we are getting horse drawn carriages we can fight on, hide in and drive around the city.

Down below you’ll find the gameplay walkthrough, the Jacob Frye trailer and more details from Ubisoft:

About Assassin’s Creed Syndicate: London. 1868. The Industrial Revolution. An age of invention and prosperity, built on the backs of working class slaves. As gangster assassin Jacob Frye, you will recruit your gang to fight for justice on behalf of the oppressed working class. Lead the underworld to take back London in a visceral adventure filled with action, intrigue and brutal combat. Assassin’s Creed Syndicate will be available on Xbox One, PS4 and PC on October 23, 2015.

Key Features: – Put up your dukes and play as the first gangster assassin at the birth of the modern age, Jacob Frye. Unleash your arsenal of weapons, including the kukri knife, brass knuckles, and sword cane in brutal combat and utilize the brand new rope launcher to scale buildings in seconds or take your enemies by surprise. – From Buckingham Palace to Big Ben, fight and triumph across the fast-paced open world of Industrial London using high speed trains and carriages. – Establish Great Britain’s fiercest gang, the only force that can challenge the elite and defeat rival gangs to bring freedom to the oppressed masses – Also play as Jacob’s twin sister Evie, a relentless Assassin who has perfected the silent, swift, invisible strike.