What do you get when a group of engineers with Apple, Digg, and Path on their resumes hunker down in a kitchen for months on end? Evidently, a smart oven that has double the processing power of the latest MacBook and a near Retina display. The June Oven literally aims to cook your food for you with a laundry list of tech specs that would make any gadget aficionado blush.

That is, if the price tag doesn’t make you faint first…

That MacBook that we mentioned? It’s actually $200 cheaper than the June Oven. At $1,495, this smart oven would be a significant investment for anyone looking to beef up their kitchen skills. That said, the technical specifications make the price tag seem much more appropriate when you consider the features and design put into the product.

Co-founders Matt Van Horn and Nikhil Bhogal spared no expense when developing this new kitchen accessory. The premise is simple, much like other smart devices, the June Oven can recognize and recommend cooking settings by using a series of input devices. There is a built-in scale that detects the weight of your food, while the thermometer probes measure internal temperature to make a recommendation on cooking times. The integrated 1080p camera also serves a part in recognizing the meal being prepared. 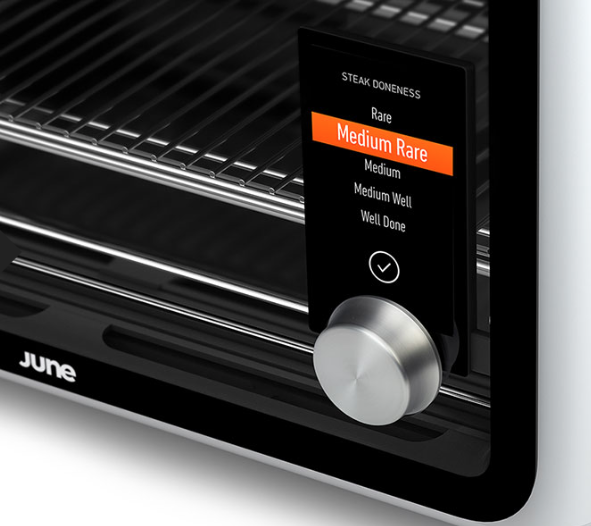 will sense that a piece of meat has been placed in the oven, from there it will use temperature, weight and data from previous experiences to make a cooking plan. All of information shows up on the accompanying iOS app or the multi-touch display on the face of the oven. From there, users can dial in exactly how they would like their steak prepared. After a game plan is set, June does the rest, monitoring and adjusting temperatures along the way. Users can even get a live feed of the food at any point via the app and June’s built-in camera.

By essentially building an advanced smartphone or computer with an oven attached, June can learn and grow as more food is cooked. Just like an iPhone, over-the-air updates via Wi-Fi connection can help create a better consumer experience as time goes on.

The June Oven is slated for a Spring 2016 launch, interested parties can put down a $95 deposit today to claim a chance to buy it for the introductory price of $1,495. After July, the pre-order price will jump to $2,995.