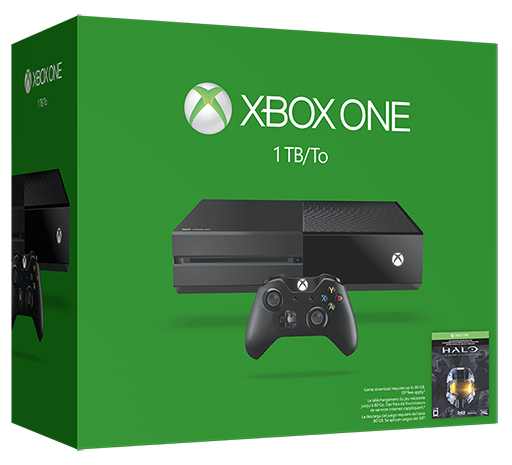 Update (6/9 6:00pm): Microsoft is offering a $50 promotional code to its store with the pre-order of the 1TB Xbox One + Halo: The Master Chief Collection Bundle.

After hearing rumblings last week, Microsoft has announced that it will officially be dropping the price on its 500GB Xbox One model to $349. We frequently see deals in our daily games/apps roundup that are even lower than this updated list price. A new 1TB console that includes the Halo: Master Chief Collection was also detailed by Microsoft this morning, which will start at $399 and is available for pre-order now.

Today’s new consoles will ship with Microsoft’s updated Wireless Controller which now includes a 3.5mm stereo headset jack, eliminating the need for extra add-ons or third-party solutions. The special edition Covert Forces controller that we previously detailed is also available for pre-order today as a part of this news.

Next week, Xbox is kicking off the biggest games week of the year as we head to Los Angeles for E3 2015 where we’ll showcase the best lineup in Xbox history. But before the lights go up and we take the stage for our media briefing, we wanted to share a few pieces of early news as we continue to put games and gamers at the center of everything we do.

Since Xbox One launched, one of the most frequent requests from fans is to add more storage to their consoles. Today, we’re unveiling the Xbox One 1TB console, with a new matte finish and more storage for your games and media, making it the best place to play the biggest blockbusters this holiday like Halo 5: Guardians, Rise of the Tomb Raider, and Forza Motorsport 6. Only Xbox offers the most choice when it comes to storage options, now with increased on-board storage as well as the capability to extend game storage by adding an external USB 3.0 drive.

But that’s not all. We’re also including our newly designed Xbox One Wireless Controller that now comes with a 3.5mm stereo headset jack, and in select regions for a limited time, Halo: The Master Chief Collection, the definitive Halo experience on Xbox One.*

Now let’s take a closer look at the new Xbox One Wireless Controller, shipping with future consoles moving forward, and now featuring a 3.5mm stereo headset jack that lets you plug your favorite gaming headset right into the controller. With the updated controller, in addition to the volume and mute controls on gaming headsets, you’ll also have the option to adjust headset volume, mic monitoring, and voice and game audio balance through the Settings menu on your console.  We’ve also improved the quality of audio coming through the controller and increased the maximum audio volume on headsets used with this controller, based on fan feedback. All existing controller accessories will work with the updated controller, including the Stereo Headset Adapter for those who want the convenience of fingertip control for their audio. In addition to audio improvements, we’ve fine-tuned the bumpers for more consistent performance anywhere along the full surface of the bumper. And we’ve enabled wireless firmware updates on the updated controller which eliminates having to connect the controller via USB cable to receive updates. What’s more, fans will be able to purchase the new controller as a standalone item in black as well as a new camouflage design in silver and black with the Xbox One Special Edition Covert Forces Wireless Controller.

And finally, as we mentioned at GDC, we are committed to designing Xbox accessories to support both Xbox and Windows 10. We are pleased to announce that starting this fall, you’ll be able to purchase the Xbox Wireless Adapter for Windows to enjoy the freedom and convenience of the wireless controller on Windows 10 PCs, laptops, and tablets.*** With the Xbox Wireless Adapter for Windows, you’ll simply plug the Adapter into the USB 2.0 or 3.0 port of your Windows 10 PC and bind the Adapter to your Wireless Controller to enable the same gaming experience you’re used to on Xbox One, including in-game chat and high-quality stereo audio. The Xbox Wireless Adapter for Windows will be available for $24.99 U.S. MSRP or bundled with an Xbox One Wireless Controller for $79.95 U.S. MSRP* and sold in most markets where Xbox accessories are currently available.