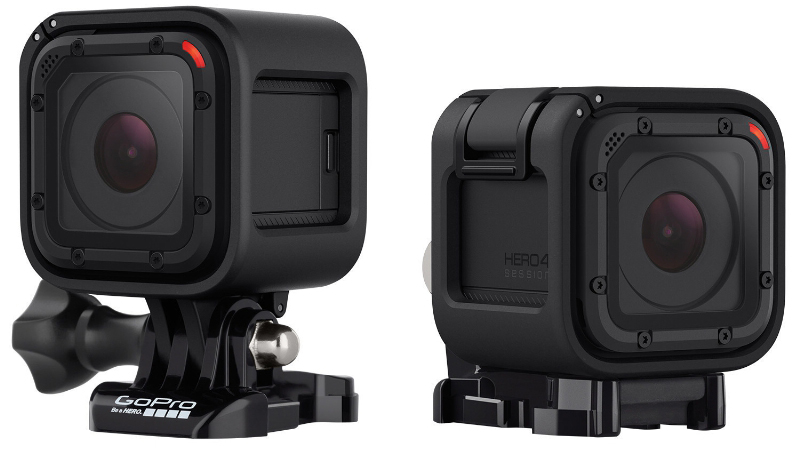 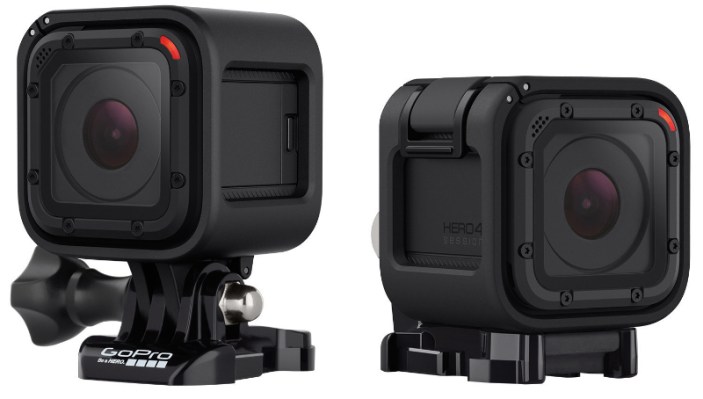 It’s been a busy year for GoPro and it doesn’t appear to be stopping anytime soon. Today the action camera manufacturer has announced a new addition to its popular line of products. The new HERO4 Session is 50% smaller than GoPro’s HERO4 Silver camera with a price tag to match.

GoPro’s new HERO4 Session follows the new HERO+ LCD model, which continues to expand upon its mission of offering different cameras for a wide variety of recording situations. This new model comes in with a low-profile design and waterproof housing (to 33 feet) that should enable users to capture video in smaller spaces than ever before. GoPro has opted for a simpler design in this case, even in comparison to its less feature packed models from previous generations. It’s size and form factor remind us of Polaroid’s more cost effective action camera option.

This new design is centered around one button that controls the power and recording. A short press powers on the camera and begins the video recording, while a longer press triggers time lapse photography. An additional press of the button will save the video or image and power down the camera. The GoPro app or Smart Remote will be able to provide additional controls and settings.

Wi-Fi and Bluetooth capabilities will enable playback via the app as well. The GoPro HERO4 Session will be able to capture 1080p at 60fps, 720p at 100fps and 8MP still photos. All previously released GoPro mounts will be compatible with this new release. Users can expect two hours of battery life on a full charge.

With a $400 price tag, it will be a tough sell for most consumers in comparison to the HERO4 Silver which offers the same video specs and a higher megapixel sensor. The HERO4 Silver is currently available at $50 discount at Adorama via eBay. Best Buy also includes a $50 gift card (added at checkout) with the purchase of a GoPro HERO4 Silver. Frequent 9to5Toys readers know that we regularly see the HERO4 Black, which captures 4K video, at a discount that is comparable to the Session’s list price.

The HERO4 Session will be released on July 12th at select retailers in the United States including Amazon and Best Buy.

GoPro Launches HERO4 Session: the Smallest, Lightest and Most Convenient GoPro, Yet

SAN MATEO, Calif., July 6, 2015 /PRNewswire/ — GoPro, Inc. (NASDAQ: GPRO), enabler of some of today’s most engaging content, is proud to announce HERO4 Session, the smallest, lightest, most convenient GoPro yet.  50% smaller and 40% lighter than GoPro’s best-selling HERO4 Black and Silver cameras, HERO4 Session packs GoPro’s Emmy® Award-winning image quality and performance into an exciting new low-profile form factor. HERO4 Session benefits from a durable waterproof design that eliminates the need for a separate housing and features simple one-button control to make capturing immersive photos and video quicker and more convenient than ever before. HERO4 Session is compatible with existing GoPro mounts and will retail for $399.99 MSRP at authorized GoPro retailers around the world and on GoPro.com beginning July 12, 2015.

“With HERO4 Session, we challenged ourselves to produce the smallest, lightest, most convenient GoPro possible,” said Nicholas Woodman, GoPro founder and CEO. “HERO4 Session combines the best of our engineering and user-experience know-how to deliver our most convenient life-capture solution, yet.” Woodman adds, “I’m so excited about the launch of HERO4 Session because now I can finally use mine in public!”

HERO4 Session captures GoPro-quality 1080p60, 720p100 and 1440p30 video along with eight megapixel photos in Single, Burst and Time Lapse modes. It features many of the same innovative features found in GoPro’s best-selling HERO4 Black and Silver cameras, including SuperView™, Protune and Auto Low Light recording modes. An expanded set of controls and settings can be accessed when using the GoPro App or Smart Remote.

HERO4 Session is built to GoPro’s famous rugged standards and is waterproof to 33 feet (10 meters). It features a sleek frame mounting system that is compatible with GoPro’s expansive array of mounts.  An innovative dual microphone system dynamically switches sound recording between microphones to reduce wind noise during activities. Audio performance during water-based activities has been dramatically improved thanks to HERO4 Session’s waterproof design that eliminates the need for a separate waterhousing, which can often muffle sounds.

“At GoPro, sound quality is as important as image quality and we’re very excited about the stunning audio advancements we’ve made with HERO4 Session during water-based and windy activities. It’s incredible what this little GoPro can capture,” remarked Woodman.

About GoPro, Inc. (NASDAQ: GPRO) GoPro, Inc. is transforming the way people capture and share their lives. What began as an idea to help athletes self-document themselves engaged in sports has become a widely adopted solution for people to capture themselves engaged in their interests, whatever they may be. From extreme to mainstream, professional to consumer, GoPro enables the world to capture and share its passion. And in turn, the world has helped GoPro become one of the most exciting and aspirational companies of our time.