Kitchen Tech: Does the Homping Grill deliver on its promise of healthy, smokeless + portable BBQ? 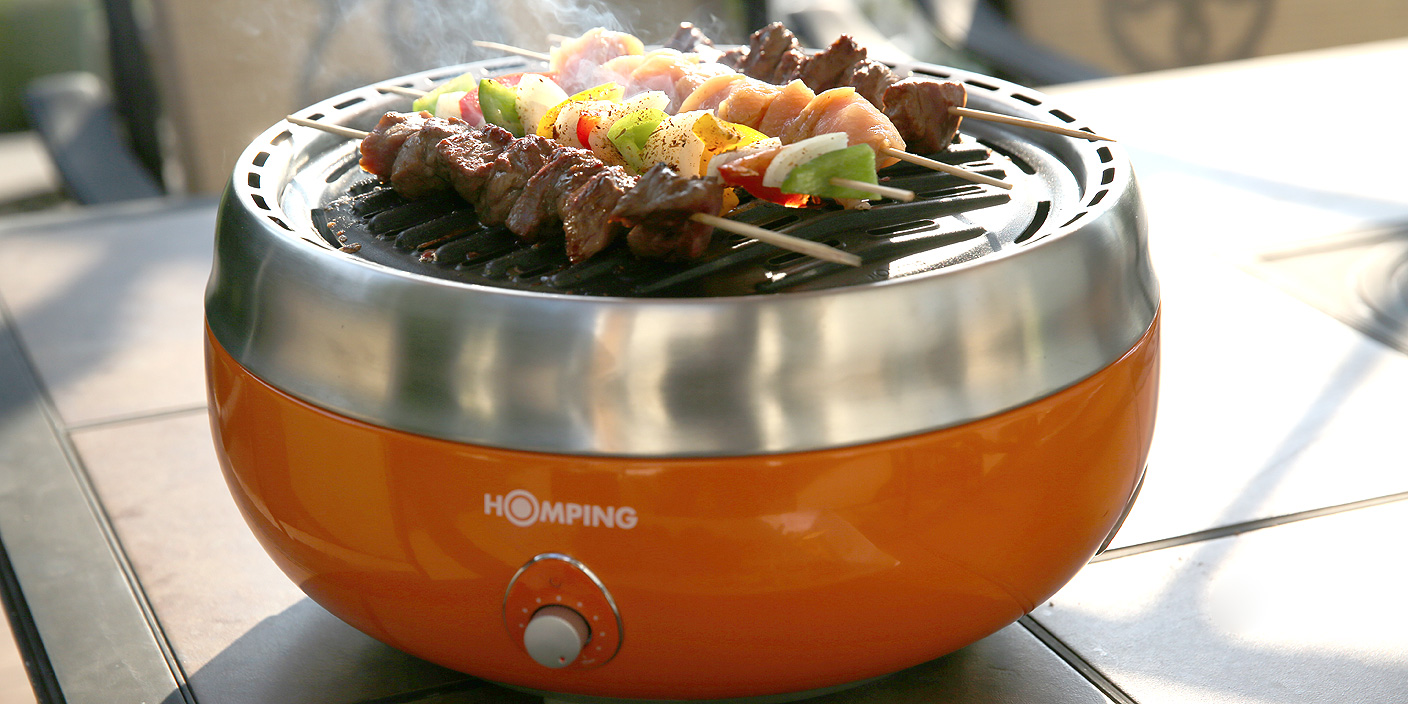 Portable grills are not a new thing, nor are they especially complex: if you’re looking to do basic tailgate-quality BBQing or Japanese-style yakitori grilling, you can achieve either goal for around $50 plus the $10 cost of charcoal, ignition fluid, and matches. What that will get you is a little fireproof box with a basic wire top, passive cooking features such as “adjustable air vents,” and no style.

Importing an award-winning design from Korea, a company called Homping USA is trying to change the face of portable grilling. Rather than selling a plain box with disposable parts, the Homping Grill ($199) is a 13″ circular grill with a washable 11.5″-diameter cooking surface. Available in silver with a black or orange base, it’s claimed to be “smokeless,” safe to touch, and easy to clean. A fan is built into the base so you can actively control the power of the charcoal fire inside, and a carrying bag is included for portability. After testing the Homping Grill, I had mixed feelings about its performance relative to much cheaper or peer-priced Weber portable grills, but some people may prefer its design regardless… 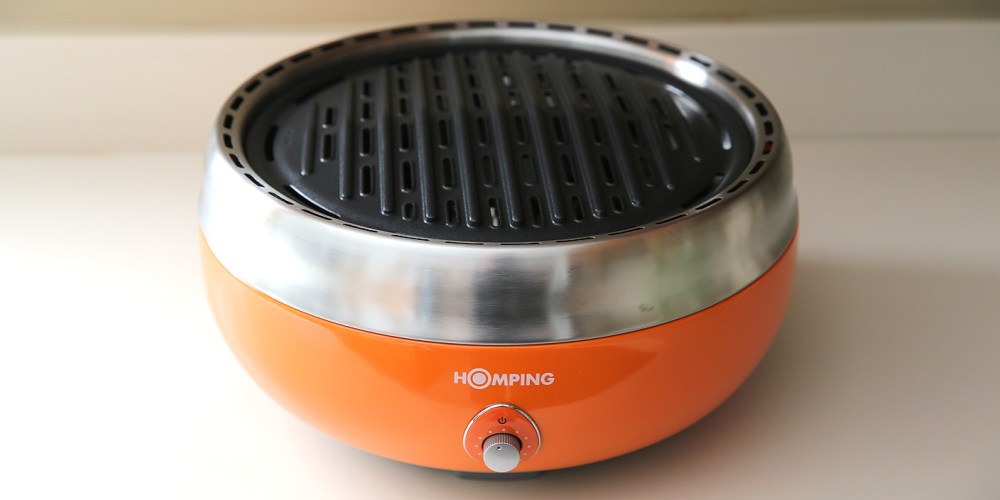 Homping Grill’s single best feature is its industrial design. Made almost completely from metal and weighing 8.5 pounds, it arrives as a collection of pieces that are both easy and intuitive to assemble. The one arguably major omission — a lid — is compensated for with a nice zippered carrying bag, while a collection of steel top components are both sturdy and easily washable. So long as you’re careful with its contents, you can move Homping Grill while it’s in use, as the sides of its base don’t get hot to the touch — only the top. A metal bar is included to manage hot cooking elements, a part that I’ve mostly seen used before in Korean tableside BBQ restaurants. 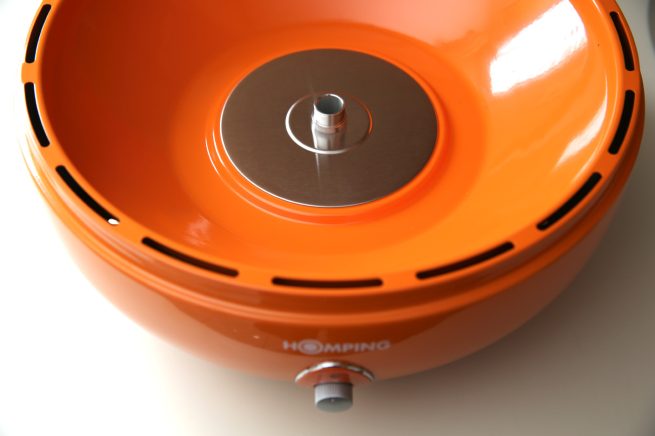 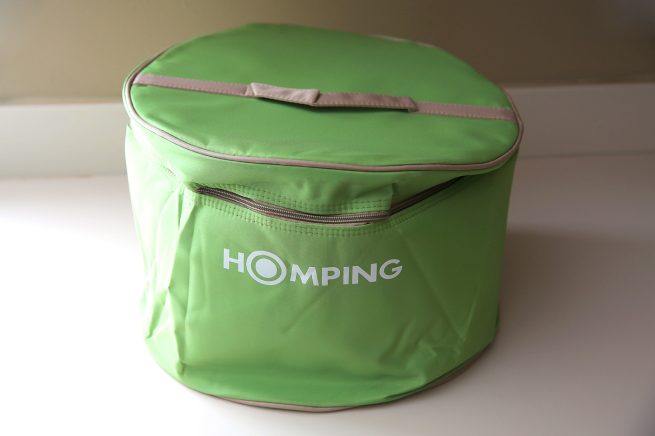 Putting its look and feel aside, Homping Grill’s major novelty is an adjustable fan in its base. Powered by four self-supplied AA batteries — the company’s web site says three — the fan is controlled by a dial on the grill’s front. The batteries will need to be pretty fresh. I went through three sets of AA’s, finding that although the power light illuminated with each set, the fan wouldn’t actually turn on unless I used four completely new batteries. Since there’s no other electrically-powered element inside, it’s unclear why the power light would come on at all if the fan won’t run. Without the fan, Homping Grill works pretty much like the less expensive fanless portable grills I mentioned, minus the nice industrial design. With the fan on, the Grill pushes air upwards through its base, using oxygen to stoke the flames. 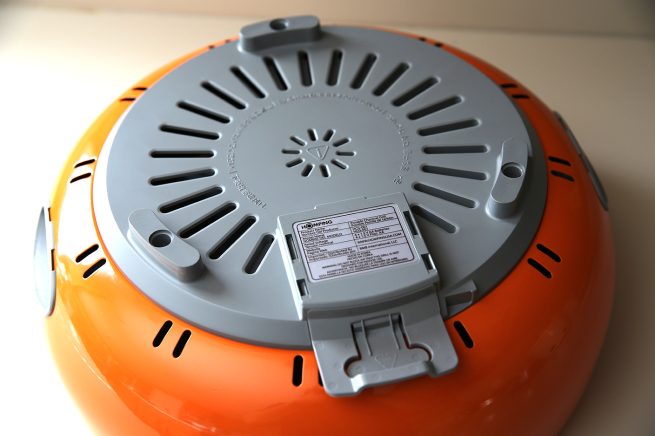 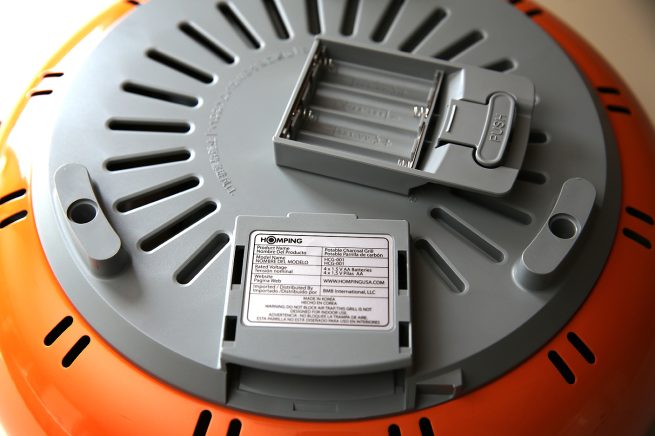 Setting up the grill is pretty easy. You place eight self-supplied charcoal briquettes into a nested dish, pour 20ml of self-supplied ignition gel in a separate outer dish, light the gel with a self-supplied igniter, then use the metal bar to place the briquettes in the flaming gel. At that point, you place the drip pan and grilling surface atop the flame, and wait for it to heat up. In less than 10 minutes, the cooking surface was at around 425 degrees from edge to edge– good for cooking pretty much anything. 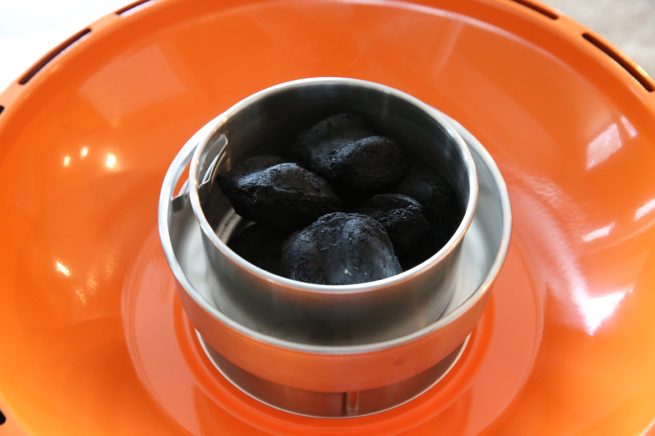 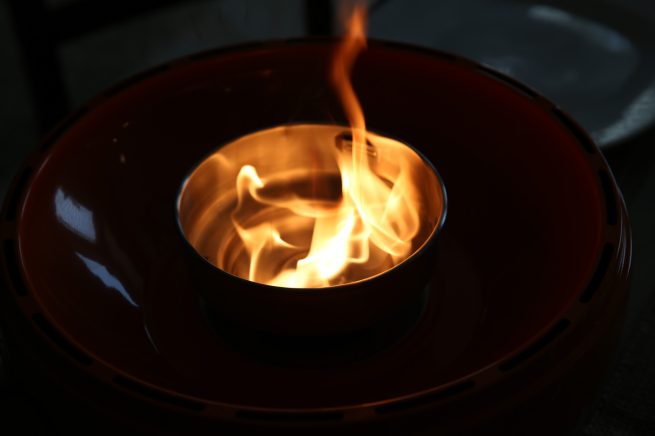 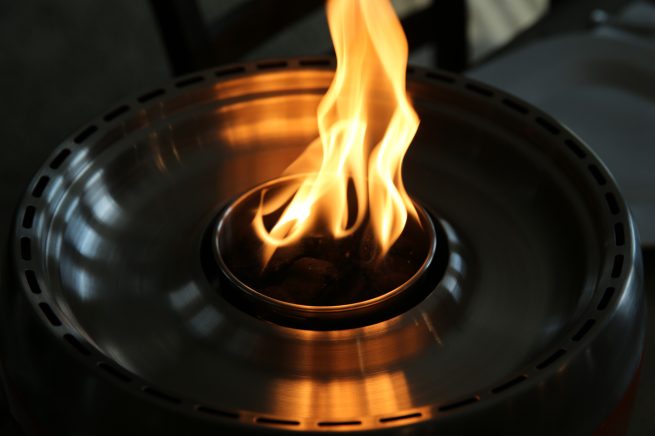 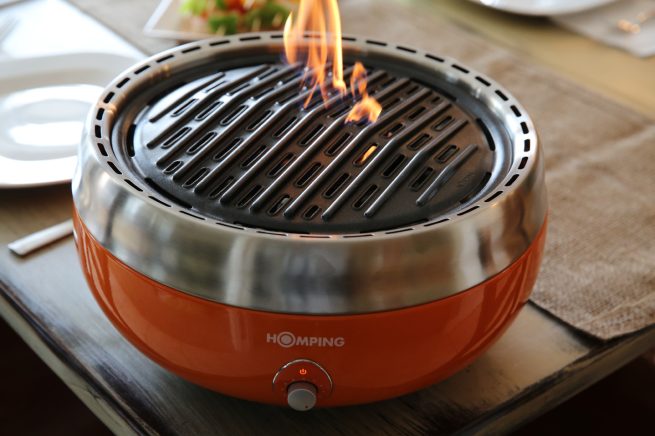 In practice, cooking with the Homping Grill wasn’t as thrilling as I had hoped it would be. Although the packaging claims that it’s “smokeless” — modified to “nearly smokeless” on Homping’s web site — the unit produced plenty of smoke when I used it. The box and marketing similarly suggest that it can be used outdoors or indoors, but I was concerned enough by the strong smell of smoke (and likely scentless carbon monoxide) to move it outside after starting it inside. While our grilled meats did indeed have the taste of “real charcoal,” as advertised, they also carried the off-putting scent of ignition fluid. And the 11.5″ diameter cooking surface proved small enough that our family of four got tired of waiting for surface area to open up, and eventually wound up cooking most of our food (shown on the plate below) on a larger and more powerful backyard grill instead. 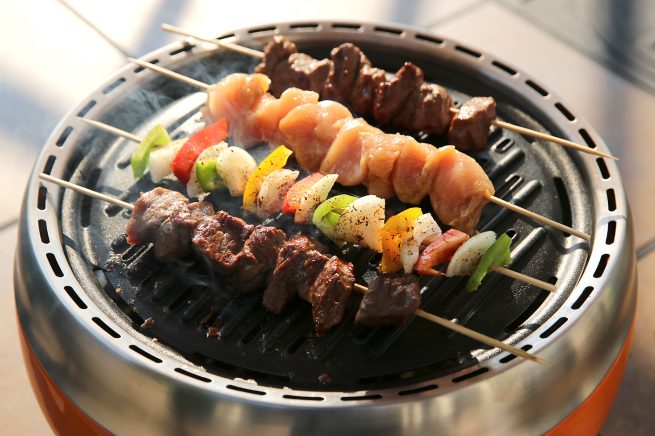 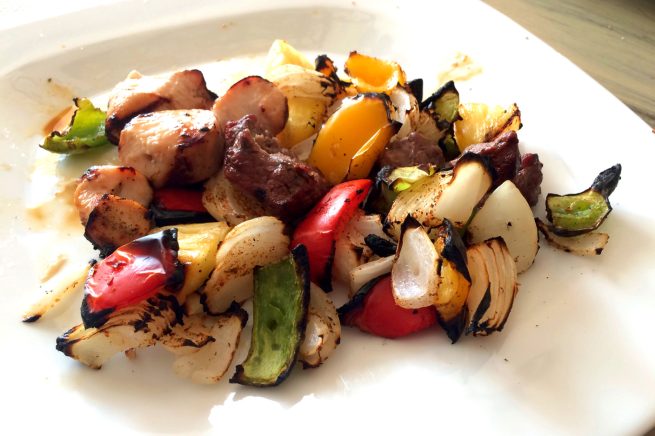 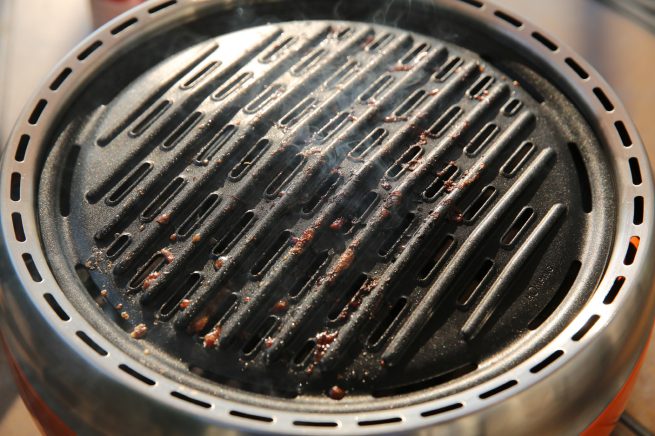 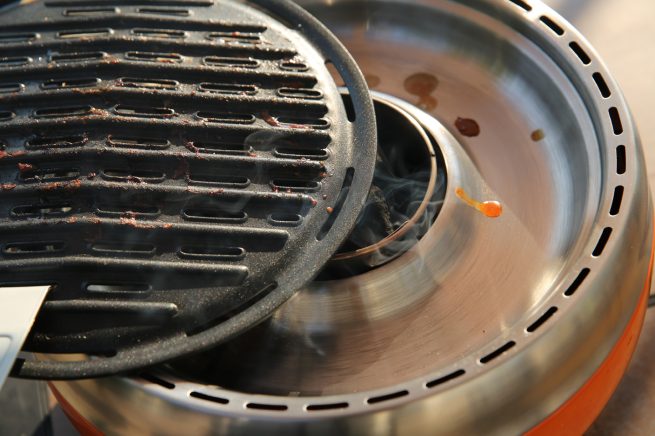 I was personally excited to try the Homping Grill because it seemed like it had the potential to work as a completely portable indoor/outdoor grill, and as a huge fan of Korean BBQ, the idea of easily making bulgogi or kalbi on a tabletop grill — like some of my favorite restaurants — was really appealing. The Japanese and Korean versions of the grill actually ship with what Homping USA calls a “pork plate” and plans to sell separately for $18. That surface uses a design with different grates that looks familiar from some Korean BBQ restaurants, and could be a great addition if you want to do Korean-style BBQ at home. 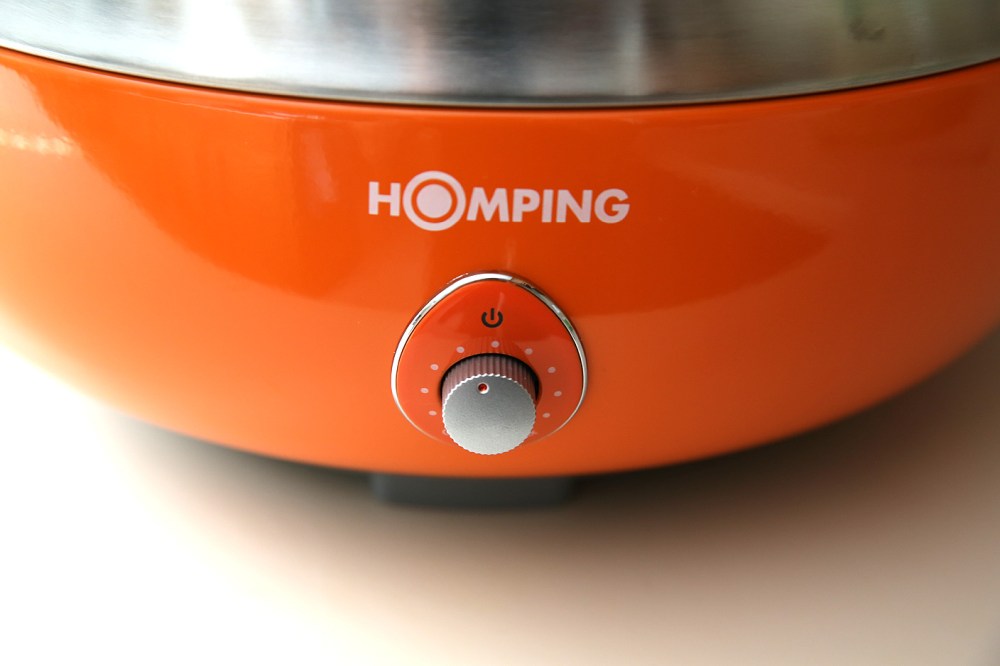 But the missing link — proper ventilation for the smoke — is a show-stopper for safe indoor use. The Homping Grill is really best positioned as an easy-to-clean but premium-priced option for tailgating or beach use, and not for use at home, where you could get a full-sized, name brand backyard grill for the same price. If you’re looking for a way to do Korean BBQ (outdoors) at home, or really appreciate modern industrial design, consider it — otherwise, your dollars will go further and you’ll have an equivalent or better overall cooking experience with other options, portable or otherwise.