Amazon is offering the Matte Gold variant of the 32GB Nexus 6P for $449 shipped, bringing the recently-announced color down $50 to the lowest price we could find. Amazon is also offering the 64GB model for $50 off at $499 shipped, and both models are also available at Best Buy for the same prices. Alternatively, Google is offering a $50 purchase credit toward a Huawei Watch when you buy any color Nexus 6P…

The Nexus 6P is widely regarded as one of the best Android phones ever, and we agree. The phone has a 5.7-inch AMOLED display with a resolution of 2560 x 1440, a Snapdragon 810, and 3GB of RAM. You’ll also find a large 3,450 mAh battery within, a rear camera built on a 12.3-megapixel Sony sensor (with dual-tone flash as well!), and an 8-megapixel selfie shooter. Just like its little brother the Nexus 5X, the 6P takes some of the best pictures we’ve ever seen come out of a Nexus phone. Reviews from 56 Amazon customers give the phone 4.5 out of 5 stars. 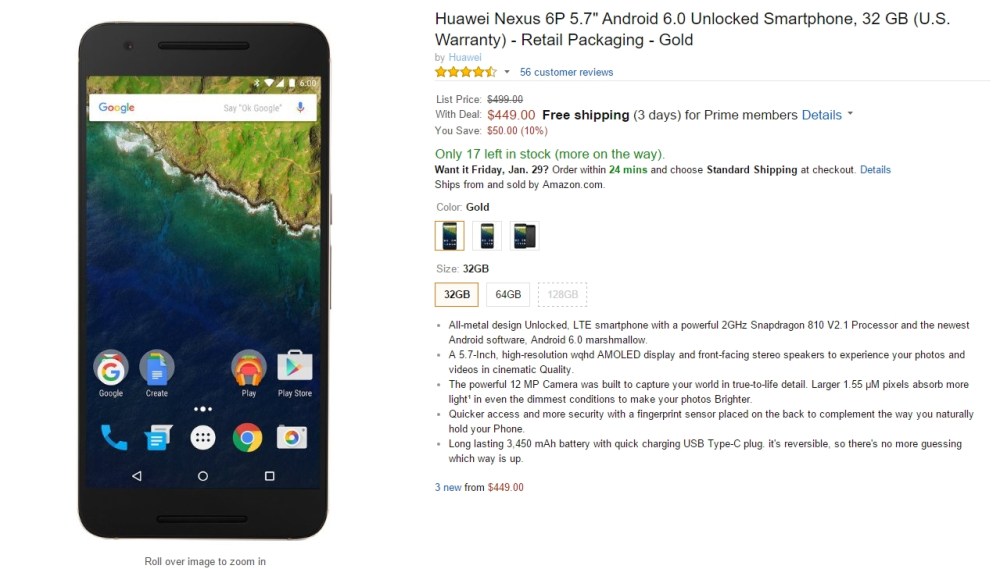