The consumer drone market has largely been dominated by DJI in the last few years. As interest grows, there has been a lack of viable alternatives to challenge the Phantom line of quadcopters.

A new startup out of Beijing has eyes on pushing its way into this space with a drone called Hover. Zero Zero Robotics is planning on using a few key features to catch the attention of potential pilots, including auto-follow and an ultra portable design. Ultimately, the question is less about capabilities but brand recognition. Does this up-and-comer stand a chance against the dominant DJI? More below.

From a feature stand point, Hover offers many of the standard bells and whistles you’d expect from a viable quadcopter. What makes it stand out is the unique design. Four propellors are encased in a carbon fiber cage. It is all connected around a spine that houses the electronics, sensors and camera.

This is particularly noteworthy because the drone itself can be touched at any point without fear of injuring the equipment or your hand. When the flight is over, Hover collapses into a neat little package for transportation. There is no need to disconnect the propellors or other accessories. Simply throw it in your bag and go.

Hover weighs in at a paltry 238 grams, which means that it is not subject to the FAA’s mandatory drone registration program. When it is folded up, the size is comparable to a VHS tape. All of the components and software were designed in-house, due to the complex nature of the product.

Instead of shipping with a remote control, Hover uses your smartphone to fly. It uses Wi-Fi connectivity to transfer a signal from the drone to your device while also providing a live feed. It will beam 720p video while capturing 4K and 13MP stills on internal storage. One of the major features of the software is face and body tracking. The app will lock in on a specific subject and direct the drone as needed. 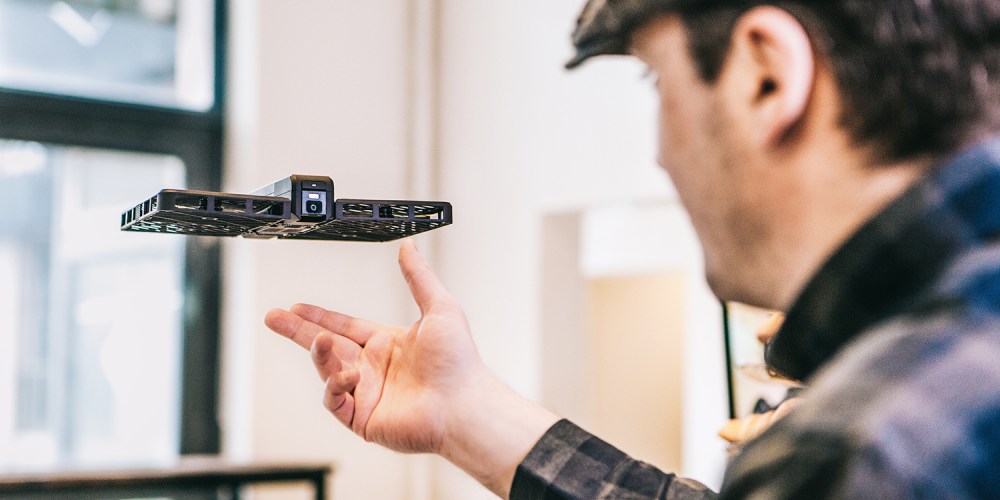 Hover represents an interesting decision for consumers in a space that is growing rapidly. It has yet to release a price point for this model but reports out today have it set at somewhere below $600. It is currently in a beta period with an expected release date of this summer.

Although it has a unique design, Hover is not nearly as full featured as DJI’s Phantom 3 Standard, which we regularly see below $400. Either way, having another brand vying for your money in this product category is ultimately a good thing. Hopefully Hover will encourage more innovation from competitors.