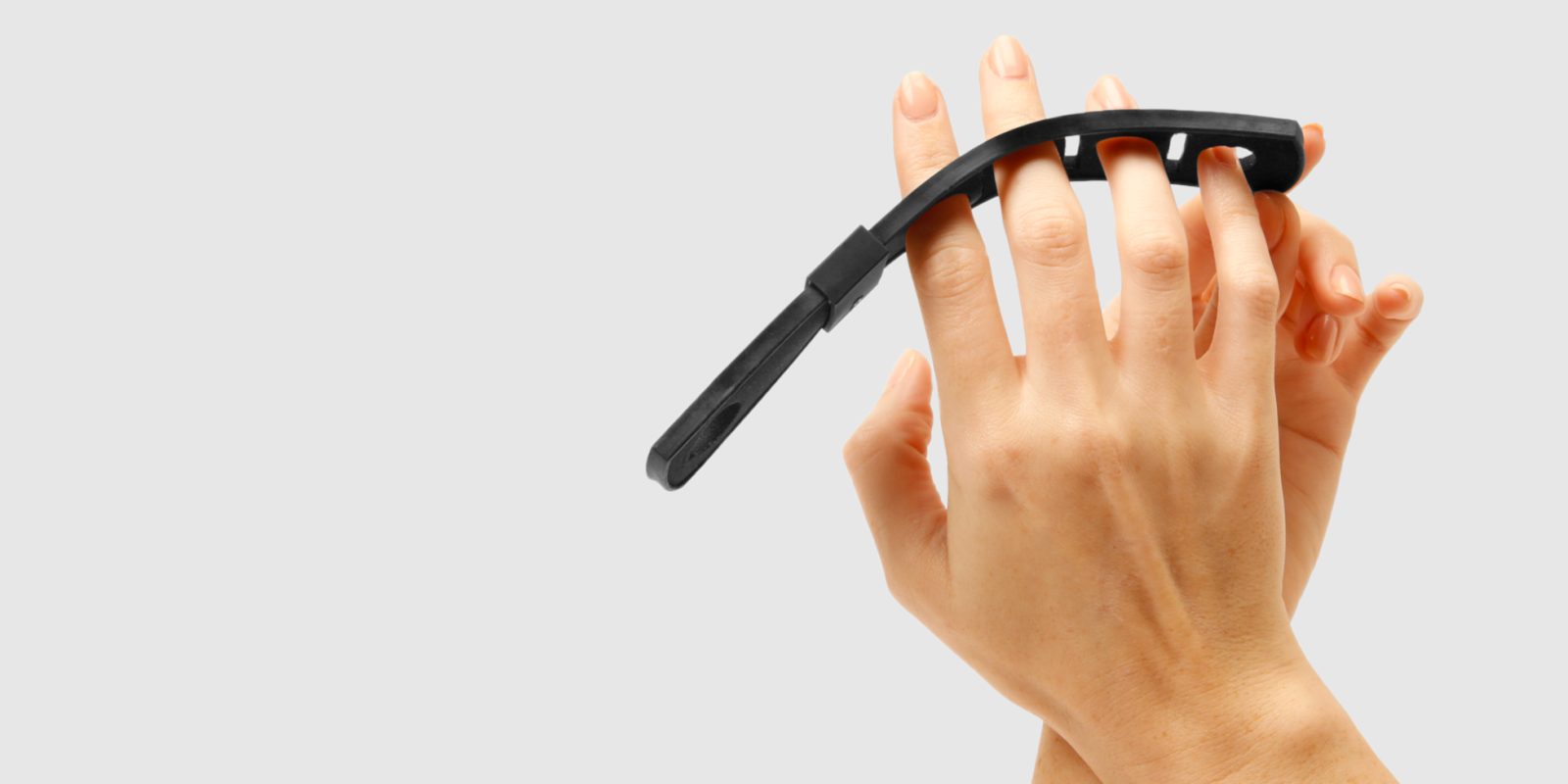 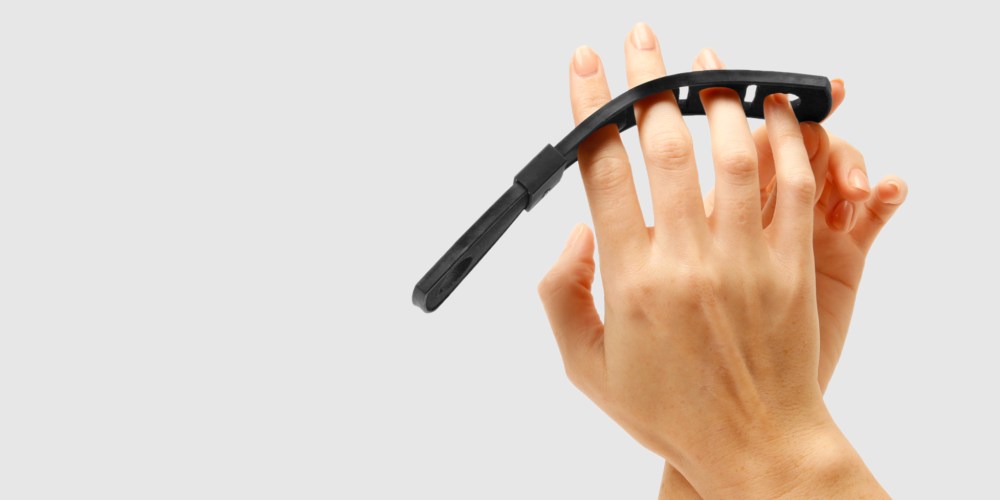 There’s any number of unique ways to type on your iPhone these days. With new third-party keyboards coming out weekly, it seems, you’re bound to find an alternative to the stock option that ships with iOS. But what about physical keyboards? While there are Bluetooth options designed for iPhone, the majority are either too large or have been disproportionally shrunk down.

An upcoming device called Tap was revealed this week with a design that looks straight out of the movies. This Bluetooth wearable tracks the movements of your fingers to recreate a virtual keyboard on “nearly any surface.”

Tap slides around each of your fingers, kind of like brass knuckles (more or less), and each sensor equates your movements to letters on a keyboard. All together, the soft foam device can translate 31 different taps into characters on your device. It is able to recognize inputs on “nearly any surface” including tables, chairs and your body.

The system that Tap uses to identify letters sounds a little complicated. Each finger is labeled as a vowel. From there, different combinations of your fingers produce the consonants and special characters. According to information provided by Tap, most users are able to adequately pick up the typing system in a hour or so. A free app download serves as a tutorial for learning how to use the wearable most effectively. Here’s a look at it in action:

Tap connects to a variety of devices, not just iOS and Android, via Bluetooth. You can also use it with compatible smart TVs, Mac and Windows PC and select streaming devices. Although the immediate use is as a virtual keyboard, Tap is seen as a longterm play with more functionality and device-specific actions.

If you’re interested, you’ll have to wait a while. Tap is currently only available to select beta testers with the goal of being available by the end of the year. Final pricing has yet to be announced.

Los Angeles, CA – (May 11, 2016) – Introducing TAP: the revolutionary one-handed wearable which allows you to type by tapping your fingers on ANY surface: a table, a chair, or even your body. Tap is a fast, accurate and eyes-free method of interfacing with any Bluetooth-enabled device, including smartphones, tablets, smart TVs, and computers.

At this moment, traditional keyboards are the dominant technology for data input into computing devices; but that is about to change, as virtual and wearable computing become more mainstream, and surfaces on which to use keyboards disappear. Tap technology enables seamless communications even within immersive AR/VR experiences where keyboard surfaces are not practical, and in wearable computing situations where screens are too small to type on.

The Tap Strap is a soft, flexible smart-textile which embeds an advanced sensing system into a small, comfortable fabric strap.  The Tap Strap can be worn on either hand or on both hands simultaneously for two-handed tapping.  With each tap, the Tap Strap sends a character or command to a device based on which fingers touched the surface.

Users can typically learn to tap in about one hour using the TapGenius App, a mnemonic-based learning system which combines musical and visual tutorials with a fun and engaging game.

Tap also provides a unique solution for blind and low vision users, who can now communicate on mobile devices with the speed and ease of sighted users.  Tapping can be done with fingers touching anything – without the need for on-screen keyboards which can be cumbersome for those who use Voiceover and other text-to-speech features.

“Tap has the potential to become the communication mode of the future, providing fast, accurate interfacing in situations where no physical keyboard exists.” said David Schick, Tap’s inventor.  “Tap is more discreet and accurate then voice input, and is faster and more precise than gesture-based systems.”

“Tap brings an entirely new dimension to how we can interface with the digital world,” said Ran Poliakine, Tap’s co-founder.  “Tap’s fundamental technology is applicable not only to language, but also to music, gaming and control.  It is a new modality that opens up a world of creative possibilities.  We are partnering with creative developers and select OEMs to help us unlock its full potential.  Our goal is to create an ecosystem in which our partners utilize Tap to deliver new and exciting experiences for our users.

Tap is being made available immediately to select beta users – initially in the San Francisco Bay area.  Tap is expected to ship commercially before the end of 2016.

A Tap Development Kit will be available to developers to allow them to harness the capabilities of Tap into a broad range of applications including gaming, AR and VR using the Tap platform.  By supporting an ecosystem of developers, the Tap value to consumers can ultimately extend to other languages, games, music, interactive AR/VR and perhaps to new and creative solutions for the future needs of computing.

A Tap reference design will also be made available to select OEMs for integration into their existing and future product lines including wearables and other innovations.

Tap Systems, Inc. was founded in 2015 by veteran entrepreneurs David Schick, Sabrina Kemeny and Ran Poliakine.  The company’s debut product, Tap, is designed to provide unparalleled freedom and access to our electronic devices anywhere and at any time.   The Tap Strap is a wearable Bluetooth keyboard that allows you to send messages, texts and emails by simple tapping on the nearest surface.  Tap is fast, accurate, easy to learn, eyes-free, and entirely mobile.