This record player has Don Draper-style, AirPlay connectivity and a secret bar 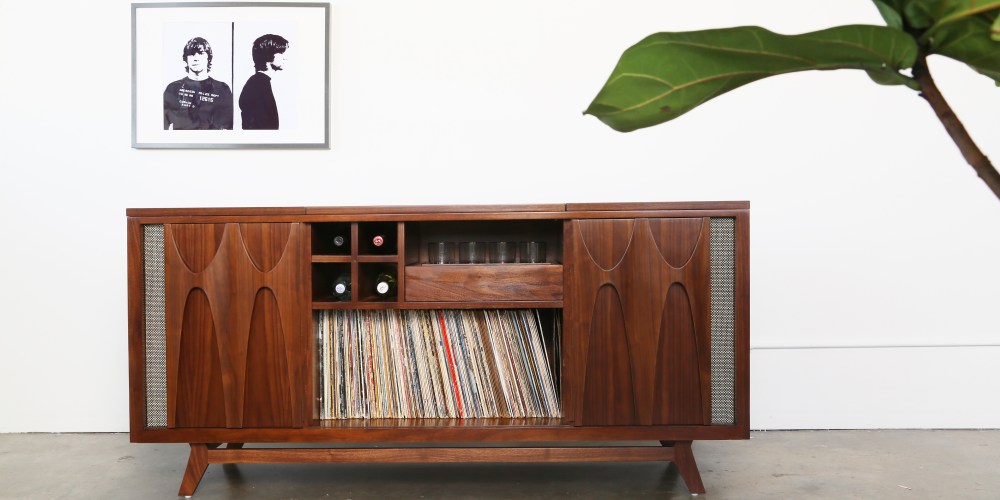 Mid-century modern design is returning with force and it’s popping up in more places than you might expect. Independent and boutique-style manufacturers are taking note while blending old-school visuals with modern day tech. The latest example comes way of Luno from California. Its new EGB2 Record Console hits all the right mid-century cues. Not only does it crank out vinyl tunes, the credenza also has AirPlay capabilities and a built-in bar. Essentially, it’s a must-have for your man cave…

Every Luno EGB2 is crafted in the United States and is made from American Walnut. Self-described as a mix of luxury and Mad Men-style design, this cabinet has it all for audiophiles and design-enthusiasts alike. The front has a classic geometric overlay that is flanked by two speaker cabinets wrapped in Marshall grill cloth. There is additional storage for some 150 records, if needed. Angled legs extend from the base to the floor, elevating the console to a higher viewpoint.

As good as it looks from the outside, things get much more intriguing inside the cabinet. One end houses the record player and built-in controls for managing playback of your sources. Each of the two-channel speakers are powered by a 200w class D amplifier and supported via a down-firing 100w active subwoofer. Aside from two auxiliary inputs, Apple users can take advantage of AirPlay streaming from an iPhone, iPad or Mac.

Perhaps the most lustful part of this product is the included bar. So after getting a killer design loaded with sweet tech, you have a retractable speakeasy that comes with custom made gold-rimmed whiskey glasses. There is room for storing up to four liquor or wine bottles, if needed. Basically, it’s an all-in-one Don Draper lady-killer that’s ready to be the center of attention at your next party.

Luno is a custom-order shop and pricing can vary according to material availability. They are currently accepting orders via their site. Additional information can be found on this page.