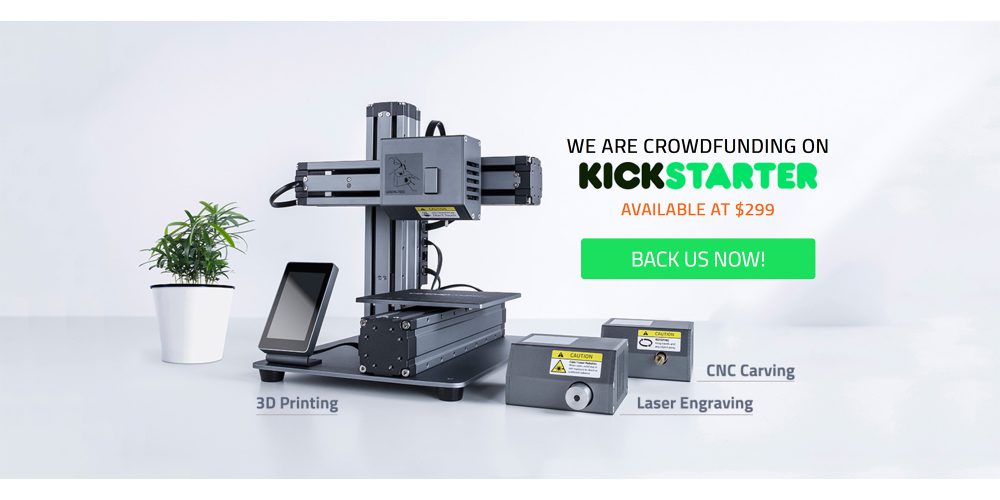 If you’ve grown fond of recent 3D printer developments, you may be interested in this Kickstarter project. Snapmaker is the all-metal 3D printer that lets the average user do just that, laser engraving, and CNC carving. The team currently has a prototype built and is looking for enough backers to speed up further development.

To understand their idea, let’s first grasp what 3D printers have been until now. Today’s 3D printers are large machines that take certain expertise and a lot of patience to work with. As amazing as they are, these bulky printing cubes are complicated, expensive, and limited in functions. It simply does not seem ideal for someone to attempt to set up a difficult-to-use DIY 3D printer kit or to limit ourselves by using the standard plug-and-play 3D printer.

The Snapmaker team hopes to make it all better with this idea to create an all-metal 3D printer for everyone, at an affordable price.  This desktop-size combination of a 3D printer, laser engraver, and CNC machine is something to be excited about.

As for the specs, we have here an entire metal machine that promises an outstanding 3D printing experience. All major components of the printer are CNC machined, so thats a pretty meta idea right there. It’s 11.4-inches tall, 10.7-inches wide, and weighs 10 pounds. The print head has a travel speed of 10-150 MM/S and the printer supports materials such as PLA, PVA, ABS, Nylon, and more.

The Snapmaker team is proud of its design of a new type of linear module, which can be used in any of x, y, z direction and performs high precision linear motion. This further allows for extreme precision and high quality printing with excellent details. According to the team, the Snapmaker prints at a  resolution as fine as a $1,000 3D printer does, at a fraction of the cost.

As an easy-to-use, software equipped touchscreen 3D printer, this has the potential to really change the way we live. Not only will we be able to easily build physical models of ideas we may have, but people can also use this on the daily as a means of creating common household items. Regular people can have their own desktop factory.

If you’re convinced, pricing starts at $299 for September delivery on Snapmaker’s Kickstarter page.