Last night Microsoft took the stage at E3 to unveil its new Xbox One X console alongside over 40 new titles. As you’d expect, other manufacturers are using this platform to roll out fresh accessories too. Seagate has been making Xbox One-specific hard drives for some time, and it has now introduced a new massive 8TB external storage option that will significantly expand the console’s storage capabilities.

Dubbed the Game Drive Hub, Seagate’s latest has a handful of features meant to aid hardcore Xbox gamers. That includes a unique USB 3.0 hub design that’s borrowed from some of its desktop drives. Full details below.

A few years back Seagate first turned its attention to Xbox One with its Game Drive 2TB external hard drive. Today’s announcement bumps that up to 8TB with eyes on boosting your consoles storage capabilities by up to eight times over.

The new Game Drive Hub uses the familiar design of Seagate’s desktop USB 3.0 hard drives. Two forward-facing ports allow gamers to plug in additional peripherals as well as additional storage if needed. It’s a nice touch that goes above and beyond the typical portable external hard drive you might’ve considered in the past.

Most Xbox games take up around 50GB worth of space when all is said and done. If you’re rocking one of the 500GB models, that can go very quickly. Xbox’s Game Pass subscription service and ever-expanding library of backwards compatible titles also lend itself towards storage issues. A full 8TB of storage should provide plenty of extra space for DLCs, new games, movies and all of your other favorite Xbox content. 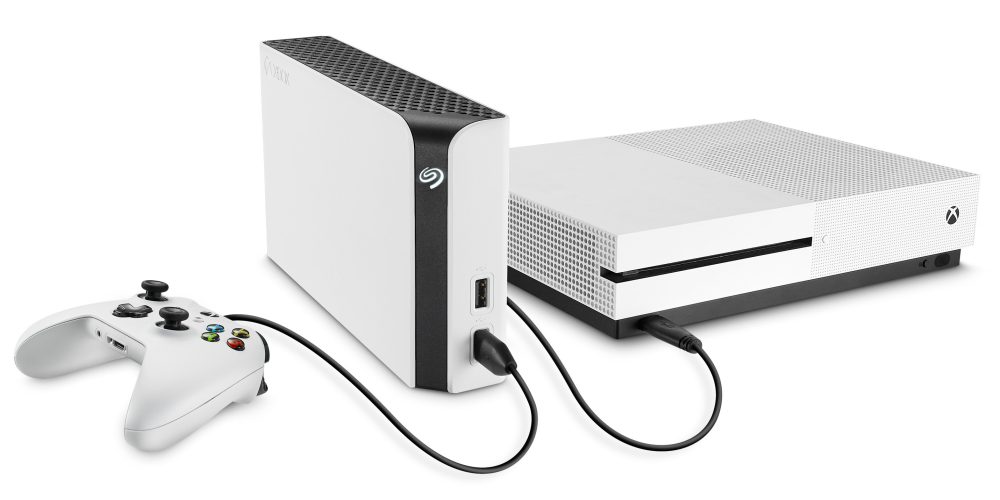 You’ll also note the Game Drive Hub’s sleek white design, which matches up nicely with Xbox One S and its clean look. There doesn’t appear to be any other colors coming day the line when it is released.

Seagate will ship the Game Drive Hub at $199.99 when it becomes available later this month.

In the meantime, if you’re in need of external storage for your Xbox there are plenty of other options already on the market today. Seagate’s new hard drive offers some nice features, but it’s also fairly large. I picked up one the Expansion 2TB portable drives last holiday season and it’s done the job just fine. It’s small design is perfect for tucking it back behind the console, and best of all, there’s no need to plug in the drive to an outlet as it’s bus-powered.

The month of June will undoubtedly go down as a great month for Xbox gamers. First, Xbox Game Pass went live at the beginning of the month, giving access to a regularly updated catalog of 100+ Xbox games. This week at E3 the next big Xbox titles will be revealed, making gamers further brim with anticipation. With Xbox Game Pass allowing direct downloads, and added games coming to the Xbox library, having enough space to enjoy all this greatness is critical.

That’s why Seagate took its latest storage solution for Xbox gamers to the next level. The new Seagate® Game Drive Hub for Xbox features 8TB of storage and a multi-purpose USB hub for players with massive game libraries—demanding peak game storage capacity for today’s most advanced games. Designed and tested in collaboration with Xbox, Game Drive Hub for Xbox works seamlessly with any console in the Xbox One family of devices (Xbox One, Xbox One S and Xbox One X).

Massive Capacity With 8TB of capacity Game Drive Hub for Xbox has plenty of room for 200+ Xbox games. This kind of space easily takes care of gaming storage needs and makes deleting old games a thing of the past. Plus all that extra storage space is useful for the sizeable game-save data and downloadable content.1

Dual Quick-Access USB 3.0 Ports Two front-facing USB 3.0 ports make it super convenient to charge controllers and mobile devices. Gamers can also connect other Xbox One accessories, such as steering wheels and even other Game Drives.

Easy Plug-and-Play Setup Fast and simple setup—no tools required. Xbox One automatically detects the drive when connected to the USB port and walks the user through the basic installation process. Setup can be completed within minutes.

Availability The Seagate Game Drive Hub for Xbox joins Seagate’s popular line of storage solutions for gamers. It will be available this month at select Seagate resellers for an MSRP of $199.99. Learn more at www.seagate.com.