This morning, Panasonic officially unveiled its new Lumix DC-TS7 camera, the first consumer-focused waterproof device of its kind to sport an electronic viewfinder. While GoPro has been offering integrated displays for sometime, this new option from Panasonic is decidedly more rugged. It’s built to withstand 6-foot drops and up to 220-pounds of pressure. That takes it to the next-level of action, with scuba divers and other extreme sports at the forefront of any design considerations here.

Panasonic has reimagined this new rugged camera from the bottom up, starting with a new body style. The admittedly old-school design is rated for dives up to 100 feet underwater. For comparison, the latest HERO6 from GoPro is rated for just 33-feet without any additional add-ons. The previous generation model from Panasonic was only spec’d for 43-feet, so divers are getting a nice bump all around here.

We mentioned off the top how its outer casing is designed to withstand drops up to 6.5-feet. But perhaps even more impressive is that the DC-TS7 is rated for temperatures as low as 14-degrees. Another example where Panasonic is going beyond what we’ve seen from other alternatives on the market today. 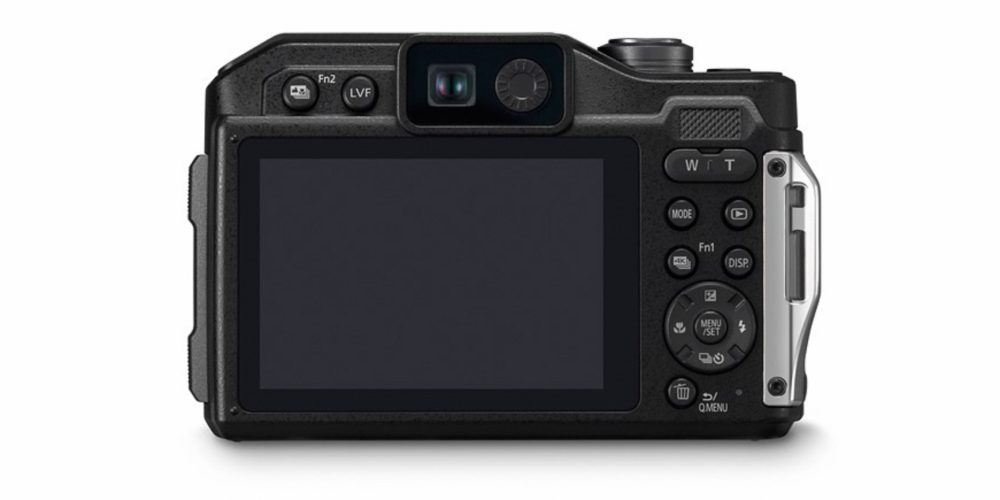 It’s becoming more and more rare to see viewfinders on compact cameras these days. Panasonic bucked that trend with an integrated three-inch display and a .2-inch viewfinder that includes 1,170k dots. A button on the side of the camera switches the device between the two displays.

Shooters will find a 20MP sensor that’s capable of capturing 4K video at 30 or 24fps. Dropping down to 1080p HD delivers slow-motion footage at 120fps, with the ability to shoot time lapses and stop-motion footage as well.

Like other Lumix cameras in the Panasonic family, 4K photo modes deliver the ability to grab still images at high-resolution and even change the focus point after the shot has been captured. A 4.6x optical zoom rounds out the list of notable features here, along with built-in Wi-Fi and a compass. Curiously, Panasonic has elected to leave out an integrated GPS radio on this new release, which seems like a no-brainer for a camera that’s meant for travel.

The new Lumix DC-TS7 is slated to ship this summer with a list price of $450 when it’s released. Panasonic will be offering it in black, orange or blue. There’s no word on what kind of accessories will be bundled, or available later for purchase, at this time. But we suspect there will be a slew of adapters and mounts available at some point.