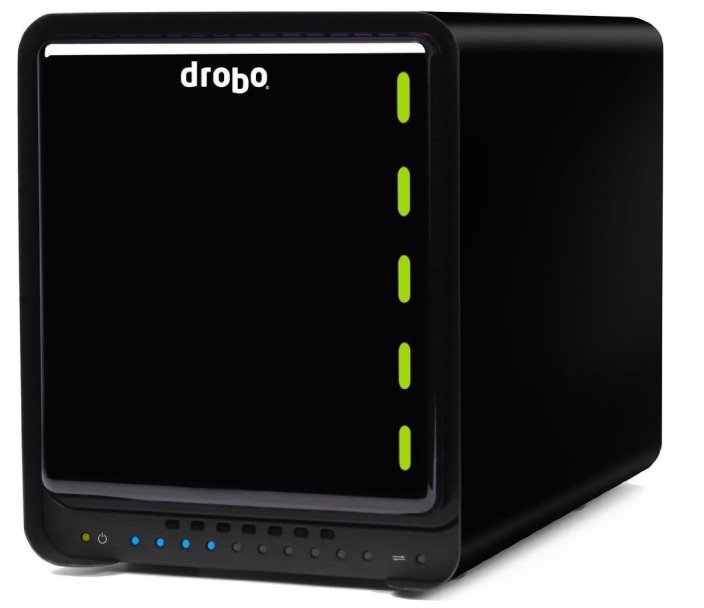 The Drobo has five storage bays, each of which can hold one standard 3.5 inch SATA I / II / III hard disk drives or solid state drives. It also has a Gigabit Ethernet port and data aware tiering, OS X Time Machine support, drive spin down, and dim lights. The Drobo lets you store and edit photos, videos, and audio files as well as store and back up all the computers on your network.

It received 4/5 stars from Amazon customer and positive reviews.

Drobo 5N 5-Bay Gigabit Ethernet Network-Attached Storage Array Single or dual drive redundancy. Data Protection and Expandability Made Simple Built on award-winning BeyondRAID technology with single or dual-drive redundancy, Drobo 5N protects your data without any user interaction, even in the event of multiple drive failures. Drives can be added or hot-swapped on-the-fly for storage expansion with zero downtime. If you’re running low on space, the lights on the front tell you what to do. Just add a drive in an empty bay or remove a smaller drive and replace it with a larger one.

Data-aware tiering technology accelerates performance of the storage array. View larger. Capacity and Performance Data-aware tiering technology, usually reserved for business class storage solutions, is also available in this networked Drobo. It intelligently uses the high performance SSDs to accelerate performance of the storage array, allowing applications such as Adobe Lightroom and Apple iPhoto or iTunes fast access to data. To keep capacity of the Drobo at a maximum, the Drobo accelerator bay accepts an industry standard mSATA SSD, leaving all five 3.5 inch drives bays available for high capacity HDDs. If getting the fastest performance possible is your thing, you can also load up every drive bay with SSDs. Drobo gives you the flexibility to choose.

Protection from potential power loss. Power Protecting Your Critical Data Drobo doesn’t just protect you from a drive failure, but also from potential data loss after a power outage. Often found only in arrays that cost tens of thousands of dollars, Drobo 5N includes a battery that protects all data in memory, or cache, that is, data on its way to the drives. When power spontaneously goes away, the battery keeps the Drobo alive long enough for the data to be written to non-volatile storage, ensuring your important information is safe. This battery recharges itself and is designed to last for the life of the product.

Compact, space-efficient design. Designed for You Drobo devices have always been space efficient and the Drobo 5N is no exception. It was designed from the ground up to provide very high capacity without taking up a lot of your valuable desk space. It is compact because of Drobo’s unique carrierless drive-bay design, allowing drives to be installed very close to each other. Drobo 5N is also significantly quieter than previous-generation Drobos due to its tuned, large, variable-speed cooling fan. You can even configure Drobo to spin down drives when they’re not in use to further reduce