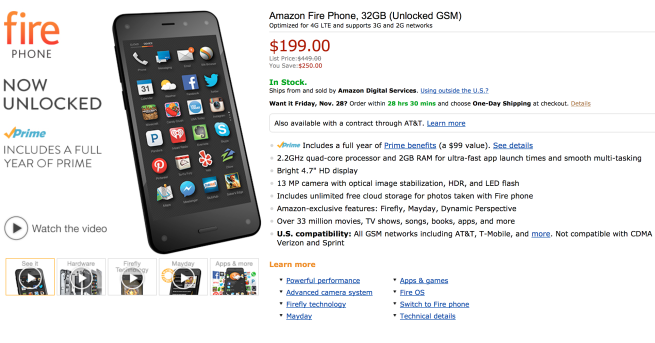 It seems that Amazon is finally throwing in the towel with its Fire Phone. After the hype leading up to its launch, Fire Phone has been struggling to stay afloat. It’s best to think of the Fire Phone as a smaller version of a Kindle Fire tablet, but with a few extra gimmicks and features thrown in along with a free year of Amazon Prime.

The Fire Phone may have been a disappointment to the market, but Amazon isn’t giving up on its attempt to push it into the hands of consumers this holiday season. The Fire Phone can now be purchased unlocked and off-contract for only $199 (32GB Version)…

Amazon initially launched the Fire Phone on AT&T with a price of $649 ($199 on-contract), but eventually lowered that price to $449 or $0.99 with an AT&T two year contract. It’s now apparent that even with the first wave of price reductions, Amazon isn’t selling enough of these. At this new $199 price point, it might be hard to pass up if you’re looking for a Prime membership and have an extra $100 to blow through.

Buying an unlocked Fire Phone for $199 will get you one year of Amazon Prime for free ($99 value). At the end of the day, you’ll come out with the benefits of a Prime membership and a smartphone that’s built to take advantage of them. Based on the initial wave of reviews, the Fire Phone was a bit lacking at launch, but a recent update brought it up to speed with improvements in important areas.

One major downside to the Fire Phone is that it’s not loaded up with Google Play. Because of this, you’ll need to invest in Amazon’s app store and services to truly benefit from anything it has to offer. That may not be a big deal to many, but if you’ve already spent some money with Amazon and other Kindle Fire products it may not be such a bad deal.

If you’re not familiar with the Fire Phone, it’s packing a quad-core 2.2GHz processor, Adreno 330 graphics, 2GB of RAM, a 4.7-inch 720p display (315 ppi), and a 13-megapixel rear facing camera. Its specifications are similar to those found in Samsung’s Galaxy Alpha, but the user interface and features will be unlike any other Android phone on the market thanks to the Fire OS skin and lack of Google services.

More information about Amazon’s Fire Phone can be found on its product page, along with pricing and availability. Given that it comes with a free year of Amazon Prime this isn’t a bad deal at all.