Why I still use a standalone camera: 6 Reasons why Sony’s RX100 IV makes for a great portable dedicated shooter 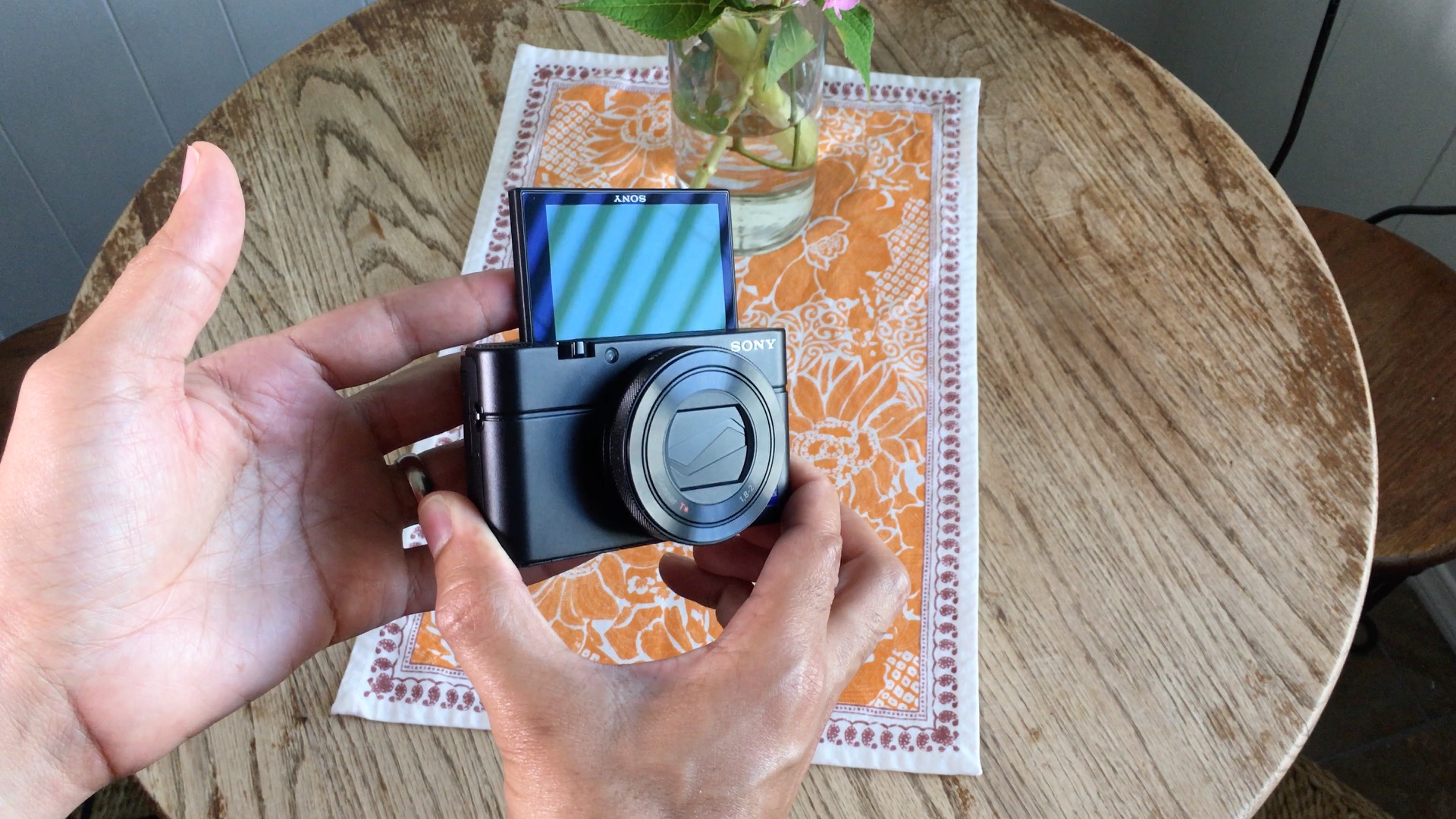 Modern smartphones are awesome for taking photos and videos, but I still prefer to use a standalone camera when I’m working.

I’ve had all sorts of cameras in past, most of them of the DLSR or mirrorless variety. The common thread with all of my past standalone cameras was that they were always much larger than the average smartphone.

After owning a phone with a camera for the last 10 years, I desired a standalone camera that featured similar portability. There are lots of pocketable point-and-shoots available on the market, but none of them check off as many bullet-points and feature the visual fidelity of Sony’s RX100 IV.

Sony’s venerable RX100 is legendary for the amount of features that it manages to jam inside of such a small form factor, and the latest model doesn’t disappoint.

Note: I feel obliged to note that the RX100 V will probably be announced any day now. It’s been a year since the RX100 IV debuted, so its follow-up shouldn’t be too far behind unless Sony decides otherwise. That said, prices for Sony kit tend to hover fairly close to original MSRP, so I wouldn’t expect any gargantuan price drops. If anything, the RX100 V will probably debut at an even higher price point if history is anything to go by.

These days it’s more rare to not have a camera on your person thanks to the proliferation of the iPhone and smartphones in general. The benefit of a smartphone camera like the iPhone is that it’s always with you, and it’s not burdensome to carry around due to its small size.

With a dedicated camera, I wanted to get as close to the iPhone’s pocket-ability as possible. If this happens to be your criteria, then the RX100 is a no brainer. You’re simply not going to find a camera with a comparable amount of features and visual quality in this small of a package. The RX100 is downright tiny, and can fit in a pair of jeans or a purse.

The biggest difference between an iPhone and a dedicated camera is the lens. The RX100 IV features an f1.8 24-70mm (crop-factor equivalent) Zeiss zoom lens that produces tack-sharp images along with that desirable shallow depth of field and bokeh. Smartphone lenses feature constant apertures and focal lengths that simply can’t compete with the flexibility offered by standalone cameras. 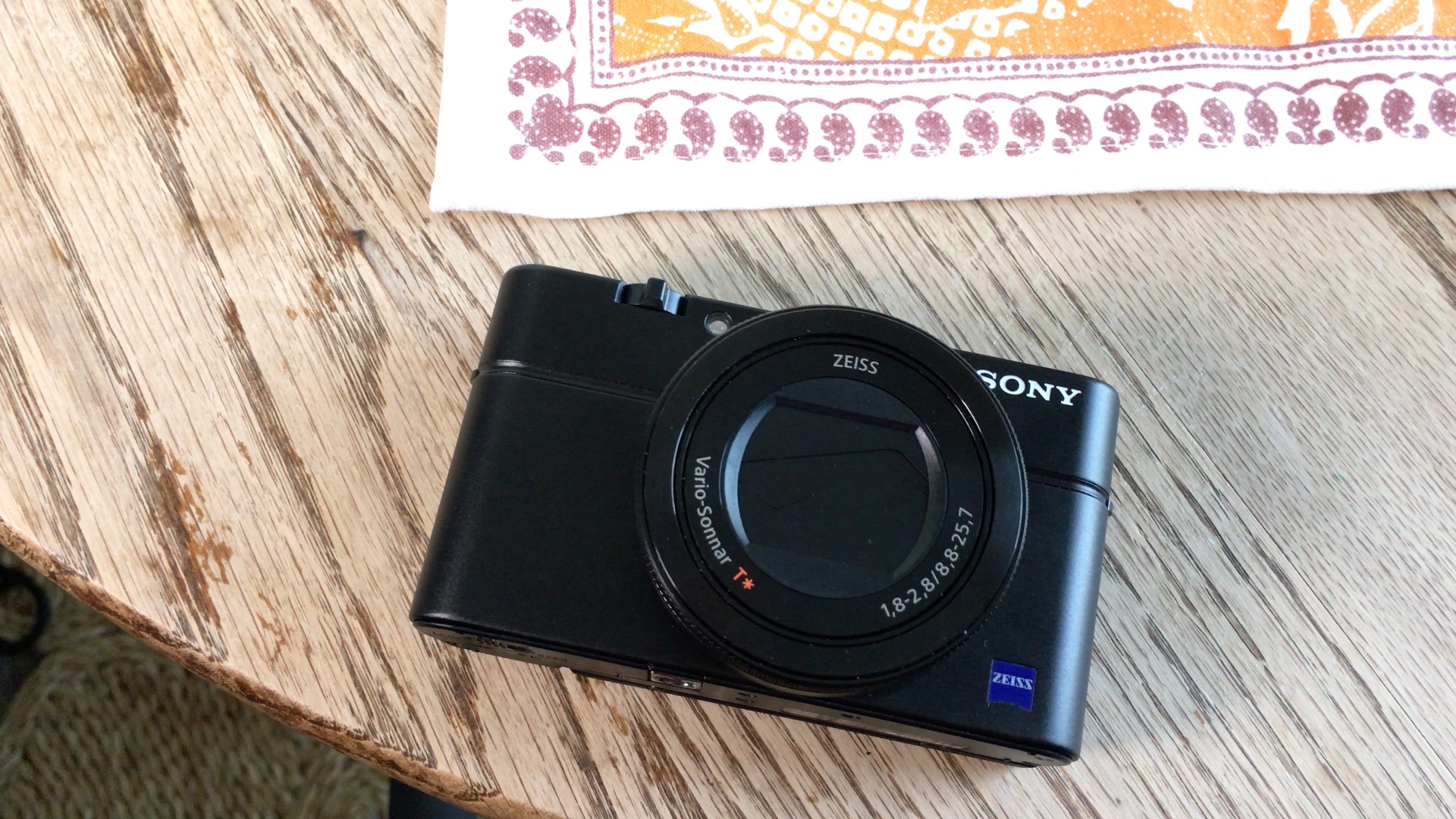 Being able to zoom in on a subject is another advantage that the RX100 has over smartphone cameras. The 24-70mm Zeiss lens doesn’t feature the range of some of the larger zoom lenses, but it affords framing flexibility that smartphone cameras simply can’t compete with.

The iPhone, and most other modern smartphones now shoot 4K video, and so will most modern standalone cameras. The RX100, with its 1″ sensor, shoots beautiful 4K video that looks like it was shot on a much more expensive camera. Much of this is thanks to the Zeiss glass, which is downright excellent. Sadly, the RX100 does have a 5 minute time limitation when it comes to shooting 4K video, but it’s great for shooting in quick bursts.

Unlike the Sony a6300 that we reviewed earlier this year, the RX100 IV comes with a 180º tilting screen that’s perfect for selfies. The screen doesn’t articulate from side to side, but I think I actually prefer the vertical tilt now that I’ve gotten used to it. Even if you’re not big on selfies, the tilting screen makes it much easier to compose shots while in front of the camera. It’s an excellent feature that shouldn’t be overlooked.

Of all of the RX100’s wonderful features, this just might be my favorite. If you’ve ever tried shooting video while outdoors in a bright setting, then you know how overexposed your photos and videos can get with the lens wide open. The solution to this is to use a neutral density (ND) filter. 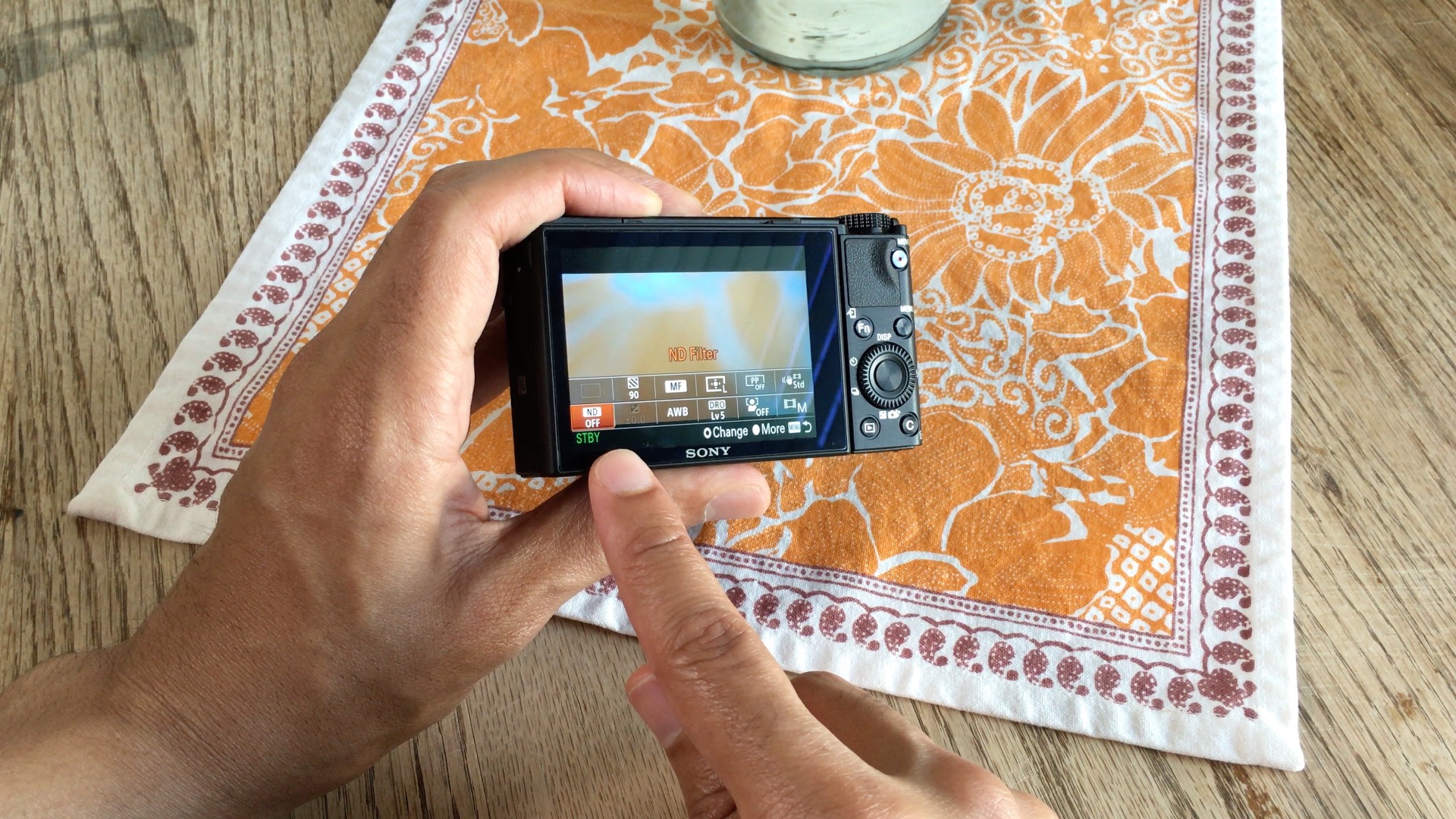 ND filters are akin to sunglasses for your lens. Just how real sunglasses allow you to keep your eyes open wide in bright sunlight, an ND filter allows you to keep the aperture wide open. This lets camera operators utilize shallow depth of field, even in bright settings.

Having a built-in ND filter means that I can activate the filter at the touch of a few buttons, which can be a big time saver. ND filters can be purchased separately and affixed to the front of most camera lenses, but having a built-in filter means I don’t have to bother using external filters in most scenarios.

Speaking of bright settings, trying to view a screen in bright sunlight is a fruitless affair. Most camera screens aren’t designed in a way that allow them to be properly viewed in bright settings. Fortunately, the RX100 comes with a 2,359k-dot SVGA OLED electronic viewfinder. The viewfinder isn’t as good as the one included with the a6300, but it’s still a marked improvement over the previous version of the RX100. 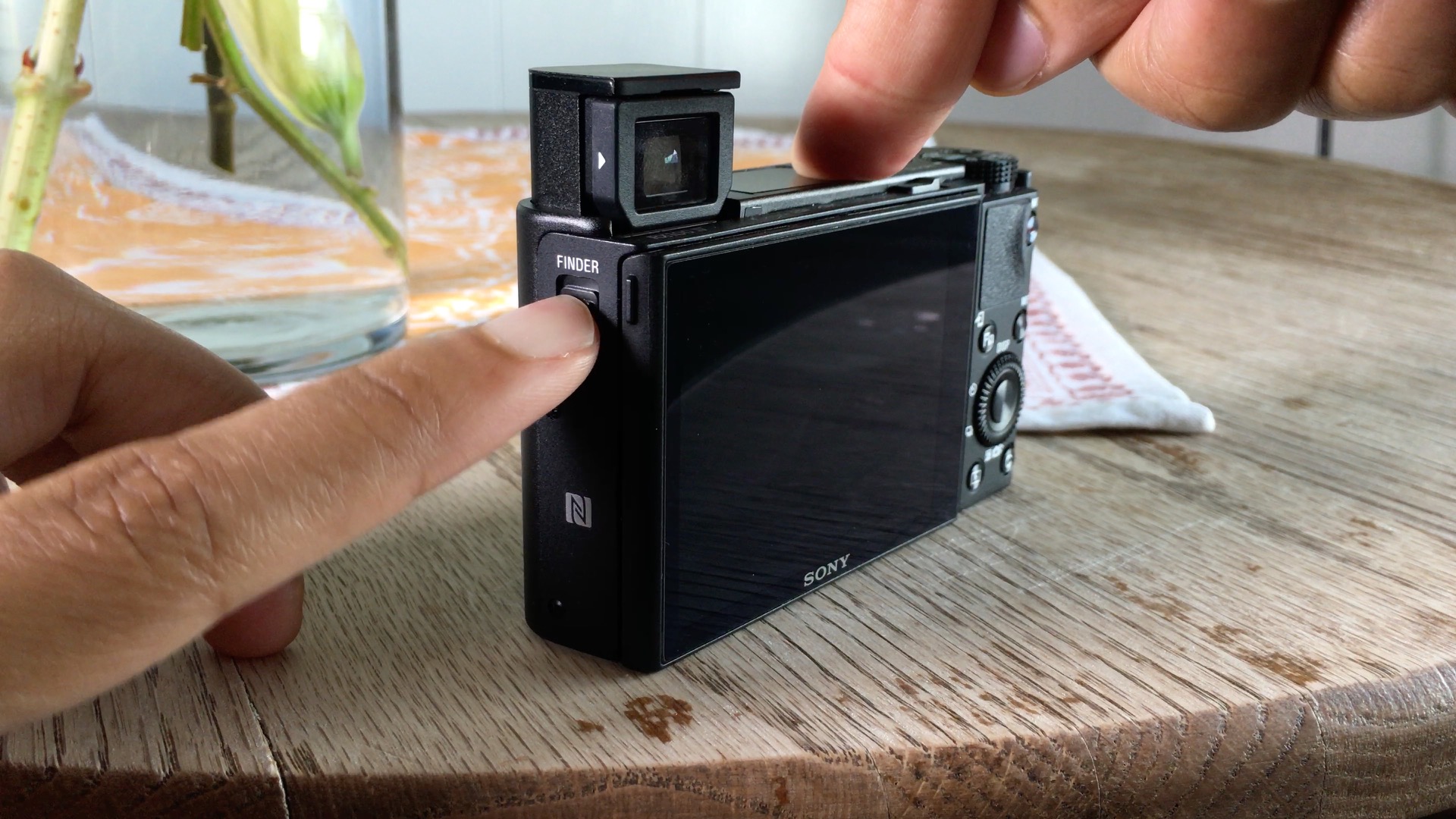 The RX100 IV isn’t perfect. Here are a few things I’d like to see addressed in future versions of the camera:

The RX100 IV is the first version of the RX100 to feature 4K video recording. Therefore, it’s no surprise that such a limitation exists. Because it’s so small, and shooting in 4K generates a significant amount of heat, Sony limits 4K filming to 5-minute intervals.

Even though I shoot in 4K in most situations, this limitation is not a deal breaker for me, because I shoot in bursts. I fully expect Sony to increase the continuous 4K shooting time in future RX100 revisions. 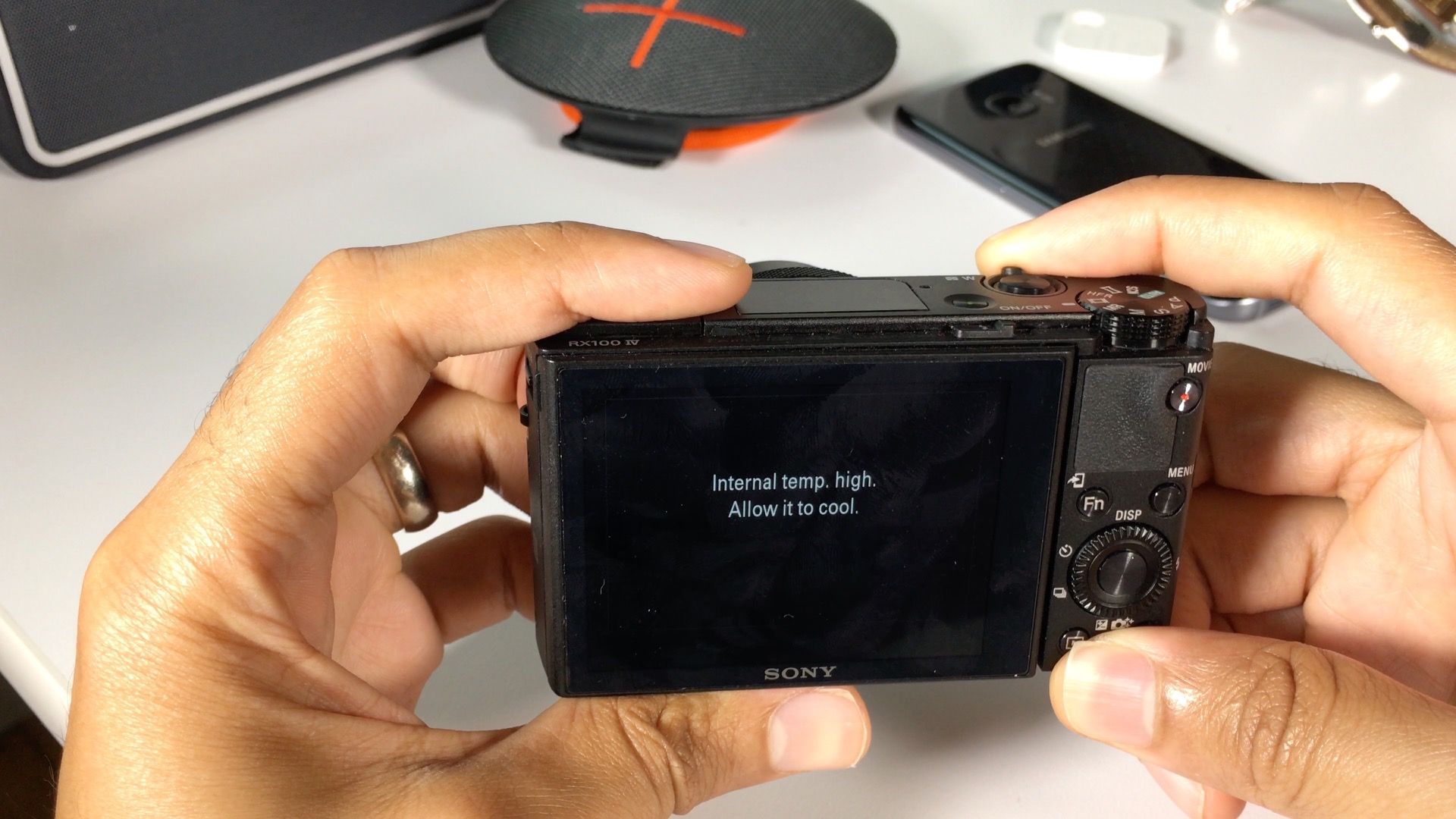 This is just a poor design decision. There has to be a way to allow users to access the SD Card and battery compartment without having to remove the camera from a tripod. I can’t tell you how much time I’ve wasted having to do this every single shoot. 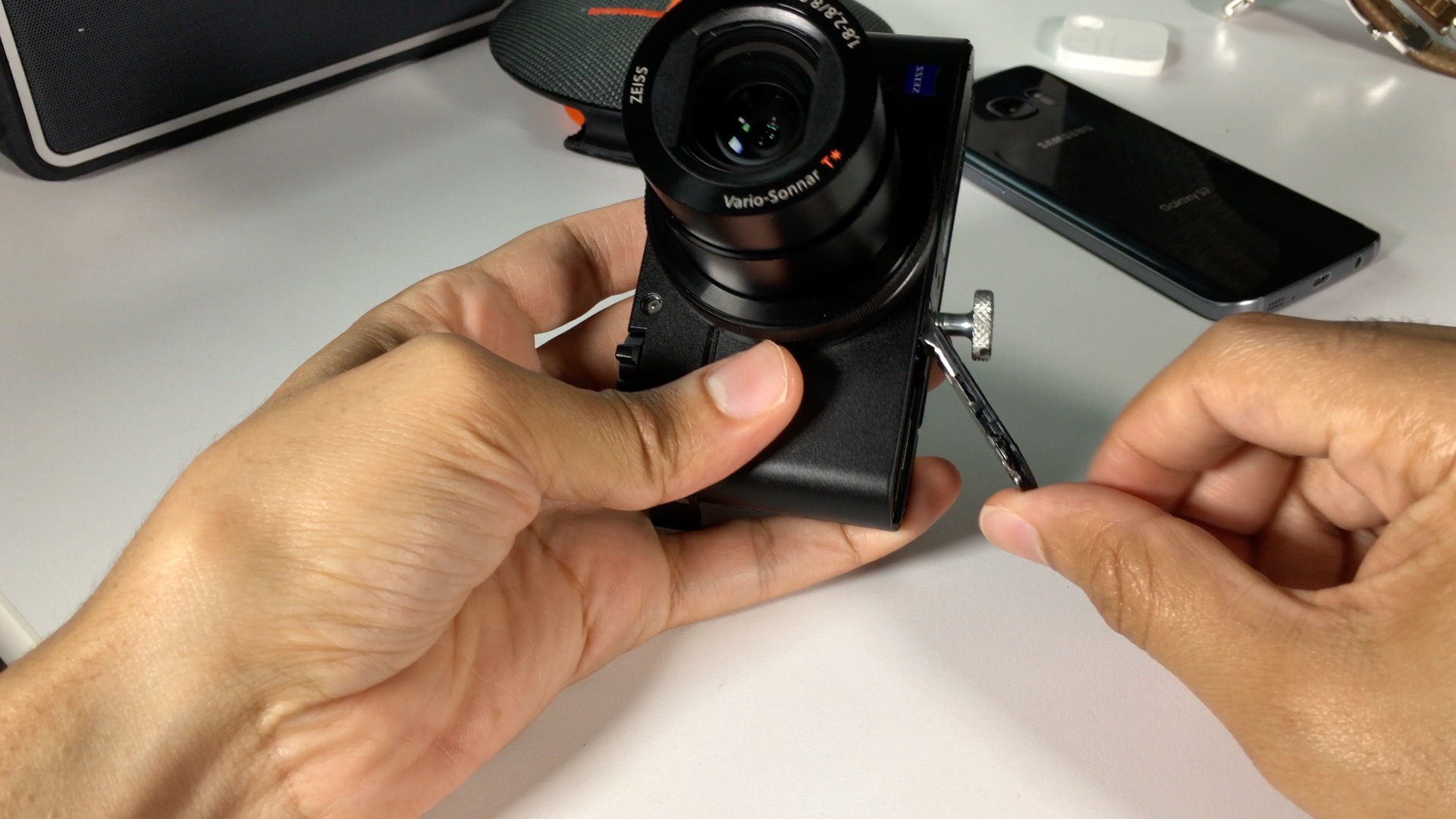 The RX100 IV’s f1.8 might sound awesome (and it is), but you won’t be able to stay wide open as you progress through the zoom range. The 24-70mm equivalent zoom range is also a big limitation for those used to swapping out lenses. Not surprising in the least, but it’s one of the downsides of having a fixed-lens camera.

All Sony cameras feature terrible menu systems and terrible Wi-Fi connectivity/file transfer options. This is not an issue that’s unique to the RX100 IV, but it’s an issue that I wish Sony would address. 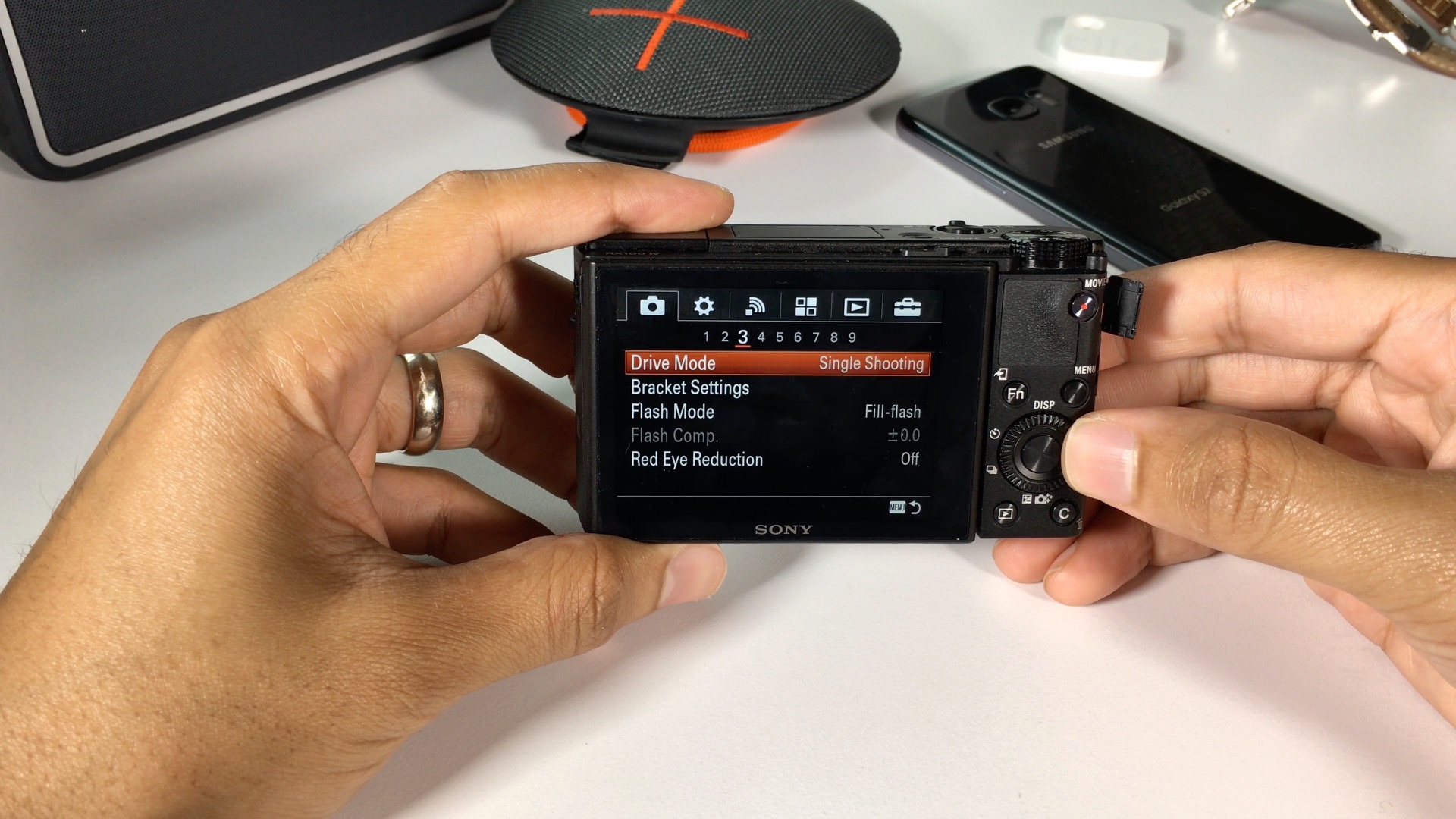 The RX100 IV ($948.00 on Amazon) is my favorite standalone camera of all time. It has limitations, but it’s totally possible to work around those limitations if you’re dedicated to doing so. Never before has such a complete package been stuffed into such a small form factor. 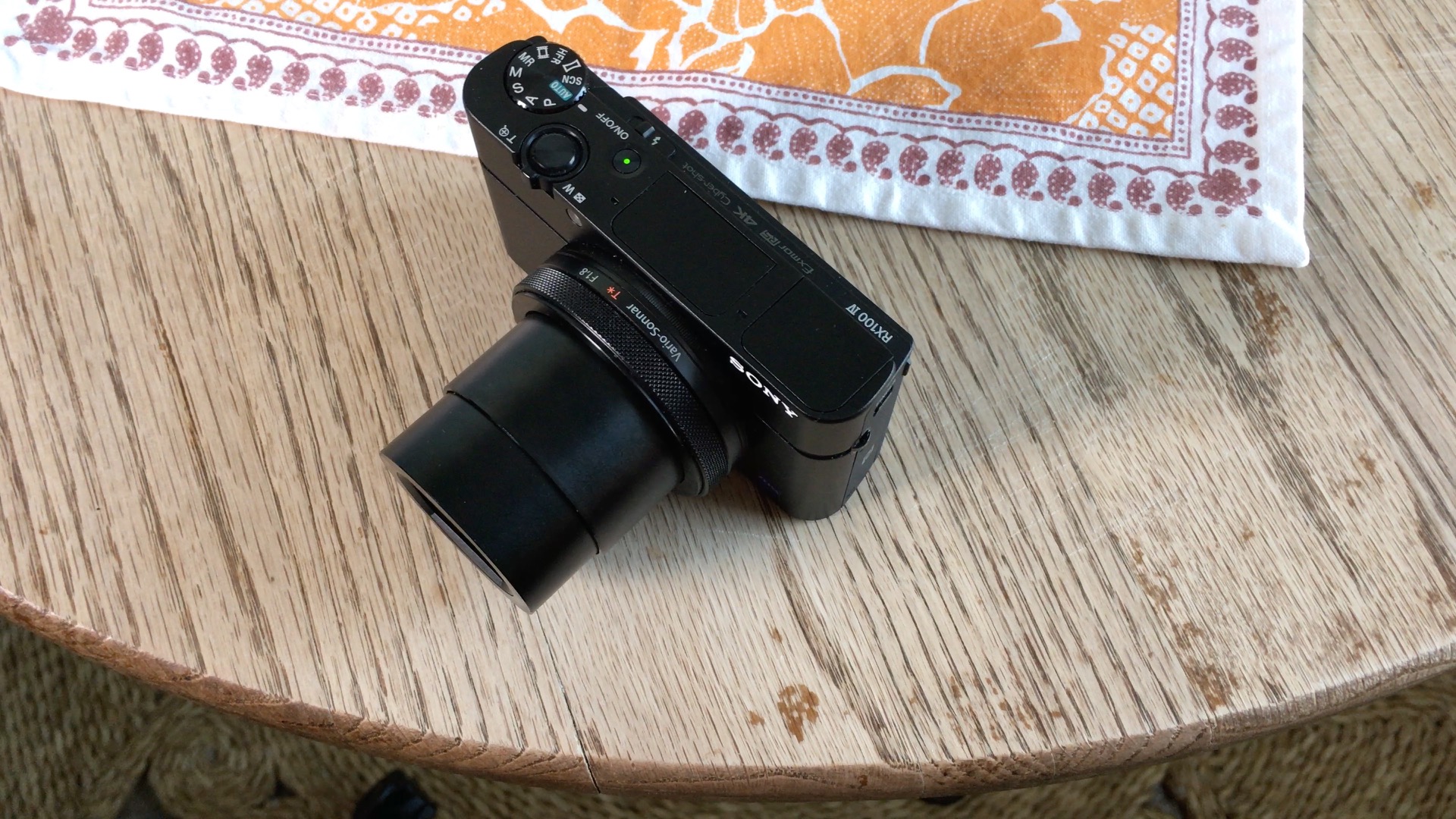 The fact that I can shoot 4K videos and manage an entire YouTube channel with just this one camera speaks volumes for its ability, and I’m literally just scratching the surface. The RX100 IV is much deeper than the items I’ve presented in this post. Perhaps I’ll come back with a follow-up post sometime down the line and share a few of my best practices.

Keep in mind that the RX100 IV was released a year ago this month, so a refreshed model should be appearing sooner than later. When Sony refreshes cameras in the RX100 line, it usually keeps the older models around at a cheaper price. Here is a list of all of the RX100 models below with their respective prices. Note that only the latest model shoots 4K.

Do you use a standalone camera along with your smartphone’s camera? If not, would you ever consider investing in a dedicated shooter? Sound off in the comments below with your thoughts and opinions.