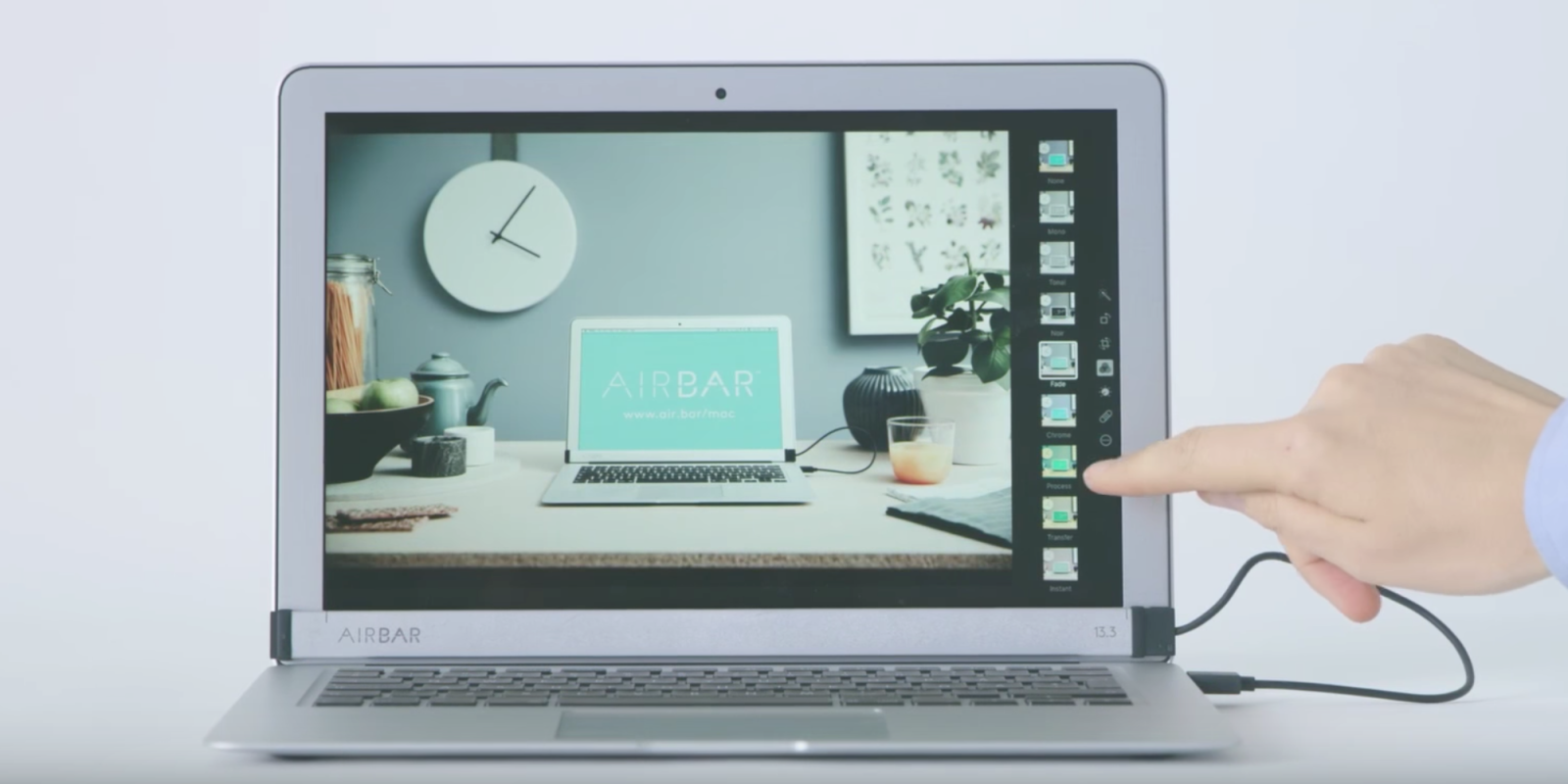 Neonode is the maker of the AirBar accessory that brings full touchscreen capabilities to otherwise standard laptops. The simple add-on attaches to your machine via USB and magically allows you to control just about every facet of OS X directly through touch gestures on your display. Today, the company is set to debut the latest model AirBar for Apple’s 13-inch MacBook Air…

Originally debuting at CES, AirBar for MacBook Air is a small brushed aluminum bar that nicely matches Apple’s aesthetics. It attaches to the bezel area along the top of the keyboard/bottom of the screen magnetically and attaches to your system via USB. From there, we can swipe, scroll, touch, pinch/zoom and tap-to-select just about anything on the display. It can understand any number of gestures that disturb the light field omitted by the small aluminum AirBar and its “AlwaysOn” sensors.

The system makes use of something known as zForce AIR. A patented technology that allows the AirBar to read everything from your fingers and a stylus to paint brushes or gloves.

It does seem a little late to the party, considering it is only available for Apple’s 13-inch MacBook Air with no mention of the MacBook Pro. While the AirBar would likely need a redesign to work on a Touch Bar machine, it would be have been nice if Neonode had offerings available to all MacBook users.

Here are some more details from Neonode:

We’ve seen an overwhelmingly positive response from the Apple community since our big debut of AirBar for MacBook Air at CES this year…Other Apple devices, such as the iPhone and iPad, have helped consumers become accustomed to a range of touchscreen products for several years now. It’s a natural progression for MacBook Air to have touchscreen capabilities, and we are thrilled to provide Apple enthusiasts with this completely new way to interact with their MacBook Air notebook.

Nonetheless, Air users are certainly in for a treat here. AirBar for MacBook Air 13.3-inch goes for $99 and the new AirBar for Windows 10 (13.3, 14 and 15.6-inch) retails for $79. Neonode also notes that AirBar will be available in all 34 Fry’s locations and a series of authorized Apple resellers across the country for the very first time. However we are already seeing listings pop up on Amazon.

In other Apple related news, the Back to School event will offer up free Beats headphones with eligible Mac or iPad Pro purchases.