Known for its consumer networking gear, TRENDnet is announcing the latest addition to its lineup of home WiFi devices. The new THA-101 Home Smart Switch is a hybrid network extender and basic smart electrical outlet that looks to offer the best of both worlds in one small package…

The THA-101 features a “powerful” built-in N300 wireless extender with speeds of up to 300 Mbps. By simply plugging the unit into an area of your home or office where there is a low WiFi signal, the device will connect with your existing wireless router to boost the signal in that area as well as extending it out further.

Once you have it plugged in and broadcasting a strong WiFi signal, it will essentially double as a smart wall outlet with simple iOS and Android control. There isn’t a deep set of smart features here, but you will get the basic on/off control of any basic electronics devices (lights, fans, sound systems, etc.) on your smartphone or tablet, as well as your usual auto scheduling options. TRENDnet also notes that users can control “multiple” THA-101 units from within the iOS/Android apps. 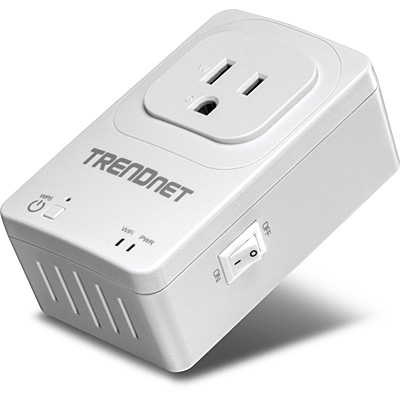 Along with what the company calls a simple app-based installation process for the WiFi extender side of things, there is also built-in “overcurrent protection” which will shutdown the electrical power to the switch if the device detects any sort of surge. The free iOS control apps will not only control the power of the switch itself but also provide real-time power consumption data to the user.

The new THA-101 Home Smart Switch with Wireless Extender has a suggested retail price of $79.99 and a 3 year limited warranty. While you can already find highly rated network range extenders for around $30 and smart wall plugs from $42 or less, we will likely see the THA-101 drop in price at some point early next year. TRENDnet notes the new smart extender as being ready for pre-order from online and retail partners, but availability seems to be quite limited at this point. However, there is a temporarily sold out listing on Amazon for just $54, so you can lock in discounted pricing if you so choose.

Place the THA-101 in a location where there is still two bars of home wireless signal strength from an existing wireless network, displayed on a mobile device. Plug in the THA-101 and follow a quick app-based installation. The powerful built-in N300 wireless extender then broadcasts a strong wireless signal to an area of your home with low or no wireless coverage.

Plug in a light, fan, or appliance into the electrical outlet on the front of the THA-101 and use the free Apple® or Android™ mobile app to turn the outlet on/off from a mobile device with an Internet connection. Users can also use the app to create a weekly on/off schedule, with varying daily on/off times, so that lights are on when returning home or to give the illusion of being home.

“The THA-101 is easy to install,” stated Sonny Su, TRENDnet technology director, “and the app can manage multiple THA-101 units to control lights, fans, and other devices.”