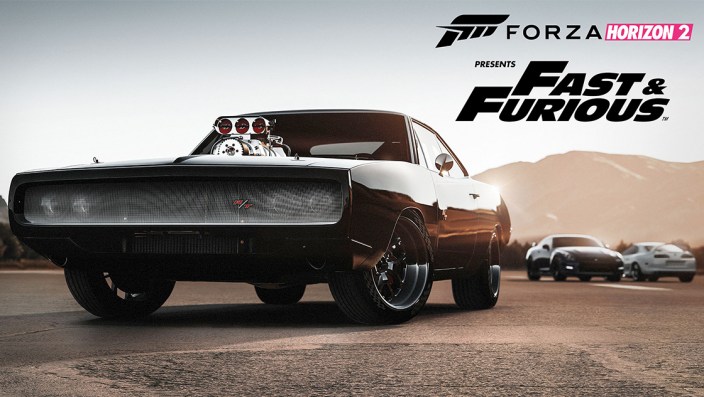 To celebrate the upcoming theatrical release of Furious 7 this April, the latest in the long-running Fast & Furious film franchise, Microsoft is teaming up with Universal to “ bring a unique, interactive, and exclusive experience to millions of Xbox fans worldwide.” That experience is coming in the way of a new standalone expansion pack for Forza Horizon 2, that puts players into the world of the upcoming film.

Featuring more than 11 “iconic” vehicles from the movies (see below), players will be tasked with acquiring new cars in the south of France “for the Fast & Furious crew’s next big mission.” Along with a series of car challenges, unlockables, and sharing via the Forza website/Xbox One Hub app, there will also be free roaming across the south of France and voice work from actor/artist Chris “Ludacris” Bridges as Tej Parker, your expert mechanic.

Forza Horizon 2 Presents Fast & Furious will be available as a free download on Xbox One and Xbox 360 for a limited 2 week period from March 27th through April 10th. After that date the expansion will run you $10, but those who snagged it for free “can continue to play without restriction.”

Here is a list of some of the vehicles found in the game:

For more game deals, keep an eye on our daily roundups for all the best disocunts across every platform.

Xbox and Universal Partnerships & Licensing have announced an unprecedented partnership to bring a unique, interactive, and exclusive experience to millions of Xbox fans worldwide. For the first time ever, the thrilling driving and amazing cars of Forzaare combining with the unstoppable “Fast & Furious” movie franchise to create an original adventure filled with high-speed automotive action in Forza Horizon 2 Presents Fast & Furious.

As you complete game challenges, you’ll unlock new cars that you can drive throughout the open world in free roam play. You’ll also be able to take photos of your favorite cars and share them with fellow Forza players via the official Forza website and the Forza Hub app exclusively on Xbox One.

“Forza is synonymous with racing and fun, so it’s only natural for us to work with one of the most celebrated action franchises in the world,” said Phil Spencer, Head of Xbox. “This is a great way to bring Forza players into the world of ‘Fast & Furious,’ and inForza Horizon 2 Presents Fast & Furious, every fan will get a chance to go wheels-first into the exciting action of the ‘Fast & Furious’ franchise.”

“‘Furious 7’ is our biggest ‘Fast & Furious’ movie yet, and partnering with the world-class team at Turn 10 Studios offered an exceptional opportunity to thank our millions of passionate fans in an exciting way and to immerse them in an interactive experience that is both visually stunning and adrenaline-charged,” said Bill Kispert, Executive Vice President, Worldwide Digital Platforms, Universal Partnerships & Licensing. “In this adventure, fans will experience the thrill of the ‘Fast & Furious’ series’ most iconic cars through the amazing gameplay of Forza, and we couldn’t think of a better combination for gamers and movie fans alike.”