Anker mega-review: PowerCore+, PowerDrive+, and PowerPort+ USB Quick Charge 2.0 & 3.0 gear is some of the best money can buy

Anker is one of a few big names in USB accessories, and there’s a reason for that. This week I had the chance to use several of the company’s PowerCore+ power banks (there are a lot of different offerings spanning many capacities), as well as a PowerPort+ wall charger, and a few different PowerDrive+ car chargers. There are many brands of chargers and power banks out there, and while the experience you get may be similar across the board (yes, there are many chargers and power banks out there just as good as these), Anker goes above and beyond to bring you a package that’s just very high-quality…

The clear star of the show of all of these products is the PowerCore+ 20100 USB-C, which, as its name suggests, supports USB Type-C. With the 12-inch MacBook soon to get a refresh, many years of support from the Chromebook Pixel line, and several Android handsets set to get USB Type-C with this year’s refresh, having USB-C on a power bank is nearly becoming a necessity. Our own Jeremy Horowitz wrote up an in-depth review of this particular power bank late last year over at 9to5Mac, and a lot of what he said is still true. For owners of pretty much any USB-powered device, this power bank is one of your best options.

The PowerCore+ 20100 USB-C power bank offers what many power banks don’t: on top of bringing enough juice to power your iPad mini, iPad Pro, Nexus 9, or Chromebook Pixel more than once, the PowerCore+ has a svelte black aluminum body that just feels really good to hold and bring with you wherever you go. It just a has very premium feel with its chamfered edges, solid weight, and a texture that’s a lot like an aluminum Apple product. With the PowerCore+, you don’t have to worry even a little bit about reliability. And compared to the slightly beefier 26800 PowerCore+ that I also tested this week, the PowerCore+ manages to fit everything into a package that — while not small by any definition of the word — feels compact due to its longer and thinner form factor.

My favorite part of this power bank is the power button on the top. There are 10 tiny LEDs that light up to show the battery’s capacity, and when you’re charging the bank the lights blink to show its progress. You charge the power bank using the included USB A to USB-C cable, but it’s worth noting that the USB-C port can also be used to charge other devices. I charged my Nexus 6P using this port at about the same speed that it would charge if plugged into the wall, and using the standard USB ports to charge my other Qualcomm QuickCharge 2.0 devices seemed to take advantage of the bank’s “PowerIQ” features (which detect the device that’s plugged in and sends just the right amount of current) to charge them rapidly as well.

The PowerCore+ 26800 is the higher-capacity brethren of the above PowerCore+ 20100, but while it does pack substantially more juice for your more power-hungry devices like an iPad or Android tablet, the power bank has a few drawbacks. First of all, it’s heavier and bigger than the 20100. If you’re looking for something light and slim, I wouldn’t really recommend either of these higher-capacity power banks (there’s something for that category below). But I most definitely wouldn’t recommend this one. It’s not unwieldy, but I wouldn’t carry it around on most days.

The PowerCore+ 26800 also forgoes USB Type-C. As I mentioned above, USB Type-C is going mainstream starting soon, and unless you own only devices that use Apple’s lightning connector (which would take advantage of Anker’s PowerIQ technology), you’re really going to want to have USB-C on a power bank that you’re spending 50 or more dollars on. That said, the PowerCore+ 26800 makes up for this drawback with some advantages. First, you get a third USB port so that you can charge another device, and that third USB port is a Quick Charge 2.0 port for your Android phones. 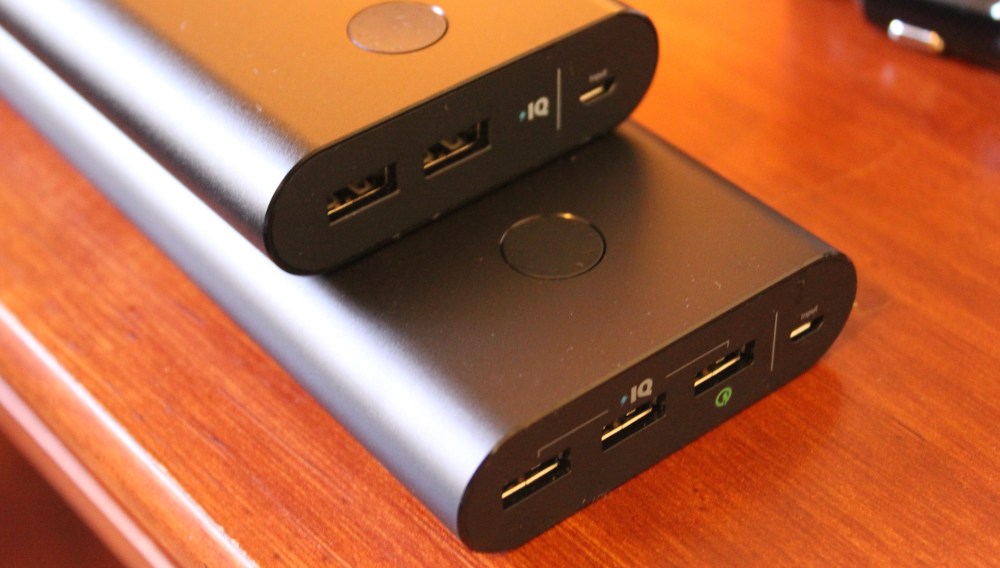 Besides these differences, however, the 26800 has all the upsides of being in the new generation of PowerCore+. The power bank has the previously-mentioned aluminum build, as well as the circular LED power button on top. The PowerCore+ 26800 power bank, while it does go for a steeper $80 shipped, comes with a nice 18W Quick Charge 2.0 Charger to juice it up as fast as possible. Once it’s fully charged, this thing can fully charge an Android phone or an iPhone several times, as well as an iPad a few times at the very least.

If you’re looking for something that’s a lot more portable (although with much less capacity), Anker offers both the PowerCore+ 10050 and the PowerCore+ 13400. The smaller of the two, the 10050, is small enough that you can carry it around in a purse or bag with no problem. Of all of these power banks, the 10050 is actually my daily go-to, because it charges super quick, holds enough power to give any of my phones a full charge or two, and doesn’t add much weight to my bag. It doesn’t make sense not to carry it around with me, especially if I’m at an event like CES or Mobile World Congress. 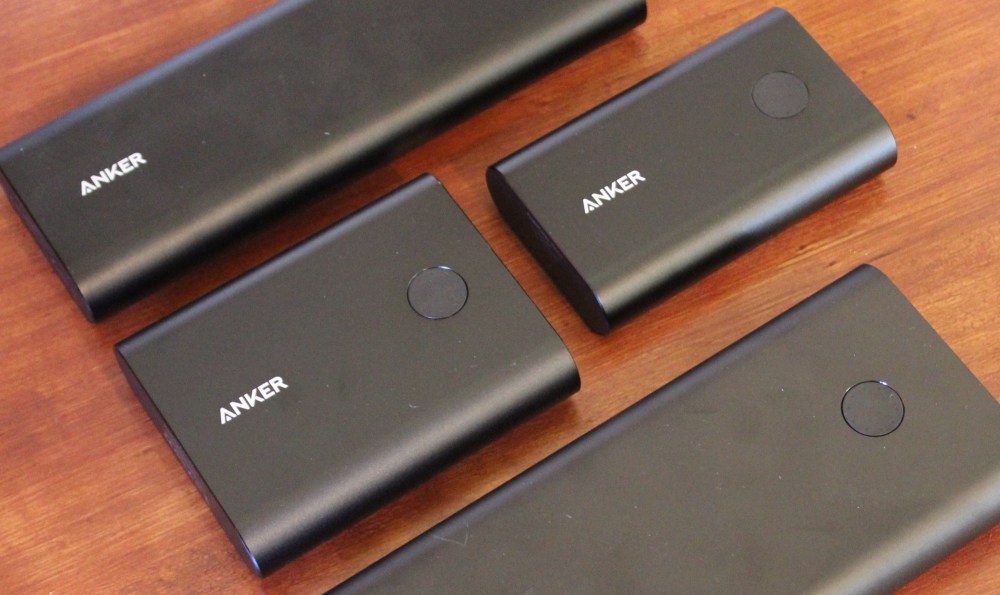 The more mid-range PowerCore+ 13400 is pretty much just a larger version for those looking for a bit more capacity. They’re not much different in weight, and in fact, they’re not much different in any way at all. They both pack the same black aluminum of all the other power banks on this list, as well as PowerIQ and their included traveling pouches. Besides capacity (which is a good 30% or so more with the 13400), the 13400 simply adds another PowerIQ USB port for charging two devices at once. If you’re like me, though, the chances of needing to recharge two devices at once during a typical day isn’t likely. 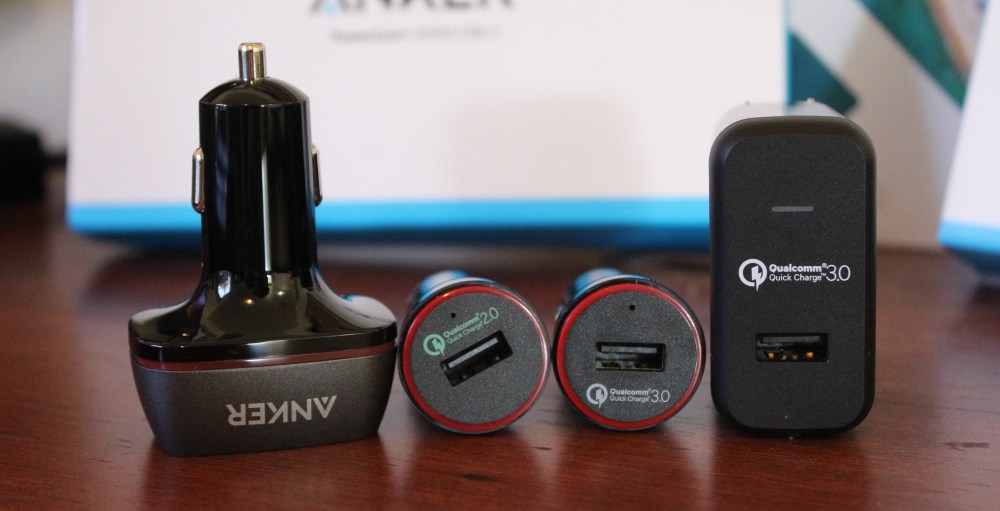 Right off the bat, I gave the PowerDrive+ 2 (which is the car charger all the way to the left in the above image) a run in my car. As someone who has never paid a few bucks to put a decent car charger in my car (I’ve always just used the cheap ones that you get at the checkout line at a grocery store), I was immediately really happy. Not only did the PowerDrive+ 2 charge my device (in this case a Nexus 6) at Quick Charge 2.0 speed, but it has two USB ports as well. I had similarly good experiences with the standard PowerDrive+ 1 chargers, which are basically the same experience but with only one port.

Keep an eye out next month for more on these Quick Charge 3.0 accessories.

Overall, I was really happy with all of these products, and I think Anker prices them fairly. If you’re looking for a premium power bank, the PowerCore+ line is absolutely my pick. The price may be a bit higher per mAh of capacity compared to other offerings, but Anker’s features such as PowerIQ, MultiProtect (which includes surge protection, sleep mode, temperature protection, and more), VoltageBoost (which maintains the fastest speed possible no matter which cable you used), the included 18-month warranty, as well as an awesome premium aluminum build, all more than make up for the difference.