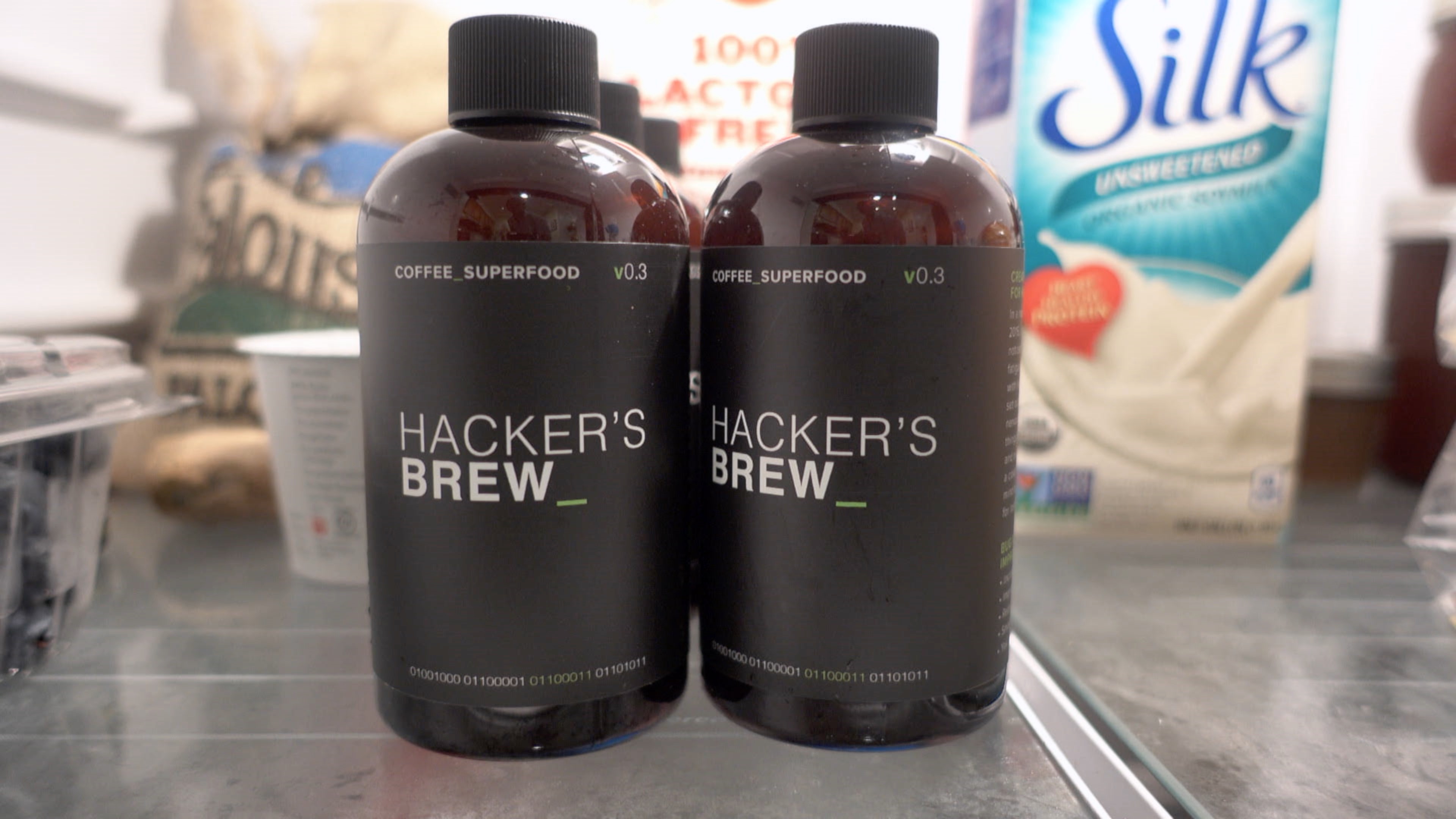 I’ve seen Hacker’s Brew — a cold coffee drink geared towards making you more productive — discussed online for quite some time now, but I never got to try it for myself until recently. I’ve always been attracted to the look of the product, so I was thrilled when the team reached out to me to take it for a test drive.

The whole premise behind the drink is that it goes beyond the boost of caffeine obtainable by a typical trip to Starbucks, and provides a more sustained energy increase that can help with productivity.

The problem with most espresso-based drinks, at least for me, is that the effects tend to be very short-lived, and the crash that occurs thereafter can actually hurt my productivity for the rest of the day.

Hacker’s Brew, on the other hand, seeks to combine coffee with other ingredients for a more sustained cognitive boost of energy and mental stamina. Does it work? It’s hard to speak authoritatively based on my six-drink trial, but I can definitely attest to the fact that it makes me more productive than a typical espresso-based drink at Starbucks does.

The folks at Hacker’s Brew are heavily invested nootropics — a wide-ranging class of cognitive-boosting drugs that claim to enhance productivity, short-term memory, reaction time, the whole nine yards. All of this, supposedly, without negative side effects.

Instead of providing users with a short-term boost that quickly wears off, or a boost over the long-term without any short-term benefits, Hacker’s Brew aspires to do both.

The name “Hacker’s Brew” is thus a sort of play on words, and at the same time pays homage the the company’s CEO, Elias Ladopoulos. Well-known in hacking circles, Ladopoulos co-founded the Masters of Deception hacking group — a group that became the target of the FBI and Secret Service’s ire in the early 1990s.

Granted, research on nootropics is still relatively young, and it’s classified as your typical non-FDA-approved supplement, so your mileage may vary as far as results are concerned.

Though I don’t have any scientific research to back up my personal experience, I can report that a bottle of this stuff did give me an immediate boost of energy, similar to a cup of coffee. It also provided me with sustained energy without the usual crash associated with a typical espresso drink. 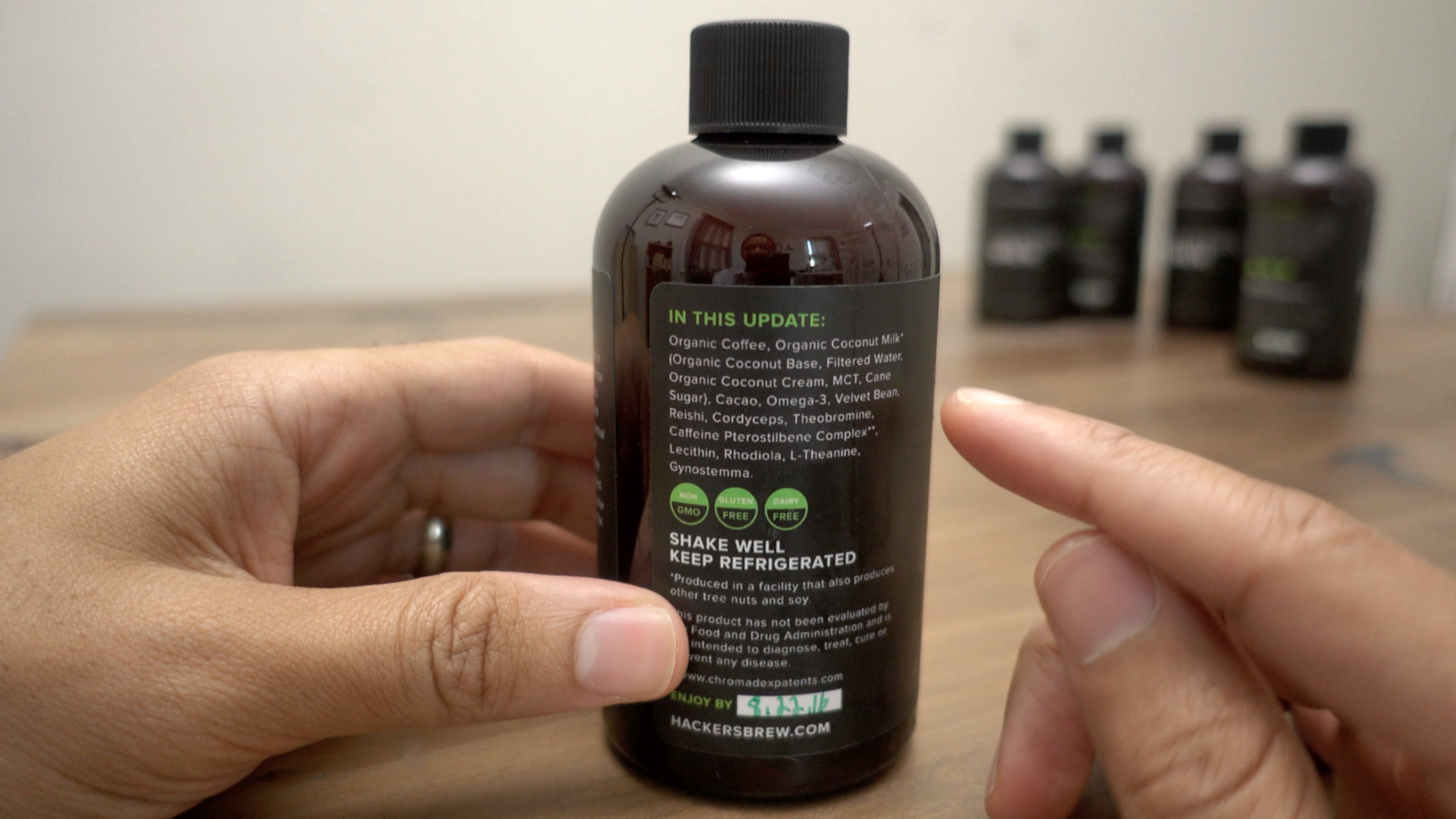 True, there are lots of energy drinks on the market that claim to increase productivity throughout the day, but the great thing about Hacker’s Brew is that its primary ingredient is coffee — it’s essentially iced-coffee sweetened with coconut milk. The formula contains additional ingredients geared towards increasing the half-life of the caffeine in the drink, and thus extends its effects over the long-term without the undesired crash.

The taste and texture

Hacker’s Brew is a cold-brewed drink that ships in perishable single-serving bottles, so you’ll need to refrigerate it immediately upon arrival. Each hand-crafted bottle is produced in limited batches and lasts 14-days. There’s even a hand-written “enjoy by” date written on the back of the label.

The primary ingredients — organic coffee, coconut milk and cacao — provide a smooth taste that’s not at all unlike an iced-coffee drink served by your local barista. Hacker’s Brew can be consumed straight from the bottle (my personal preference) or poured over ice.

The drink is smooth to the palate, though you’ll definitely want to make sure that you shake it up well before consuming. Otherwise, you may encounter some graininess from unmixed and undissolved ingredients — I made the mistake of doing this once, and the results weren’t very pleasant. 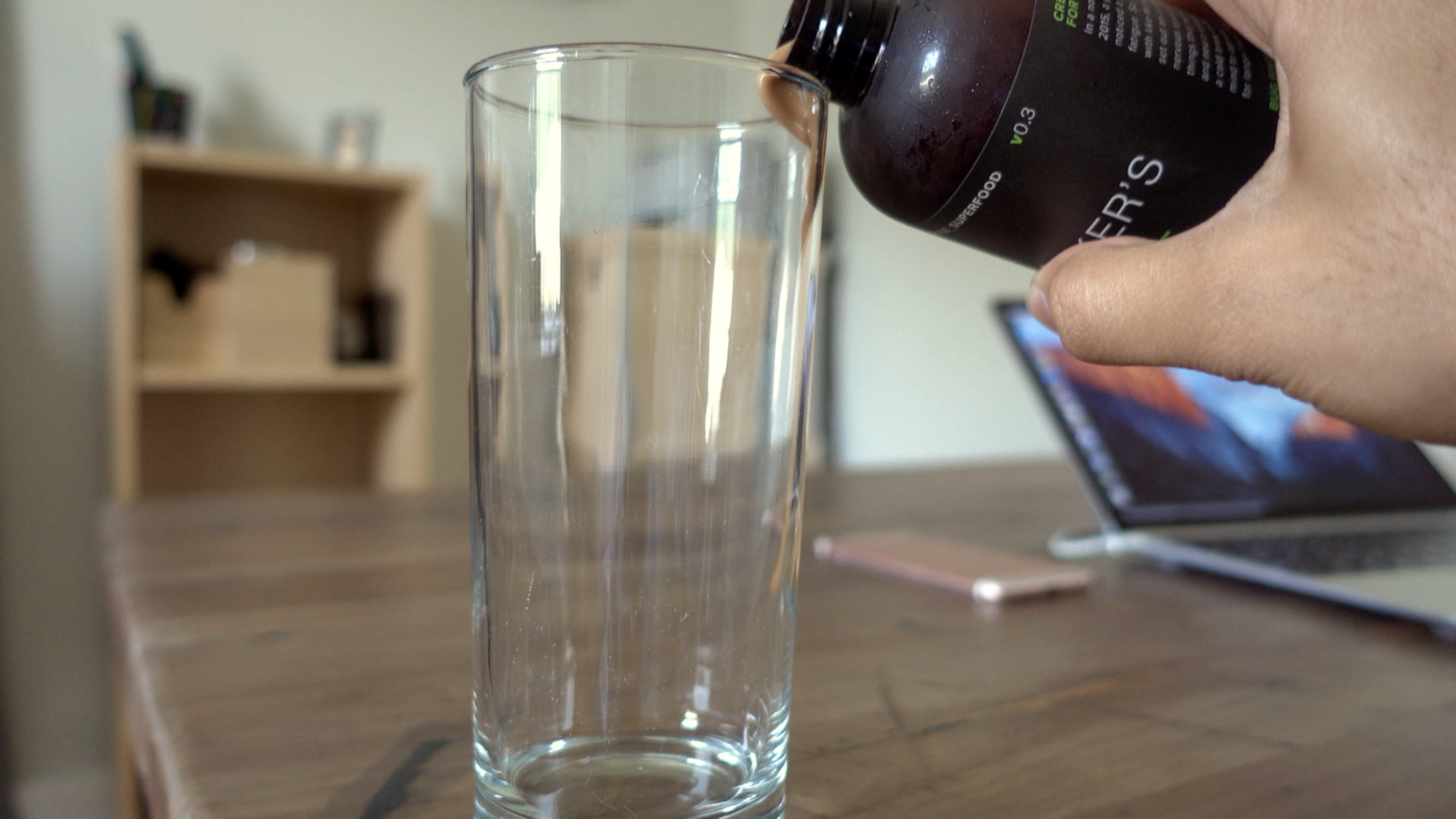 You might have noticed that the bottles of Hacker’s Brew in the photos and video feature a version number in the upper-right hand corner of the product label. That’s because the team behind the product consumes it regularly, and hence it’s incentivized to look for ways to enhance the drink and improve taste and function.

A big part of Hacker’s Brew is the science behind the project: the idea that nootropics provide real tangible benefits to the end-user. Although thoughts and opinions about nootropics widely differ, a lot of smart people have poured years of research into the nootropics and believe in the benefits.

As a layperson on the topic, it’s hard for me to comment about particulars, but I can assure you that in the case of Hacker’ Brew, it definitely works better for me than consuming espresso drinks throughout the day. One bottle was enough to keep me going for most of my work days, though six days of testing isn’t much to go by regarding the product’s long-term effects.

What may matter even more to 9to5Toys’ readers is the price of Hacker’s Brew. Like Starbucks, these drinks are not very cheap. Each bottle costs $6.50, and are sold in packs of 10 (minus priority shipping). In other words, it’ll cost you $65 + shipping to use Hacker’s Brew for two typical M-F work weeks.

For those of you who commit to the drink, Hacker’s Brew offers a monthly subscription model. The subscription provides two 10-packs (shipped separately) each month for $140 with free priority shipping. This provides you with enough product for a full month of Hacker’s Brew-infused work.

That may sound pricey on the surface, but if Hacker’s Brew is able to significantly enhance your productivity, it might help offset the cost, or even outright pay for itself. Again, your mileage and experience may vary.

If, however, you’re simply looking for a way to make a good cup of cold brew coffee, and aren’t as concerned with the cognitive enhancements, you could always try the Hario Water Brew Coffee Pot and a bag of Tiny Footprint Cold Press Elixer to make great-tasting batches of cold brew coffee at home for cheap. If the idea of cold coffee doesn’t sound pleasing to you, then check out our review of the venerable AeroPress, which makes it easy to brew single cup coffee anywhere.