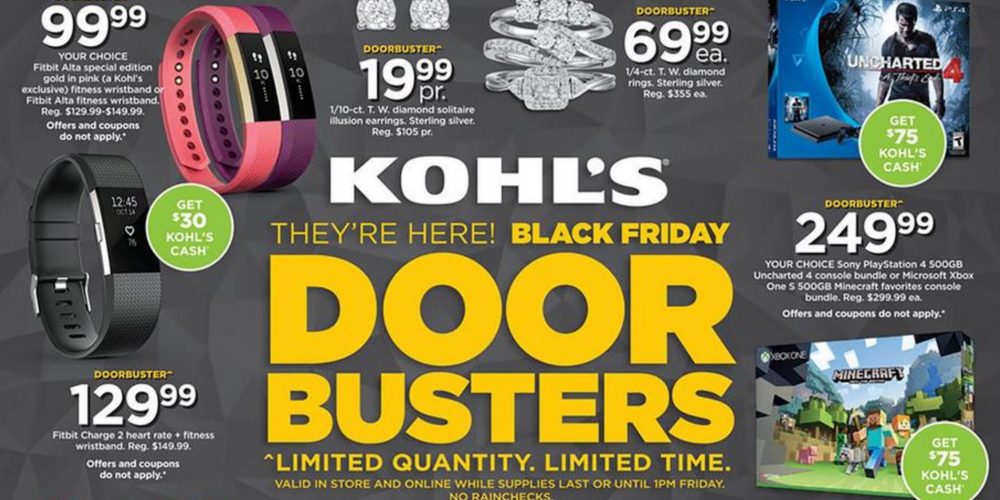 November has started off with a bang as we’ve had our first glimpse of what to expect on Black Friday 2016. Amazon has officially opened its storefront and we also got a full look at what Sam’s Club is set to offer. This morning, we’re turning our attention to Kohl’s. Shoppers will be able to cash in on Black Friday Deals online starting November 21st. Doors will open on Thanksgiving Day at 6PM, with doorbusters popping up through 1PM on Friday.

The department store chain is offering the usual variety of electronics, home goods and clothing but appears to pushing extra hard with additional Kohl’s Cash on top of already discounted prices. Head below for the best of Kohl’s this Black Friday…

As we noted above, Kohl’s will be offering a number of doorbuster deals. These are slated to start on Thursday and are only available on a while-supplies-last basis and will cease on Friday at 1PM. A 49-inch Haier 4K Ultra HDTV kicks off the value electronics at $249.99 (Reg. $350). This budget set features four HDMI inputs, dual 8W speakers but unfortunately does not have built-in streaming services. Nevertheless, this is bound to be a popular doorbuster at Kohl’s.

Early ad leaks suggest that this holiday season will be privy to $250 Xbox One and PlayStation 4 console deals with each retailer given the flexibility to sweeten the deal with add-ons. Kohl’s will be offering an extra $75 worth of Kohl’s Cash, which is a nice credit if you plan on doing any other shopping at this retailer. By comparison, Sam’s Club is throwing in a free extra controller on select consoles. Your choices at Kohl’s include a 500GB PlayStation 4 Uncharted 4 bundle or 500GB Xbox One S Console with Minecraft. Again, these will be doorbuster promotions, so it’s difficult to say how much stock can be expected at each retail location.