When sitting on a plane and ascending through the sky, the thought of what it’s like to walk on clouds may run through your mind. And to be honest, that desire is highly unlikely. But don’t let that get you down, because Nike has made it possible with its Flyknit sneakers.

About a month ago, Nike celebrated the 4 year anniversary of its very popular Flyknit sneaker. It made its debut in February of 2012, after 4 years of perfecting, as a new precisely engineered technology to mainly benefit runners and those in training. Since then, like most sneakers, it has developed to be more than a shoe for the active.

The original Nike Flyknit sneaker is probably the closest thing to walking on clouds. It fits snuggly and conforms to the shape of your feet so that you don’t even need to wear socks – thanks to the yarn, fabric, and knit upper technology. This helps facilitate air flow in the shoe and dispense of any heat that builds up. So if you’ve ever had the urge to wear only your socks, then this is your shoe! 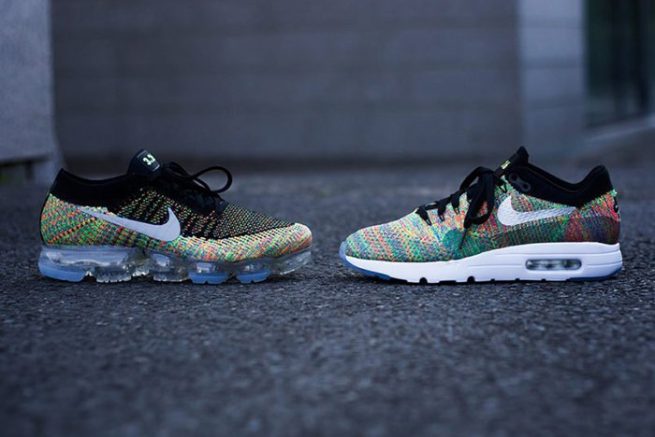 Since its origin, Nike has incorporated its Flyknit technology into almost all of its shoe designs. They’ve even created soccer and football cleats, as well as golf shoes – so it’s not just a runner and trainer’s shoe. Some of the most popular everyday adaptions are the Nike Air Max, Nike Roshe, Nike Air Force 1, and the Nike Air Presto. Each come in its own array of colors, the most popular being the “multi-color”. If you’ve ever seen a pair while out, it was most likely one of those styles. It would also be safe to say that it is now fashionably in to wear anything Flyknit.

Whether you’re looking to turn heads or just be comfortable, these sneakers are a great option. Plus, you’re able to purchase a pair through Nike iD – where you can customize them to your liking. Just like most of Nike’s sneakers, Flyknits are sold at a number of retailers. If you’re looking to snag yourself a pair you can find them at Nike, Macy’s, Amazon, Footlocker, eBay, and more. Nike Flyknits typically range from $100 to $200 depending on the exclusivity and style.

Some of our favorite lifestyle Nike Flyknits: