Amazon offers the View-Master Batman: Animated Series Virtual Reality Pack for $12.84 Prime shipped. For comparison, it has a list price of $45 but usually goes for around $20. Today’s deal is a new Amazon all-time low. Rated 4.3/5 stars.

This bundle is compatible with other View-Master Experience Packs, as well.

This custom Batman View-Master VR viewer is your portal to immersive, virtual reality entertainment and adventure, transporting you to Gotham City! The View-Master VR platform that works with Google Cardboard will bring the dynamic visual style based on the artwork of producer Bruce Timm to life. Gotham City is under attack! The Joker, the Riddler and Two-Face are carrying out devious plans to terrorize the city. Explore the Batcave in immersive VR including Batmobile, the Trophy Room, The Crime Lab, the Dock, the Gym and the Garage! Fly the legendary Batwing, go on missions and help Batman defeat the villains and save the city! Simply download and launch the View-Master Batman: The Animated Series app to your compatible smartphone (not included). Scan the QR code on the bottom of the reel to unlock content. 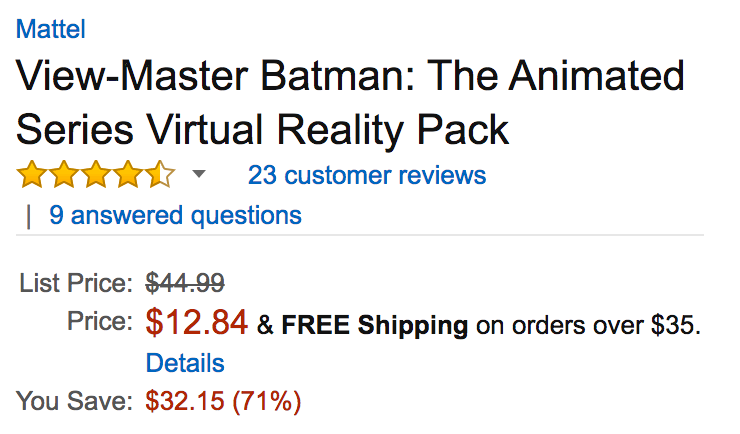 $13
You’re reading 9to5Toys — experts digging up all the latest technology and lifestyle deals, day after day. Be sure to check out our homepage for all the latest news, and follow 9to5Toys on Twitter, Facebook, and LinkedIn to stay in the loop. Don’t know where to start? Check out the best Apple deals, our daily podcast, and subscribe to our YouTube channel