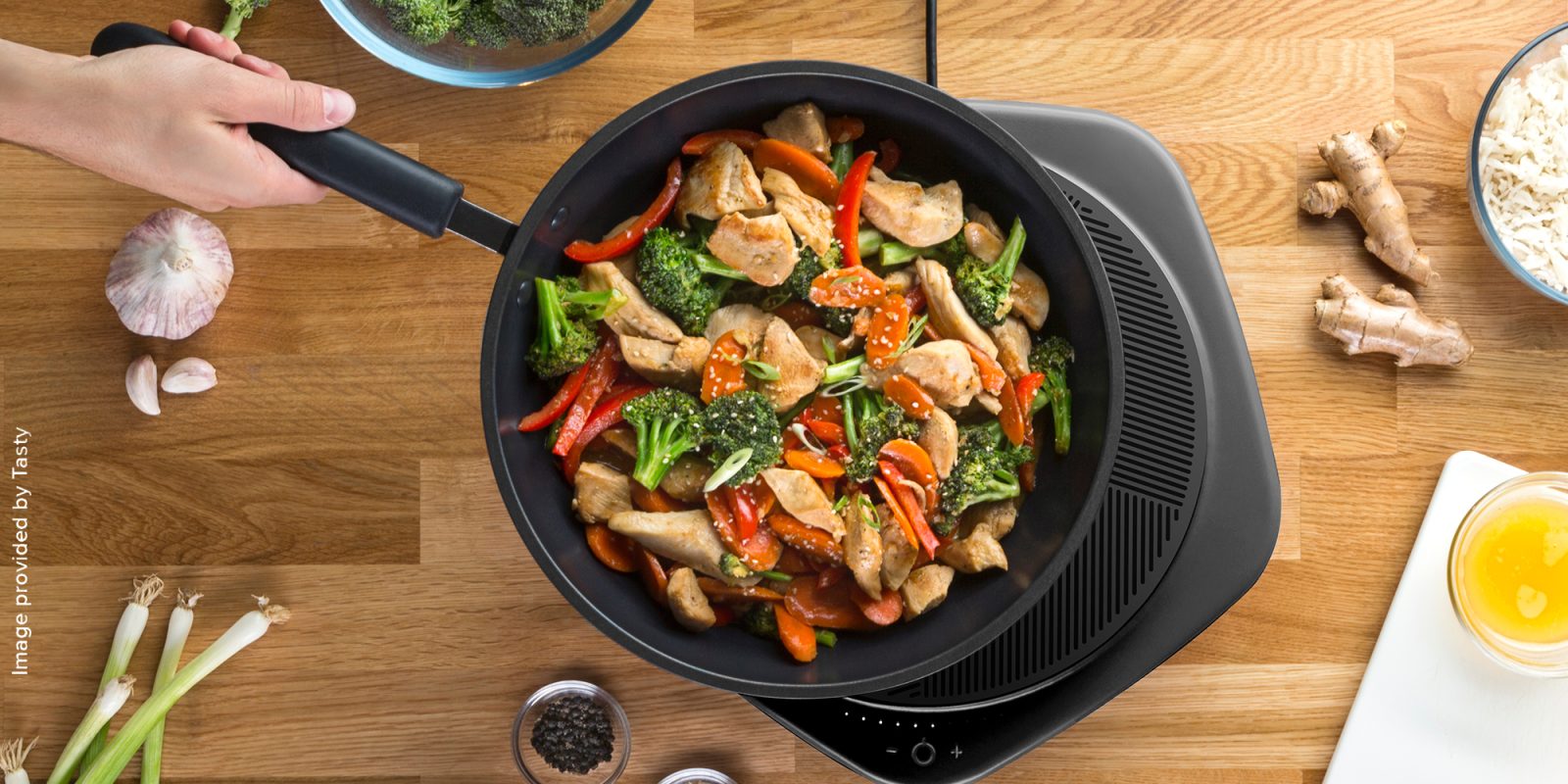 While BuzzFeed may be known for quizzes, pop-culture lists, recipe videos and more, the media company is now journeying into the smartphone accessory business with its new Tasty One Top Bluetooth-enabled cooker. While smartphone-connected cookers are nothing new, the One Top looks to mix it up by combining an expansive catalog of recipes with its ‘easy to use’ smart cooking device.

BuzzFeed launched its recipe and food spin-off site Tasty just about two years ago. And with its birthday just several days away, has announced the new smartphone-enabled cooking companion. Thanks to a partnership with GE Appliance’s First Build team, BuzzFeed Product Labs was able to create the One Top cooker, which is now available for preorder at just $149.

By combining high quality recipe videos and the viral nature of social media, Tasty has already seen great success despite its relatively young age. Continuing this trend, the One Top syncs with Tasty’s massive catalog of top-down recipe videos, so you’ll be able to effortlessly cook along with the step-by-step instructions. 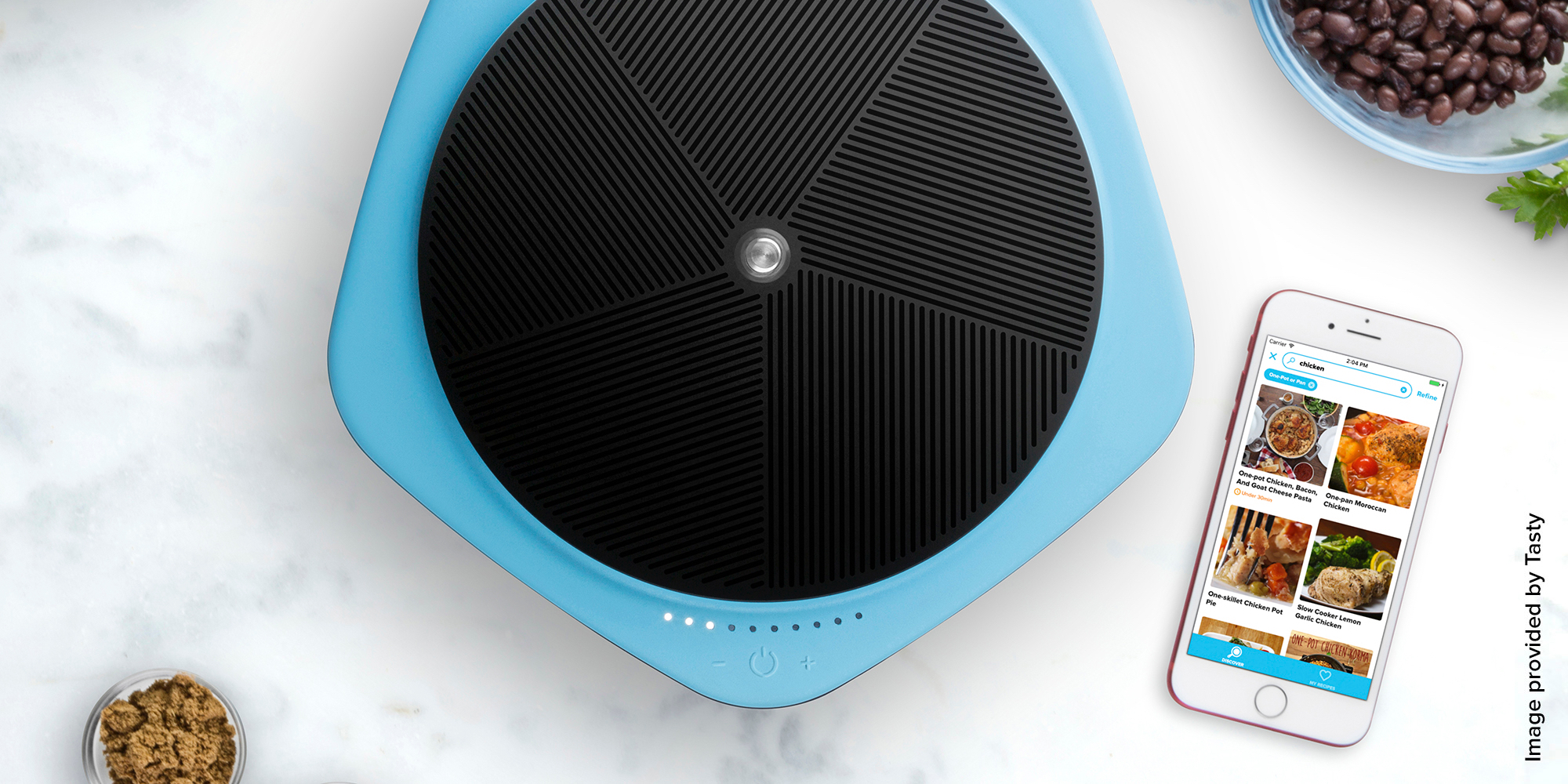 Thanks to induction cooking technology, the One Top is said to be faster, safer, and more precise in helping you recreate your favorite dishes. Speaking to that last point, the cooker tracks surface temperature of the pan or pot you’re using, as well as the internal temperature of your food. With the ability to tweak these two temperatures at will, the One Top “assures the perfect execution of every recipe.” Capable of handling a wide range of cooking tasks, it is also said to work great for pot cooking, slow cooking, sous vide, and more.

Now the cooking experience wouldn’t be complete without the Tasty One Top’s companion iOS application. While the Tasty app still allows you to catch up on over 1,700 cooking videos, it also packs extra features like recommending meals based on ingredients you have on hand and more. By syncing instructions with the One Top’s cooking settings for each recipe, you’ll be able to prepare meals from a large catalog, regardless of if you’re looking for something quick or a gourmet dish.

If you can’t wait to get your hands on Buzzfeed’s first smart appliance, preorders will run you $149 for the One Top and are said to be shipping in Novemeber. If you’re really sold on the induction cooker, there’s a cookware bundle available for $184 as well. While that may seem like a lot for what could be seen as a smart hot plate, sous vide and other precision cookers retail in a similar price range.

New York, NY — July 27, 2017 — BuzzFeed today unveiled its first-ever smart appliance, the Tasty One Top, a Bluetooth-enabled induction cooktop now available for pre-order.  The One Top will connect directly to the all-new Tasty app for iPhone, which is available on the App Store today with nearly 1,700 video recipes.

The announcement comes as BuzzFeed’s Tasty celebrates its second birthday on July 31, marking a two-year rise in which it has grown into the largest social food network in the world. Tasty now reaches 1 in 4 Facebook users worldwide and attracts 2.3 billion videos views every month, according to Tubular Labs.

“In two years, Tasty has reimagined the recipe format as a visual, shareable and interactive medium, democratizing food and making cooking more accessible, social and fun in the process,” said Ashley McCollum, General Manager of Tasty. “The Tasty One Top and app demonstrates our commitment to the intersection of content and technology, marking the beginning of the next step in the evolution of our business as we expand into new ways of using technology to bring people together around food.”

The Tasty One Top is now available for pre-order in the U.S. now for $149 at www.tastyonetop.com. Connecting directly to the Tasty app, the One Top allows fans to tap their favorite recipe and take the guesswork out of cooking.  In one small countertop package, the One Top can be utilized for almost any form of cooking, including: pan cooking, pot cooking, slow cooking, sous vide, and more.

Designed by BuzzFeed Product Labs and brought to life with the help of GE Appliance’s First Build team, the One Top tracks the surface temperature of a pan or pot, as well as the internal temperature of your food, to assure perfect execution of every recipe.  It’s induction technology is faster, safer, and more precise than traditional forms of cooking.

“Tasty’s strong brand and massive fan base give it almost limitless avenues for expansion — from cookbooks to licensing to consumer tech — and we’re excited to take a new big step with the One Top, a product that has the potential to truly make precision cooking widely accessible,” said Ben Kaufman, Head of BuzzFeed Product Labs.

The Tasty app is available now on iPhone (with Android to follow), allowing users to watch the latest videos from Tasty, and explore recipes based on any ingredients they have available in their own kitchens. Recipes can also be searched based on the time of day, social event, difficulty, speed, or dietary needs. The Tasty app offers step-by-step instructions on how to cook every single Tasty recipe, the most user-friendly expression of Tasty’s revolutionary video format yet. For users that live outside the U.S., the Tasty app also provides metric values for every recipe.

BuzzFeed Product Labs was created in October 2016 and is tasked with creating physical products and social commerce experiences, from personalized Tasty Cookbooks to new inventions like Homesick Candles, the Tasty One Top and more. Product Labs hones in on the opportunity to create commerce driven by sharing and human connections, utilizing social media to lead the shift in the commerce space.