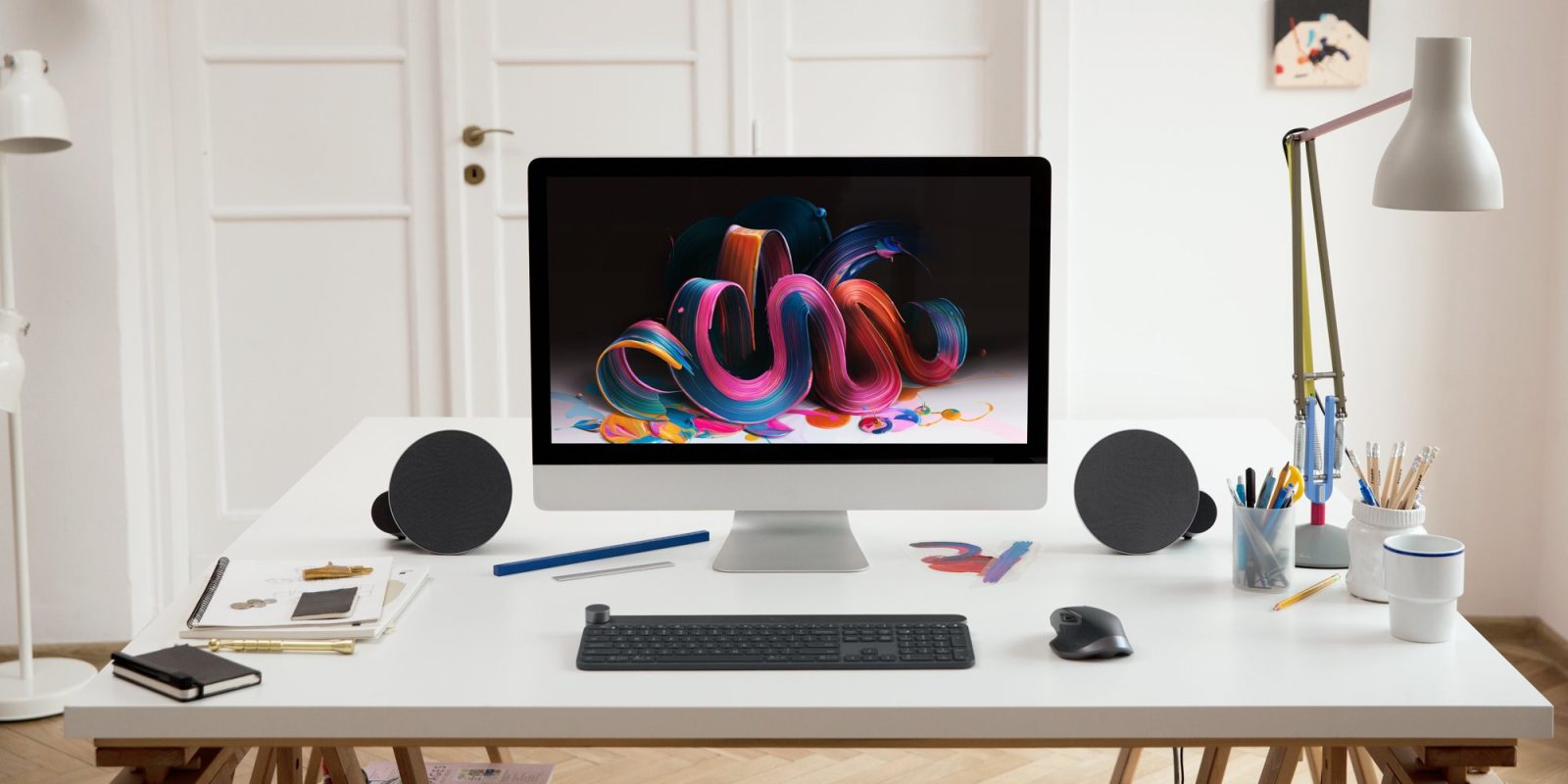 In building out a more advanced keyboard, and bringing an elegant look to desktop speakers, Logitech is looking to take over your desktop space.

The Craft and MX Sound follow along in the company’s recent push to stylistically unify their desktop products. From this outside perspective, it appears that Logitech is working to build an ecosystem that compares to Apple’s own. Aesthetically, and experience-wise, both of today’s announced items sit beautifully alongside the MX Master 2S and the Spotlight remote.

Without a doubt, the Logitech Craft’s input knob makes it stand out amongst other keyboards. The dial, dubbed ‘crown’ by Logitech, is an auxiliary input meant to help aid creatives in their workflow. It introduces customizability and extensibility to keyboards in the same way that the MX Master 2S brought to mice. By using the Logitech Options app, you can granularly manage what a turn, press, or press and turn of the crown controls. The real power in the crown comes from within the Craft’s integrations with third party apps.

The Craft’s creative input dial looks like a shrunken down version of Microsoft’s Surface Dial. It may not interface with a large touchscreen display, but it does bring similar deep integrations with third party apps. At launch, the Craft keyboard will have custom profiles for a suite of the Adobe Creative Cloud apps. Logitech says these include Photoshop CC, Illustrator CC, Premiere Pro CC, and InDesign CC. Alongside that, Microsoft Office’sWord, Excel, and PowerPoint will have integrations too. I asked Arnaud Perret-Gentil, Product Manager at Logitech, why they decided to start with these suites of applications first. He explained that through customer interactions, Logitech learned that these were the applications that would most benefit from an input device like the crown.

At first, I assumed the crown would be limited to one function per application. Perret-Gentil demonstrated to me just how powerful and far-reaching these tools can get. In using Photoshop CC as an example, he selected the brush tool and showed all that he could control from the crown. With a light tap and turn on the crown, he could adjust brush size, hardness, opacity, and flow. All of this without lifting a finger from his mouse or keyboard. No keyboard shortcuts necessary, the crown already had a multitude of functions built in for each primary tool in Photoshop. He explained that the crown experience was a subtle tool that one quickly became accustomed to.

I consider myself a keyboard shortcut fiend, but the crown goes beyond that. It adds another input method to the area you’re already comfortable with. The experience is similar to the first time in configuring an MX Master mouse to your liking. It is just a few extra buttons on a mouse, but those few extra buttons can dramatically change your workflow. The Craft keyboard brings that same experience.

Not all apps will have deep integrations like Photoshop CC has, some will require application developers to build out the code to support the crown. Perret-Gentil let me know that an SDK will be available in the future for interested parties.

For those that want some customizability today, the Logitech Options app offers some additional controls for the Craft. For the Photos app on the Mac, I configured the crown’s turning to move through my pictures and its press action to jump into editing mode. With the taste of that light functionality, I immediately wished I could do more.

The Craft’s input dial is what I imagined the MacBook Pro’s Touch Bar could be but never was. The Craft brings a tactile feel, while the Touch Bar lacks it. With the Craft, I never have to look away from my screen to know what I’m controlling, and just how granular each adjustment is. Of course, the Touch Bar’s advantage here is its widespread adoption. Here’s to hoping that the SDK will be widely adopted by other third-party app companies.

After a week of usage with the Logitech Craft keyboard, I only had two complaints. The first relates to the keypress experience. While the keys feel great under my fingers, the key switches produce audible squeaks while typing. It sounds the Tin Man moving about my desk. The second complaint is admittedly silly: I wish all apps had deep integrations with the crown already. As an avid Sketch and Pixelmator user, I found myself reaching for the crown frequently without even thinking that it wasn’t yet supported.

Some other favorites from the keyboard testing include the USB Type-C charging and the backlit keys. According to Logitech, the built-in battery lasts about a week, not long at all, but keeping it charged hasn’t been an annoyance for me. The keys’ backlighting automatically turns on once your fingers hover over them and they’ll adjust to the ambient lighting.

Alongside testing the Craft keyboard for the past week, I’ve also been using the MX Sound as my main desktop speakers. The circular design with rear tubes brings both an alien and comfortable look on my desk, especially alongside the Craft keyboard.

Something that surprised me about the MX Sound was just how clear all the sound I tested on it was. It was so good that it actually created a strange experience in testing. When I would crank the volume to the max, I’d expect distortion, but there never was any. That ended up tricking my ears into thinking that the speakers never really got that loud. Not until I walked out of my office space did I realize that they were filling my apartment with bright sound.

Onboard the MX Sound sports two 3.5 mm inputs, and one headphone jack. It also allows for dual Bluetooth 4.1 device pairings. Keeping up with the clean design of the device is the motion activated, back-lit controls. Their subtlety only further adds to the aesthetics of the speakers.

From watching YouTube reviews, to movies, and listening to music, the MX Sound performed beautifully. At $99 it’s a no-brainer desktop speaker setup.

The Craft keyboard and MX Sound will be available in October of this year for $199.99 and $99.99, respectively, at Logitech.com.