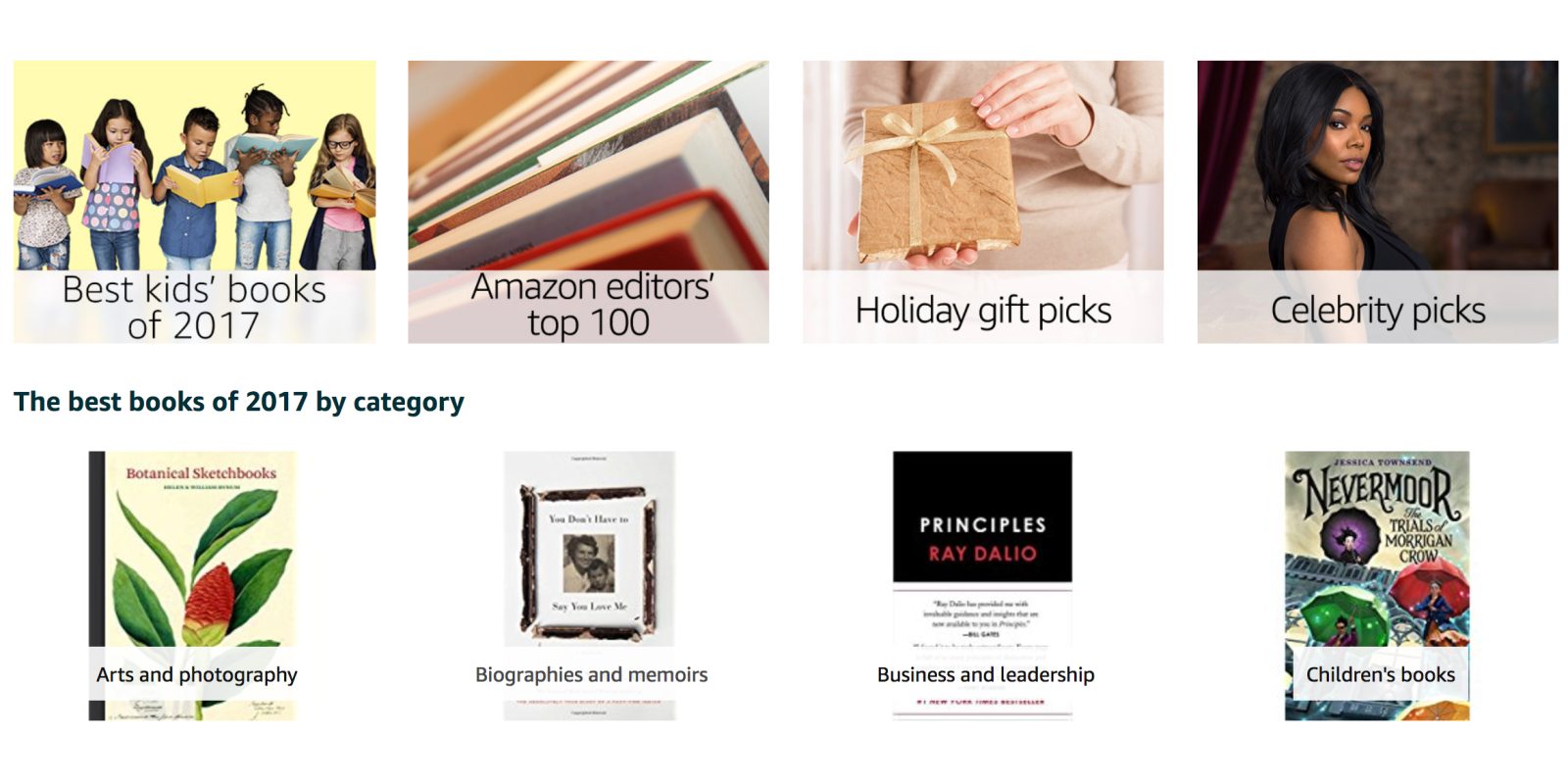 As it does each year, Amazon has officially unveiled its Best Books of 2017 list. This is a great way to come up with stocking stuffer and gift ideas for the bookworm in your life. Or, simply some entertainment for your holiday downtime this year. You’ll find Amazon’s top-picks below.

Along with the top books of the year, you’ll find dedicated lists for a wide-range of categories. That includes comic books, fiction, humor and many more. You can see each of these curated selections right here.

Have you caught up on our Black Friday 2017 coverage? Find all of the latest ad leaks, deals and more right here in our dedicated guide.

Amazon Announces the Best Books of 2017, Naming David Grann’s Killers of the Flower Moon: The Osage Murders and the Birth of the FBI the #1 Book of the Year

SEATTLE–(BUSINESS WIRE)–Nov. 8, 2017– (NASDAQ:AMZN)—Today, Amazon.com announced its selections for the Best Books of 2017, naming David Grann’s nonfiction Killers of the Flower Moon: The Osage Murders and the Birth of the FBI the Best Book of the Year. Just in time for the holidays, the annual list features the Top 100 books of the year plus Top 20 lists across various categories ranging from literary fiction and mystery to children’s and young adult. All lists are hand-selected by Amazon’s team of editors – who read hundreds of thousands of pages throughout the year – first by choosing the best books of every month and then, finally, the best books of the year. To see the full list of the Best Books of 2017 and buy the print or Kindle editions, visit: https://amazon.com/bestbooks2017

“In a year when there were many strong contenders for Best of the Year, David Grann’s book offered readers something exceptional,” said Sarah Harrison Smith, Editorial Director of Books and Kindle at Amazon.com. “Killers of the Flower Moon tells the largely unknown true story of big oil and serial murder in Osage County, Oklahoma, in the 1920s. It’s meticulously researched and shines an important light on what is at once an unsurprising and yet unbelievable chapter in American history.”

Here are the Amazon Editorial Team’s Top 10 picks this year:

1. Killers of the Flower Moon: The Osage Murders and the Birth of the FBI by David Grann: Grann’s account of a 1920s investigation into the murders of oil-rich members of the Osage Nation in Oklahoma has the grim excitement of film noir, the heady intellectual pleasure of well-told history and writing worthy of The New Yorker, where Grann is on staff. Though Killers of the Flower Moon is set in the past, the bigotry, greed and corruption Grann exposes feel relevant to our times. Grann’s previous books include The Lost City of Z: A Tale of Deadly Obsession in the Amazon.

2. Little Fires Everywhere: A Novel by Celeste Ng: In this tightly woven, emotionally fraught novel set in a picture-perfect suburb of Cleveland, Ng addresses timely issues of motherhood, privilege and race. Ng’s debut novel, Everything I Never Told You, was Amazon’s Best of the Year choice for 2014; her new book continues her compelling exploration of the tension between established social order and cultural change.

3. Beartown: A Novel by Fredrik Backman: Backman explores community, loyalty and its limits in this eminently readable, compassionate novel set in a small town that comes together over ice hockey and then comes apart over allegations of sexual violence. Backman’s previous books include A Man Called Ove.

4. Exit West: A Novel by Mohsin Hamid: In this fable-like tale, in which two lovers flee their war-ravaged homeland to seek refuge abroad, Hamid upends our cultural assumptions and stakes an optimistic claim for the enduring pleasures of imagination and narrative, even in the midst of war. Hamid’s previous books include The Reluctant Fundamentalist.

7. The Heart’s Invisible Furies: A Novel by John Boyne: In this sweeping and magnetic novel set in post-war Ireland, Boyne dexterously expands the story of one man’s life into a portrait of a culture in transition. Boyne’s previous books include The Boy in the Striped Pajamas.

8. You Don’t Have to Say You Love Me: A Memoir by Sherman Alexie: In Alexie’s extraordinary memoir of his whip-smart, sometimes cruel mother, he connects her turbulent life to the widespread American Indian experience of violence and oppression. Alexie’s previous books include The Absolutely True Diary of a Part-Time Indian.

9. Sourdough: A Novel by Robin Sloan: Sloan’s delightful novel about a software engineer who finds her true calling when she is bequeathed a sourdough starter with magical properties has an inspiring message about the importance of finding work you love. Sloan’s previous books include Mr. Penumbra’s 24-Hour Bookstore: A Novel.

10. The Dry: A Novel by Jane Harper: In her gripping debut novel, the only mystery among this year’s top 10, Harper masterfully evokes the atmosphere of a drought-stricken farm town where lies told in the past may be linked to the violent deaths of a young local family.

Here are some interesting facts about this year’s Best Books of the Year list:

The top picks in Children’s books are:

This year five debut authors top the category lists, including Jessica Townsend with Nevermoor (Children’s Books), Ray Dalio with Principles: Life and Work (Business and Leadership), Jane Harper with The Dry (Mysteries and Thrillers), Katherine Arden with The Bear and the Nightingale(Science Fiction and Fantasy) and Katie Green with Lighter Than My Shadow (Comics and Graphic Novels).