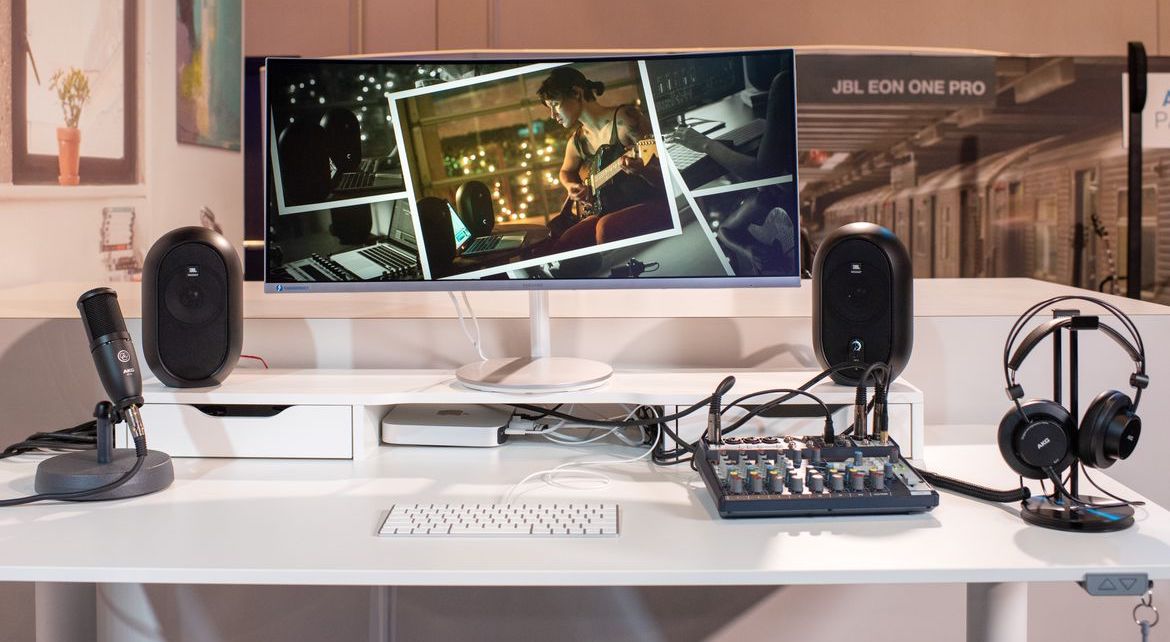 Well known audio company JBL is introducing its new One Series 104 reference monitors. Some two weeks ahead of NAMM 2019, all of the major companies are coming out of the woodwork with the latest and greatest technology in audio recording. Set for release in the first quarter of this year, head below for everything you need to know about the new multi-discipline JBL desktop speakers.

JBL is drawing upon its over seven decades of experience in audio to provide content creators of all types a versatile and great-sounding speaker. According to the company, the monitors are designed specifically for recording musicians/producers, podcasters, and video makers of “all levels.” All things considered, affordable new speakers bring together a good mix of professional features and specs with a level of accessibility most beginners and casual users will appreciate.

You’re looking at integrated 60-watt Class D amplification (30 watts per speaker) in a new coaxial driver design. The 0.75-inch high-frequency driver is aligned with a 4.5-inch low-end woofer cone that can reproduce frequencies as low as 60Hz. While I would have liked to see these things get down even lower than that, in most cases that’s more than enough to get the job done, and your neighbors will thank you.

JBL claims that the off-axis response allows for a wider sweet spot so you don’t have to be sitting directly in front at a 90-degree angle to get an accurate stereo spectrum. While that remains to be seen (well, heard), it is certainly encouraging.

You’ll find three sets of inputs here to accommodate just about any level of user. That includes dual 1/4-inch balanced options along with a single 1/8-inch unbalanced TRS input for those that might require it.

The new One Series 104 speakers also feature some of the more convenient features you might find on beginner speakers without sacrificing overall quality, according to JBL. Those include a front-mounted volume control and a front-panel headphone jack with speaker muting function. And while I’m never a big fan of those speakers where one of them houses all the goodies and then connects to the other, it certainly helps to minimize desktop clutter.

In this case, JBL is offering the master speaker and the extension as a single pair, which also helps the price. In many cases, professional studio monitors are sold as single units and can be significantly more expensive because of it. JBL said the new One Series 104 speakers will be available in Q1 2019 for £149 (roughly $200 USD).