Teenage Engineering 400 Pocket Operator Review: Is the poor man’s modular synth worth it? 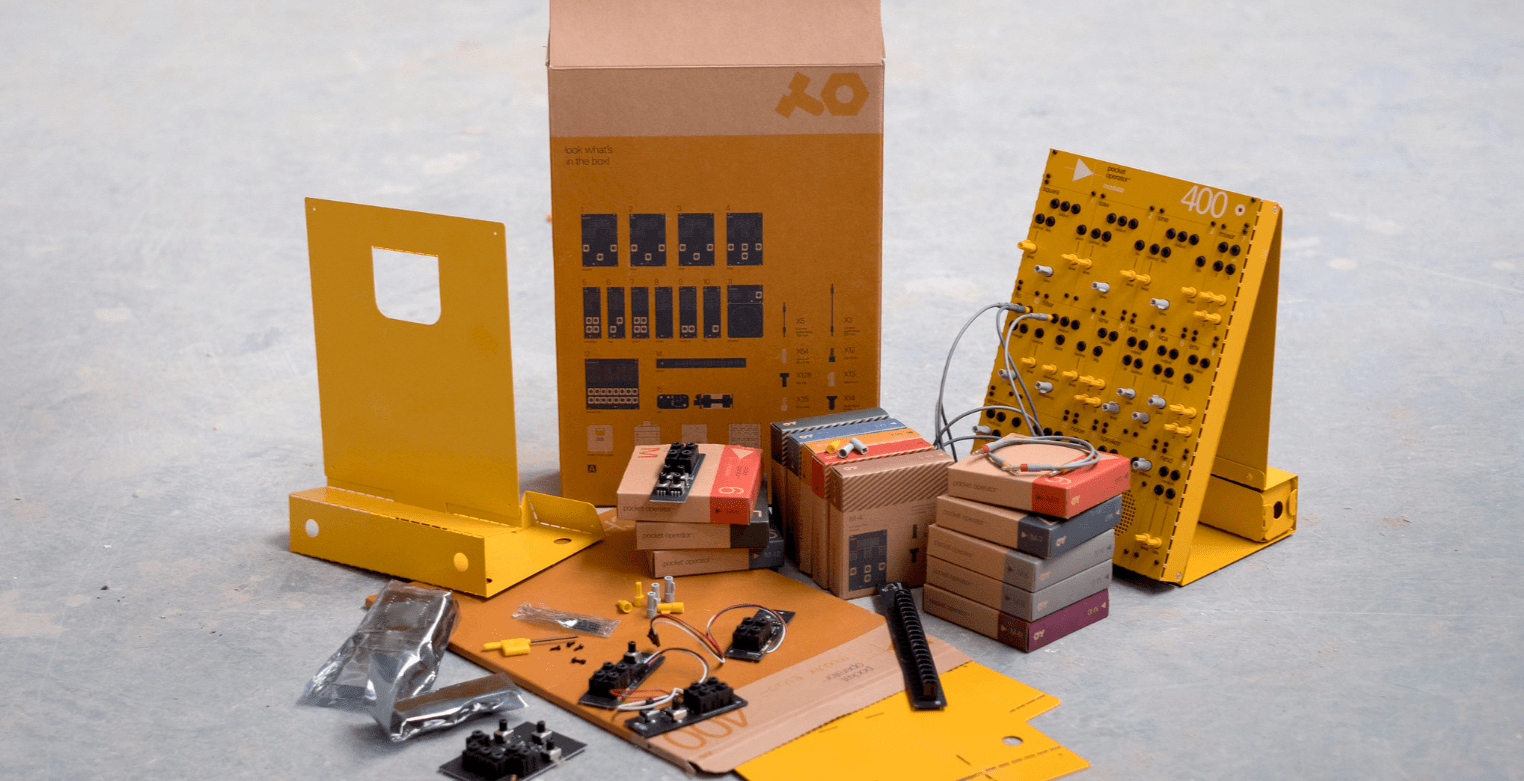 Today we are diving in to our Teenage Engineering 400 Pocket Operator review. The boutique audio device maker has created some of the most unique little instruments (among other things) over the years and we couldn’t wait to get hands on with its latest. While stock of the Eurorack compatible synthesizer is still extremely tight, we managed to get and early run to experience TE’s new build-it-yourself Pocket Operator 400 synthesizer set. Head below the jump for our hands-on impressions of the building process and sound quality of the new IKEA meets modular synthesizer kit.

The Teenage Engineering 400 Pocket Operator is a build-it-yourself affair. It is basically three metal pieces with a series of pre-made sound/control modules that make up each of the elements of the synthesizer. You can think of it like your typical IKEA DIY set except with even smaller screws and a power supply. It features 3 oscillators, a noise module, random generators, a pair of envelopes, 2 VCAs, an LFO, filter, built-in speaker and a 16-step sequencer. It also includes a power supply (batteries not included, more details below) and fifteen 3.5mm patch cables.

The tag line here is “think twice, bend once”. Upon opening the kit you’re greeted with what are essentially three main pieces of sheet metal that are pre-labelled and boxed kits for each of the modules you’re about to install (LFO, Filter, Oscillators, Power Supply, etc). You’ll have to closely follow the instructions in order to bend the sheet metal in the right way in order to create the chassis of the instrument. Everything worked well here, but this is clearly very thin and pliable metal. You DO NOT want to bend it the wrong way. While I managed to get through the process, I can easily see how the perforated areas of the sheet metal would more than likely snap off if you need to bend it back the correct way after making the wrong decision. In fact, some of the yellow paint finish began to peel off on the edges of the bends even after doing it correctly in the proper direction once.

I should quickly mention here that I’m not exactly the most fluent DIYer out there, so most customers will likely be better at the building part of this than I am. Although this is certainly not my first synth/modular project ever.

After bending the chassis into place, it’s simply a matter of installing a series of small plastic posts and a bunch of screws for each of the modules. Everything is extremely well-labeled with each of the modules clearly marked so you know exactly where to install them on the front panel. During my time on the Teenage Engineering 400 Pocket Operator review I did bump in to a problem with the power supply module. You have to snip the plastic posts in half in order to install it properly. I had a very hard time cutting the posts evenly whether it was with a pair of scissors or heavy duty snips. While it wasn’t all that much of a problem, I did have a ton of trouble getting the screws to take on the post halves that were on the small side of things.

The included screws, plastic posts and Allen wrench are apparently all you’ll need to get the job done. But that wasn’t the case for me. First, my hand was in serious pain using the tiny Allen wrench especially when driving the flat screws into the pre-drilled metal chassis holes. You have to install screws on the front and backside for each module, and a solid pair of pliers was the only way I could figure out how to get this done properly. 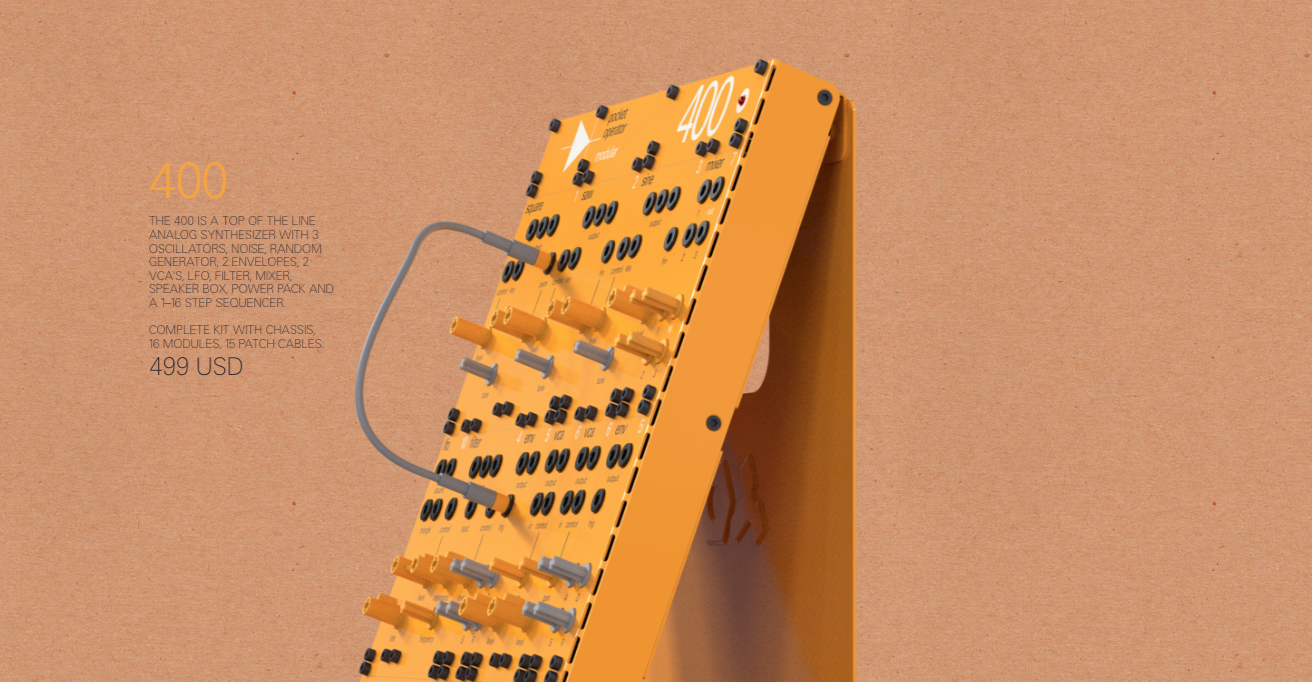 Once all of the modules are installed, all you have to do is pop a few more screws in to fix the front panel to the angular, easel-like backing. Again, I had some minor issues at this step, despite finally getting everything in place. It was very difficult to drive the tiny screws through both the front panel and the not so durable metal tabs hanging from the back chassis. The metal tabs are barely strong enough to handle the screws even after pre-drilling them. I would suggest phoning a friend or using a small vice grip for this part.

You’ll also have to pop on the yellow and grey knobs for each module along the front panel. This was particularly tedious for me, but after the struggles on the bend once think seven times sheet metal, I was up for the task. Again, others might have some interesting tricks for this, but I found I needed to have the instrument on and running before I was able to actually be sure I was placing the knobs in the correct orientation.

When it comes to the power supply, you can opt for 8 AA batteries or a very particular AC/DC adapter. You’ll need a 12V (Min. 1A) 12-Watt center negative adapter with a 4.75 by 1.7mm jack. I eventually tracked something down that met those requirements, but nothing I had laying around the house/studio was compatible. So just something to keep in mind. No batteries are included here. 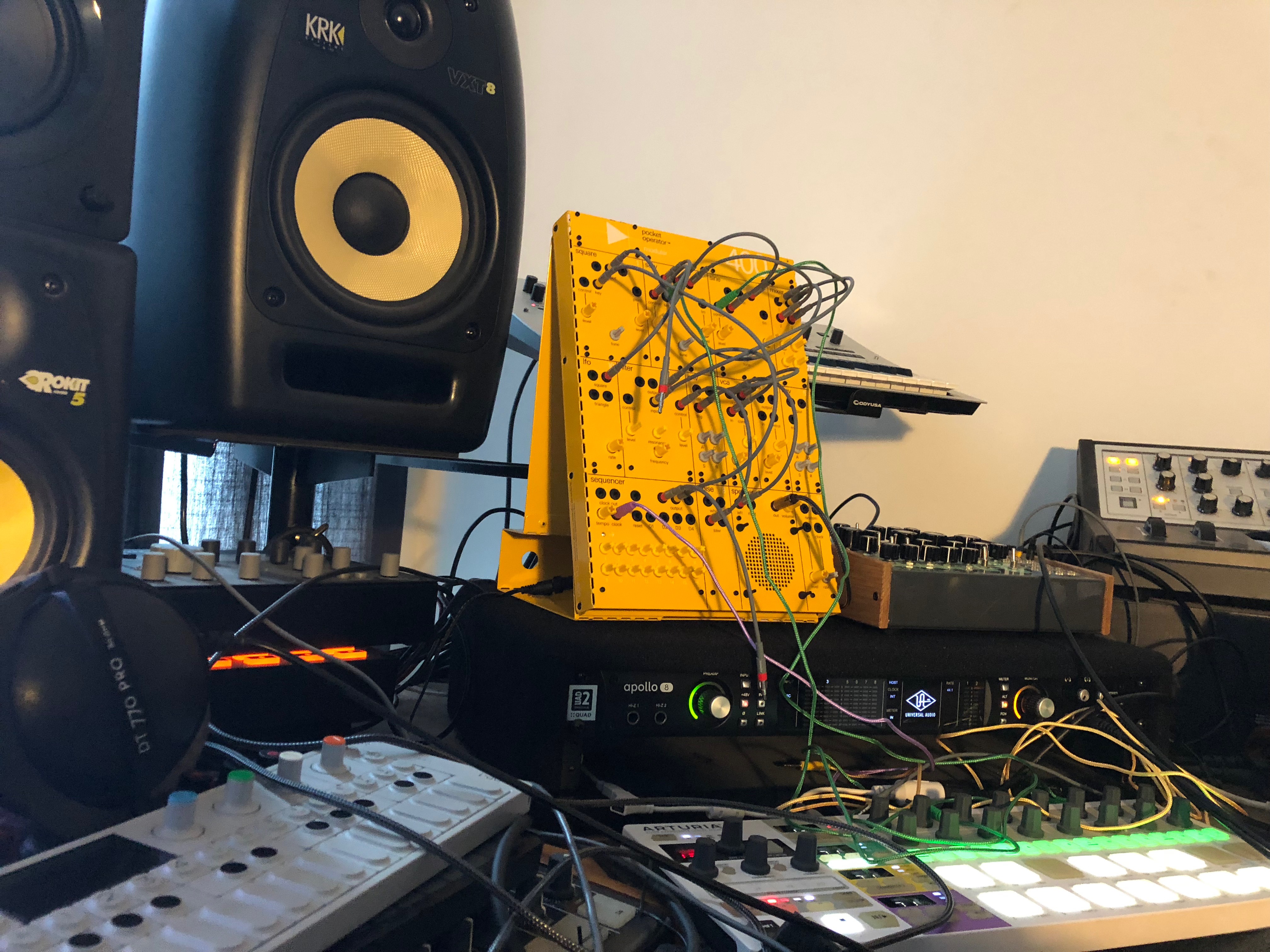 And finally…it’s time to make some sound. These oscillators aren’t going to be blowing anyone away here, but they do sound good. The filter was a little bit underwhelming for me, but I think you’ll need to temper your expectations overall if you’re used to higher end hardware. The all-in-one nature of the kit had me a little bit worried the modular experience would get boxed-in to some capacity. But after making my way through our Teenage Engineering 400 Pocket Operator review, I can safely say that is not the case. Plug anything into anything and let the madness ensue. With minutes of patching my first few sounds it became immediately clear this is indeed one of the best “poor man’s modular synths” out there, as Teenage Engineering puts it.

It is also one of the better modular setups for beginners just getting in to the world of custom built synthesizer gear. The front panel is very clearly labeled and the gorgeous instruction manual includes a few cool patches to get you started. I do however, think it could have befitted from a little bit more of a substantial backing. When pulling the cables in and out of the front panel, you will need to provide a little bit of leverage with your spare hand or the whole thing might just topple over on you. That can be mildly annoying when you want to patch something while performing on some of the controls with your other hand.

While we are talking about the front panel controls, some of the knobs on my build have significantly more friction than others. While it’s true that some of these issues are due to my shoddy building skills, it’s probably something to keep in mind when installing the modules. 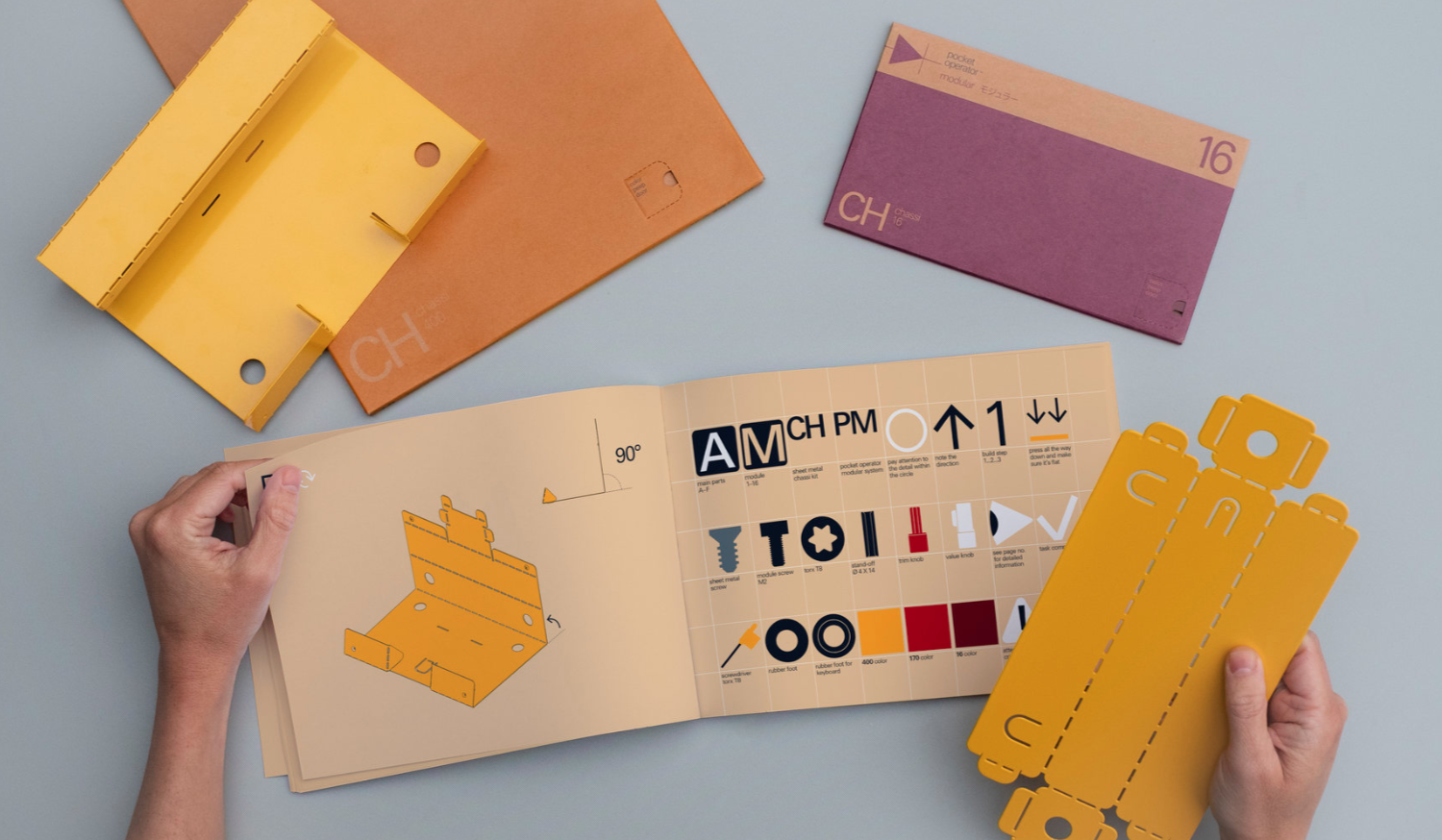 While I did bump in to some issues during the building process, I actually did enjoy myself quite a lot in the end. And again, I’m not overly proficient when it comes to DIY gigs, so more likely than not, most customers will find the process to be even easier than I did. There’s a part of me that thinks the metal chassis could have been a bit more durable without compromising the intelligent build-it-yourself design. But again, there’s also a part of me that would have paid slightly more to have it come assembled, so I might not be the best judge on that particular aspect.

While my expectations were low to begin with when it came to the actual sound quality of the Teenage Engineering 400 Pocket Operator, I am quite pleasantly surprised with the audio here. The machine is incredibly playable and I found myself lost in the cables for hours when I first got it running and plugged in. The look, boutique sound and general Eurorack compatibility in conjunction with its $400 price point make it easy to imagine me adding it to my permanent setup.