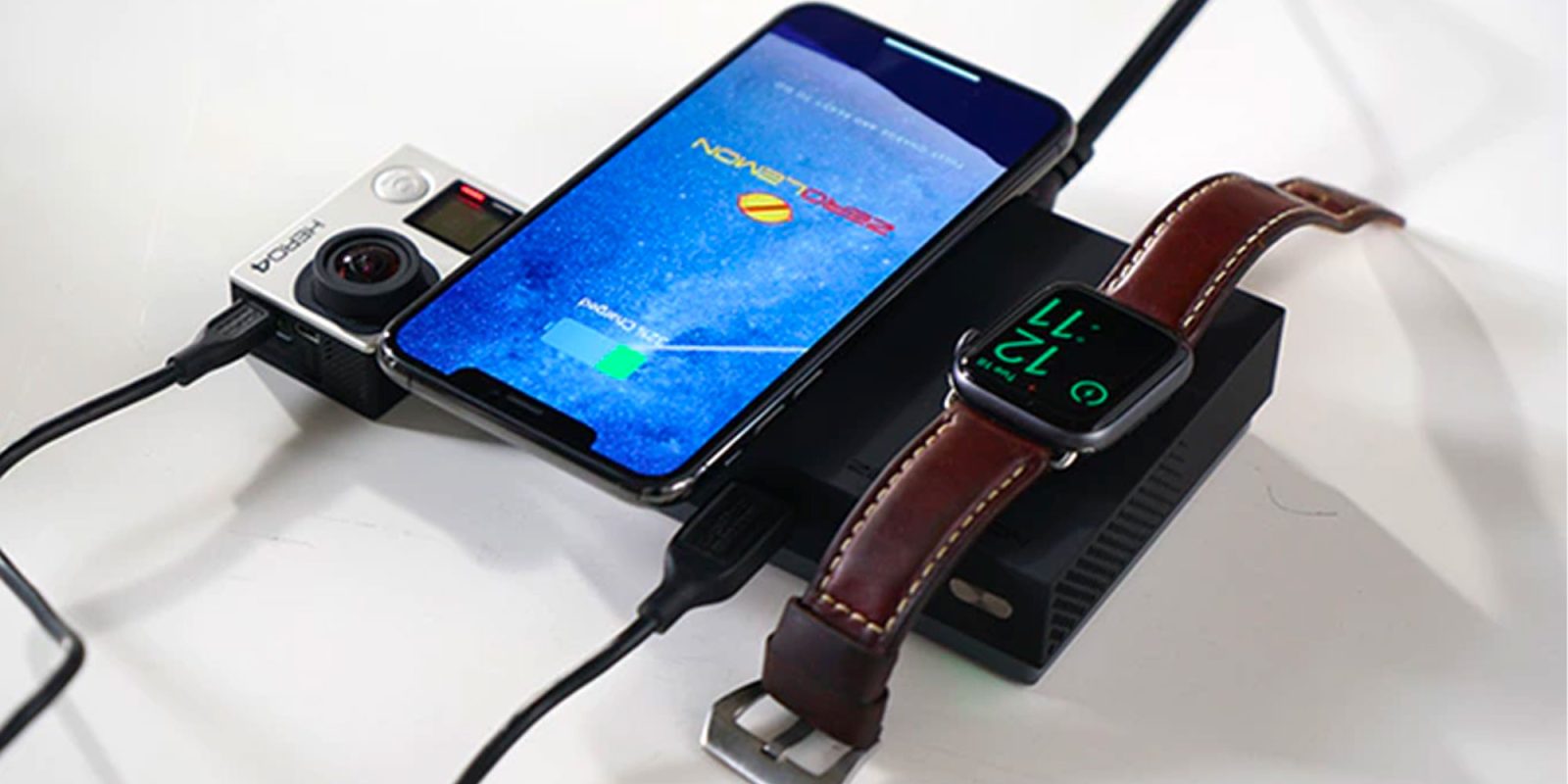 If you have to charge multiple devices at one time, you know how much of a hassle it can be. Finding your MacBook and iPad charger, Lightning cable, and Apple Watch magnetic dock can be a pain at times. Though some manufacturers have tried to help with this, like Nomad or Anker, there’s still not a great all-in-one solution. That is until ZeroLemon’s Extreme Charge Station was announced. Packing 135W of total power delivery, it sports two USB-C ports, an Apple Watch dock, 10W Qi pad, and more.

Something I hate about traveling is chargers and cables. I’ve got to remember an Apple Watch adapter, Lightning cable, 87W USB-C adapter with cable for my MacBook, and another USB-C charger for my iPad. Though I’ve got some universal chargers, like RAVPower’s 60W 5-Port USB Desktop Charging Station that sports a 45W USB-C output, it’s still not the all-in-one solution I’d like. I still have to carry a ton of extra cables, and it all just gets tangled in my bag. This is where ZeroLemon’s Extreme Charge Station sets itself apart.

The Extreme Charge Station includes two USB-C outputs, one being 87W, one 20W. This is enough to charge your 15-inch MacBook Pro and 2018 iPad Pro at the same time. On the top of this power station, you’ll find a 10W Qi wireless charger designed perfectly to place your iPhone. Next to that? A built-in magnetic charger for your Apple Watch; no cable required. That’s right. This single box powers your MacBook, iPad, iPhone, and Apple Watch; just bring two USB-C cables and you’re ready to go. The features don’t stop there, however. There are also two USB-A ports with up to 15W of power each to charge other devices you might have, like AirPods or anything else. The Qi pad is not just 10W either, since that’s the standard for Samsung devices. ZeroLemon went the extra mile and also made it a 7.5W charger, enabling fast charging on iPhone too. 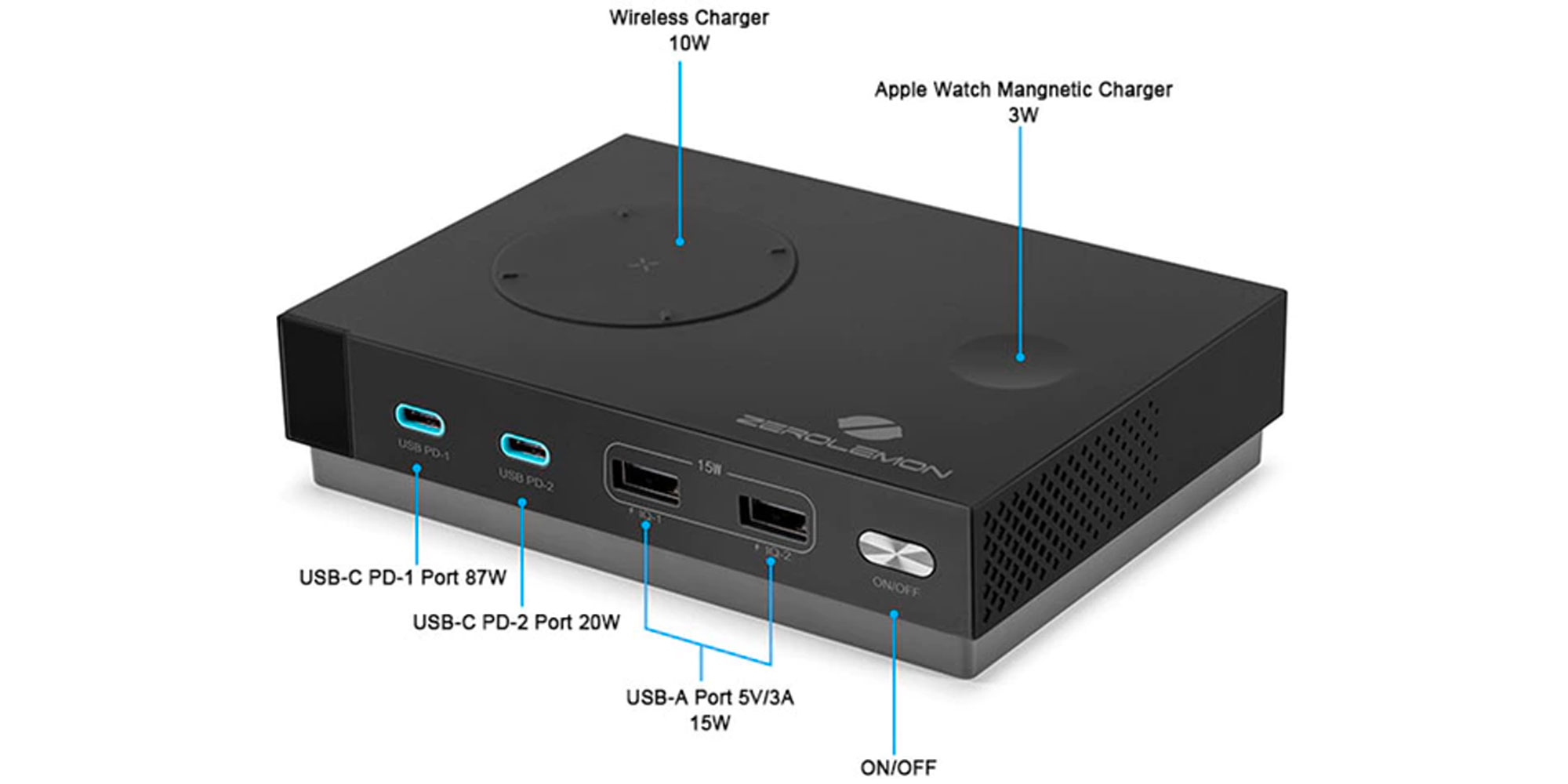 AirPower? Is that you?

Seriously. This charging station makes me think of Apple’s failed AirPower desire. Though with AirPower you could theoretically set your Apple Watch on any of the three charging areas, the ZeroLemon Extreme Charge Station is limited to a dedicated slot. But, I’d rather have this “limitation” than no product at all. Really, this charging dock does far more than AirPower could have dreamed of, and it’s a real, working product.

ZeroLemon has decided to release its Extreme Charge Station on Kickstarter with prices starting at $59, with the MSRP listing at $99. Even for $99, this charging station is likely the best solution for charging all of your tech through a single wall plug. Delivery is estimated to take place in October of 2019. ZeroLemon is a well-known brand at Amazon, and we can’t wait to see the discounts hit for its latest Charge Station after its full release.