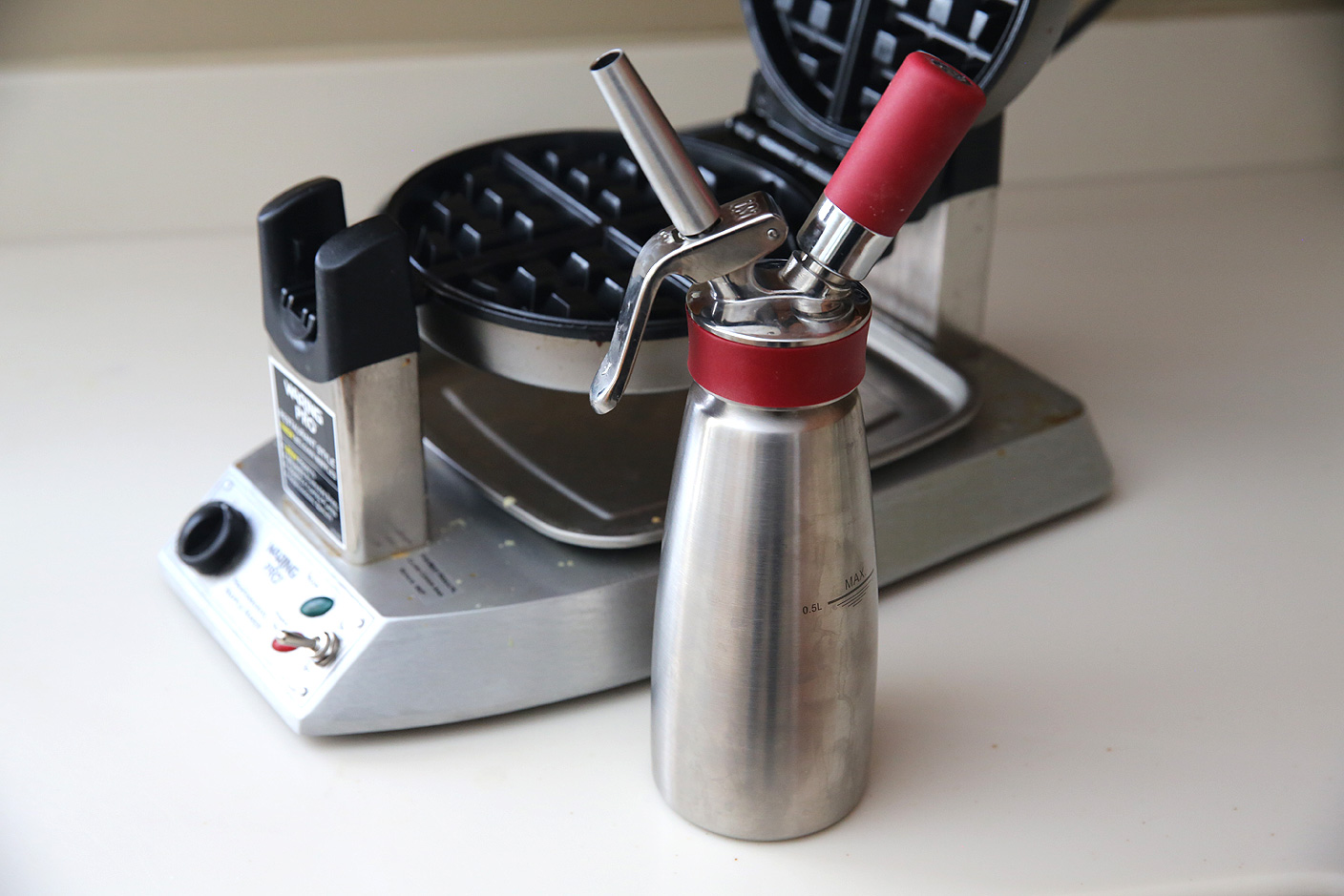 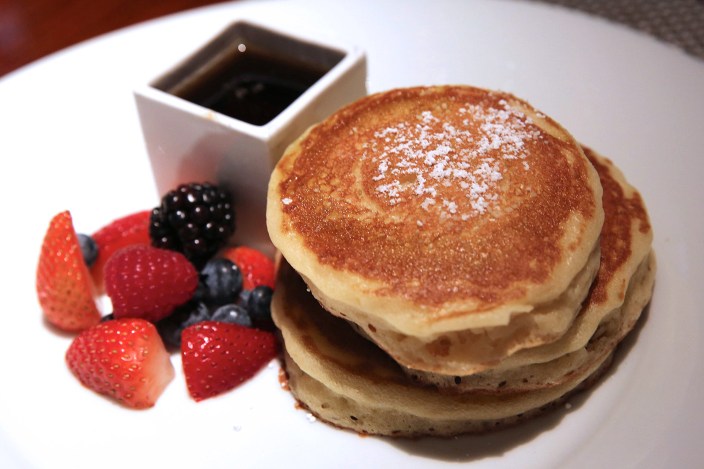 Back in my January Kitchen Tech column on bar tools, I briefly mentioned that certain restaurants are using liquid nitrogen to make frozen cocktails that resemble sorbets — a magic trick that for all intents and purposes is impossible to replicate at home. But when nitrogen comes together with oxygen to form nitrous oxide (N2O), the result is a gas with unique powers. Nitrous oxide can supercharge engines, work as a “laughing gas” anesthetic, and… create whipped cream, ultra-fluffy pancakes like the ones shown above, and super-crispy waffles. You can probably guess which of these applications I’m exploring in today’s Kitchen Tech.

The iSi Gourmet Whip Plus has made guest appearances in two prior Kitchen Tech columns: column 3 on pro-caliber modernist cookbooks, and last week’s column on carbonating tools. It is the only modern kitchen tool Ferran Adrià recommends to home cooks in The Family Meal, and made the top 5 tools recommended by Nathan Myhrvold’s Modernist Cuisine at Home (alongside sous vide water baths and pressure cookers, which Kitchen Tech has already covered).

Why hasn’t it received its own column before now? Because it typically needs to be used with something else in order to make a special product. So for this week’s Kitchen Tech, I’m going to show you how to make the lightest, crispiest waffles you’ve ever had by combining an iSi Whip with a Belgian Waffle Maker. Read on for all the details… 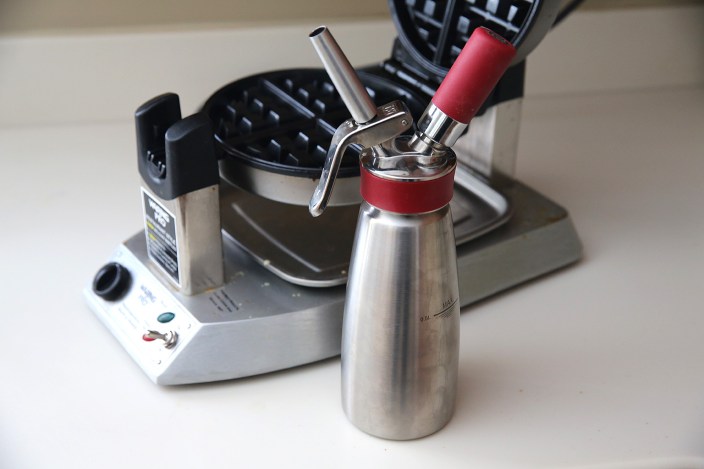 What Is An iSI Gourmet Whip?

An iSi Gourmet Whip is a pressurized container that injects nitrous oxide gas into thick liquids, turning them into foams. The container is made out of stainless steel, seals closed with a rubber gasket, and uses individual nitrous oxide chargers to inject 8 grams of N2O at a time. One charger is enough to aerate a one-pint Whip (shown above); two chargers are typically used to aerate a one-quart Whip. Each Whip comes with special interchangeable tips to dispense the foam in interesting ways. 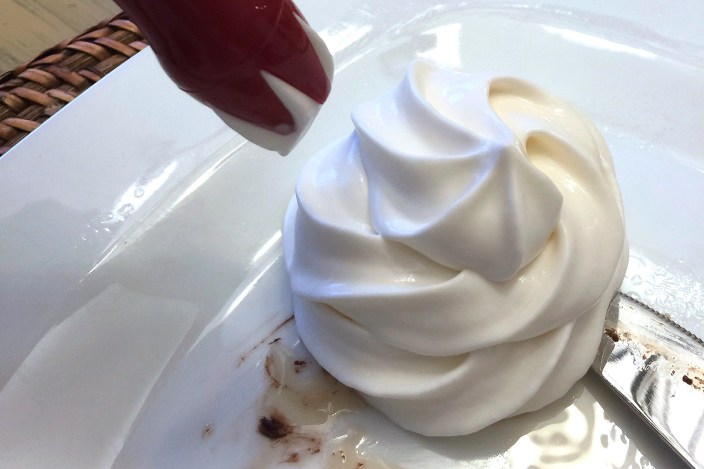 If you mix heavy cream, powdered sugar, and vanilla extract in an iSi Gourmet Whip, seal it, then add a charger of nitrous oxide, you get fresh homemade whipped cream that may well taste better than anything you’ve bought at a store. The Family Meal suggests the same technique with yogurt, cream, and sugar to make an incredibly delicious and light yogurt foam, which we’ve had several times and absolutely loved. 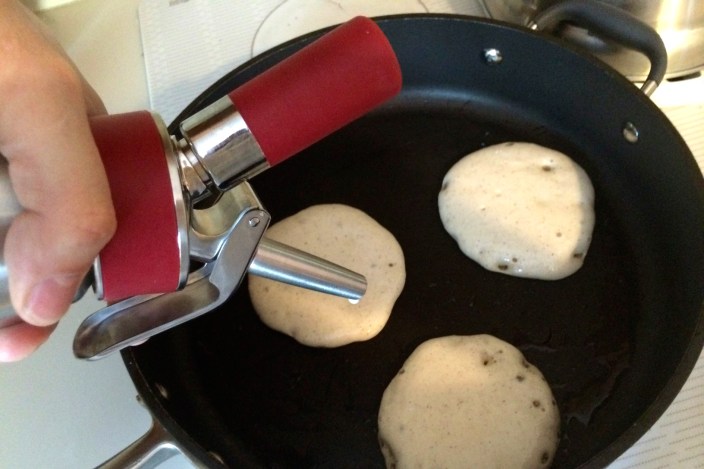 I held off on buying an iSi whip because they’re not cheap and I didn’t know how much real-world value I’d find in them. A one-pint iSi Gourmet Whip like the one I have currently sells for $104 on Amazon; a one-quart version sells for $133. iSi’s food-safe N2O chargers — the only ones I would personally trust, after learning about cheap, bad N2O chargers — sell for under $1 each in packs of 24 or more. 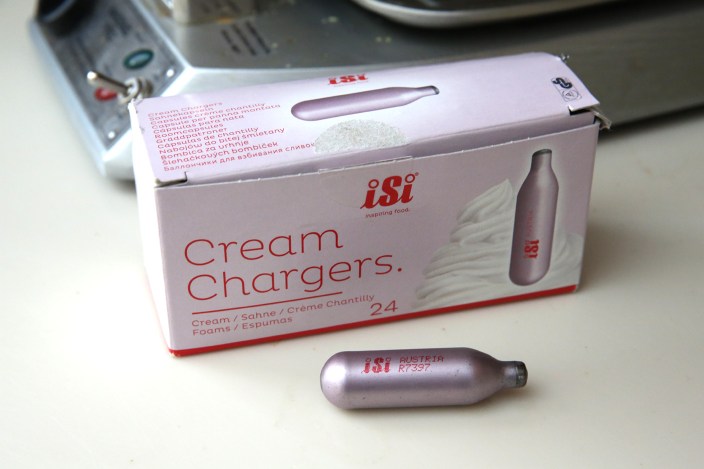 As it turns out, I should have just purchased the iSi Gourmet Whip and not bothered with the cheaper iSi Soda Siphon. The Gourmet Whip can use CO2 cartridges to carbonate thin liquids (and solids), as well as using N2O chargers with thick liquids, but the Soda Siphon is CO2-only, and can’t use N2O chargers. In other words, it’s good enough to only have the Gourmet Whip, because it can do everything… 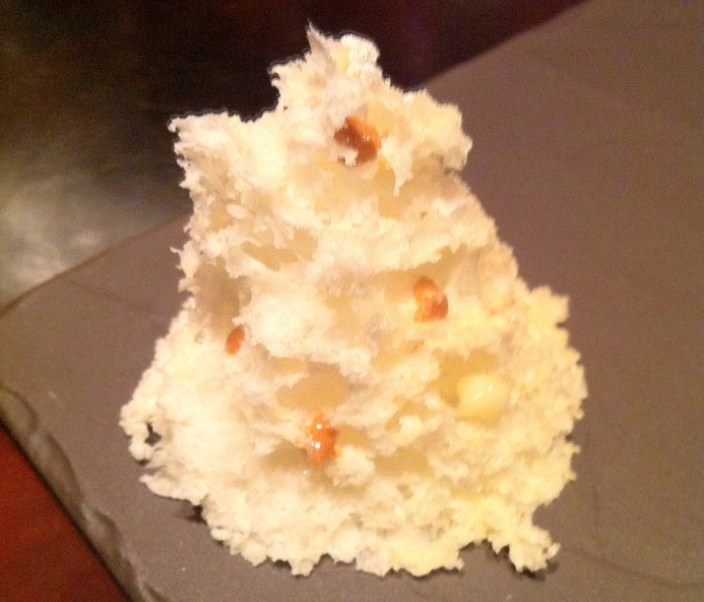 …and help you make cool things like this 25-Second Bizcocho cake, which uses an iSi Whip to create light cake batter that is quickly microwaved into a warm treat. Adapted by José Andrés from an Albert Adrià recipe (Black Sesame Microwave Sponge Cake and Miso), its fluffiness wouldn’t be possible without the N2O charge it receives from the iSi Whip. 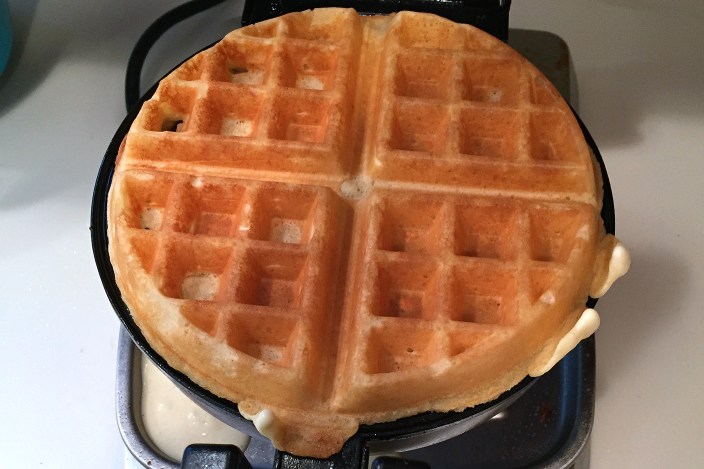 How Can I Use The iSi Gourmet Whip To Make Belgian Waffles?

Once you have a Gourmet Whip, you’ll find that there are lots of meringue, foam, and sauce recipes out there. Most of those recipes are self-explanatory and relatively few of them use the Gourmet Whip to create an entree, which is why I’ve focused instead on Belgian waffles. 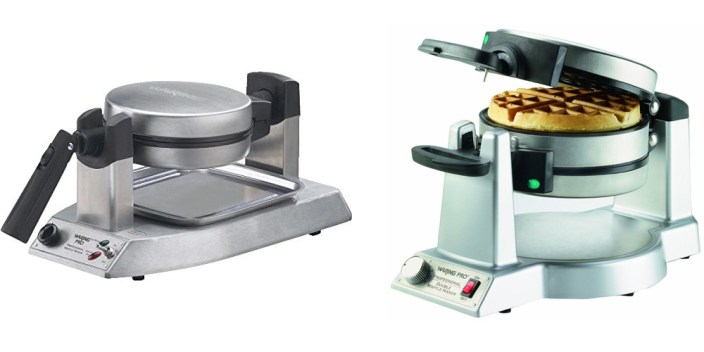 Belgian Waffles are big, deep waffles that look like oversized versions of the toaster waffles you find in stores. I personally have had this $57 Waring Pro model (shown above left) for years, and it does an amazingly good job of making one giant, delicious waffle at a time — typically a four-minute process. But I wish I was using the $100 double-waffle Waring Pro (shown above right) instead. They both work in the same way (put waffle batter inside, close lid, flip and wait for timer to go off), but you can cut the four-person waffle making time down from 16 minutes to 8, which makes a difference when a family’s watching giant-sized waffles get cold. 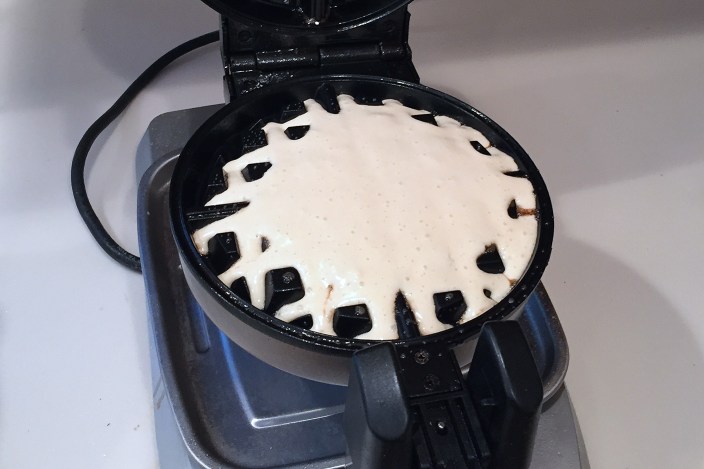 The only novel thing in this iSi Belgian Waffle recipe is the use of the Gourmet Whip and a charger to aerate the waffle batter — a trick that can also be used with store-bought waffle mix. iSi-aerating the batter cuts the density of the finished product in half, making waffles light and crispy. Nothing changes during the cooking process, though you may want to monitor your first air waffle to be sure you’re not cooking it too long. The same process works with pancake batter to make fluffier pancakes than you’ve ever had before, a neat trick that will let you enjoy a big stack of pancakes without as much guilt. 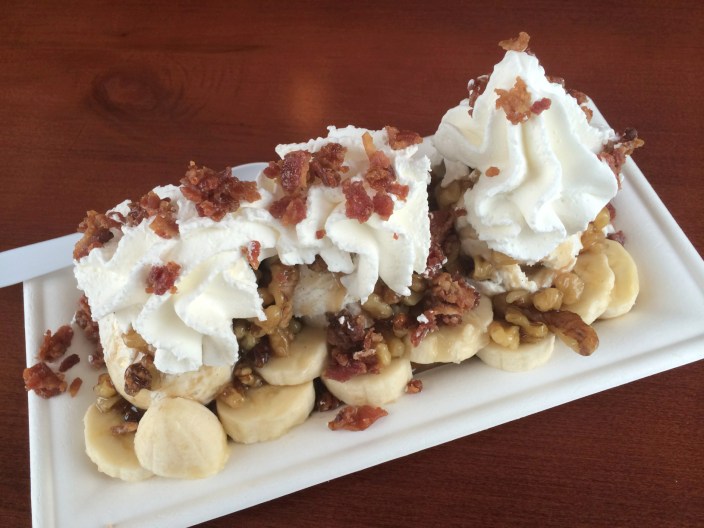 As simple as it sounds, the use of N2O chargers and the iSi Gourmet Whip really can make comfort foods better. In my house, the biggest challenge we have at breakfast time is deciding whether to use our Whip for yogurt foam or aerating pancake/waffle batter. And there’s always a good reason to have one around when making desserts calling for whipped cream, particularly if you want to make flavored whipped creams you can’t find in stores. There are many reasons professional chefs tend to have several iSi Whips, rather than just one…

Column 11: Learn how to use spherification to turn fruit juices, vegetables, cheeses, and cocktails into burst-in-your-mouth balls of liquid caviar.

Column 12: Carbonating tools including the SodaStream and iSi Soda Siphon help you make your own soda water and carbonated drinks at home, as well as fizzy fruits and desserts.