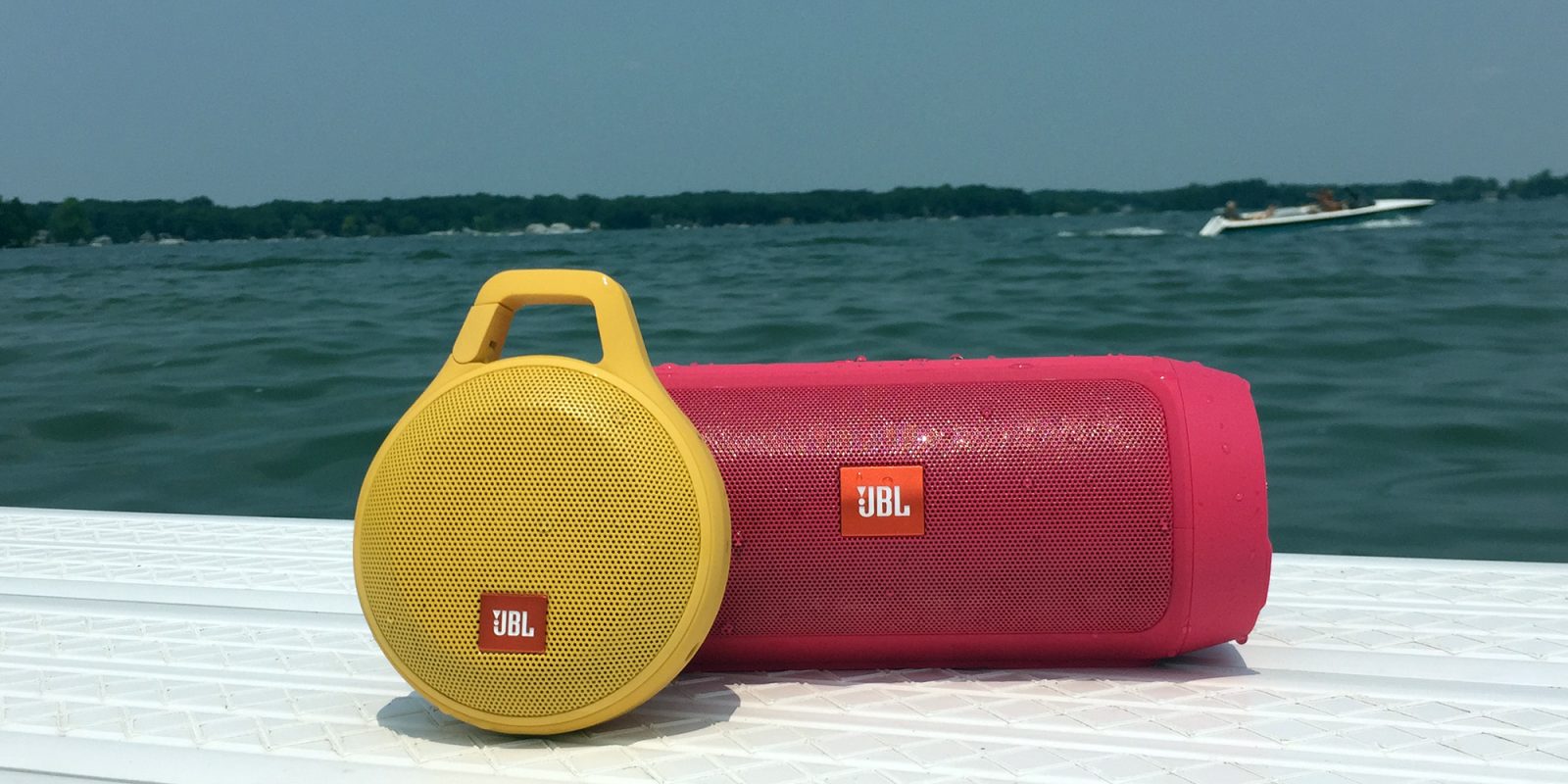 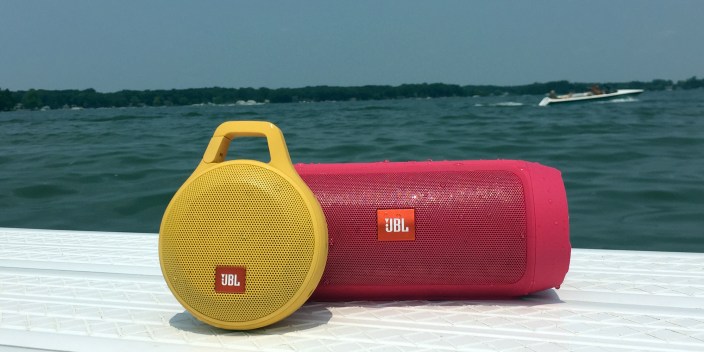 The Bluetooth speaker market is flooded, filled with options that promise “room-filling sound” or an ultra portable design that can still bring the noise. The reality is, often times those pledges are not fulfilled, leaving us with another speaker in the closet.

JBL’s latest releases, the Charge 2+ and Clip+, are both portable and splashproof Bluetooth speakers that also promise big sound in a small design. Over the last month, I’ve spent some time with both models and after a big July 4th weekend by the water, I’m ready to deliver a verdict. 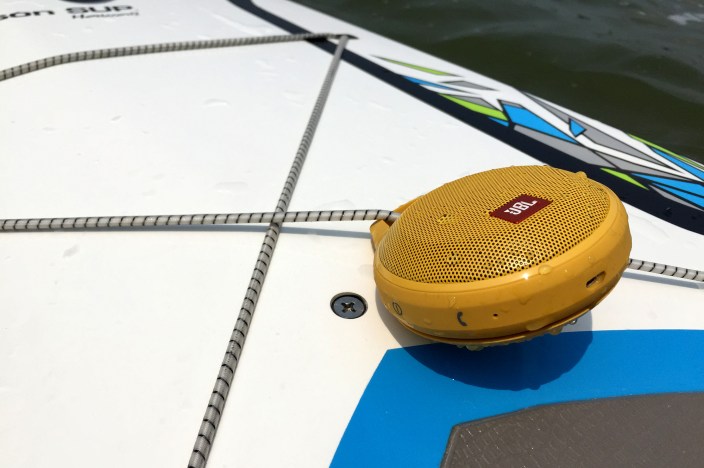 We’ll start with the Clip+, the smaller of the two speakers coming in with a $49.95 price tag. It has the same familiar design as the previous generation model: a circle speaker with controls on the side and a – surprise! – carabiner style clip on top. It has speakerphone capabilities and a built-in battery life of five hours with an included microUSB cable for charging. This estimate was pretty much spot on in my experience, its small form factor doesn’t allow much room for a larger capacity. It’s also splashproof, which means it can withstand small amounts of water from time to time but not full on submersion. Aside from Bluetooth capabilities, it has a built-in 3.5mm cord for a hardware connection if needed. 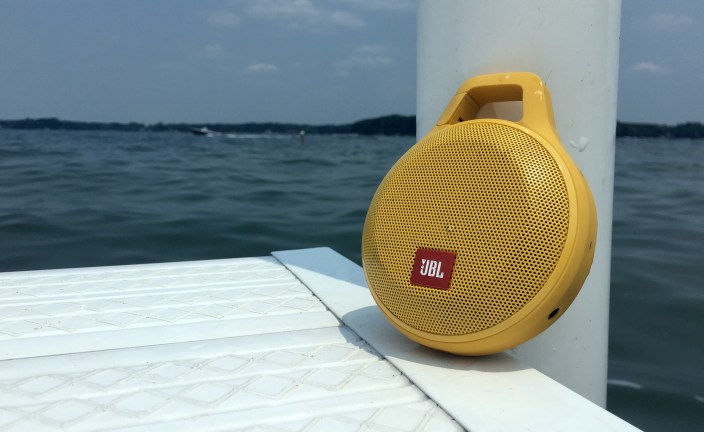 Make no mistake, the Clip+ isn’t going to fill a large living room or bedroom with sound, but it does put out quite a bit of noise. Listening within 5-10 feet is comfortable, going further away than that isn’t going to provide a large soundstage by any means. JBL’s Clip+ is very handy for outdoors activities. Over the past few weeks I’ve been strapping this speaker to my standup paddle board and playing music to it via my Apple Watch while I workout. It’s a great combination and even when I flipped my board the speaker continued to play just fine. From roughly eight feet away, it provided enough sound to comfortably enjoy my playlist. 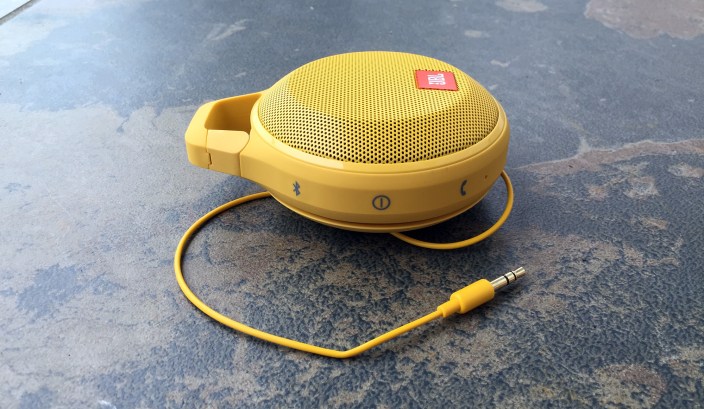 If you’re looking for a solid ultra-portable option that’s great for the outdoors or even the shower, I’d recommend picking up the Clip+. It’s not going to be a life changing audio experience, but it certainly isn’t a dud either. At $49.95 in a variety of colors, it’s worth a look. 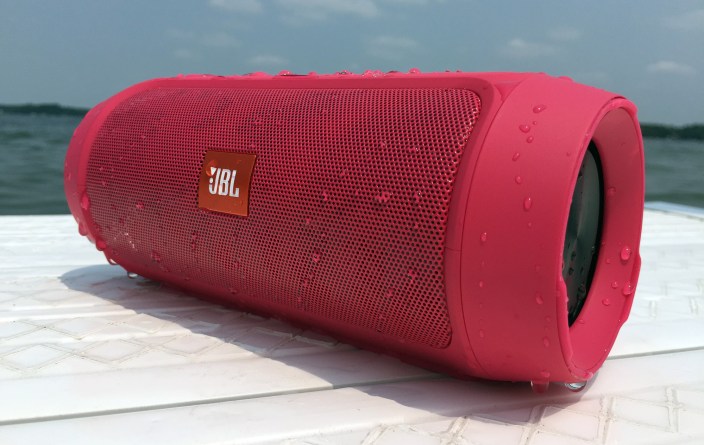 Now for the big boy: JBL’s Charge 2+ is a cool looking speaker. Unlike some other options out there, I’d gladly use it at a cookout or party. It comes in bright colors and has a sleek design with some pretty cool features. With 15 watts of power, it has enough juice to fill larger spaces comfortably without sounding too stressed. Like the Clip+, this speaker is splashproof, making it a great partner for the boat or beach. It has a built-in speakerphone and a 6,000mAh battery that is rated for 12 hours of playback, a wall charger is included with a microUSB cable. Even better, the power supply can charge your iPhone or other devices as well. It has playback and speakerphone controls on the top that light up. 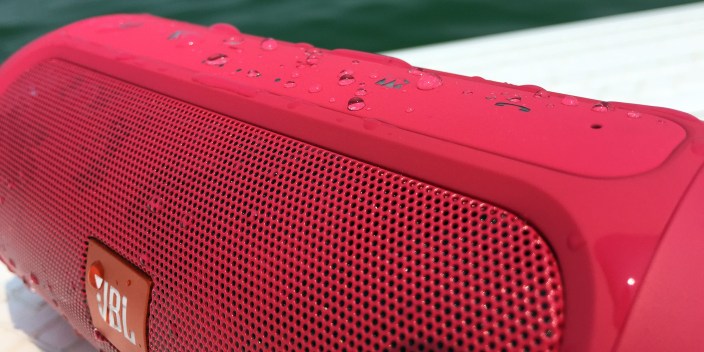 With a larger footprint, it’s going to hopefully in turn provide a bigger soundstage and more volume. The good news: JBL’s Charge 2+ didn’t disappoint. In larger closed spaces, this speaker managed to fill the room with sound and didn’t have any issues with distortion except with bass heavy tracks and the volume turned all the way up. Acoustic and vocal heavy tracks really shine, if you’re in to more mellow songs or tempered rock tracks this is one of the better performing Bluetooth speakers I’ve used. There isn’t a fake, bass heavy, sound that radiates from the Charge 2+, it’s fairly true to the music. 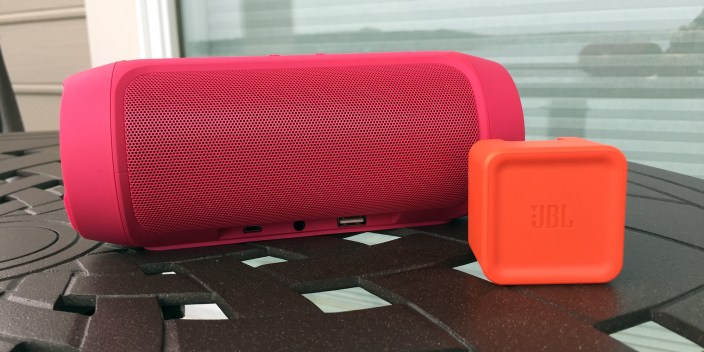 Moving to the outdoors: like many Bluetooth speakers, this JBL provides an adequate amount of sound in wide open spaces. When we used it on the boat, it had enough volume that we could hear it but it wasn’t a replacement for our built-in sound system. If you’re listening to it within 10-15 feet, it’s going to do a great job. The splashproof design held true for me, we had it on the beach and it took on waves just fine. Even the passive bass radiators on the side that actually have moving fabric pieces seemed to dry out without issue.

JBL’s Charge 2+ is a winner if you’re looking to use it under the right conditions. It will pump out enough volume to get a party going inside and can push out sufficient sound outside. It’s not as portable as the Clip+ or the Bose SoundLink, but it’ll still fit comfortably in a bag. The Charge 2+ retails for $149.95 and is available in eight colors all together.