Unboxing and Review: Star Wars Battlefront limited edition PS4 is out of this galaxy [Video]

Today we’re taking a look at the new limited edition Star Wars Battlefront Playstation 4. Obviously, there’s not much to say here as far as functionality goes, because well.. It’s a PS4. Pretty straightforward in that department, but the design is on another level…

This thing looks so good. It’s mostly glossy, which is kind of a downside, but I can easily forgive that because of the details here. Inside of the box, you’ll get the usual stuff from Sony like the power cable, HDMI cable, Micro USB cable, and a cheap little mono headset. But being the special edition that it is, you also get the Star Wars Battlefront Deluxe Edition inside and some extra downloadable content.

Check out our unboxing & review video below:

Again, this video is mainly about that design. That sleek Darth Vader graphic isn’t just some sticker, it’s actually a part of the console and hot damn is it awesome. Along with that, all around the Darth Vader design you’ll find the Star Wars logo etched into the plastic. It’s a pretty epic look and even comes with a controller to fit along with the theme here. The controller features a mostly glossy front, red directional pad, and a multi-color button theme in red, blue and gray. And like the console design, the controller’s touchpad also has the same Star Wars etching going on. It’s a nice controller, but honestly not nearly as cool as the console design and the red and blue buttons don’t look that great to me. Regardless of that, it carries out the star wars theme nicely and is a great addition to your custom controller arsenal.

Unfortunately, there are no custom console sounds like you’ll find with the Halo 5 Xbox One I covered a while back, but either way the console design here is just awesome. I wouldn’t really recommend buying this if you already have a PS4, because well it’s just not logical, but you can totally customize an existing PS4 or Xbox with a skin as well, which spices things up a bit. 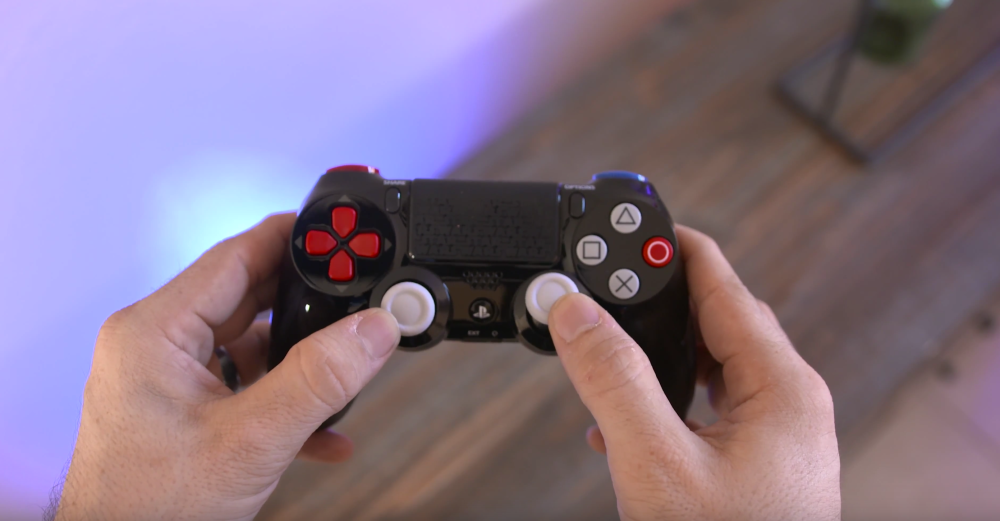 Moving along, the internal drive is 500GB, so you’re not getting more space over buying a standard PS4 for $349. The extra $50 this tricked out $399 version will run you is paid back in pure Star Wars. It’s obviously not a console you’ll want to hide away on a shelf, but one to show off. Because of that, I highly recommend grabbing the PlayStation 4 stand to keep it upright on top of your TV stand. At least that way, you can appreciate the extra money spent.

Overall, I think this console looks pretty sweet and is an absolute must-have item for any Star Wars fan. There’s no doubt about that. Whether or not that sweet look is worth the money will be up to you, but you can always save the cash, pickup Star War Battlefront, and load up on some intergalactic Star Wars gaming accessories if you wanna go that route. The Darth Vader controller is even available separately . Let us know what you think about the new Star Wars Battlefront PS4 in the comments below.