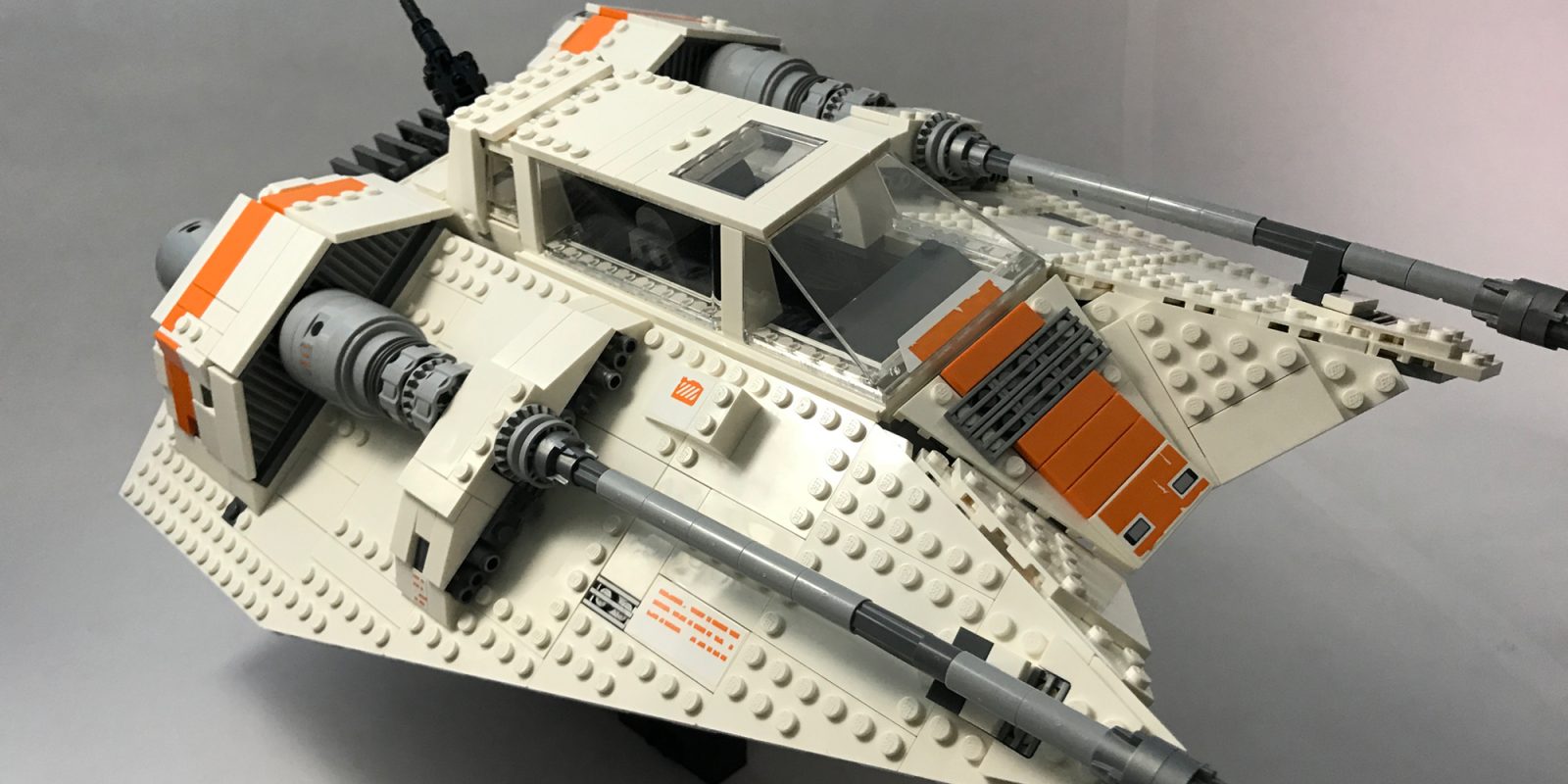 As we learned in March, LEGO would be expanding its Star Wars Ultimate Collector Series lineup with the T-47 Snowspeeder. Following the set’s release on May 4th, we here at Toys got our hands on the iconic brick-built vehicle. While Star Wars fans know how important the ship was in Empire Strikes Back, we can certainly say that the LEGO model lives up to the iconic Rebel Speeder. Head below for an in depth look…

The UCS Snowspeeder is comprised of 1,703 pieces, which come sorted in 13 individual bags. A 300+ page instruction booklet and sheet of applicable stickers are included as well. The set is complete with a display stand, information plaque and two Rebel Pilot minifigures. The instruction book provides background information about the Snowspeeder including some facts and stats that are on the UCS plaque.

In terms of actually completing the model, it took around three and a half hours of constant building to finish, but your mileage may vary. The completed set weighs in at over 2-lbs and measures up to over a foot long and 8-inches wide. 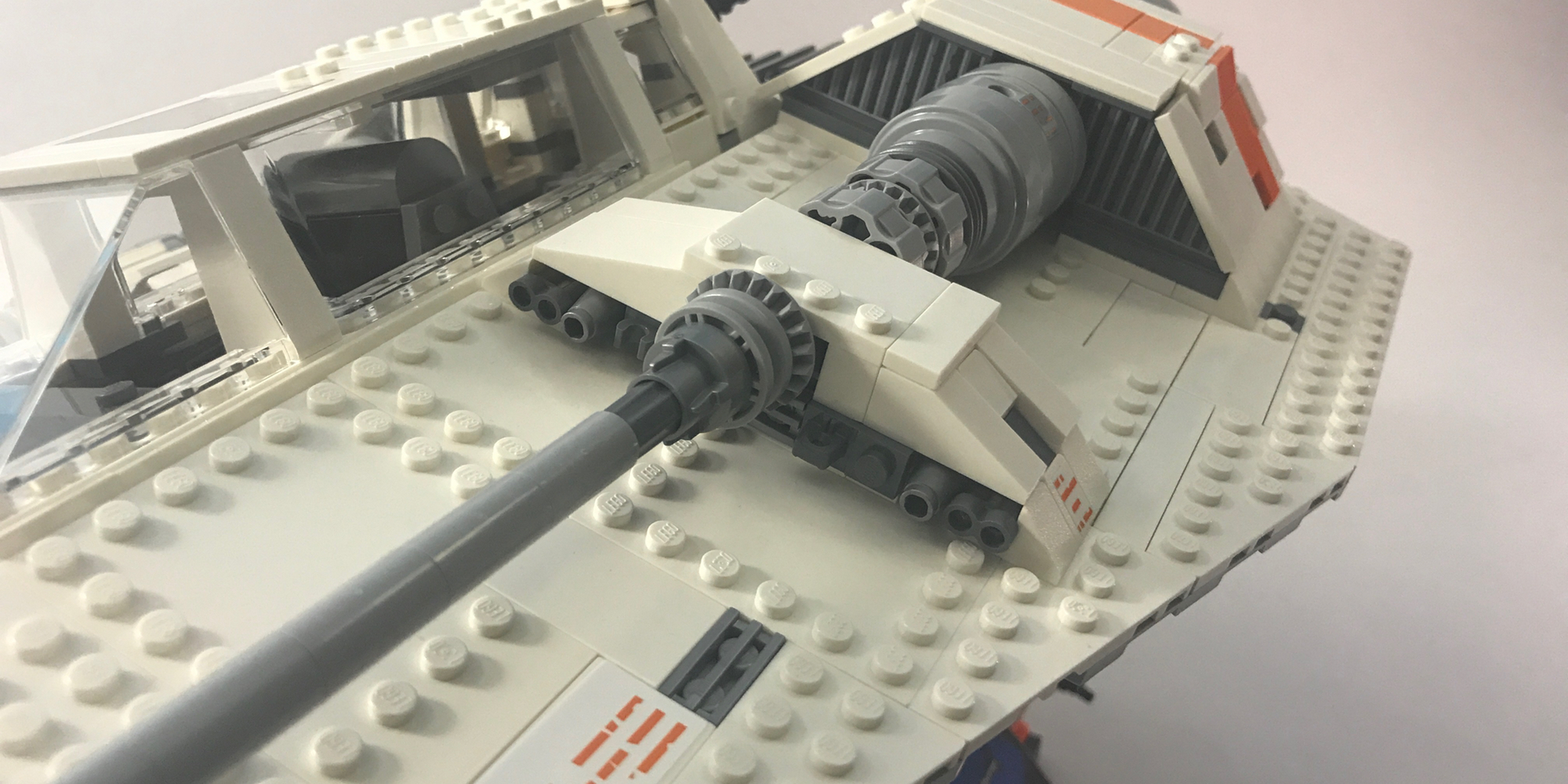 It also stays true to the original design of the Star Wars’ vehicle. The Snowspeeder accomplishes all of the tricky slopes and angles of the ship’s design, which isn’t always easy when working with LEGO. Colors and other accent pieces are also spot on.

Even though it was a fairly lengthy build, I wouldn’t say that the USC Snowspeeder is a difficult set to assemble. The steps are fairly straightforward, and aside from the massive size of the model as well as the length of the build, I’d say that there isn’t anything else worth noting in terms of difficulty.

As you can probably infer from the name, the Snowspeeder is primarily comprised of white, as well as grey LEGO elements. That being said, there’s still a fair share of orange accent pieces which are a nice addition. Overall, at just over 1,700 pieces, the set isn’t the most fantastic in terms of parts per dollar, but it isn’t the worst offender either. 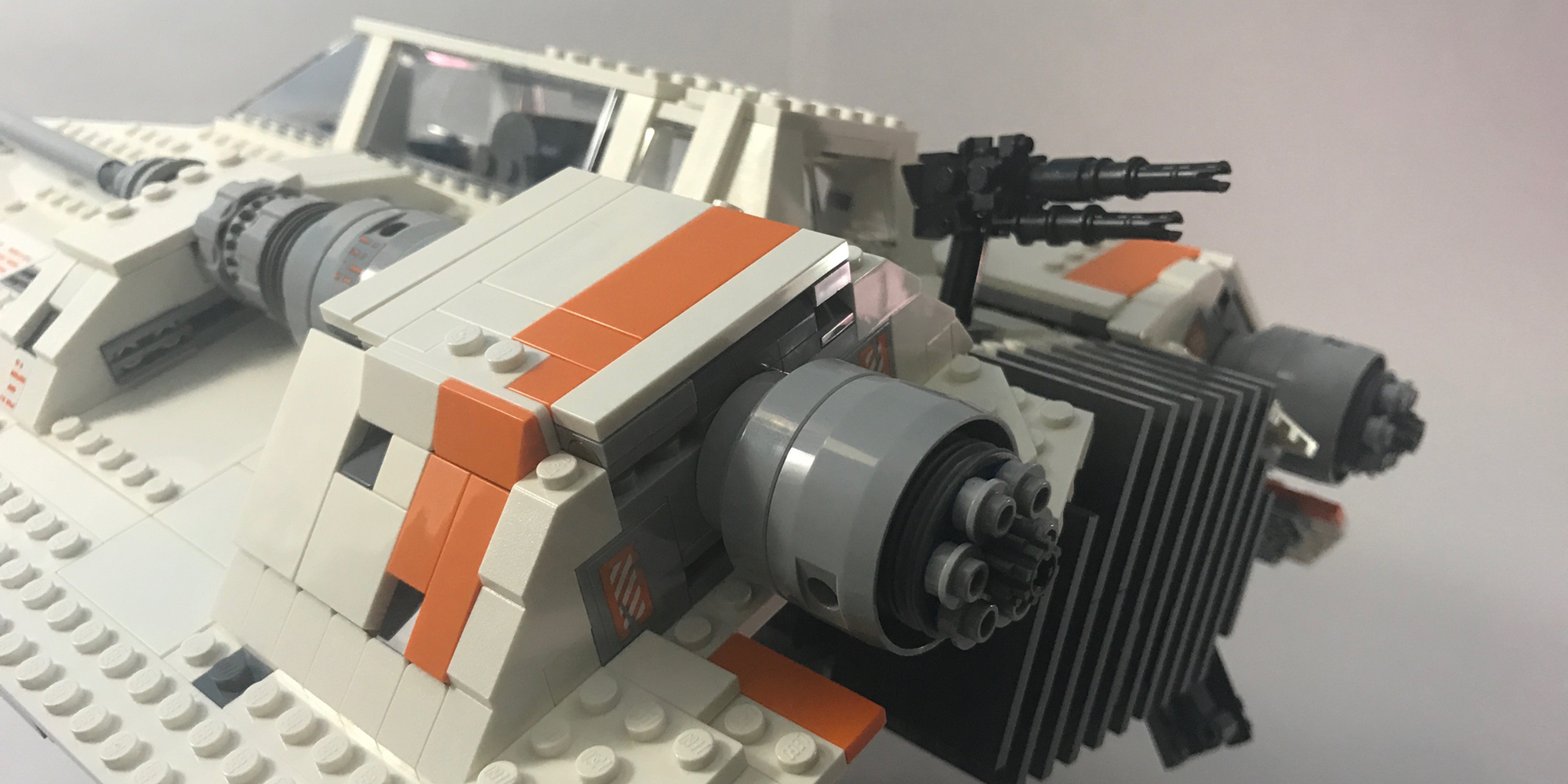 Recent LEGO sets have been criticized for relying too much on the use of stickers to add detail. The UCS set is no exception to this, but it does contain quite a bit of elements with printed on detail, which is definitely a plus.

While the UCS Snowspeeder is in fact a set meant to display, that doesn’t mean it isn’t without its ‘play features’. While you won’t find flick-fire missiles or anything else of the sort, there’s still a variety of elements on the ship that add to the overall authenticity of the model.

For starters, the cockpit opens to showcase the ship’s controls as well as the back-to-back seats. The rear engine panels also open and close, all by rotating the circular thrusters. The rear exhaust flaps can be adjusted as well. Finally, the grappling hook blaster on the back of the speeder can be pivoted by twisting the control-panel within the cockpit.

The first LEGO Snowspeeder set was released in 1999 and since then, I’ve owned pretty much every variant of the set that has been released. While this is certainly the most massive, its also my favorite in both build-quality and the final model. On the other-hand, I haven’t had the fortune of building any of the other recent UCS sets, so I don’t have a lot of first-hand experience to compare to.

LEGO’s Star Wars Ultimate Collector Series Snowspeeder retails for $199.99 and is currently available. While it may be a on the expensive side, I would absolutely recommend the set to both LEGO and Star Wars fans alike. If you have a spot on your shelf that is dying to be filled by a massive Star Wars’ vehicle, then the UCS Snowspeeder is definitely the way to go.