Review: Technic BMW R 1200 GS Adventure is a sturdy kit and an even more solid bargain 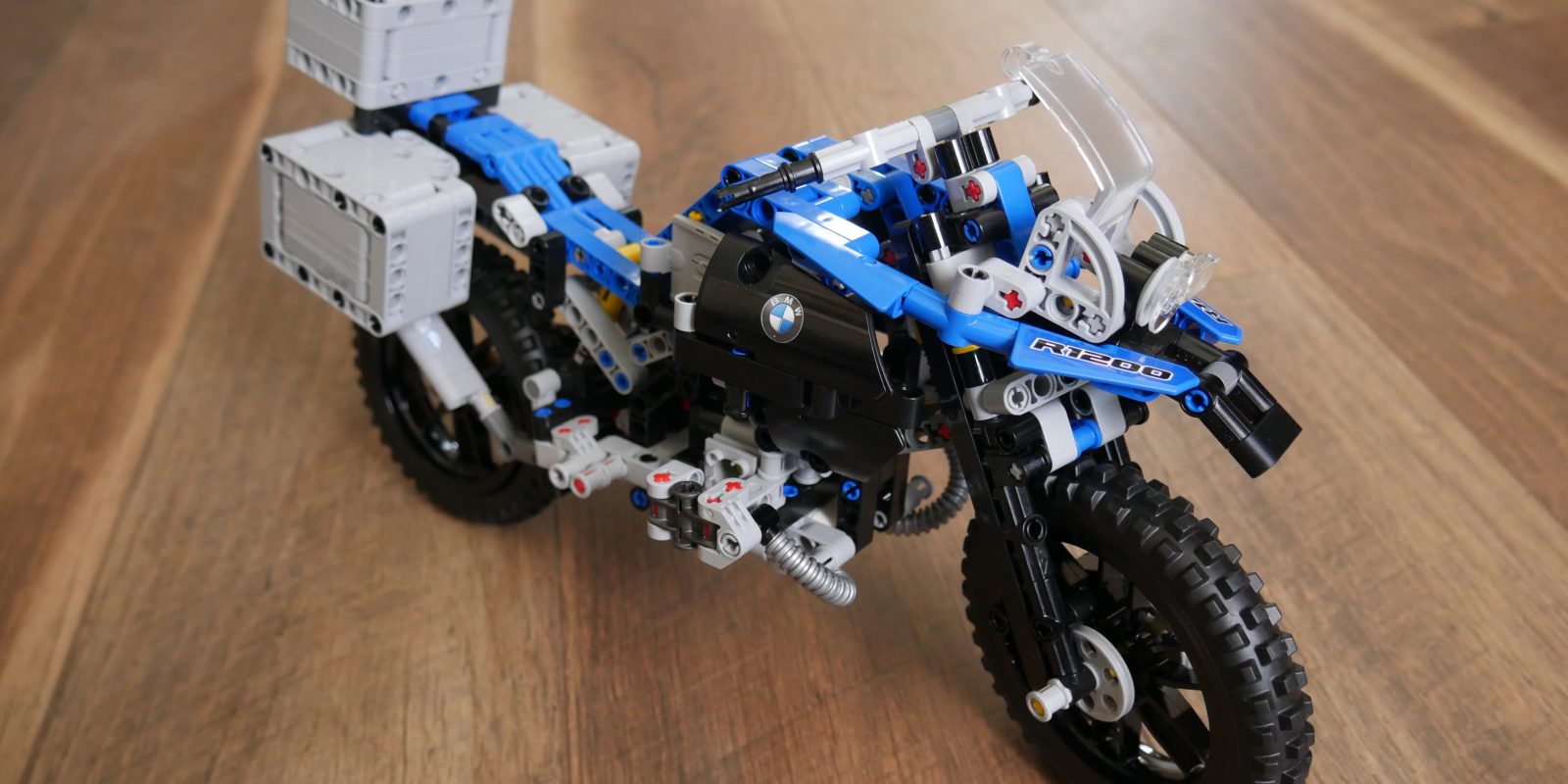 Growing up, I was never a huge fan of cars or motorcycles. That carried over into the LEGO sets I longed for, with most of my collection centered around spaceships and the like. So when it came to the Technic kits, ones primarily consisting of vehicles, they never really caught my eye.

But that changed earlier this year with the release of the BMW R 1200 GS Adventure set, the first licensed motorcycle in the lineup. And after getting my hands on it, I’ve realized everything I’ve been missing out on  with the Technic series.

It won’t come as any surprise, but I’ve been a fan of LEGO for just about as long as I can remember. But looking back on my catalog of assembled kits, it’s pretty evident that Technic models weren’t very popular for me growing up. In fact, it’s been around 15 years since I’ve assembled a set, with 2002’s Star Wars R2-D2 being my first and only. In the past decade and a half I’ve missed out on some of the arguably most impressive sets released to date, but that all ends today.

It’s safe to say that when I got my hands on the Technic 42063 BMW R 1200 GS Adventure set, not only was it a long time coming, but an utter delight after being away from the series for so long. While I won’t be able to offer insight into how it compares to previously released Technic sets, the BMW Motorcycle is still a notably impressive build for what is effectively my first Technic model. 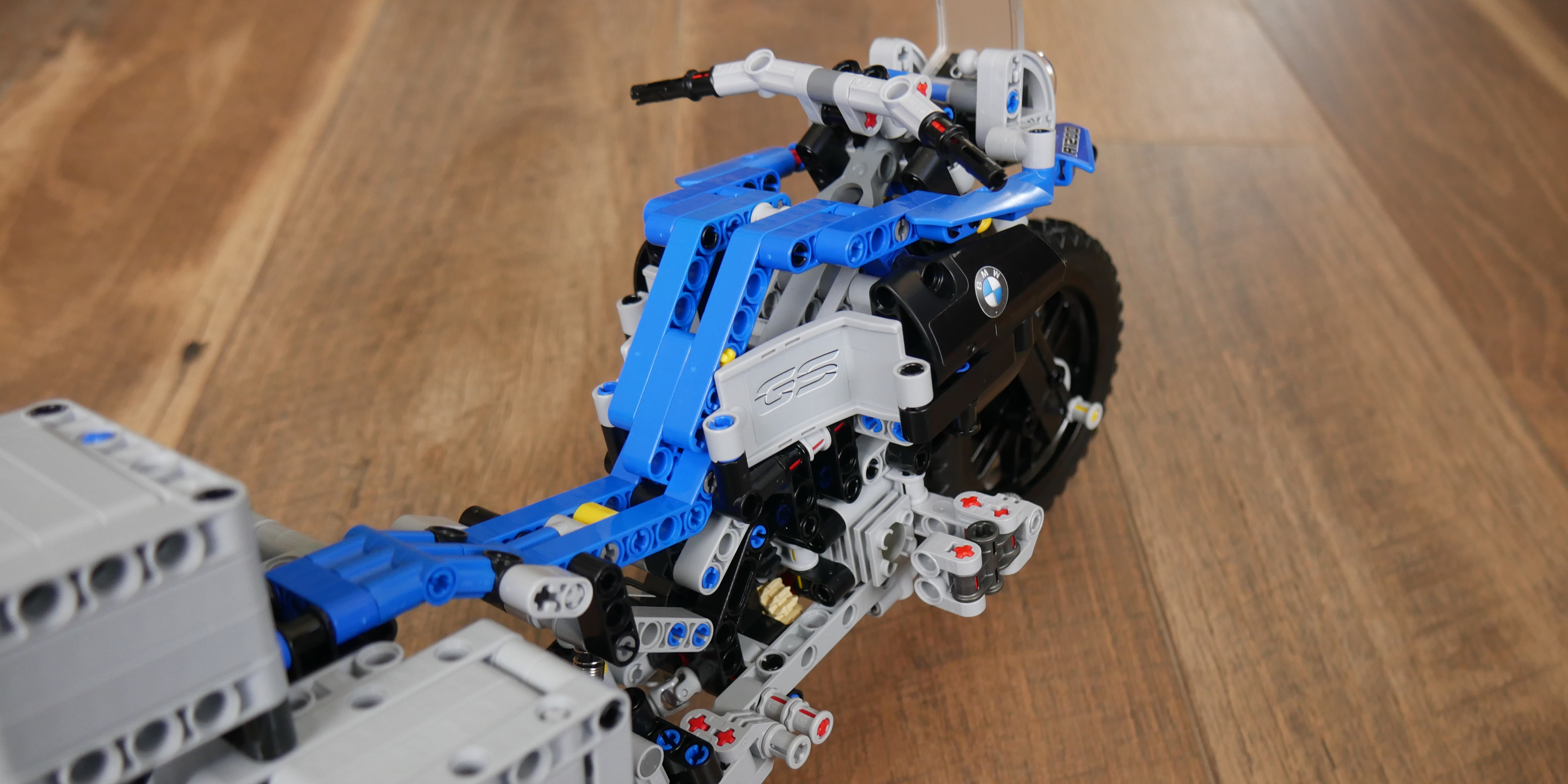 Including just over 600 pieces and a $60 retail price, the BMW R 1200 GS Adventure set is the first officially licensed of the Technic motorcycles. Like many of the other Technic kits, this too can be rebuilt into several different models and sports a futuristic hoverbike configuration in addition to the main BMW R 1200 GS motorcycle.

Despite there being an alternate build, we’ll mainly be focusing on the star of the show, the BMW Motorcycle. This year marks the 40th anniversary of the Technic lineup as well, which is commemorated within the set.

Thanks to the partnership with BMW, the GS Adventure kit features a more interesting instruction booklet than normal. While not as information packed as you’d find with the Architecture Arc De Tromphe, it’s still a notable amount of added detail compared to your run of the mill model. There are 6 pages of informational content in total placed at the end of the first booklet, which isn’t the most ideal location for what is typically considered premium content. 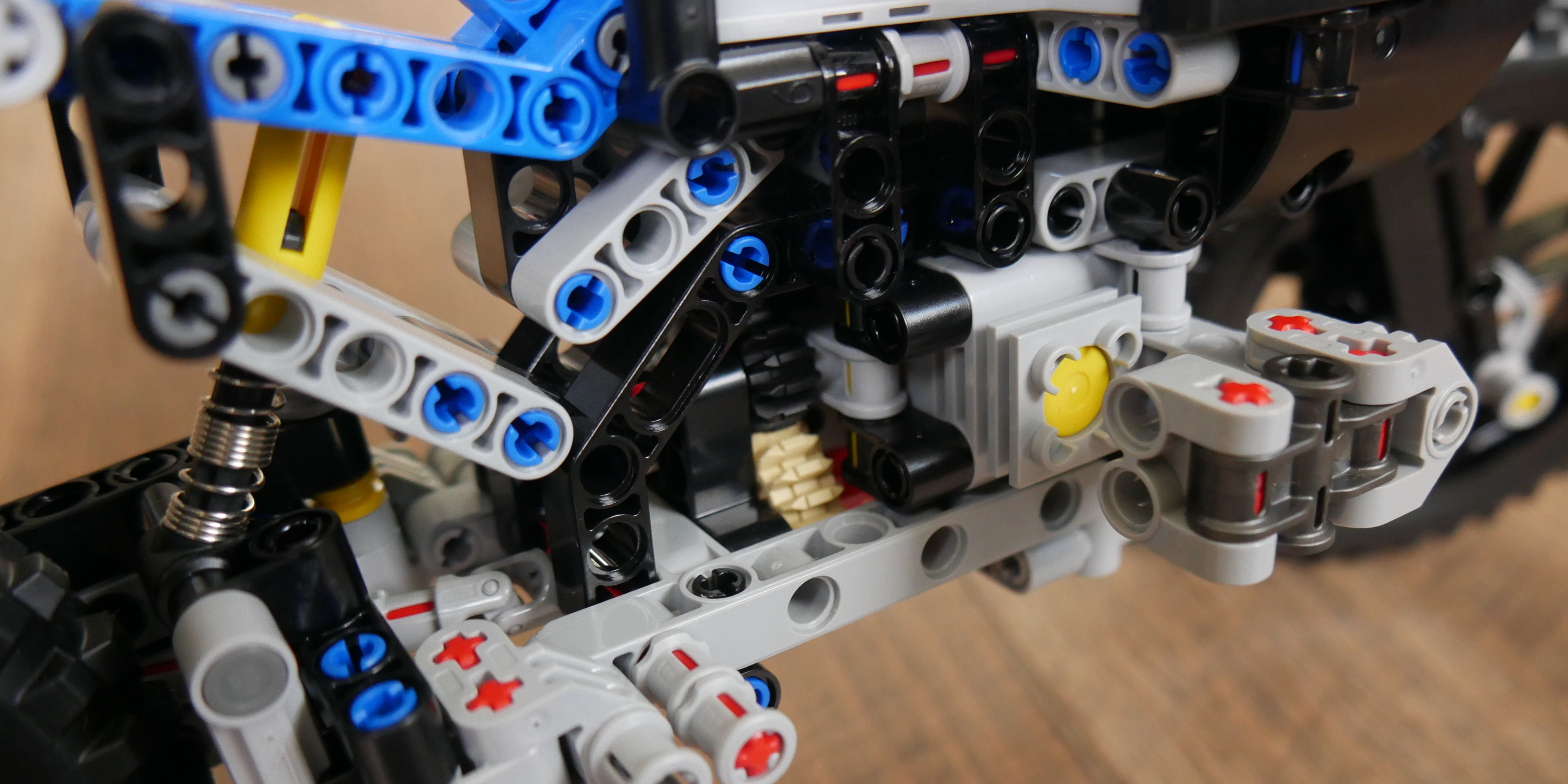 First and foremost, the BMW Motorcycle is an extremely solid build. As a kid, I did my fair share of swooshing LEGO starfighters through the air, which almost always ended up in my prized creations taking some damage.

But the Technic BMW bike on the other hand is an extremely well-thought out build that pairs functionality with sturdiness. That’s to say that it should have no problem holding up to more rugged sessions of play, if that’s your thing. Thanks to the Technic beams and other elements, the bike is sturdier compared to its brick-built counterparts.

Additionally, the bike’s internals are more than satisfying from a collector’s perspective. The kits main feature is the central drive shaft which the entirety of the build is centered around. This connects a nifty 2-cylinder engine with the motorcycle’s rear wheel through a series of gears and other elements, which are, for the most part, visible. 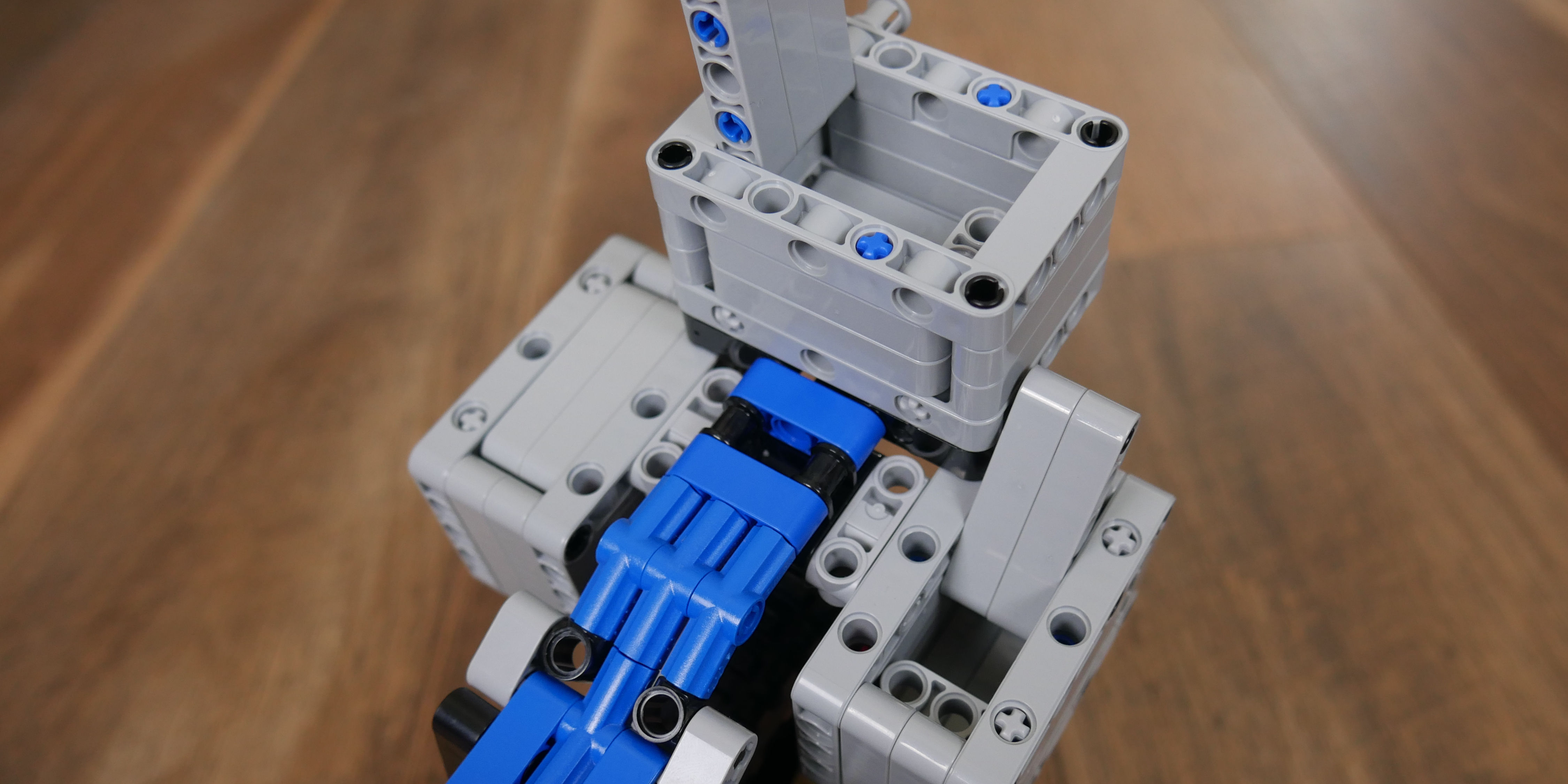 The frame is also built around two spring-based shock absorbers which offer a more realistic suspension system. This adds to the set’s overall authenticity, but also brings in some additional play features. Of course, it’s hard to ignore the BMW’s massive tires which round out the kit’s wonderful design. On the very bottom of the model you’ll find a 1 x 3 beam element celebrating Technic’s 40th anniversary.

As someone who isn’t the biggest fan of motorcycles, it’s hard for me to truly appreciate the design of the Technic BMW R 1200 GS Adventure. But compared to the real-life version of the motorcycle, the LEGO designers have done such a phenomenal job recreating the vehicle’s signature curves and aesthetic.

While most of the bike’s interval structure is a more neutral black or gray, the exterior is framed by an eye-catching blue that captures the shape of the bike quite perfectly. 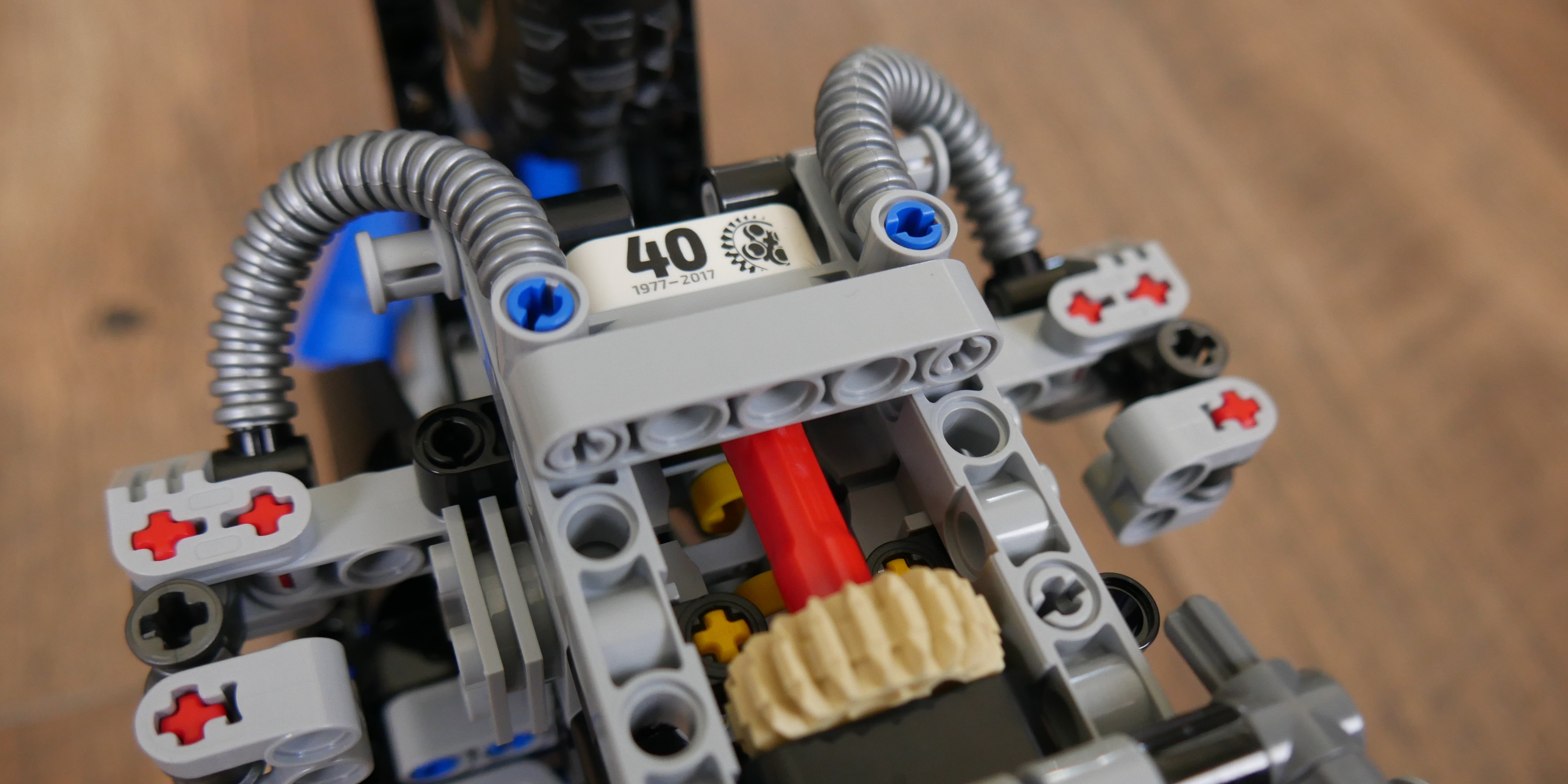 The front of the motorcycle is highlighted by a curved clear Technic panel that serves as the windshield. This piece does an extremely effective job and is a nice part of the set, but requires the placement of a super tricky sticker. Turning to the rear of the BWM GS Adventure you’ll find three of the vehicle’s signature storage compartments. These are fairly simplistic in terms of their design, but are a really nice added touch.

As my first Technic build in nearly a life time, this will most likely be the first of many down the road. The Technic BMW R 1200 GS Adventure packs an impressive size and puts its 600 pieces to great use, resulting in a complex build that in my opinion is a steal at its retail price.

Younger fans of LEGO will absolutely adore the set for its play features, while older collectors will find the bike a wonderful addition to their collections. While I’m certainly in agreement with the latter, I’m sure even the 10-year-old me would have been thrilled to assemble the BMW motorcycle.