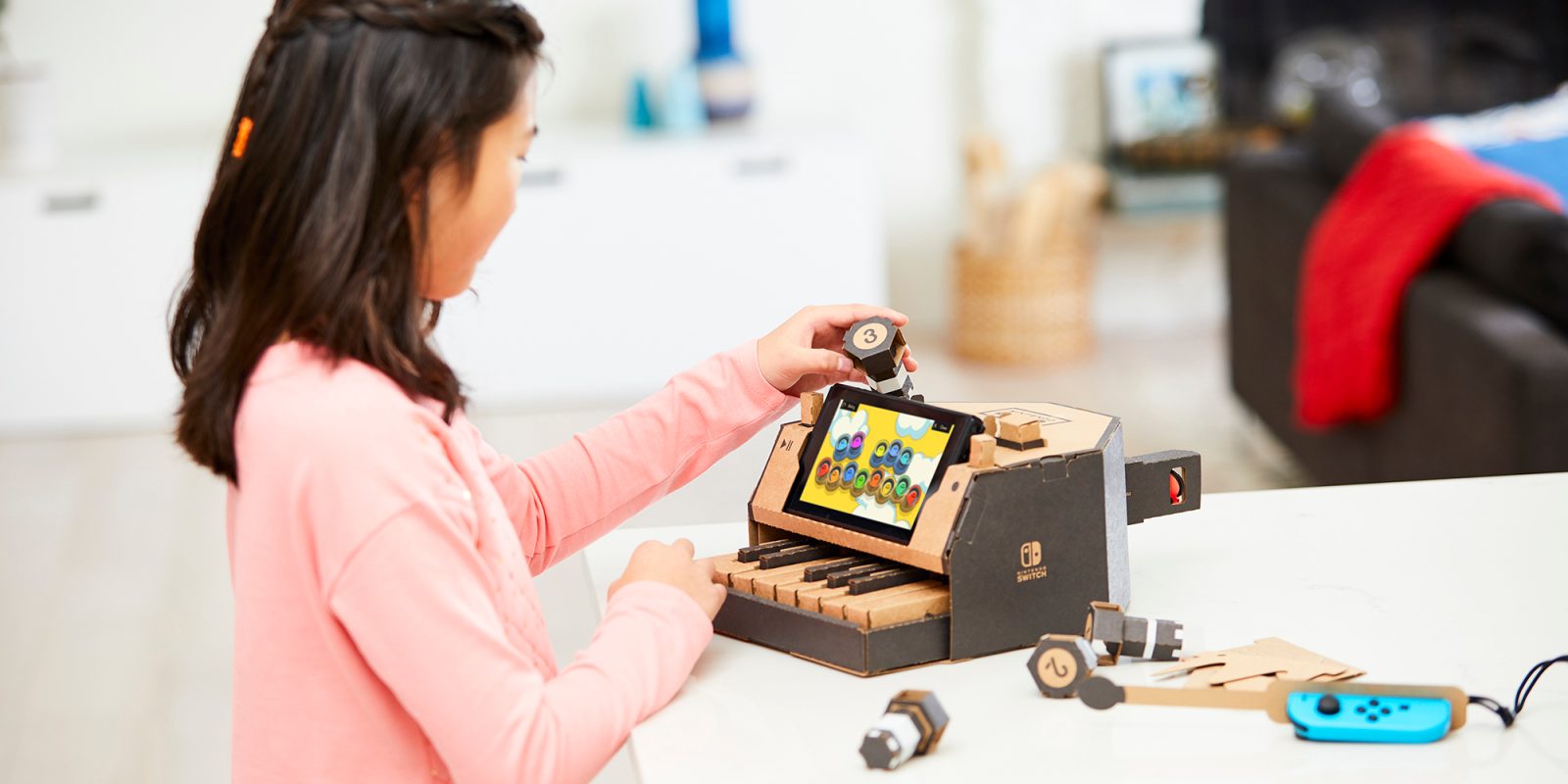 Update: The Robot and Variety kits are now available for pre-order at Amazon.

Nintendo Switch was arguably the hottest release of 2017, with gamers new and old flocking to the beloved manufacturer’s latest console. Fast forward to today, and Nintendo is tapping into a whole new way of enjoying its handheld system.

Today’s fresh approach is called Nintendo Labo, and it features a DIY system of cardboard accessories that can transform Switch into a wide range of neat projects. That includes everything from a robot suit, to piano, fishing rod and more. Combining Switch’s Joy-Con controllers with these cardboard builds opens up a whole new range of mini-games. Nintendo is hoping to tap into the ever-expanding ‘maker’ culture while also bringing a tactile, real-life experience to kids.

Nintendo Labo is broken up into three different characteristics: make, play and discover. It starts with a DIY kit that includes a variety of cardboard kits, instructions and a Switch cartridge, along with necessary accessories for completing each build. The game itself provides a step-by-step guide for building each project, with a game to follow once its setup.

One of the coolest projects in the ‘play’ area of Labo is a little car that actually leverages the Joy-Cons’ built-in vibration motors. By inserting the two controllers into the cardboard, gamers can then drive around their new four-wheeled creation with the Switch itself, while the vibrations cause the vehicle to move.

Early testers are lauding the fully-functional 13-key piano as one of the coolest builds out there. Leveraging the Joy-Cons once again, users slide each side into a cardboard slot that detects movements of the cardboard keys. Movement is then reflected on the same key layout shown on your Switch’s display.

There’s a whole number of other unique builds available in Labo, with more guaranteed to be on the way. It’s easy to forecast developers integrating this add-on kit in the near future with content-specific activities. Either way, good on Nintendo for taking Switch to a whole different level of integration and cashing in on STEM and Maker trends.

Nintendo Labo will be available on April 20th in two different versions. The Variety Kit will sell for $70 and feature the RC car, piano and fishing builds. An upgraded Robot Kit is slated to go for $80.

REDMOND, Wash.–(BUSINESS WIRE)–Introducing Nintendo Labo, a new line of interactive build-and-play experiences designed to inspire kids and those who are kids-at-heart. Building on the 129-year history of Nintendo, which is rooted in innovative entertainment and game-play experiences, Nintendo Labo continues the company’s mission of putting smiles on people’s faces.

With each Nintendo Labo kit, kids can transform modular sheets of cardboard – specially designed to interact with the Nintendo Switch console and Joy-Con controllers – into creations called Toy-Con. From a piano to a motorbike, a robot and more, each Toy-Con comes to life when combined with Nintendo Switch in different ways. As you build, you will have fun discovering how the technology works, and might even invent new ways to play with each Toy-Con!

For example, you can build a functioning 13-key piano that brings your musical creations to life once the Nintendo Switch console and Right Joy-Con controller are inserted. As you play, the IR Motion Camera in the Right Joy-Con detects which keys are pressed and translates them into unique notes that are heard through the console. You can even take control of your very own motorbike by constructing a functioning set of handlebars, with a Joy-Con inserted in each side and the Nintendo Switch console cradled in the middle. Simply hit the ignition button, turn the right handle to engage the accelerator and watch your adventure unfold on the Nintendo Switch screen, as you race to new destinations.

“Nintendo Labo continues our longstanding mission of making people smile by surprising them with new experiences,” said Reggie Fils-Aime, Nintendo of America’s President and COO. “It is an exciting evolution of the Nintendo Switch platform – one designed to inspire curiosity, creativity and imagination in people of all ages.”

With Nintendo Labo, building is just as much fun as playing. Every Toy-Con creation presents exciting challenges and varying degrees of complexity, making each one a unique experience. Building Toy-Con is especially fun with family and friends, as you collaborate and share each other’s Nintendo Labo experiences. Once built, you can customize your Toy-Con creations with your own markers, stickers and paint to give them a personal touch – the only limit is your imagination!

Nintendo Labo launches on April 20 with two kits: the Variety Kit and the Robot Kit. With the Variety Kit, you can create many different Toy-Con, including two Toy-Con RC Cars, a Toy-Con Fishing Rod, a Toy-Con House, a Toy-Con Motorbike and a Toy-Con Piano. With the Robot Kit, you can build an interactive robot suit with a visor, backpack and straps for your hands and feet, which you can then wear to assume control of a giant in-game robot. Both kits include everything you need to assemble your Toy-Con creations, including the building materials and relevant Nintendo Switch software. The Variety Kit will be available at a suggested retail price of $69.99, and the Robot Kit will be available at a suggested retail price of $79.99. A special Customization Set that includes fun stencils, stickers and colored tape will also be available to purchase on April 20 at a suggested retail price of $9.99.

Each Nintendo Labo kit packs plenty of value, with a range of ways to make, play and discover in each kit:

Remember that Nintendo Switch features parental controls that let adults manage the content their children can access. For more information about other features, visit https://www.nintendo.com/switch/features.

About Nintendo: The worldwide pioneer in the creation of interactive entertainment, Nintendo Co., Ltd., of Kyoto, Japan, manufactures and markets hardware and software for its Nintendo Switch™ system and the Nintendo 3DS™ family of portable systems. Since 1983, when it launched the Nintendo Entertainment System™, Nintendo has sold more than 4.5 billion video games and more than 710 million hardware units globally, including Nintendo Switch and the Nintendo 3DS family of systems, as well as the Game Boy™, Game Boy Advance, Nintendo DS™ family of systems, Super NES™, Nintendo 64™, Nintendo GameCube™, Wii™ and Wii U™ systems. It has also created industry icons that have become well-known, household names, such as Mario, Donkey Kong, Metroid, Zelda and Pokémon. A wholly owned subsidiary, Nintendo of America Inc., based in Redmond, Wash., serves as headquarters for Nintendo’s operations in the Americas. For more information about Nintendo, please visit the company’s website at https://www.nintendo.com/.

Note to editors: Nintendo press materials are available at https://press.nintendo.com, a password-protected site. To obtain a login, please register on the site.