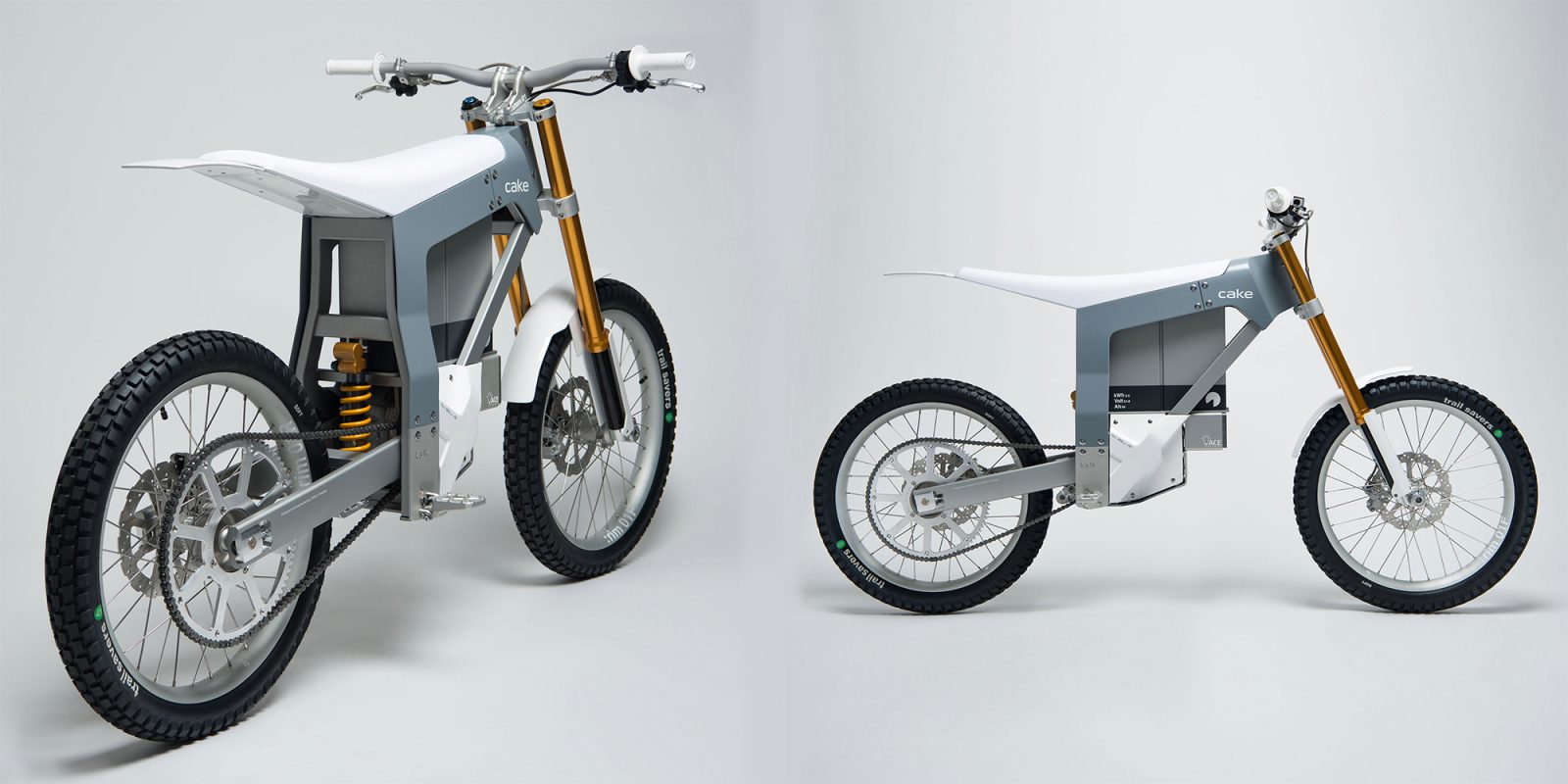 We’ve seen our fair share of electric bikes over the last few years, ranging from decidedly modern to minimalistic designs. But this one from Cake may very well…well, take the cake. The new Kalk electric bike sports an intriguing design that blends both clean lines and industrial cues into one of the more unique two-wheelers we’ve come across.

Slated to ship in late 2018, the Kalk eBike from Cake features impressive top speeds at nearly 50MPH with a maximum range of 50-miles to match. Head below for more details, including how you can pre-order your own.

The Swedish-based Cake is unveiling its first electric bike with Kalk, which is riddled with exclusive parts that you won’t find on any other two-wheeler on the market. Clean lines and a cool blueish-gray paint job set Kalk apart from the competition in a handful of ways.

Cake says that it has committed a large amount of time to developing parts that meet its standards for durability and weight. The frame itself is made of 6061 aluminum while the body is shaped from carbon fiber, both of which help cut-down on bulk that can slice into a battery’s range.

The CAKE KALK bike, built for light off-road performance, uses an industrial standard IPM motor, customized for CAKE and made in Europe. It’s a 15 kW mid motor, powered by a 51.8 Volt, 50Ah battery for torque and range, conducted by specifically developed and tuned software, for the controller and dynamic performance.

A 51-volt power supply pushes out 50Ah and 2.6kWh across three riding modes. Regenerative braking allows for the battery to recoup some lost energy while riding. The three ride settings allow users to gradually unleash the full power of this eBike. Initially, speeds are limited as riders get used to the controls and handling. This also helps extend range if largely commuting in urban areas.

Cake is now accepting pre-orders for its Kalk electric bike. With a final MSRP of $14,000, it’s certainly pricier than some of the alternatives that we’ve featured here previously. A down payment of $1,000 will deliver a new Kalk by the end of 2018 if all goes to plan. The initial production run is slated to be limited to just 50 bikes, with the potential for expanded offerings next year.

From today, the 25th of January 2018, the limited edition, 50 units, numbered and signed KALK bikes, is open for pre order bookings. The limited pre batch has a number of unique features, where a majority of alloy parts are CNC machined, together with the plastic parts being made in carbon fiber and painted. Ordered bikes will be delivered during summer 2018, starting from mid June.

The KALK model, is a first among a number of models to come. The focus here has been off-road performance and innovation. As there weren’t anything off-the shelf to support the category, every single component had to be developed from an empty sheet to support the intended level of quality and durability. The sizing, the geometry and engineering of axles, hubs, rims, the cockpit and suspension, as well as building and customizing the different parts of the drivetrain, together with developing a whole new chassis; having led to numerous patent pendings.

The CAKE KALK bike, built for light off-road performance, uses an industrial standard IPM motor, customized for CAKE and made in Europe.

It’s a 15 kW mid motor, powered by a 51.8 Volt, 50Ah battery for torque and range, conducted by specifically developed and tuned software, for the controller and dynamic performance. With the intention of simplicity, promoting easiness in terms of riding as well as maintenance, it´s a light bike weighing in at sub 70 kilos, using a single pivot direct drive, reducing the number of heavy and moving parts. The suspension is specifically developed, by Öhlins supporting the category of hi performance at minimum weight. Nothing has been left aside and every part including axles, hubs, cockpit, sprockets and even the tires (to minimize wear and footprint of trails being used), have been explicitly designed and engineered for the ultimate experience.

The light and snappy ride, with it´s focus on off and on trail riding, in the outback, means that its main character is about torque and acceleration, while providing a quiet gliding and surfy experience. Thanks to it’s digital pre setting it´ll let anyone fly at their own level.