Hands-on: Nintendo Labo offers a comprehensive look into the future of DIY toys

Following early January’s unveil of the latest games DLC Nintendo would be bringing to its consoles, the company also launched a surprising new accessory to the Switch. Nintendo Labo — a series of cardboard add-ons meant to emphasize DIY creations — was debuted to a lot of skepticism, but after finally getting our hands on the unique new system, we can say it’s worth more than the cardboard it’s printed on.

Toy Fair New York was over weekend, and we were lucky enough to get a hands-on look with the latest addition Nintendo would be bringing to the Switch, Labo. For those unfamiliar, Nintendo Labo is a series of cardboard accessories that you can assemble and are backed by corresponding mini-games for the Switch.

During our hands-on time we were able to play around with both the Variety kit and the Robot kit, both of which were compelling takes on a STEM-oriented DIY toy can be. 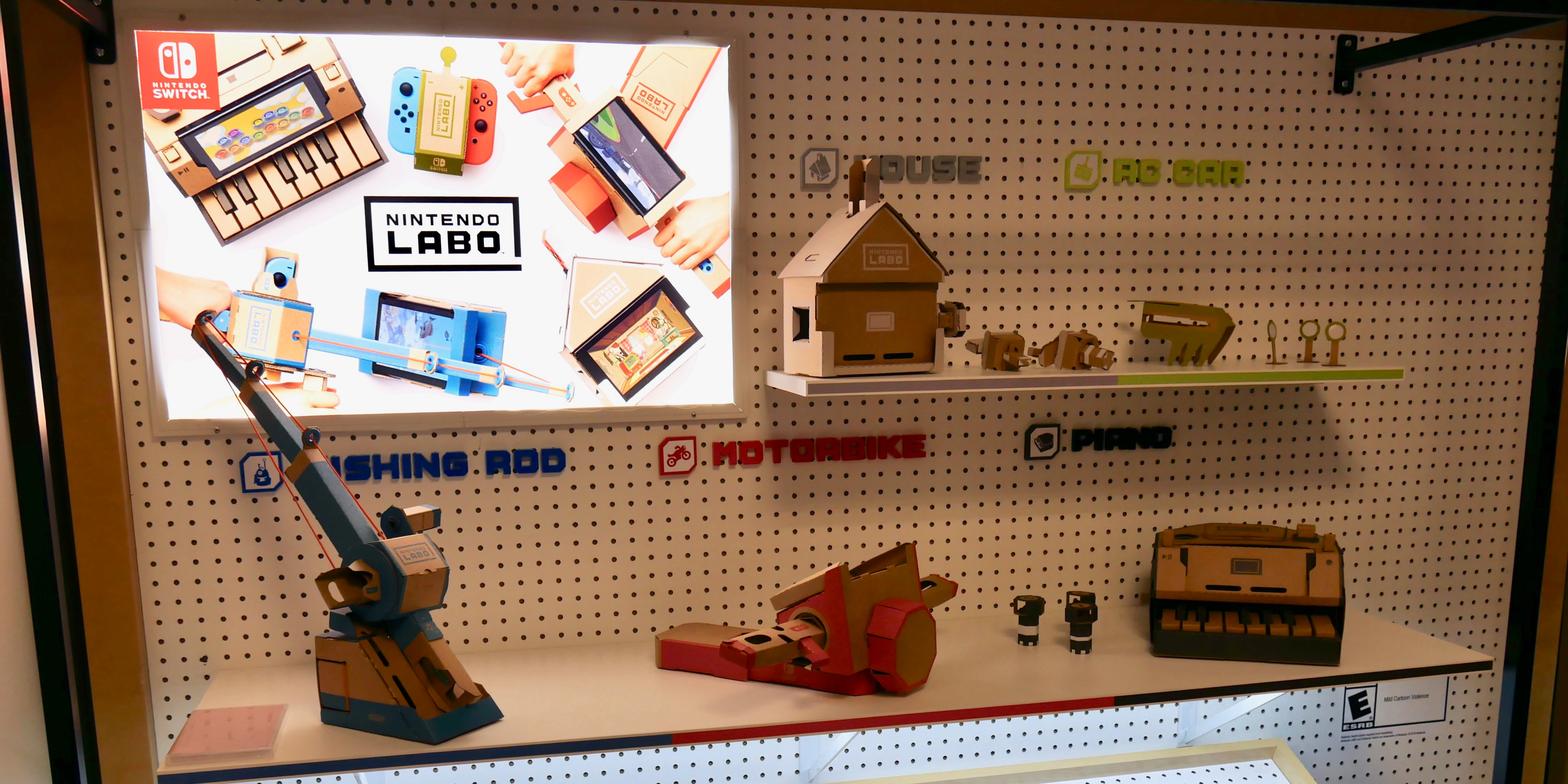 As the name suggests, the Labo Variety kit comes packed with 5 different builds: 2 RC cars, a Fishing Rod, Piano, Motorbike and house. Each ones pairs with its own companion game that utilizes the cardboard creations in their own unique ways.

We only got time with the first 4 during our hands-on session, and each one came packed with more features than we could have imagined from the brief glimpses we’d gotten before.

The fishing rod lets you dive into the sea to catch a variety of fish and ocean life, as well as create your very own fish thanks to the Switch Joy-Con’s IR camera. Mounting the Motorbike game pits you against other racers to clock the best time and even lets you design your own tracks. The 13-key piano lets you play, record and edit your own music. You can choose between traditional notes alongside some other wacky sounds, my favorite being scaled cat noises. 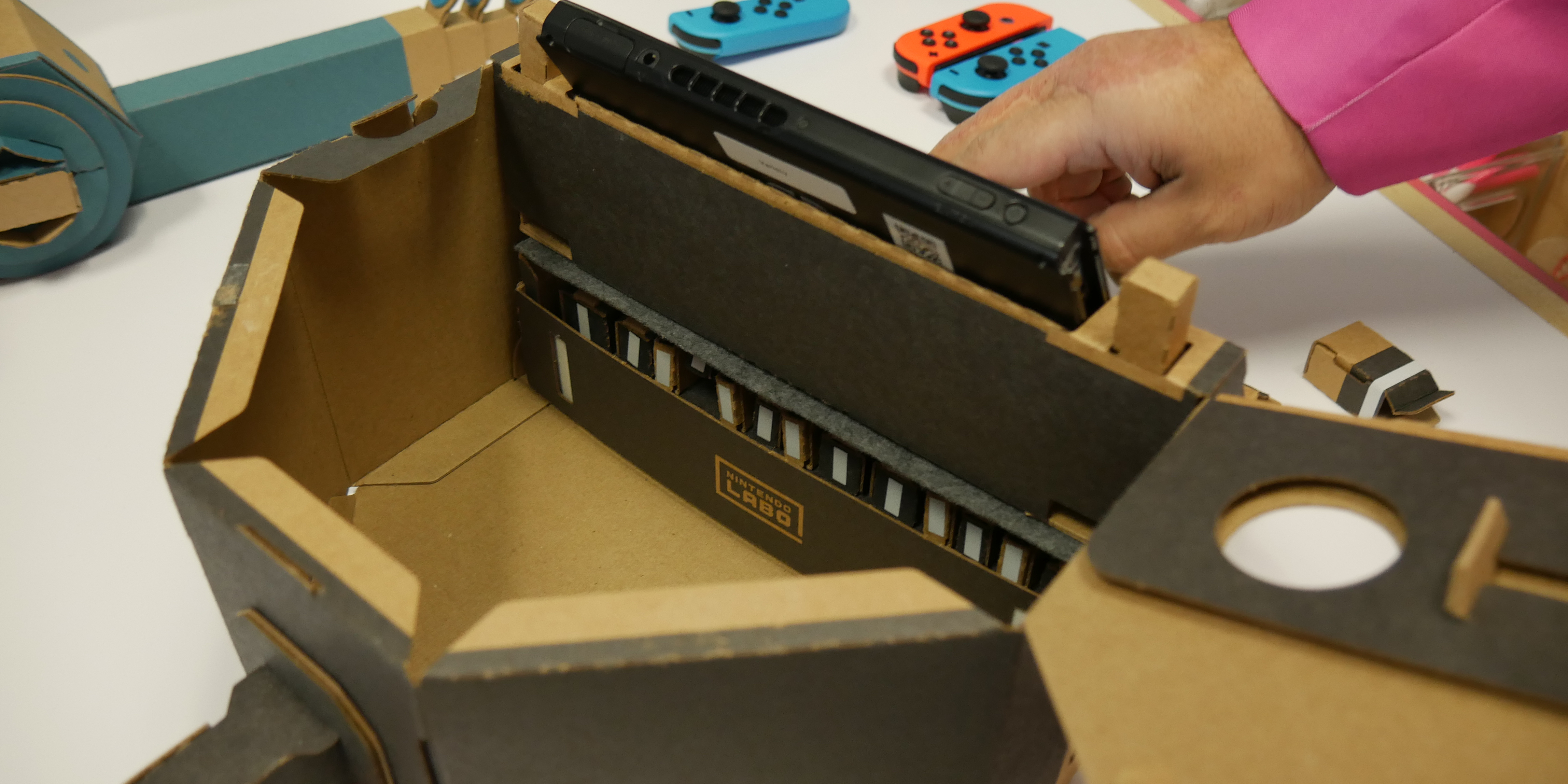 The RC Car was certainly the most basic of the creations, but its software was arguably the most intriguing. Its standard mode lets you drive the car via the Switch’s touchscreen, but diving in offers more intricate control over your cardboard racer. You can change the vibration frequencies, play with the night vision camera and awesomely enough, allow the car to autonomously follow targets with its tracking software.

Motion controls in the Variety Kit are plentiful and used in such excellent ways that are reminiscent of the Wii days. Polished UI and cute animations round out the software side of things, making it a unique experience only Nintendo could hope for. 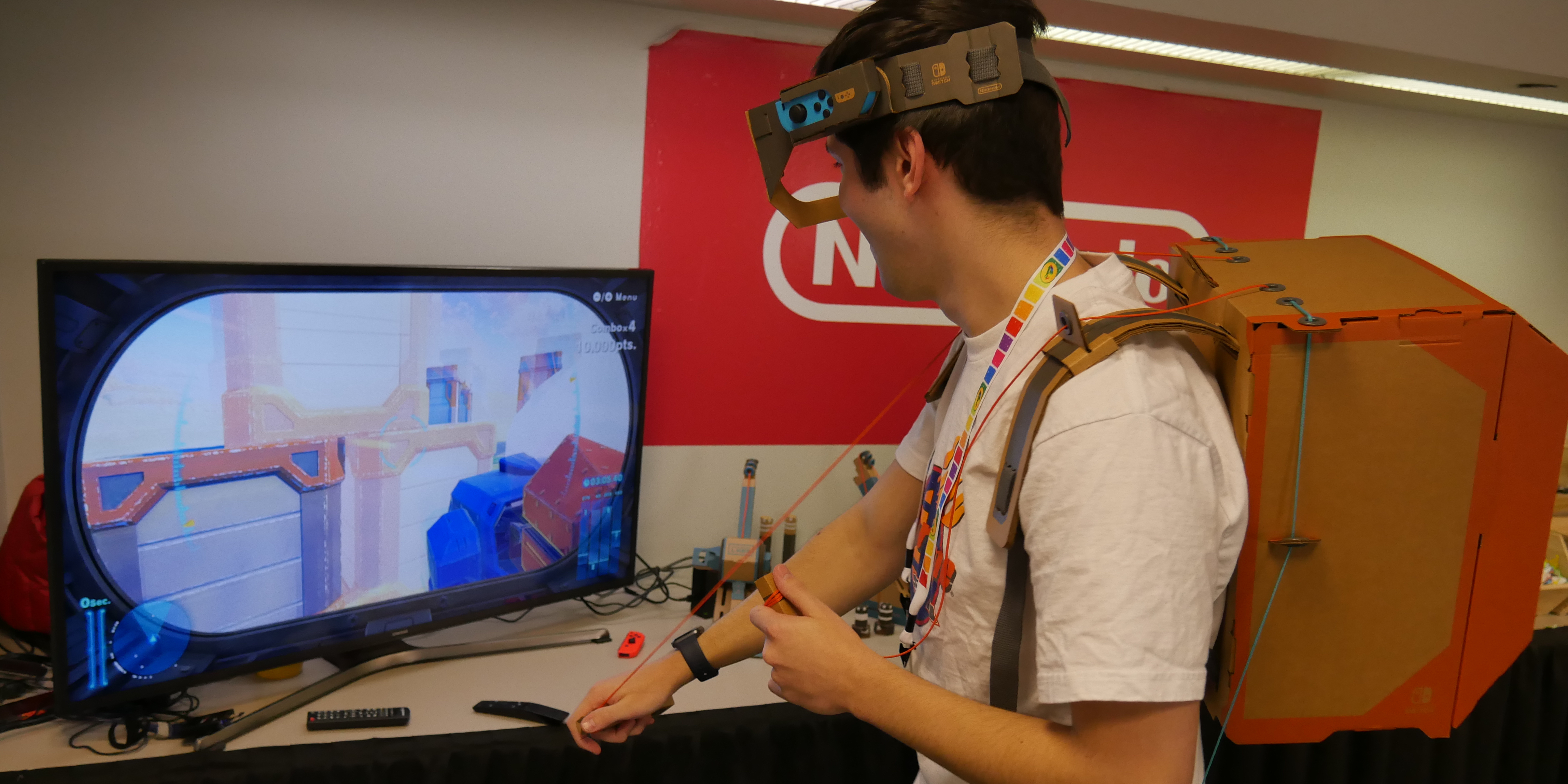 But as impressed as I was with the Variety kit, it was the second of the two cardboard sets that I was most excited to finally put to the test. The Robot Kit is centered around a backpack-type creation that houses a series of pulleys, that in effect, allows you to control a fighting robot by punching, crouching, walking and swaying.

Tied into the backpack are 2 cables that lead to each of your hands, and 2 for your feet. Getting set up took a few minutes, but it wasn’t inherently complicated. The controls respond incredibly well for being made of cardboard and rope. It took a little getting used to, but even younger gamers should have no issues picking up the controls quickly.

On the software side, the kit’s main game is based around causing as much mayhem as you can in a city by either stomping, punching or shooting. Racking up a new high score isn’t always an easy feat, but along the way you’ll unlock new weapons and abilities. If you happen to have 2 Robot Kits, you and a friend can go head to head in a split-screen battle.

Even though both Labo kits are made almost entirely out of cardboard, there’s so much more than meets the eye for Nintendo’s cardboard accessories. Some extremely wild and flat-out ingenious techniques are employed to add structure, sound, tension and functionality to the kits that I couldn’t help but marvel over.

So many times throughout my time constructing the fishing rod, I was blown away at how intricate these creations could be. There was one point pretty far along the build where one of the Nintendo reps had me spin the reel, resulting in a pretty minuscule amount of noise. But then I inserted an extra piece of cardboard on the handle, which added the most satisfying click when trying to reel in a catch. It’s also immensely worth noting that all of the instructions are rendered in real time. So if there’s one step that’s just really throwing you off, it’s easy to zoom in, spin the build around and take a peak at just any angle you can think of. Both on-screen and Joy-Con controls allow you to move forward through the instructions as well.

Based on just the Fishing Rod build, I’d say that the variety kit stacks up to at least 3 or 4 hours of assembly time, which is way longer than I had originally thought. 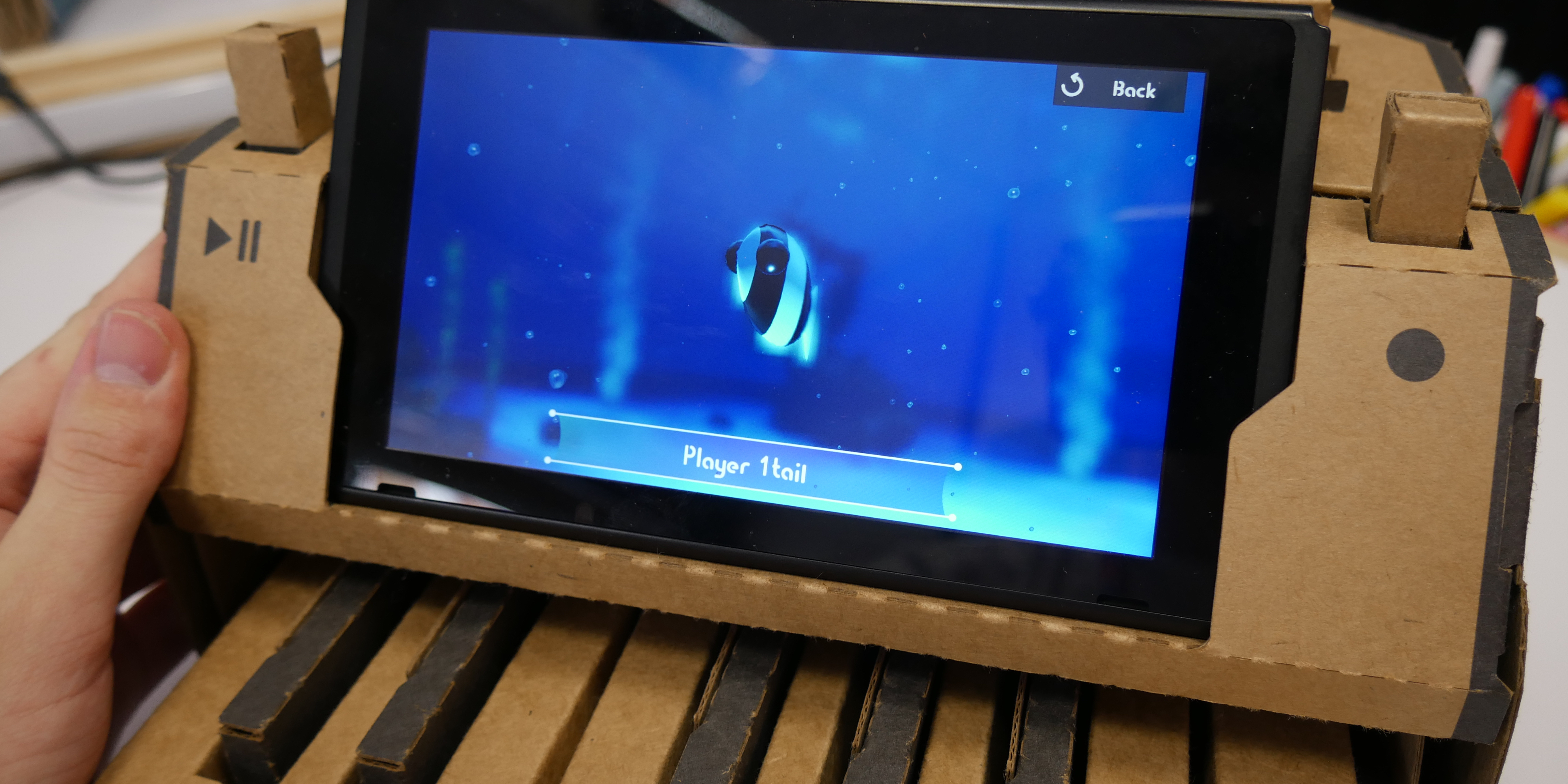 Since Nintendo Labo was announced back in January, I’ve seen the same two questions  asked over and over: how will they hold up when enjoyed by adults, and secondly, what’s the replay value like?

So despite being made of cardboard, the Labo kits can definitely hold their own. The intricate folding techniques add a significant amount of sturdiness, and as long you’re not actively tearing it apart, should survive most play sessions. On the off chance that your kids (or even you) plan to be brutal with it, Nintendo did say that ll be offering replacement pieces — but we’re not sure when or how that’ll be rolling out.

And believe me, I had my hesitations too. When donning the Robot Labo kit, I was pretty concerned I’d break it. But after a minute of holding back, one of the Nintendo reps reassured me that I could really give it my all; and to my surprise, it held up just fine.

Replay value is something I’m not able to speak about in as much detail. What I can say from my brief hands-on time is that it appears as though the software backing Labo is just as extensive as the cardboard creations themselves.

While the big draw is in fact to assemble and customize the accessories, the bundled content is really substantial all-around. Among the most notable are the ability to record your own songs with a music-editing studio, making your own fish using the Joy-Cons IR camera and a progression system to unlock new moves and attacks for your robot. 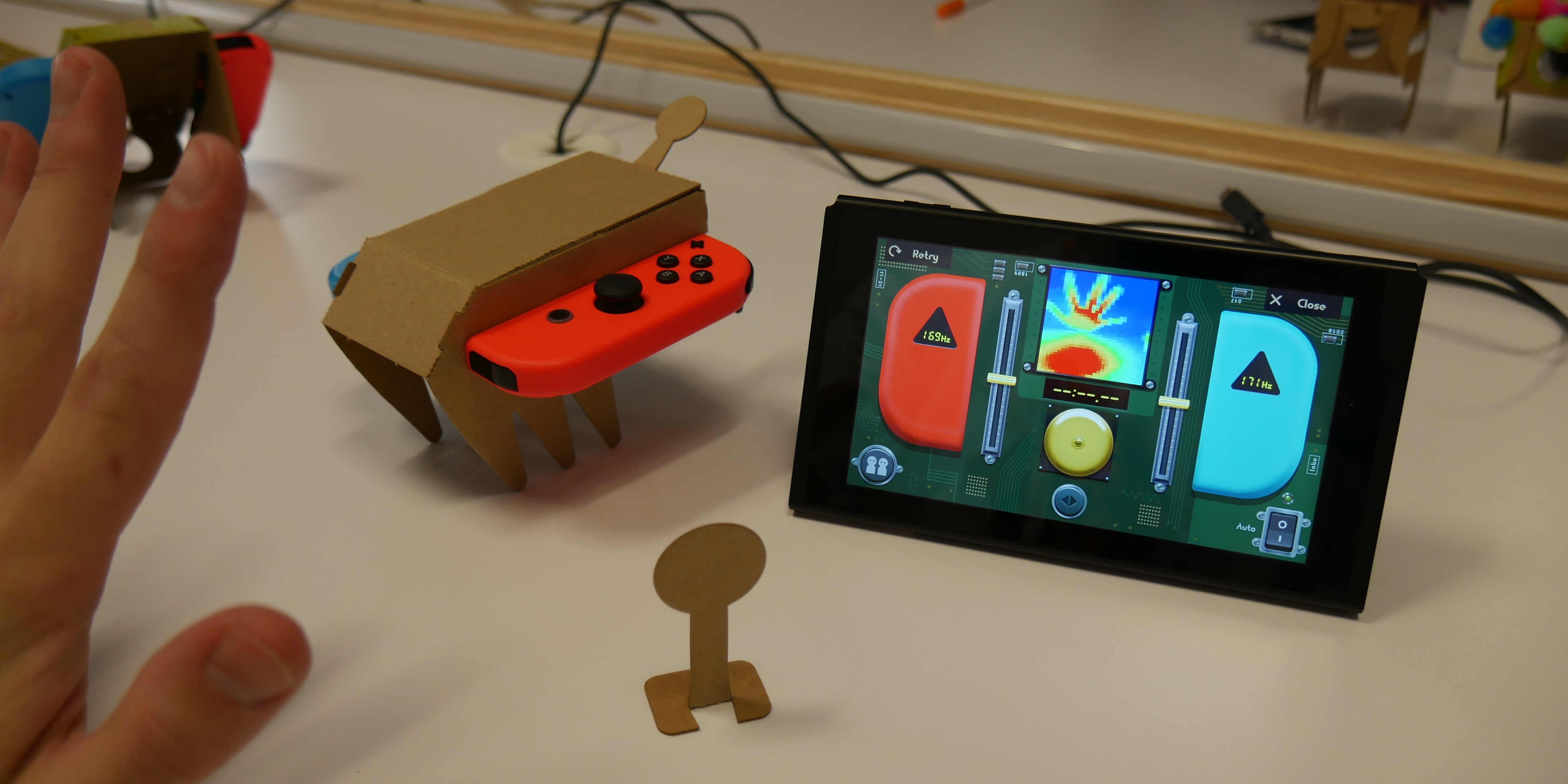 The last thing that Nintendo showed us was Toy-Con Garage, it’s more secretive companion software to the Labo kits. Garage is Nintendo’s solution to teaching programming foundations, which it does through a streamlined interface similar to other drag and drop coding programs. We were only shown a taste of what would be available at launch, but our suspicions from the end of January seemed to be correct; a large set of triggers and actions, if not all of them, will be able to be added into your own creations.

And to assist with the creative process, Toy-Con Garage includes the base ‘code’ to show off how each kit functions. This makes it easy to convert the fishing rod Toy-Con into a music maker, control the RC car with the motor bike and more.

I’m really impressed with what they’ve shown so far of Toy-Con Garage, and by the looks of it, Nintendo is putting in a lot of creative effort into making sure it provides a first-rate software experience to go along with Labo’s phenomenal cardboard creations. 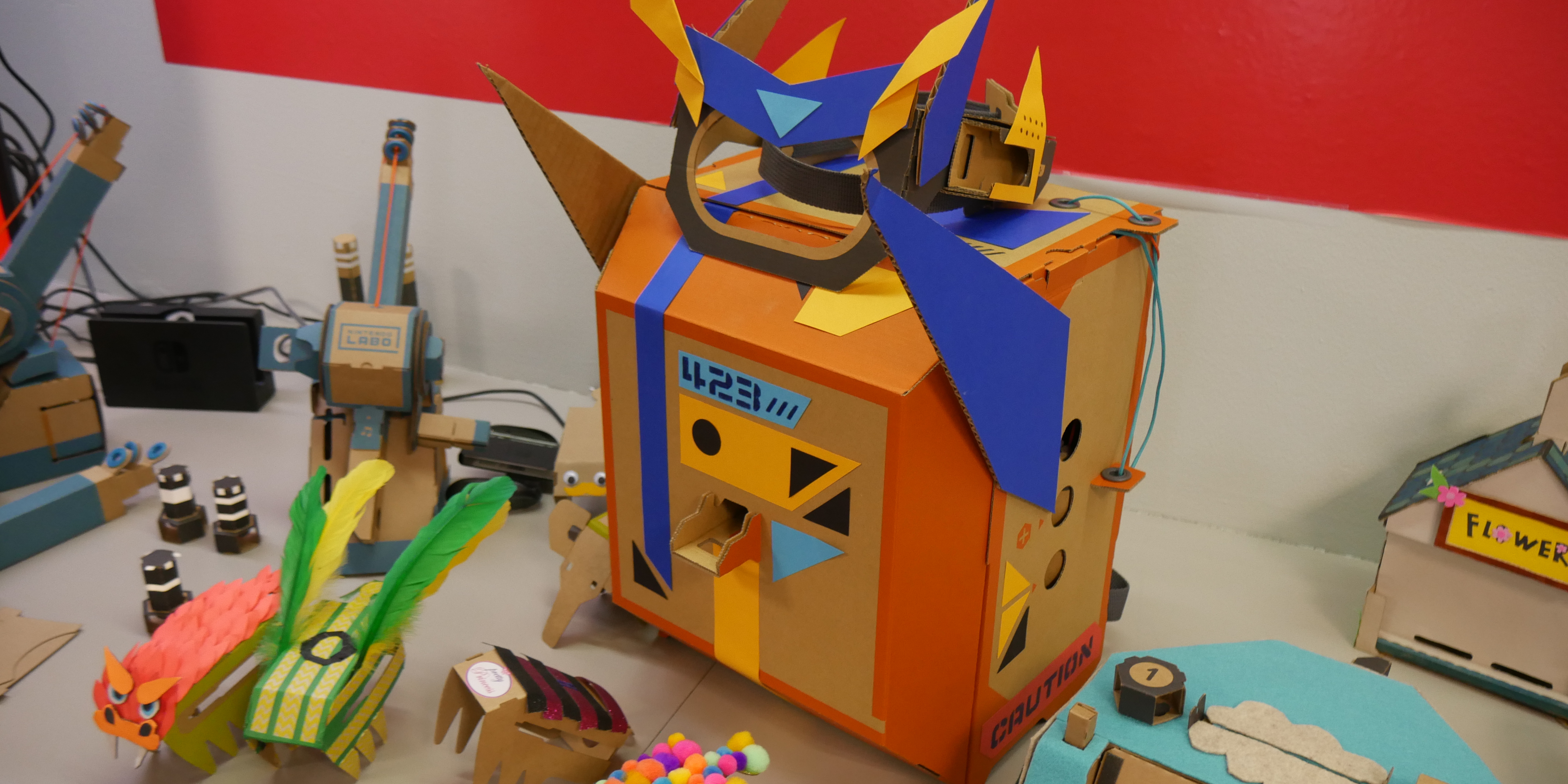 Across the board, I’m very impressed with my initial time with both of the Labo kits. Both kits pack a substantial amount of features and functionality capture the same sense of wonder I got from the Switch, and I’d be shocked if Labo wasn’t a big hit for Nintendo down the road.

We’ll be doing a full review once Nintendo Labo officially launches on April 20th, but for now you can preorder the kits yourself. Without spending more time on the kits, it’s hard to come to a full conclusion on whether or not you should pick them up on launch day. But for me, the only question still in my mind is which of the 2 kits I’ll be buying first.

Pre-order the Nintendo Labo Variety Kit for $69.99 at Amazon

Pre-order the Nintendo Labo Robot Kit for $79.99 at Amazon