The Flyride personal watercraft puts you in the air, doing barrel rolls and more 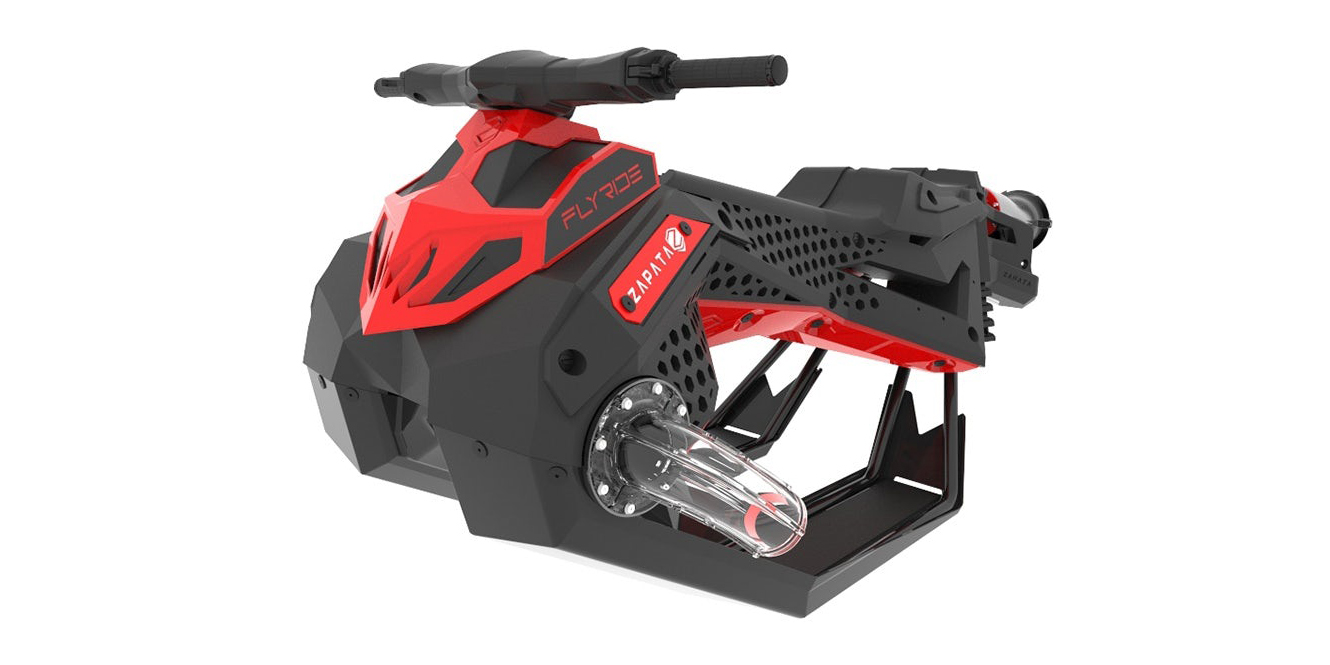 Looking like it’s straight out of a Marvel film, the Flyride personal watercraft takes hydroflight to new levels (quite literally). Made popular in recent years, this water-bound sport leverages the energy created by an accompanying jet ski to propel users into the air. The problem is, it’s incredibly difficult to stay level once you’re up in the air. Flyride looks to simplify this with its unique motorcycle-inspired watercraft.

New advancements in computer-aided flight control and gyro stabilization promise an easier to learn experience for all. Simply put, you have to see this thing in action. Head below for more details and a video further detailing Flyride.

Flyride was designed to sit like a small quad bike, with the ability to connect to just about any jet ski. Water runs up the included hose and jet capture system and propels the ride into the air. One particularly notable aspect of Flyride is its ability to handle two riders at once. When plugged into a standard 300-horsepower jet ski, it will take a cargo load of up to 440-pounds into the air.

Where Zapata’s Flyride system really shines is its self-balancing technology. As I mentioned above, one of the most difficult aspects of this activity is achieving a balanced stance that allows riders to be able to theoretically stay in the air longer. Thanks to a newly designed set of internal sensors, the riders balance is constantly adjusted for a smooth experience.

Zapata has made history in the world of personal aviation with the development of advanced stabilization systems utilized in the groundbreaking Flyboard Air™ and EZ-Fly™ personal aviation platforms. Zapata will now change the world of recreational water sports by applying that same technology to hydroflight. This convergence of Zapata’s engineering and software innovation is what will set Flyride™ and Zapata apart from its imitators and bring the joy of hydroflight to wide audiences.

One of the coolest features is the barrel roll button that allows Flyride to quickly take this machine on a 360-degree roll. This is a popular trick on the traditional skateboard-style hoverboard that takes quite a bit of mastery. Essentially, Zapata has figured out a way to automate this movement, making it accessible to all.

The Flyride is available for pre-order today with a $6,000 price tag, with an estimated March ship date. You can learn additional information about ordering, and find dealers on this landing page.

Zapata Flyride: Hit the barrel roll button on a flying 2-up boatercycle

Before he found international fame zooming around on a Green Goblin-style jet platform, Franky Zapata was a world jet-ski champion with a bright idea. The water jet thrust that propelled his jet skis, he thought, could easily be run through a hose and attached directly to a human.

The result was his original Flyboard, which strapped powerful water jets to your feet (and originally your arms, too), and was capable of rocketing people with strong core muscles up to 9 meters (30 ft) above the surface of the water using the massive power of today’s jet ski motors.The flyboard gave rise to the Hoverboard, which added a surfing-style element by vectoring the thrust off the back of a snowboard-sized board so you could carve waves or rise up in the air and do crazy flips. Zapata also built a jetpack style arrangement that offered similar flight dynamics that were a bit less demanding on the body.

Now there’s the Flyride, which takes the tech to a new level.

The Flyride is a 2-seater device that looks like the shell of a small quad bike. It attaches to just about any jet ski using a tailored hose and jet capture system, and the water runs up the middle of the bike and is forced out through twin steerable jets at the front. Plugged in to a 300-horsepower jet ski, it’ll take up to 200 kg (440 lb) of rider and passenger.

But the kicker here is Zapata’s first self-balancing tech, a set of internal sensors and computers that micro-adjust to keep the bike upright whatever the rider’s doing, so it should be a very accessible experience that most people can enjoy. Four selectable flight modes cater for kids right up to advanced users, there’s throttle assistance and an automated takeoff routine if you’re leery of managing that yourself.

If a self-balancing water hoverbike sounds a bit dull compared to mastering the flyboard, the Flyride has its own special sauce built in too – a barrel roll button that becomes active once you’ve got enough altitude. Pressing it spins you wildly around before returning you to vertical, and looks like a pretty crazy ride. In Advanced mode, you can spin the thing twice – and that’ll really mess your hair up.

Beyond that, Zapata says it handles more or less like a flying jet ski, and that it’s perfectly intuitive to get around on. You can take off or land the thing right on the beach if you’ve got a steady hand, and since it weighs only 33kg (72 lb) it’ll be easy for two people to lift it and throw it in the back of a van.

The Flyride is on sale now, for €7,200 (US$8,600) including the hoses and attachments to stick it onto the jet ski of your choice.